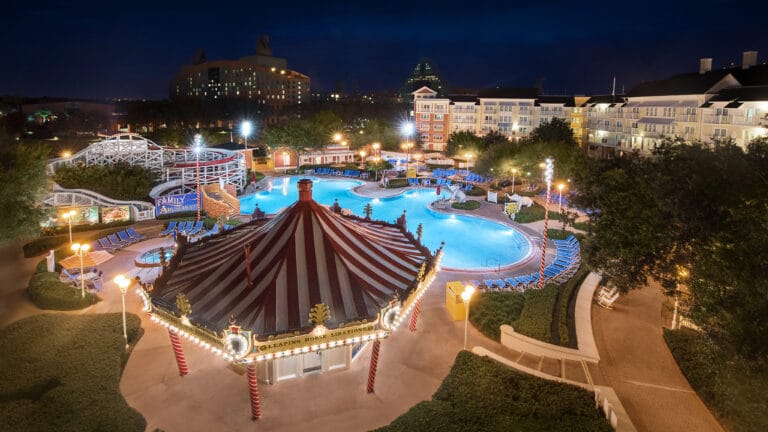 Although there are many great Disney World bars to enjoy, there’s just something about sipping on a boozy beverage while gazing out over a glistening pool that hits different. It’s like the relaxation intensifies (or maybe that’s just the Central Florida sun making us sleepy).

So, read on as we toast the best pool bars at Disney World, and share a few of our recommendations.

Looking for a snack and some shade while watching your little ones splash about? Searching for a no-reservations-needed spot for post-theme-park dinner and drinks? Consider giving one of Walt Disney World’s many pool bars a try.

However, you can’t just waltz up to any old poolside drink stand at The Most Magical Place on Earth and expect expertly mixed cocktails and something that isn’t an uninspiring soft pretzel or lackluster nachos. Luckily, we’re here to help. 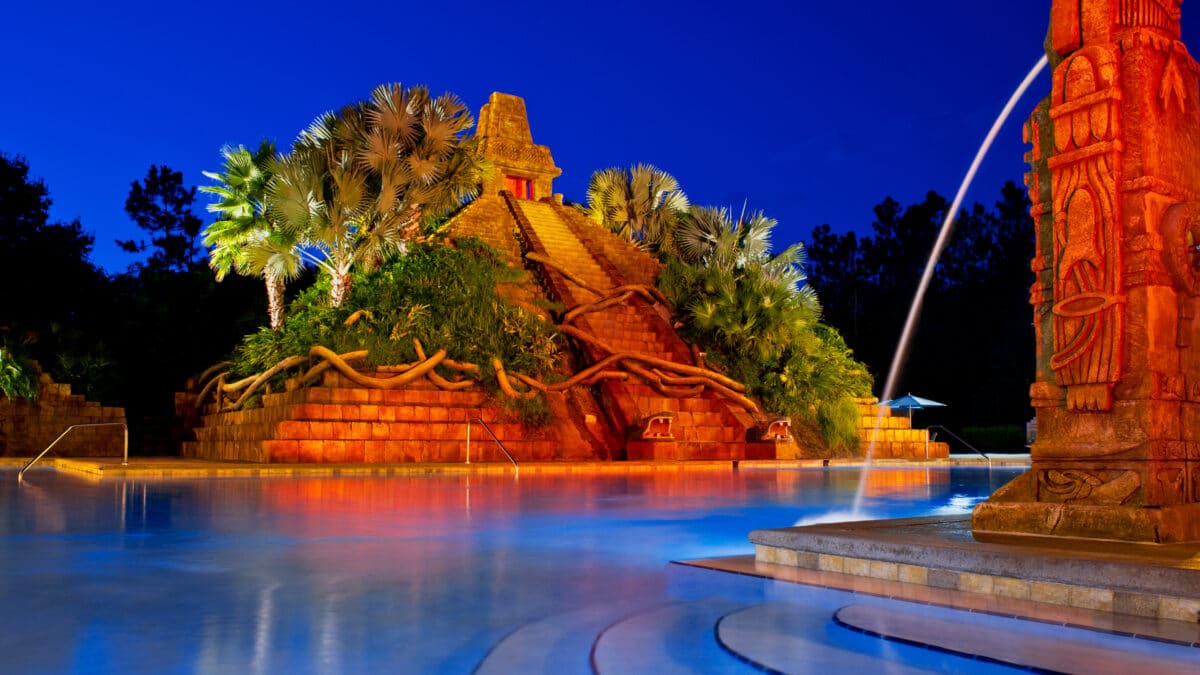 Nestled next to some of the best pools at Disney World, the aquatic outposts on this list take the term “watering hole” seriously. Not just a handful of fruity, frozen concoctions and a beer or two, each boasts a pretty sizeable drink menu overflowing with alcoholic and non-alcoholic beverages of all sorts. To really soak up the spirit of the place, be sure to try one of the bar’s specialty drinks rather cookie-cutter sips such as the ubiquitous – and, admittedly, delicious – Piña CoLAVA.

What’s more, many even serve light bites and lunch-y dishes that are a cut above the rest, making them a respectable substitute for other hotel restaurants at Disney World. And best of all, unlike their sit-down counterparts, you don’t even need a reservation.

So, without any further ado, here are our picks for the best Disney World pool bars.

If you’re on the hunt for a place to snap some selfies of your vacation for social media, then look no further – Bar Riva at Disney’s Riviera Resort is for you. From its cerulean-hued tiles to a vivid mural of the European coastline all along one wall, it’s a definite vibe. You may even fool people into thinking you were on holiday in the Côte d’Azur rather than Orlando.

Europeans know a thing or two about good food. So, it’s no surprise that Bar Riva houses some of the best of any Disney pool bars, including sophisticated bar food, classy cocktails and an impressive wine menu. 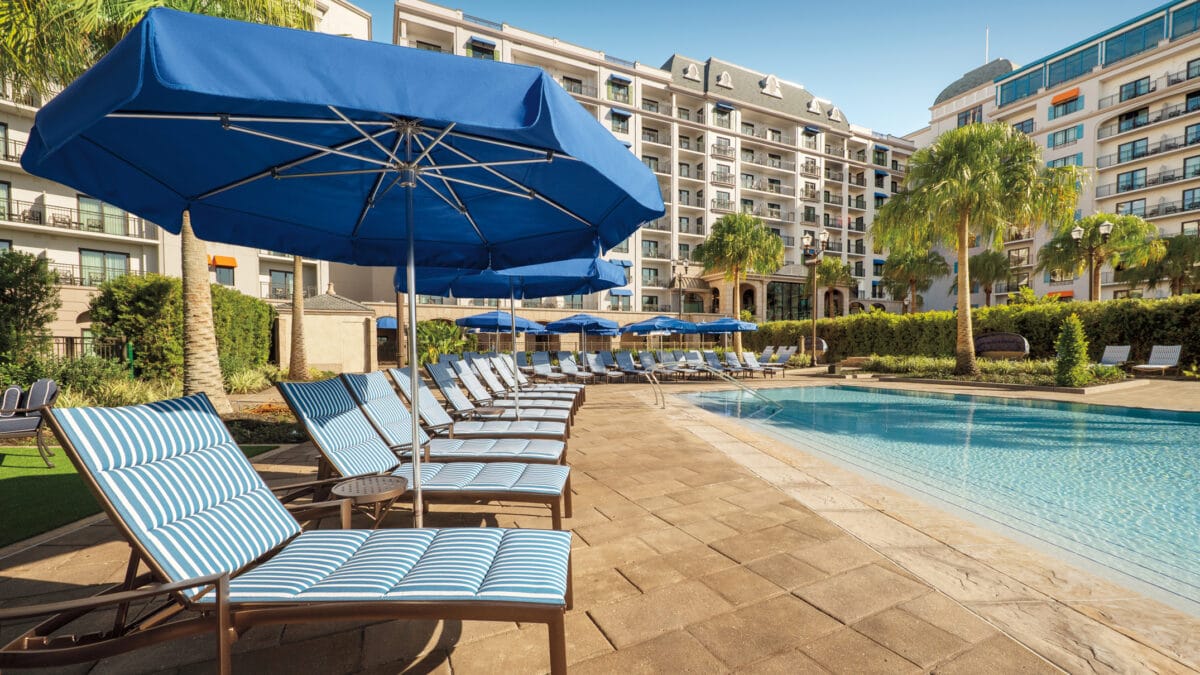 In short, it’s a dream for Instagrammers and foodies alike. (And that’s a good thing because the nearby Disney Riviera pool is decidedly meh.) While you’re there, tuck into decadent dishes like Confit Chicken Wings, Baked Brie in Puff Pastry with fruit preserves or a Niçoise Salad served with seared tuna. Then, wash it all down with a glass of French or Italian wine or a European-inspired cocktail – and some Tiramisu, of course.

It wouldn’t be a vacation in the tropics without something icy, fruity and refreshing in your hand. Fortunately, along with the must-visit Trader Sam’s Grog Grotto, you’ll also find several places at Disney’s Polynesian Village Resort that fit the bill.

When it comes to both the view and convenience, you’d be hard-pressed to find a pool bar at Disney World with a better location than the Polynesian’s Barefoot Pool Bar. Looking out over the Seven Seas Lagoon towards Cinderella Castle from right next to the Lava Pool, the bar is an excellent spot to unwind, no matter if you’re enjoying one of the best places to watch the Disney fireworks outside the parks or just sidling up for a mid-swim snack. 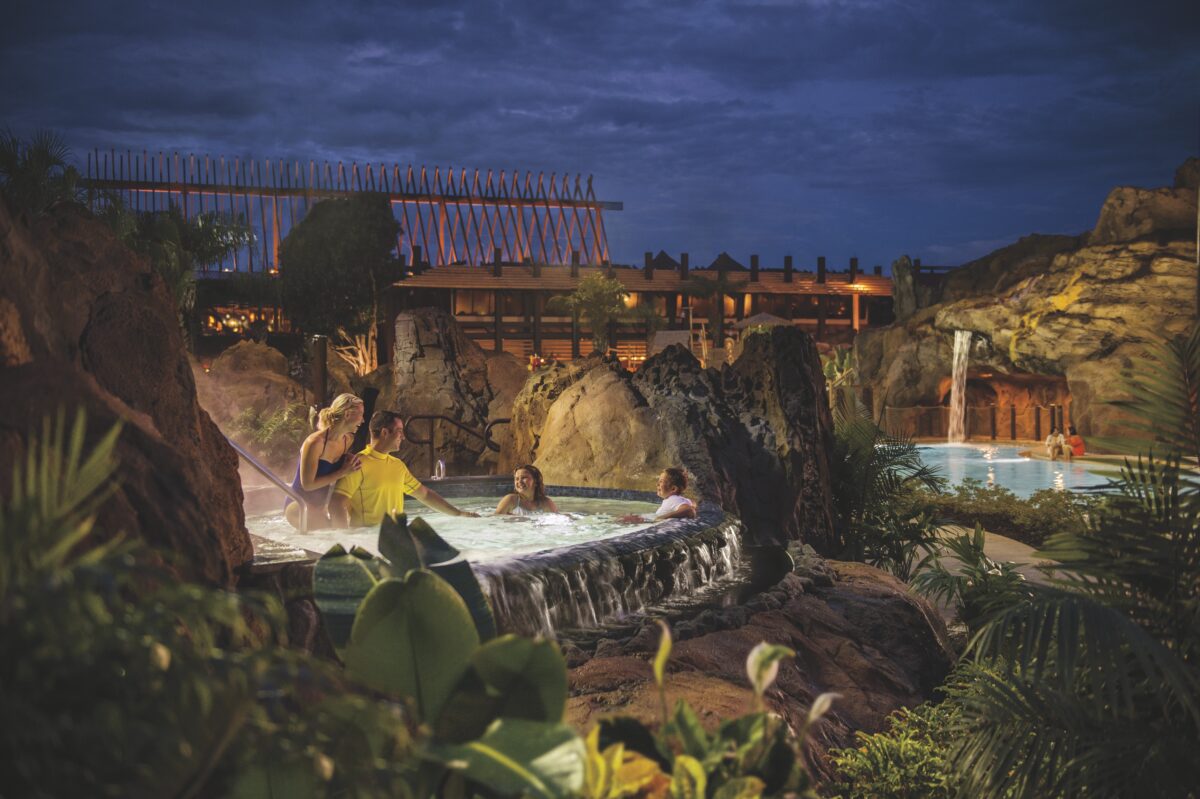 We like the classic Frozen Margarita, which gets a magical upgrade with the addition of lime-flavored DOLE Whip and a chili-lime rim, along with the bar’s many other sweet creations. As for food, don’t miss Barefoot Pool Bar’s selection of South Seas-inspired dishes, including fresh Sashimi with seaweed salad, Fried Wonton Chips with duck sauce for dipping and Malasadas, Portuguese-style doughnuts brightened with a passion fruit curd.

Just like a trip to the islands, Banana Cabana at Disney’s Caribbean Beach Resort is sure to leave you with a smile. Fresh off a renovation in 2017 and 2018, which saw the addition of beachy details like walls covered with colorful “reclaimed” wood and a steel-drum chandelier, this lively pool bar near the Fuentes del Morro Pool is worth a trip even if you aren’t going for a swim. 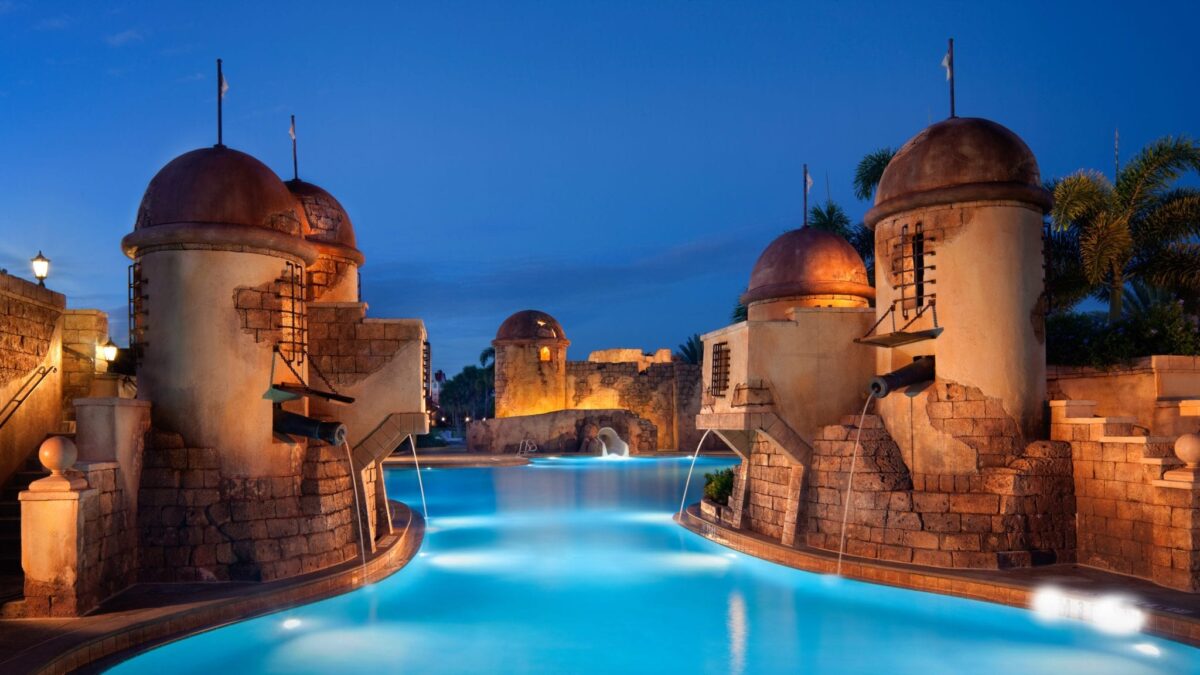 The menu, like the rest of the bar, is on island time, dishing up flavorful bar bites and beverages straight from the Caribbean and making for an undeniably fun place for a light lunch between swims on your resort day or nightcap after returning from the parks. Fuel up on Sebastian’s Salad topped with spicy jerk chicken, Caribbean Pull-Apart Rolls with guava butter and onion jam or the classic Cuban Sandwich, along with rum-filled cocktails worthy of a pirate like the bar’s namesake Banana Cabana.

Most of all, unlike some other Disney pool bars (including a few on our list), you can enjoy all of this without having to worry about where to sit. There’s plenty of shaded seating to go around.

Hoping to escape the hustle and bustle of the theme parks? Head to Disney’s Wilderness Lodge and Geyser Point Bar & Grill. Nestled on Bay Lake in between the Copper Creek Springs and Boulder Ridge Cove Pools, this open-air watering hole is a hotel pool bar on a whole other level.

While this rustic retreat is a fine place for bite after splashing around a bit, we actually like coming here just to eat, drink and hang out. Whether catching the game on the bar’s TVs, watching the resort’s resident geyser erupt, enjoying the Elegant Water Pageant as it floats by or simply enjoying some of the eatery’s hearty, Pacific Northwest-inspired offerings, there’s a lot to like here. 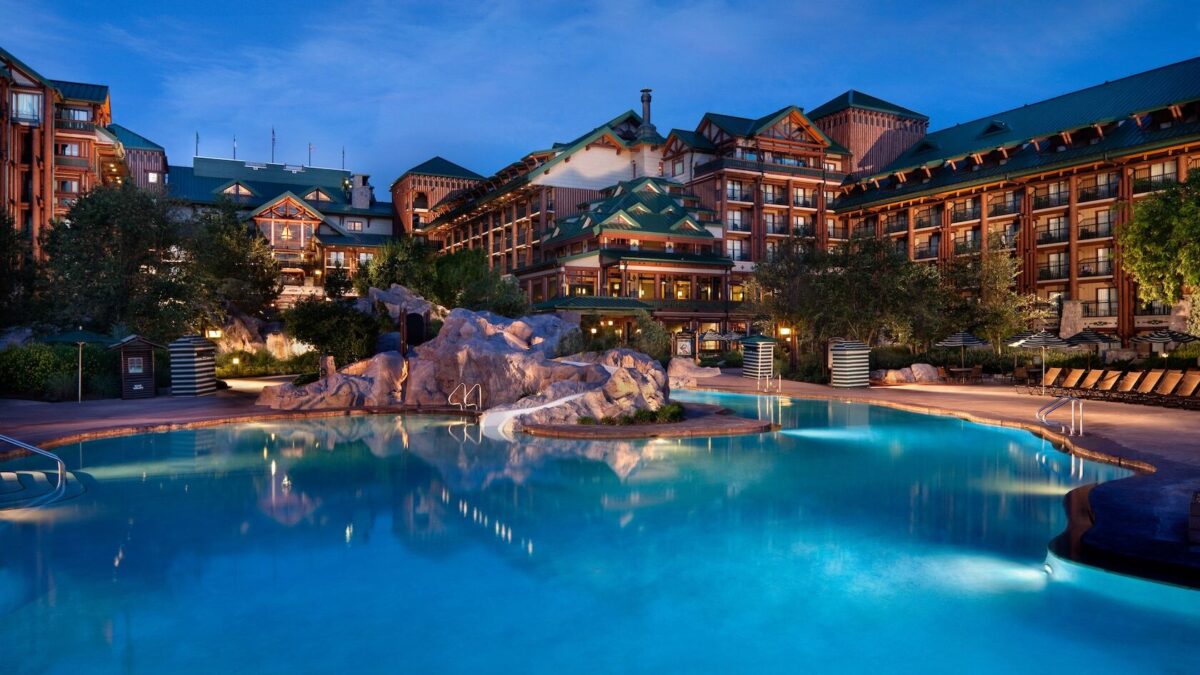 Dine on hearty fare that would be right at home in Oregon and Washington State, from Crispy Salmon Croquettes and a Bison Cheeseburger with marionberry sauce to Campfire Mousse and Apple Cider Sorbet. And don’t forget your glass of Washington wine or a cocktail starring Idaho vodka.

Stormalong Bay is, without a doubt, the best of the best pools at Disney World. So, it’s no wonder that Disney’s Yacht Club and Beach Club resorts are also home to not one but two (kind of) amazing pool bars.

Hurricane Hanna’s Waterside Bar & Grill is an oasis of shade, fan-fueled breezes and laidback food and drinks mere steps away from Stormalong Bay Pool’s lazy river. If you’re keeping up on the game, you can even check the score on the bar’s TV screens as you float past on your tube. While you’re there, indulge in the buttery Seafood Roll alongside a glass of Rosé. 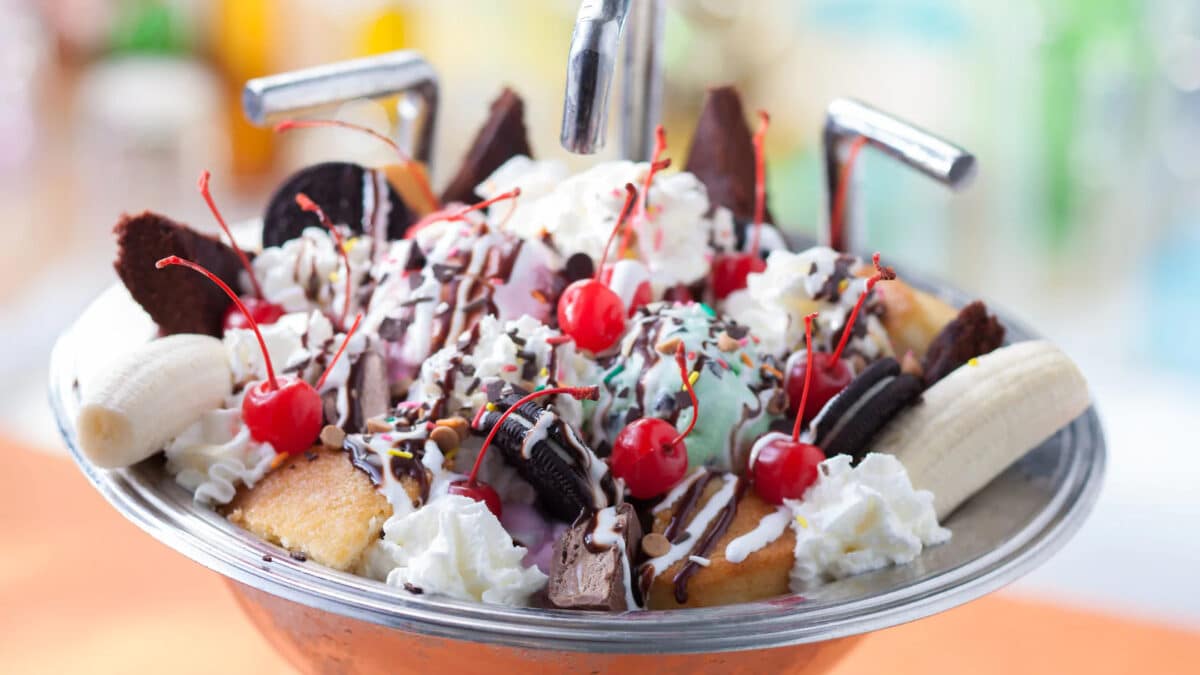 Ready to follow up with some dessert or in the mood for all-American diner classics instead? Mosey on over to the nearby Beaches & Cream Soda Shop. Ok sure, it’s not technically a pool bar, but it is right next door to this incredibly epic Disney pool. Savor palate-pleasing favorites like burgers, loaded tots and, of course, lots and lots of ice cream. The massive Kitchen Sink is a Disney institution.

The Grand Floridian Resort & Spa is Disney World’s premier hotel, boasting breathtaking views of Seven Seas Lagoon and some of Disney’s finest dining. As you can probably guess, there are also a couple of worthwhile pool bars at this luxurious Disney World hotel.

Steps away from the sand and the Grand Floridian’s Beach Pool, Beaches Pool Bar & Grill offers vaguely coastal cuisine, like decadent Lobster Sliders on fluffy brioche buns, as well stunning views of the water and Disney’s Contemporary Resort beyond.

Hanging out by the Courtyard Pool instead? The Courtyard Pool Bar dishes up an array of family-friendly food and entertainment. Snack on the Buffalo Chicken or Portobello Mushroom Wraps in between volleys at the ping-pong table or while watching the game on the bar’s pair of screens. 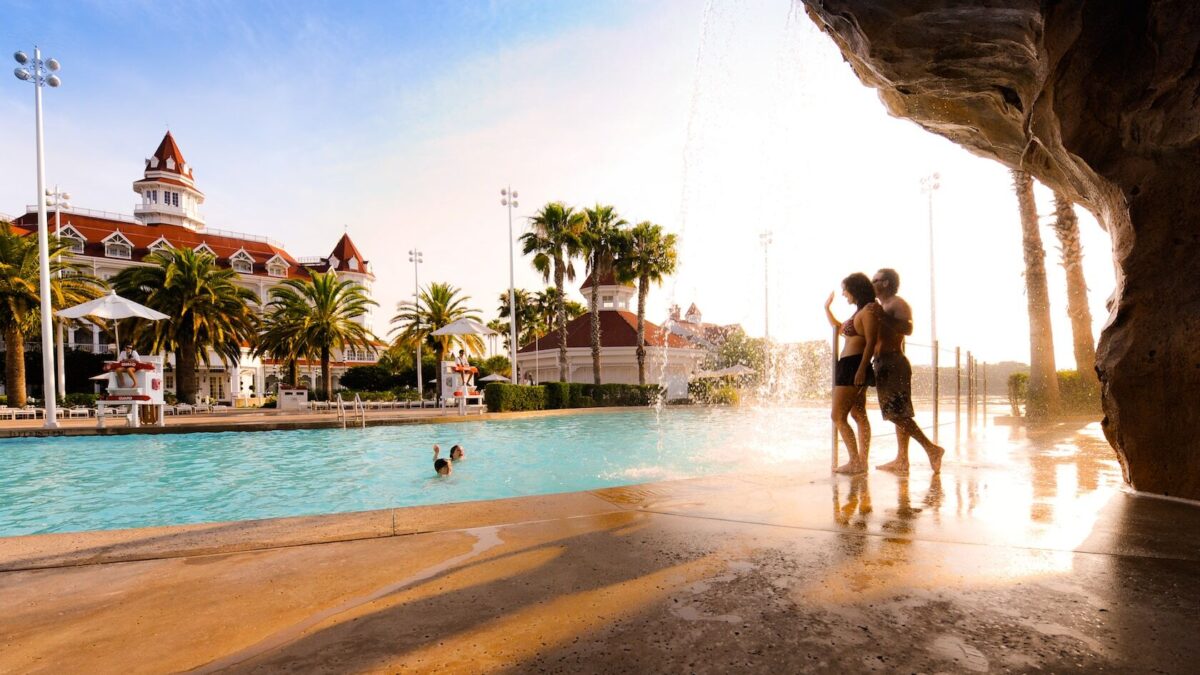 And although you can’t officially watch the Magic Kingdom fireworks from either of the bars, you can still enjoy the show with a drink in hand. Just pick something up from either spot then make your way to the hotel’s marina to watch the spectacular display. We recommend The St. Augustine, a citrusy concoction that’s basically sunshine – and Sunshine State vodka – in a cup.

While the name of this fine establishment means “water” in Swahili, you’ll find a whole lot more than just the wet stuff at Maji Pool Bar. Tucked back in Kidani Village at Disney’s Animal Kingdom Lodge near the Samawati Springs Pool, this pint-sized pub serves up some of the more unique offerings at Disney World’s many hotel pool bars.

Just like the sprawling resort is an ode to the wonders of Africa, down to the animals and architecture, so too is the Maji Pool Bar. While you will still find the usual Disney culinary suspects like salads, sandwiches and BBQ, those on offer here come with a surprising African-inspired twist. Think, a pulled pork Barbecue Sandwich drizzled with a smoky-sweet sauce made from Kenyan coffee or a Caesar Salad crowned with tandoori chicken. 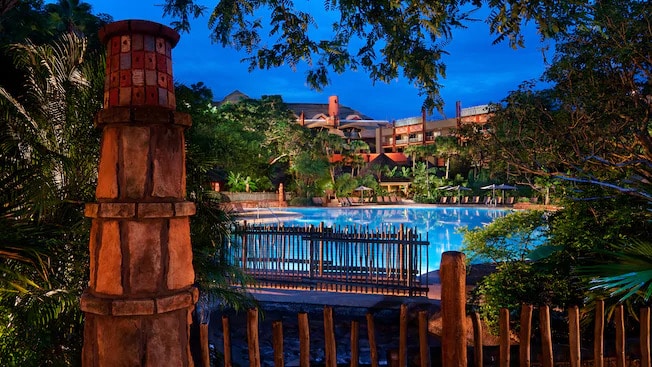 Finally, be sure to sample something from the bar’s extensive drink menu. Although you will find an assortment of domestic favorites, we recommend one of their several specialty beverages, including African wine and beer and cocktails featuring made with Amarula Cream Liqueur and other imported spirits. Then, once you have your drink, stroll over to the nearby savanna lookout to watch the wildlife wander past as you sip.

Whether enjoying brunch at Olivia’s Café or sweating it out in the lighthouse sauna near the Sandcastle Pool, Disney’s Old Key West Resort is a hidden gem of a hotel. When you’re done detoxing, get to re-toxing with a drink from Gurgling Suitcase.

Made with three kinds of rum, the tropical Turtle Krawl is sure to do the trick. While you’re there, you’ll also want to make room for food – dishes come straight from the Olivia’s Café kitchen. Go for the Conch Fritters with key lime mustard or crispy Southernmost Buttermilk Chicken.

Although you can’t exactly tell from all the pool bars at Disney World’s moderate and deluxe hotels on our list, you don’t need to spend a lot of money to enjoy tasty drinks and a fun atmosphere. Located at Disney’s Pop Century Resort near the Hippy Dippy Pool, Petals Pool Bar is a groovy place to relax with an adult beverage.

No food is available here, so don’t come hungry. That being said, there is a deliciously long drink menu featuring everything from sweet cocktails and sangria to beer and wine. Take your boozy brew of choice over to the bar’s ping-pong table for a little alcohol-fueled friendly competition. 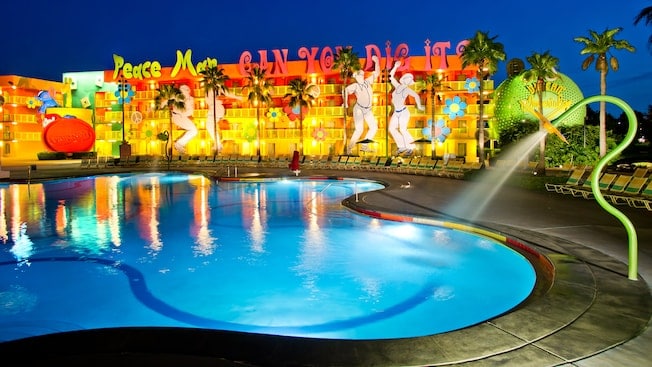 Of course, you don’t need to put on your swimsuit and bring your pool floaties to enjoy a refreshing beverage at Walt Disney World. Whether you are hanging out in the theme parks, shopping at Disney Springs or doing some resort hopping, there are tons of other amazing Disney bars throughout the Florida resort.

Hoping to spend less time in line and more time hanging out by the pool? Maximize your trip with our one-day plans for Magic Kingdom, Epcot, Hollywood Studios, and Animal Kingdom. Not enough space in your travel dining budget for all those yummy drinks and dishes? Save some cash with our discounted Walt Disney World tickets.

Do you like hanging out by the pool during your Disney vacations? Which Disney pool bars are your favorites? Let us know in the comments! 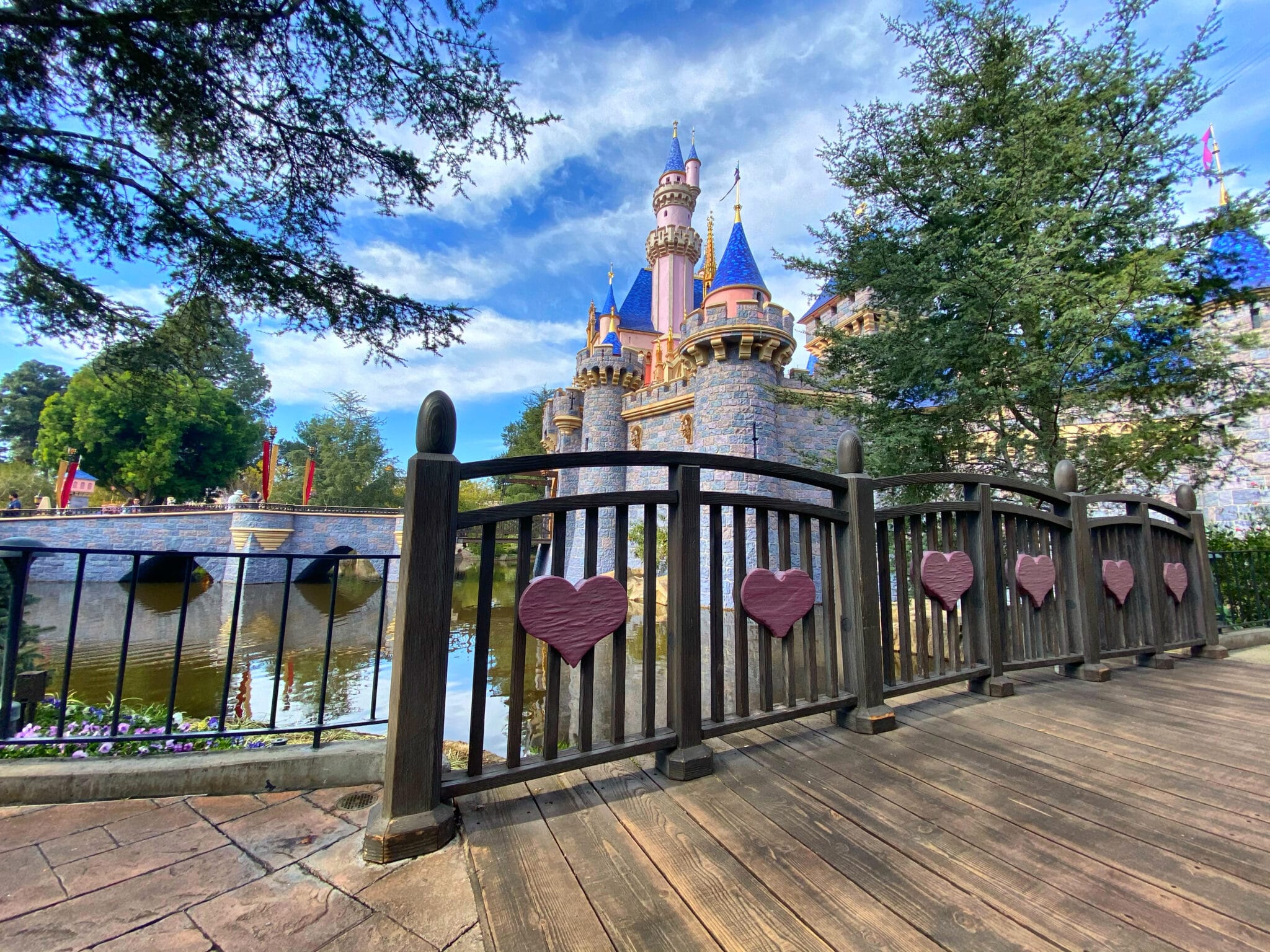