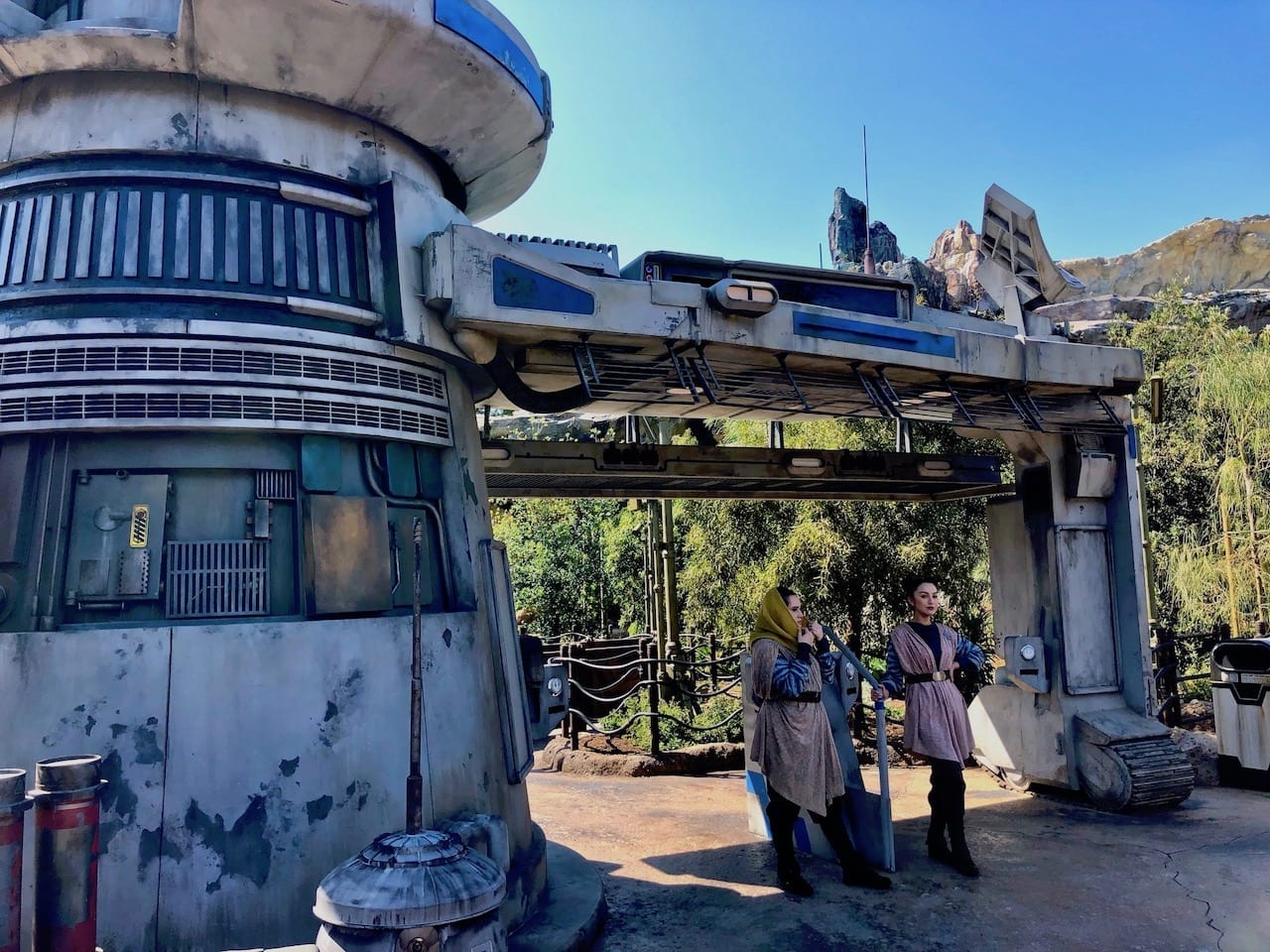 Yes it’s finally here! Star Wars: Rise of the Resistance has opened at Disney’s Hollywood Studios as of Dec. 5th, 2019. I’m writing this review about 45 minutes after having ridden it for the first time and I have to say, I’m still digesting everything! It was one crazy morning that started at 5:30am and a brisk walk to Hollywood Studios.

The park didn’t official open till 8am but guests could go in as soon as 5am or maybe earlier from my understanding. Once inside the park I immediately entered the Virtual Queue (more on this in a minute) to ensure I received a boarding time and a chance to experience Star Wars: Rise of the Resistance. 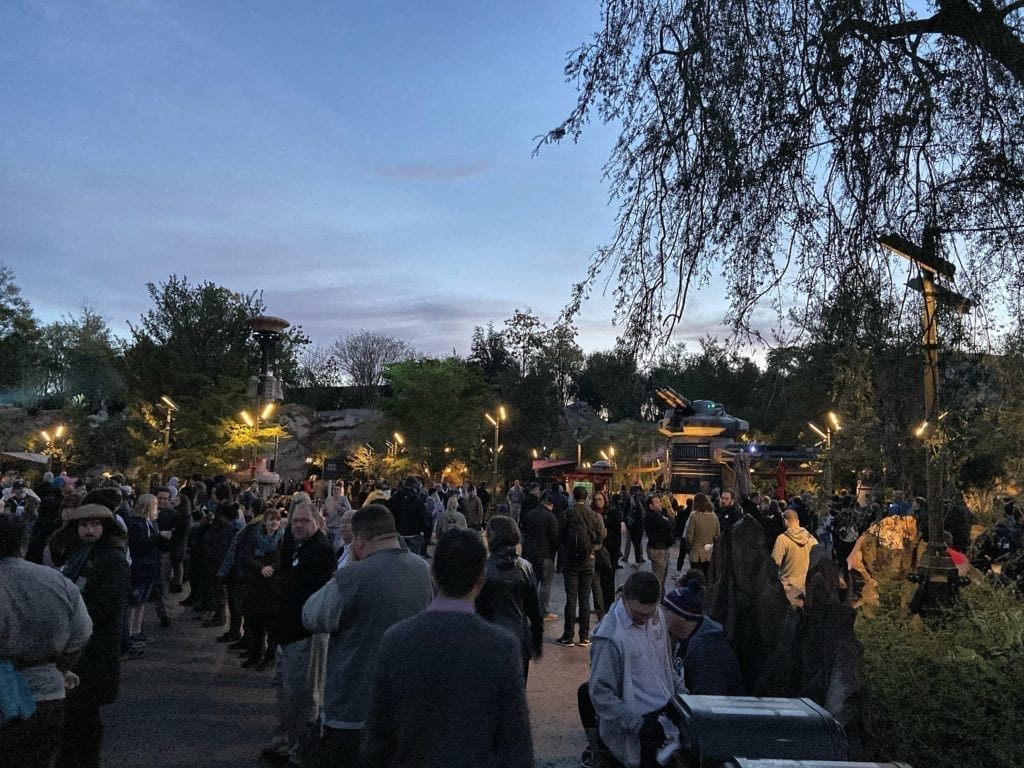 Since the attraction wasn’t quite boarding yet I went over to Event Merchandise and picked up some cool MagicBands that they had for the opening of the attraction. They of course had a whole list of stuff including t-shirts, caps, pins and more.

Once I had them sent off to my hotel room I wandered around for just a minute until I realized that the attraction was already boarding groups so I hurried over to the attraction. Things were going great and boarding groups were moving along…until the attraction broke down. To be honest I went to the Dark Side for a moment but eventually things got going again and after a decent wait I finally got my chance to board Star Wars: Rise of the Resistance!

Of course one of my goals was to capture a video of the attraction which I have posted below. I hope it gives you a good idea of what the attraction is about. It does contain spoilers obviously so be aware. From this point on so will my text and description of Star Wars: Rise of the Resistance so if you don’t want to know anything about it, stop reading!

I had a lot of fun my first time through. It’s super interactive as it moves you from inside to outside to inside and finally finishing outside. The attraction is trackless which means it can move all over the place: forwards, backwards and side to side when it needs to. Think of Luigi’s at Cars Land. Magnets move the vehicles in whatever direction it needs to go. 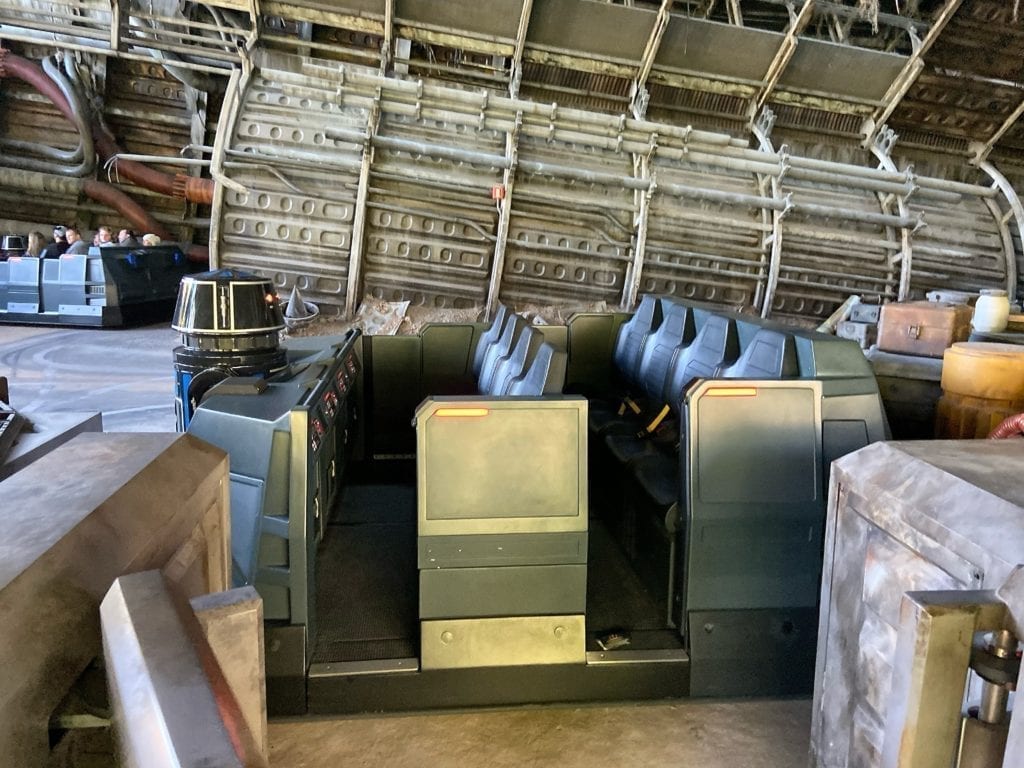 One of the things I loved the most about the attraction was the characters played by the Cast Members. This attraction demands that a certain number of Cast Members play roles as you go through your mission. Some Rebels on your side and many with the First Order. Either way it surprised me at how many they had playing live roles.

There’s also an astonishing amount of Audio-Animatronics that are so extremely fluid and life-like. Very cool! And the sets that you get to walk through are ginormous. You’ll see in the video but when you enter the First Order ship inside the hangar, your mind will be blown at how massive it is. Same with the AT-AT Walkers.

Overall Star Wars: Rise of the Resistance is an incredible feat for Walt Disney Imagineering and will be an E-Ticket attraction for many years to come. 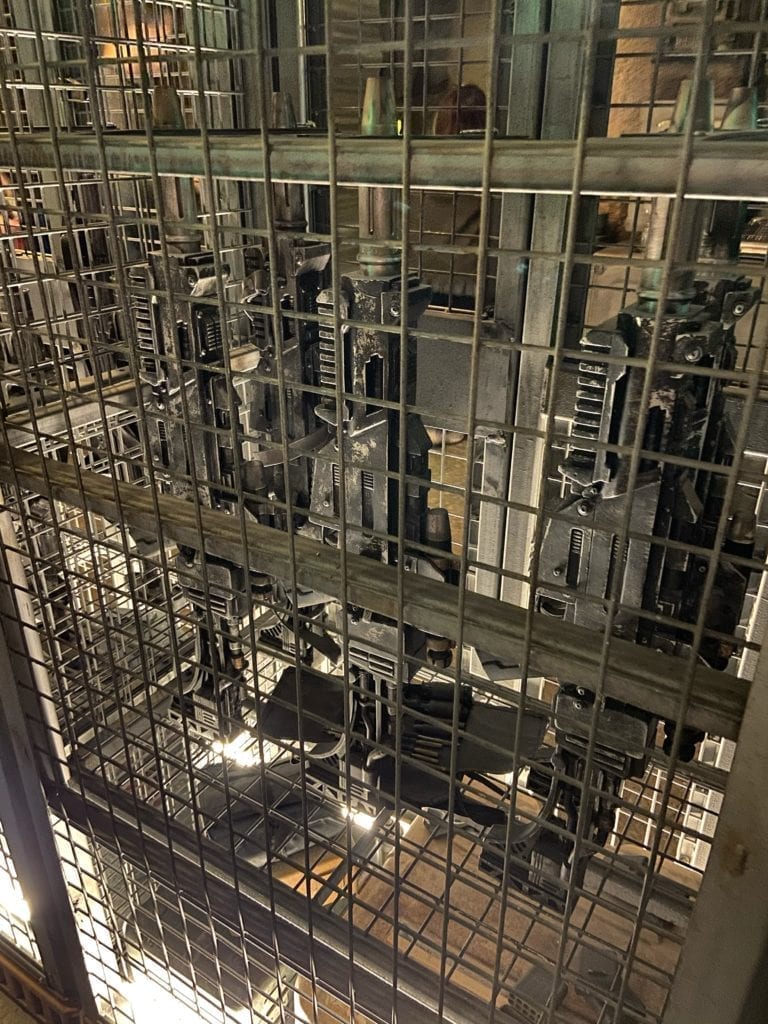 To spill a bit on my honest side, I have to admit that the attractions technology, or maybe how the attraction is done is not something new. Universal Studios had been doing similar attractions with moving forwards and backwards etc. along with screens. That basic idea didn’t “wow me” but it did take it to an new level which is awesome. It’s definitely new for Disney.

Of course the story is very unique and has never been done before. Here’s what you can expect for Star Wars: Rise of the Resistance.

The attraction is currently running on a virtual queuing system which means that there is no standby or FastPass+ line yet. Once you enter the park by scanning your MagicBand all you need to do to enter the queue is open the official Walt Disney World App and click on the Galaxy’s Edge banner for the queuing system.

Select “Join a Boarding Group” and confirm who in your party will be going. Once you’ve done this you’ll be assigned a Boarding Group. If you’re in the 20-30’s you can expect to get called up around 9-10am or so and if you’re in the hundreds you’ll be later in the evening. Either way the app will tell you when it’s time to return. Make sure you have your notifications turned on for the app! 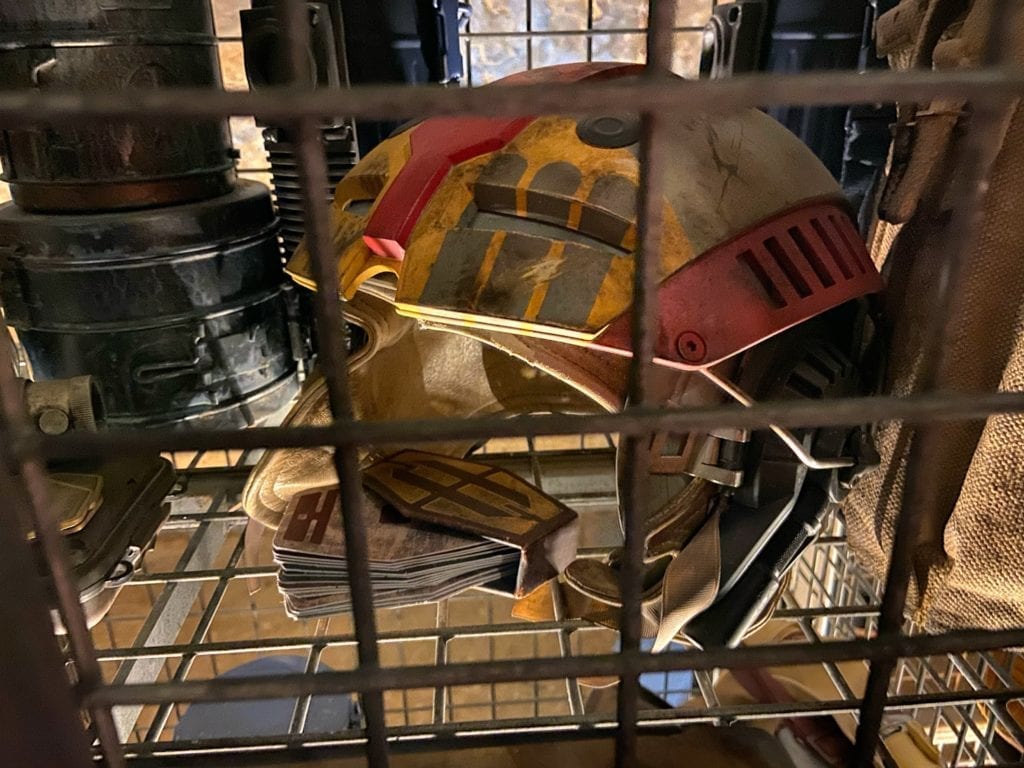 Once you arrive for your boarding time you’ll enter a line at the attraction and a Cast Member will scan your MagicBands or tickets to confirm your time. Then you’ll enter the main line and head on in to begin your mission.

The queue is fairly long but with lots of things to look at. You’ll stay entertained during this process. Eventually you’ll get broken up into smaller groups and sent into a mission briefing room where BB-8 and Rey will give you details of your mission and to never reveal the bases location. From here you’ll head outside where Rebel team members will be preparing you to enter your transport.

Once inside the transport you’ll head off into space but soon be attacked and taken hostage. Once inside the hangar of the First Order ship you’ll be taken from your shuttle through the main hangar and into another small line where you await interrogation. 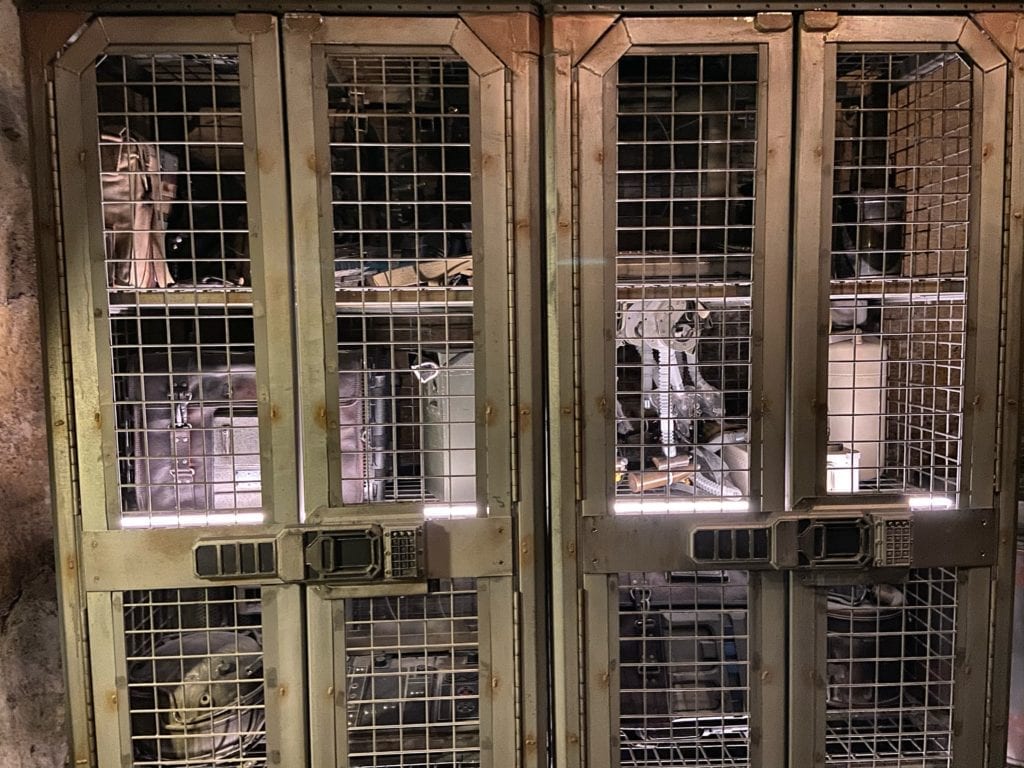 You’ll be queued up into a smaller group again and assigned a color. The First Order Cast Members kept telling us to remember our color and not forget it. This has to do with where you end up in your attraction vehicle.You’ll move from the hallway into a room where where Kylo Ren come sto interrogate you. Fortunately for you he is called to the bridge and after he leaves your Rebel friends bust into the holding room to help you escape.

This is where you’ll board your attraction vehicle and when remembering your boarding colors comes in handy.

During this part of the attraction all you have to do is sit and be amazed. You’ll go up and down, side to side, forwards and back. You’ll see massive AT-AT walkers, ship guns and of course Kylo Ren is chasing you the whole time. It really is incredible at what this attraction takes you through and what you experience.

Finally you end up back at base and you’ll exit your vehicle outside and walk away having been successful at your mission! 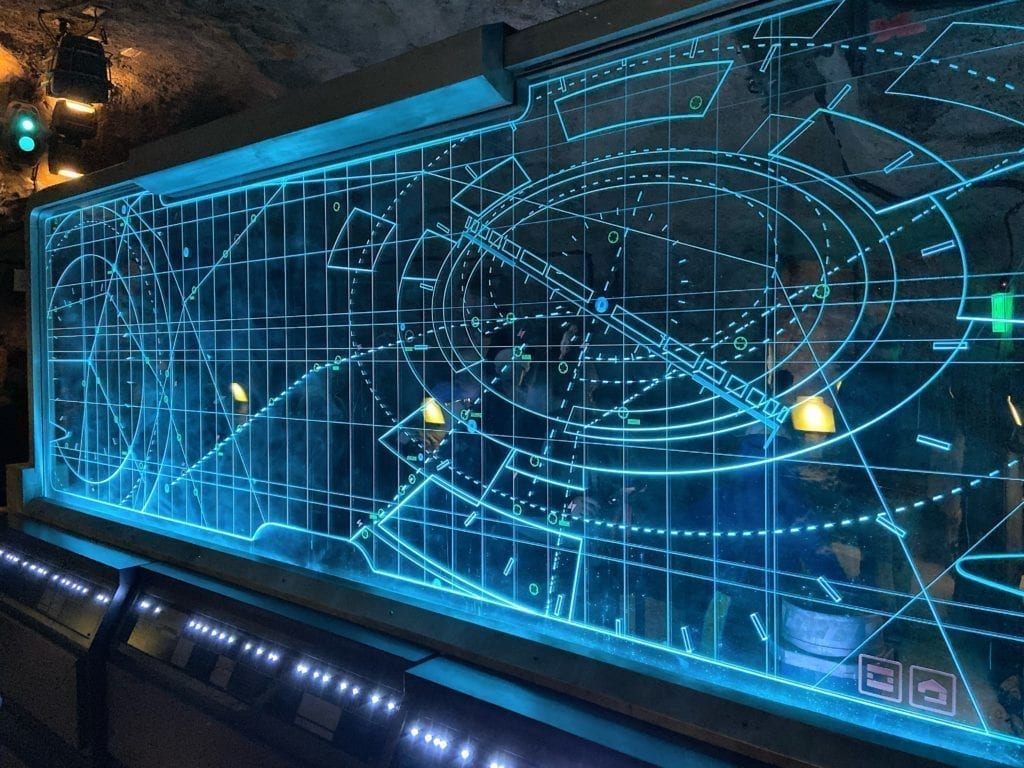 I’m not sure how long the virtual queue system will be in place for Star Wars: Rise of the Resistance but during the first month or so you may want to show up early to get one. On opening day I got one at 6am or so and was group 34. Other guests were 100 something and then they ran out by 8am. Keep that in mind when planning.

Eventually though there will be a FastPass+ line and a regular standby line (and I hope a single rider). I was actually pulled ahead because It was just myself so there is hope.

Enjoy the very raw and unedited video I shot and don’t mind the fact that some people have a hard time remembering their boarding color! ?

Thanks for subscribing! Please check your email for our next newsletter.
By Dean Chapman
Attraction Reviews - Walt Disney World Tags: galaxy's edge rise of the resistance star wars