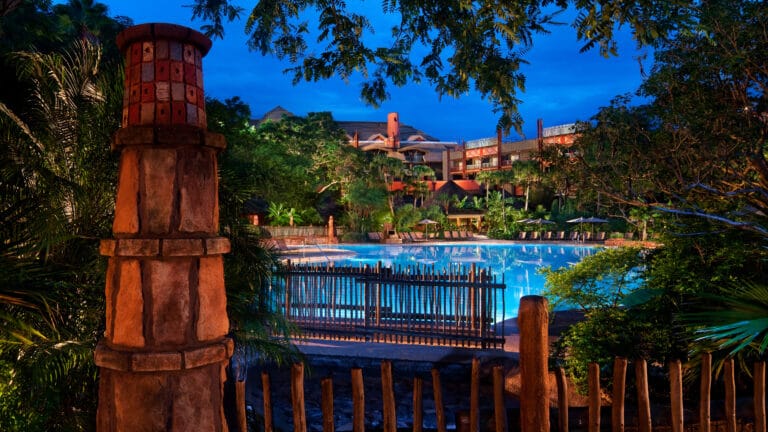 Although the theme parks are where much of the magic happens, where you choose to stay during your Walt Disney World vacation has a huge impact on your experience. From deluxe resorts with all the pixie-dusted bells and whistles – and a high price tag to match – down to budget hotels with cheap rates and no shortage of Disney magic, there’s something for everyone.

While you could certainly stay just across the street from Magic Kingdom at the Contemporary Resort (just think of those fireworks views!) or an easy stroll away from Epcot at the BoardWalk Inn, Animal Kingdom hotels offer an escape from the theme park craziness without skipping out on the convenience of staying at a Disney resort.

But, which of the hotels near Animal Kingdom Theme Park is right for you and your group? Read on for our roundup of the best Disney Animal Kingdom hotels, along with why you should stay in Disney World’s wildest resort area. Let’s get started! 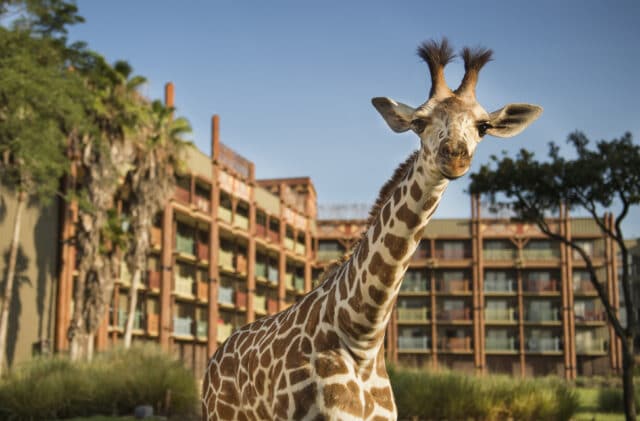 The Animal Kingdom Resort Area has a little something for everyone, from African-inspired adventures at two deluxe resorts to Spanish-style details at moderate rates to larger-than-life theming with a generous dose of pixie dust at the three cheapest hotels at Disney World.

Sure, it may lack the undeniable convenience of a stay in one of the Epcot, Hollywood Studios or Magic Kingdom hotels, as you’re unable to walk from any of the Animal Kingdom resorts to the theme park and your only complimentary option for getting around is the Disney bus system.

However, if you’re hoping to save some cash, want tons of amenities without spending an arm and a leg or don’t mind splurging if it means having an unforgettable experience, then the Animal Kingdom Resort Area is for you.

Disney’s Animal Kingdom Hotel Area is officially home to five resorts (or seven, if you count the two DVC deluxe villa resorts at  Animal Kingdom Lodge). They include: 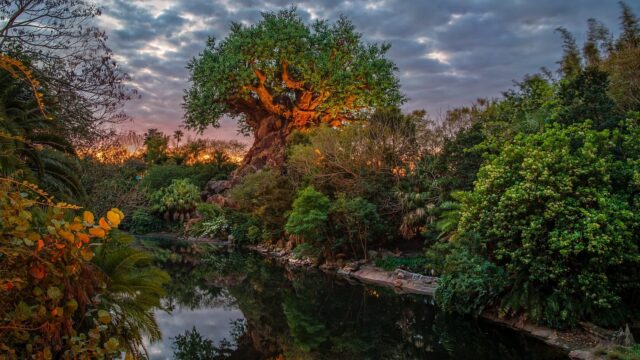 Hotels near Disney Animal Kingdom Theme Park might not be the most convenient places to stay at The Most Magical Place on Earth. That title goes to the hotels near Magic Kingdom or in the Hollywood Studios and Epcot Resort Area.

But, there are still several advantages to booking a stay in this slightly more secluded corner of Walt Disney World, including some of the Central Florida resort’s most affordable room rates, delectable dining and unmatched amenities.

Close (But Not Too Close) to the Theme Park Action

Wanting a little reprieve from the pixie dust while still being ideally situated close to the theme parks? Look no further than the Animal Kingdom Resort Area. While it is certainly convenient to be within walking distance or just a short Monorail, boat or Disney Skyliner ride from the likes of Magic Kingdom, Epcot, Hollywood Studios or Disney Springs, that convenience often comes at a price, namely heavier crowds and higher room rates.

As you can only get to these resorts by taking a bus or Minnie Van or driving your own vehicle, they can tend to feel slightly less busy, especially if you’re staying or going for dinner at Animal Kingdom Lodge or Coronado Springs, making for a welcome respite after a busy day in the parks. 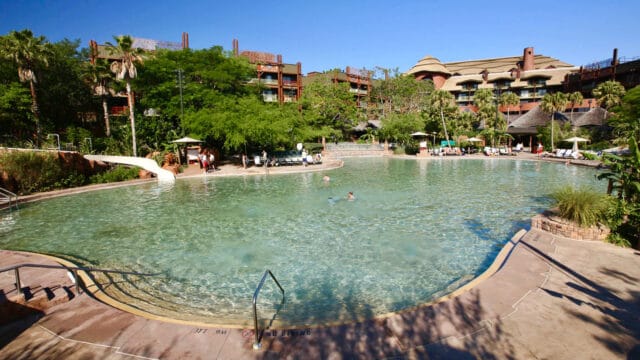 The main exception to this rule is at Disney’s All-Star Resorts, which are often crawling with school, athletic or other youth groups. On the bright side, they also tout the lowest room rates on property, a worthwhile tradeoff, as far as we’re concerned.

Convenient Access to Some of the Best Disney World Resort Restaurants

Ok, we’ll admit that the food courts at Disney’s All-Star Resorts aren’t exactly what we’d call dining hot spots. However, that certainly isn’t the case for some of the incredible restaurants at Animal Kingdom Lodge and Coronado Springs, which cook up some of the best food (and views!) at Disney World.

Whether you want to enjoy Indian flavors while gazing out on a savanna of roaming giraffes and zebras, bottomless helpings of African-inspired fare, globally inspired bar food favorites from an open-air waterfront lounge, or Spanish-style steakhouse cuisine and gorgeous rooftop views, these hotel restaurants have it all. 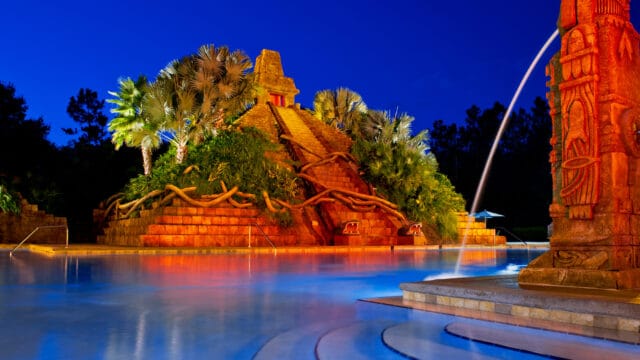 But wait, there’s more! If all that international influence and the impressive views weren’t tempting enough, you can even take your tastebuds on an adventure with Animal Kingdom Lodge’s Wanyama Safari, which includes a tour of the resort’s savannas and dinner at Jiko – The Cooking Place, or enjoy a meal with a Disney Animal Specialist at Sanaa.

Sadly, due to the pandemic, these unique dining options aren’t currently available. However, once they return, these are two foodie experiences you definitely won’t want to miss.

A Variety of Disney World Hotels to Suit Any Budget

There’s no denying that a trip to The Most Magical Place on Earth doesn’t come cheap. Luckily, Walt Disney World offers a wide assortment of resort hotels, from inexpensive value resorts and affordably priced moderates to spacious villas and luxurious deluxe resorts with next-level offerings like fine dining restaurants, must-try lounges and enough activities to keep you busy even when you aren’t in the parks. And best of all, you’ll find them all in the Animal Kingdom Resort Area.

Without a doubt, the Animal Kingdom Hotel Area is home to the most covetable resort “amenity” in all of Walt Disney World: The savannas at Disney’s Animal Kingdom Lodge. Teeming with wildlife like giraffes, zebras, ostrich and all sorts of antelopes, this African-style lodge is a dream for animal lovers of all ages. 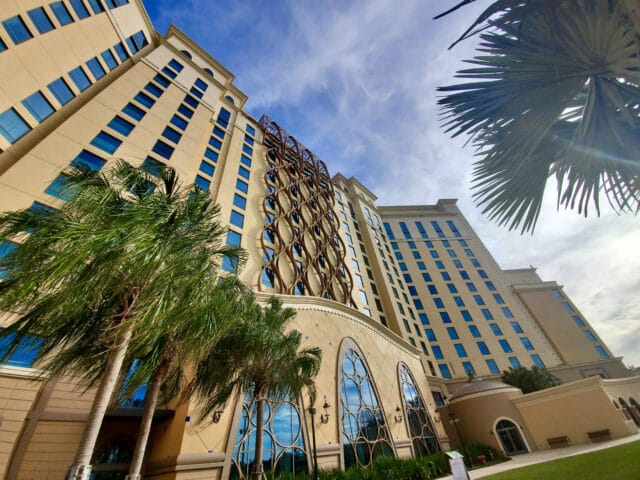 To top it all off, unlike the creatures that call Animal Kingdom Theme Park’s Kilimanjaro Safaris home, you don’t need to pay for a pricey park ticket to enjoy them. Whether you’re stopping by to eat at one of the resort restaurants, doing some resort hopping or simply relaxing by the pool, enjoying these beautiful animals is completely free. That is unless you decide to treat yourself to a stunning (and stunningly expensive) savanna-view guestroom. Talk about a room with a view!

So, what are the best hotels near Disney Animal Kingdom Theme Park? That depends on who you’re traveling with, how big your budget is, the number of people in your party and what kind of atmosphere you’re looking for. With a variety of resort types and a range of room rates, there’s a home away from home to suit everyone. 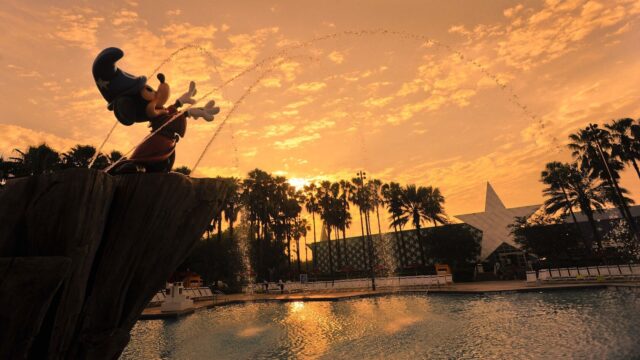 For many families heading to the Walt Disney World Resort, especially those with younger children, a Disney character-inspired hotel stay is an absolute must. Unfortunately, unless you’re staying at Disney’s Art of Animation Resort, the priciest of the value resorts, you’re bound to spend a pretty penny – and even that doesn’t necessarily come cheap.

Happily, that isn’t the case with Disney’s All-Star Movies Resort. Taking its inspiration from some of Disney’s most popular films, such as 101 Dalmatians and Toy Story, this value resort is dotted with supersized versions of these beloved characters, making for the perfect photo backdrop.

Though among the smallest guestrooms on property, ringing in at 260 square feet, all rooms at All-Star Movies were refurbished in 2019, receiving a bright and modern update with colorful nods to your favorite Disney characters. Enjoy a laidback breakfast, lunch or dinner at the World Premiere Food Court, which is designed to look like a movie theater lobby, or take in one of the Movies Under the Stars at The Reel Spot near the Fantasia Pool. 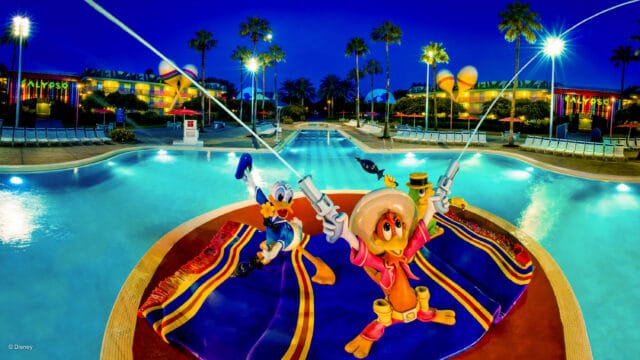 Looking for a guestroom with enough space for your family that isn’t ridiculously expensive? (We know, we know – it’s a tall order.) Then Disney’s All-Star Music Resort is for you. Offering fully remodeled standard rooms and family suites, which clock in at a spacious 520 square feet and fit up to six people, this value resort is perfect for groups both large and small.

Themed after some of the world’s most popular music genres – with a healthy sprinkle of pixie dust – All-Star Music is great for Disney fans and music lovers alike. Whether splashing about alongside the Three Caballeros at the Guitar Pool or posing beneath signs from Disney on Broadway stage shows, guests of all ages are sure to be charmed. Fuel up for the day at the Intermission Food Court.

Last but not least of the All-Star trio, Disney’s All-Star Sports features a winning lineup of over-the-top, athletic-inspired theming and comfortable rooms at inexpensive rates. Unfortunately, this is the only value resort that has yet to be renovated. Worse yet, you won’t even enjoy a slightly discounted room rate for your trouble. 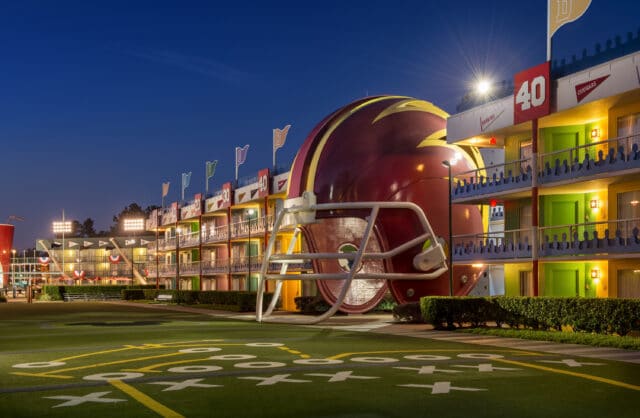 That being said, if you’re trying to save some money, All-Star Sports is a true MVP. With charming “appearances” by Disney characters playing their favorite sports in immersive settings like a football field and the baseball diamond-shaped Grand Slam Pool (with Goofy on the pitcher’s mound, no less!), your next stay is sure to be a winner. Feeling famished after a long day in the parks? The End Zone Food Court is a home run.

Hoping for a Disney World hotel stay you won’t soon forget? Make a reservation at Disney’s Animal Kingdom Lodge. Though the most expensive of the hotels in the Animal Kingdom Resort Area, the high price tag is worth it. Why? The unforgettable view!

While you might not be able to walk to Animal Kingdom Theme Park from the hotel, the resort boasts four African savannas filled with wildlife that basically bring the theme park to you. Ever dreamed of seeing giraffes stroll past your window? Just upgrade to a savanna-view room and make your dreams come true.

Naturally, a stay at this animal oasis doesn’t come cheap. However, with amazing perks like Extended Evening Hours at the theme parks and three of the best restaurants at Disney World (Boma, Sanaa and Jiko – The Cooking Place) in addition to those savanna views, we think the cost is worth it.

Need more space? Book one of the Disney Animal Kingdom Villas at Kidani Village or Jambo House. Not just for DVC members, these expansive units fit up to 12 adults, with many touting savanna views.

Best for Craveable Restaurants, Transportive Design and VIP Treatment at an Affordable Price

What’s more, as one of Disney World’s convention hotels, it also offers the most (and best) amenities of any moderate resort, including top-notch restaurants and lounges, an impressive assortment of fitness activities and one of the best hotel pools. You can even give yourself the VIP treatment with a club-level room in the Gran Destino Tower. 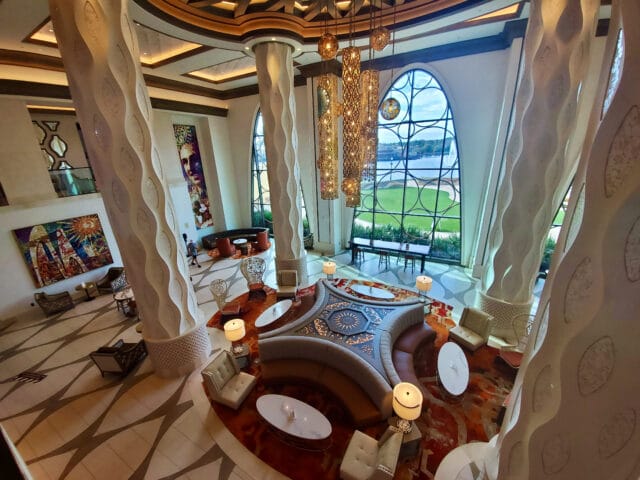 Kids will love making a splash in the Mesoamerican-inspired Lost City of Cibola Pool and roasting marshmallows over a crackling fire at the Dig Site’s nightly campfire. Adults, meanwhile, can enjoy such fun activities as painting classes and mosaic workshops or enjoy a drink at one of the resort’s delightful bars like the Dahlia Lounge or lakefront Three Bridges Bar & Grill at Villa del Lago. To really take your stay to the next level, indulge in a meal at Toledo – Tapas, Steak & Seafood, the resort’s rooftop bar.

Well, folks, that wraps up our list of the best Disney Animal Kingdom hotels. Have you stayed at any of the resorts on our list? Which Animal Kingdom hotel is your favorite? Let us know in the comments! Want to make your stay in the Animal Kingdom Resort Area a little easier on the wallet? Make your travel budget stretch with our discounted Disney World tickets.