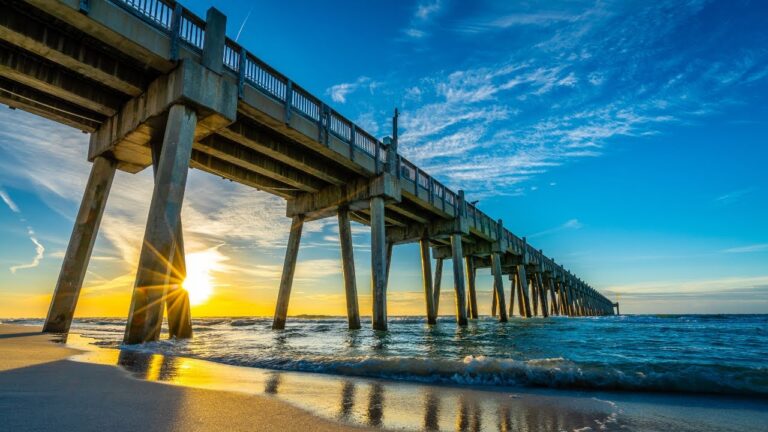 You’ll know when you get to Pensacola Beach. How many other places have a giant sailfish welcoming their visitors? It’s just one way that Pensacola Beach sets itself apart from the rest of Florida.

Visiting Florida has become so classically American that it is a double-edged sword: you don’t need to explain why you’re going, but everyone assumes you’re either bound for Miami or Disney World. But savvy travelers know that there’s another side to this popular peninsula, one that combines sunny skies and balmy temperatures with truly unique charm. If you’re interested in history, dining, shopping, the great outdoors, or any number of other activities, then Pensacola Beach should be on your short list of vacation destinations.

Tucked into Florida’s western panhandle and bordering the Gulf of Mexico, Pensacola Beach is a happy mixture of 50’s kitsch, modern convenience, and timeless ocean beauty. Whether you’re coming to dip your toes into the sugar-like sand on the beach, ride the Atlantic’s pounding waves, or simply soak up the sun (and some excellent food) Pensacola Beach is waiting for you. 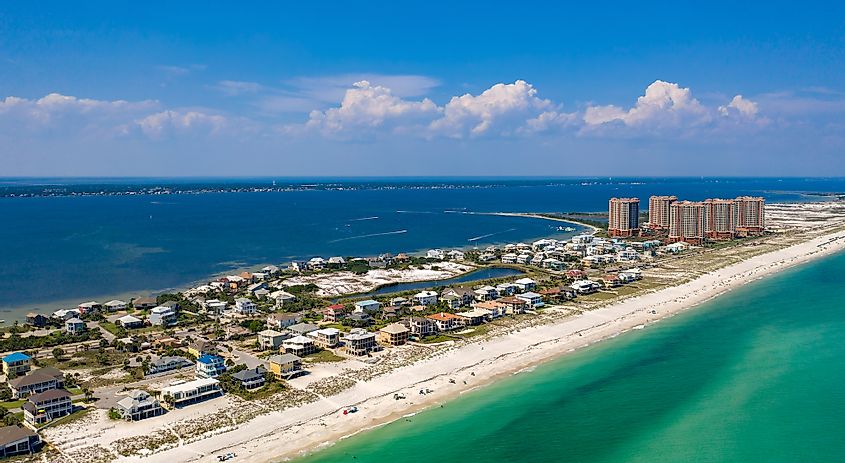 Pensacola Beach is located on Santa Rosa Key and is adjacent to the City of Pensacola. What makes Pensacola Beach distinctive is not only its seemingly precarious position – jutting out into the Gulf of Mexico on a slender, flat island – but the soft white sand beaches that give the town its name.

Don’t be misled by the area’s vacation-ready mix of modern and retro; this is an area with serious history cred. The city of Pensacola was founded in 1559, making it older than both St. Augustine and Jamestown, Virginia. Today, a large cement cross marks the spot where disembarking Europeans celebrated the first Mass on US shores.

Arriving in the Pensacola area is easy. If you’re driving in from Alabama or points north, take Interstate 65 south til you hit the Pensacola exit. From the east or west, hop on Interstate 10; to get to the beach, get on I-110 and look for the downtown exits.

If you’re not within driving distance, fly into Pensacola International Airport. It’s actually within the town limits and quite easy to navigate. More than 100 flights depart from here each day, and the airport is served by most major carriers, including Delta, US Airways, United, American Airlines, and AirTran.

To make matters even easier for surf-ready visitors, Pensacola Beach has launched a free beach-going trolley service. It runs every Friday, Saturday, and Sunday from Memorial Day to Labor Day. 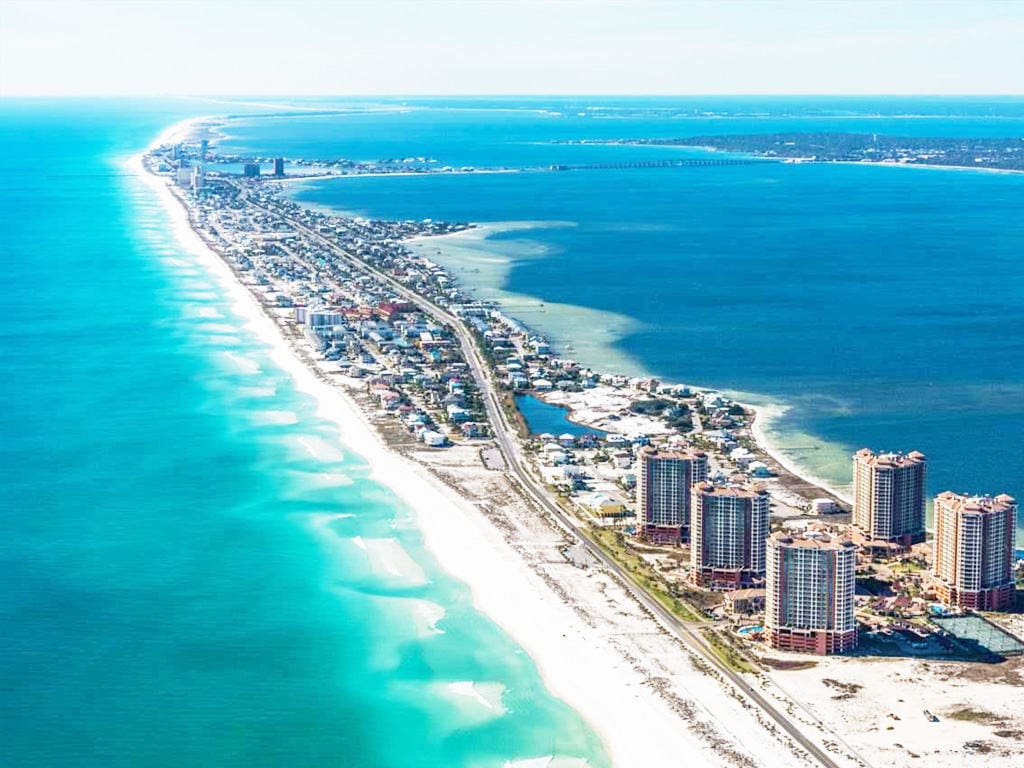 Pensacola Beach caters to practically all tastes. There are more attractions in the surrounding area than there is space in this article to name. Here are the main highlights, grouped by subject:

If you like sports and outdoor life, you can boat, swim, surf, fish, hike, and paddle by Pensacola’s shores. Be sure to check out the Gulf Island National Seashore for an idea of what the keys look like in their wild state. Canoeists will enjoy the multiple state parks in the area, while ocean-going boaters and fishing enthusiasts can take their pick from a number of charter services.

If history and culture are more your style, cross onto the mainland and you’ll find plenty of both in Pensacola proper. Your first stop should be Historic Pensacola Village, with its graceful, tree-lined square. You can visit a number of restored houses that show how life was for people of different times and social levels; there are also a couple of museums and the Colonial Archeological Trail to explore. Nearby is Pensacola’s trendy art district, where wrought-iron architecture brings New Orleans to mind. And culture lovers won’t want to miss the galleries, art museums, and theaters that Pensacola offers.

If you’re a social bug, Pensacola Beach gives you plenty of chances for you to meet people and go places. The island is home to several restaurants that are justly famous for their fresh seafood, and an eclectic assortment of local stores are within easy reach. You should also make time to stroll down Pensacola Beach Gulf Pier; at 1,471 feet, it’s the longest pier in the Gulf of Mexico. Pensacola is known as a city that loves its festivals, and the Pensacola Beach Air Show, the Pensacola Jazz Festival, and the Pensacola Seafood Festival all mark local delights.

Finally, as Pensacola is home to the largest naval base in the US, the city is a magnet for military history buffs. The base is home to the Blue Angels, the National Naval Aviation Museum (which houses 140 restored aircraft, flight simulators, and a 7-story-tall movie screen), as well as Pensacola Lighthouse, Fort Barrancas and Advanced Redoubt – all worthwhile historical sights. Fort Pickens, on the far end of Santa Rosa Island, is another irresistible draw for many amateur historians. While Fort Pickens is open to the public, there is no road leading to it, so alternate travel arrangements are in place. 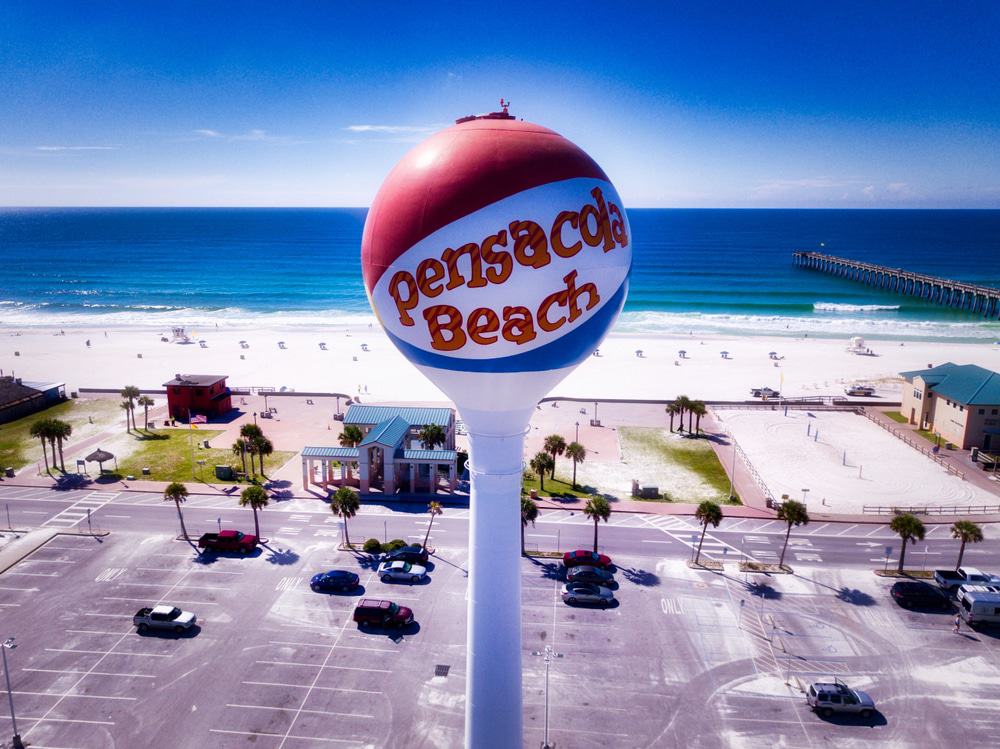 Although Pensacola Beach is surrounded by water, the local restaurants aren’t limited to seafood – although seafood lovers can eat astoundingly well here on the freshest of catches. Many types of cuisines are represented, from traditional American to Asian fusion; there’s also some exceptionally good barbeque to be had.

Pensacola Beach is more than a notch in northern Florida’s Gulf coastline and a giant statue of a fish. Give this island town a chance, and you’ll be drawn in by the mix of sun, sea, sand, and fun that it offers.