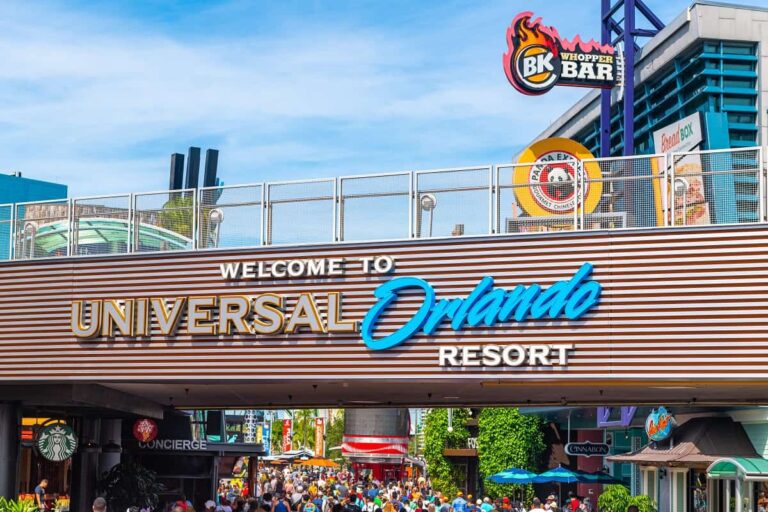 What is the Best Time to Visit Universal Studios Orlando?

Universal Studios Orlando is a globally popular vacation destination. You’re guaranteed to have fun wherever you go. One thing you must be prepared for, though, is the massive crowds.

Every year throughout the seasons, the park attracts many visitors from all over the world. This being the case, you might ask when the best time to visit Universal Studio Orlando is.

The best approach to this depends on what you want to achieve from your visit. Do you want to avoid the crowds, or are is your interest in getting the lowest prices? This article will answer that question and help you pick the best time to go to Universal Studios.

The Quietest Times at Universal Studios

Maybe your aim is to avoid the large crowds that come during peak seasons like summer. Avoiding the crowds also means cutting down on the high price tags that are characteristic of such seasons. In this case, the best time to visit is when schools are in session.

It’s also best to avoid visiting during national holidays like Christmas or New Year. The quiet months at Universal Studios include the following.

Most schools open by the first week of January. Not many parents will be thinking of spending money on vacation activities during this time. The focus would be on meeting school-related costs.

January is also the coldest month in Orlando and there are fewer tourists at the parks. The price of accommodation is also lower, cutting down your budget significantly.

The quiet season in January runs through the first few days of February. Shortly after comes the UK midterm that brings with it the Mardi Gras festival in Universal Studios. This is a period marked with large crowds.

Another ideal period to visit Universal Studios Orlando is between April and May. You’re likely to get the best low-season perks as long as you avoid any seasonal school holidays. It’s referred to as the “shoulder season,” bordering the end of the low season and the beginning of the peak period.

This is another shoulder season in Universal Studios and a fantastic time to visit. However, unlike the April to May period, the weather can be hot and rainy. Schools are open, and there won’t be much stress getting from one point to another.

The good thing with Universal Studios during the rainy season is that most of the rides are indoors. There are also plenty of other indoor spots to go to if you want to avoid the rain. The holidays to avoid during this period are the UK’s half-term break, Fall Break, Thanksgiving, and Halloween.

New Years Eve is one of the busier days during the year (if not the busiest) to visit Universal Orlando. Crowds are at the highest as guests pack the parks to celebrate the new year. Universal puts on a party like no other and because of this both parks tend to reach capacity.

Unless you really love big crowds and long lines, skip New Years Even and look for something right after the holidays.

The last two weeks of December are extremely busy at Universal Studios. School is out and everyone is looking to vacation somewhere. The theme parks are no exception. One of the biggest draws is the Holiday celebration put on by the parks, particularly Harry Potter.

Both Harry Potter lands are very festivite from costumes and decorations to sweet treats and entertainment. These are the two biggest draws to Universal. Be prepared for large crowds and long waits. We highly recommend getting Front of the Line Pass for these dates.

Are you interested in knowing the specific best days to visit Universal Studios? This section can help with that. As such, it can be easy to plan your time and enjoy the experience during the visit.

Most of these dates are projected to have fewer crowds. They also attract lower prices.

The Cheapest Time to Go to Universal Studios

You’re probably looking for the best time to visit Universal Studios Orlando from a cost perspective. The cost usually goes down when the park is least crowded.

The best times to visit on a tight budget are:

You can also check with your travel agent to see if there are any exclusive deals outside these periods. If you’re traveling with children, the only downside is that they may have to miss school during these times.

The Best Time to Visit Depending on Weather Conditions

One of the factors that influences the decision to take a vacation is the weather. This is especially true where children are concerned. For Universal Studios Orlando, visitors can take advantage of the heated water throughout the year.

You won’t have to worry about the cold season as the place stays well-heated. Taking a vacation when the temperatures are soaring high can be uncomfortable given Volcano Bay is close nearby.

Mid October to December would also be another ideal period to visit. The weather is comfortable and there’s also a smaller crowd to grapple with.

Universal Studios hosts some special holiday events each year. Christmas in the Wizarding World of Harry Potter, for example, is one occasion you should plan to visit. There are also several other fun events where you can experience maximum fun.

These have been chosen based on the lowest crowds.

Overall, the best time to visit Universal Studios Orlando is when the weather is cooler and the crowds are fewer. Additionally, be on the lookout for special events hosted at the part in October, November, March, and December.

The best time to visit Universal Studios Orlando depends on whether you want to avoid the crowds or save money. It may also be determined by the periods that the park offers special events with themes around holiday seasons. A combination of all these factors would make for the perfect trip to this theme park.

The best approach is to avoid the months when schools are on holiday. You also want to avoid summer when the temperatures are high, Spring Break, Easter, and the Christmas period. The essential thing is to ensure you make the most out of your visit regardless of the season.