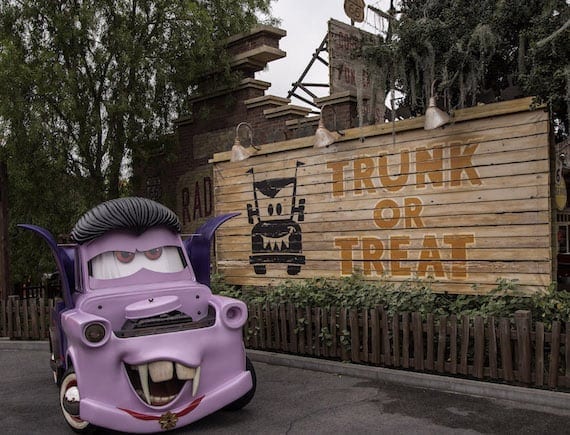 Halloween Time at the Disneyland® Resort is expanding into Disney California Adventure® Park, bringing the first-ever Haul-O-Ween in Cars Land. The residents of Radiator Springs are getting into the spirit, decorating each of their establishments and even donning their own car-stumes!

Lightning McQueen is already a super hero to race fans, and his car-stume reflects that. Here he is next to the scare-car which makes its Haul-O-Ween debut this year. 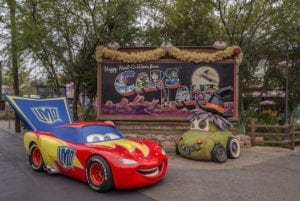 CARS LAND HAUL-O-WEEN – Everyone’s favorite Cars characters have transformed Radiator Springs into their own Halloween celebration during Halloween Time at the Disneyland Resort. For the first time, the Cars characters will be donning their Halloween “car-stumes” as they greet guests and prepare to go “trunk-or-treating.” Lightning McQueen is dressed as a super hero. Cruz Ramirez, Red the Fire Truck and DJ get dressed up as a pirate, a clown and a punk rocker, respectively. (Joshua Sudock/Disneyland Resort)

Mater may not have a trunk, but that won’t stop him from trunk-or-treating in his vampire costume. 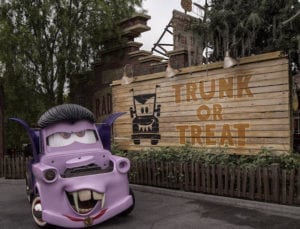 Since the Disneyland Resort began celebrating Halloween it’s always been in Disneyland Park. Moving over to California Adventure Park is a big step in allowing all guests to join in on the fun. The Cars Land Halloween celebration is going to Spook-tacular. Be sure to read up on our Guide to Mickey’s Halloween Party for 2017.