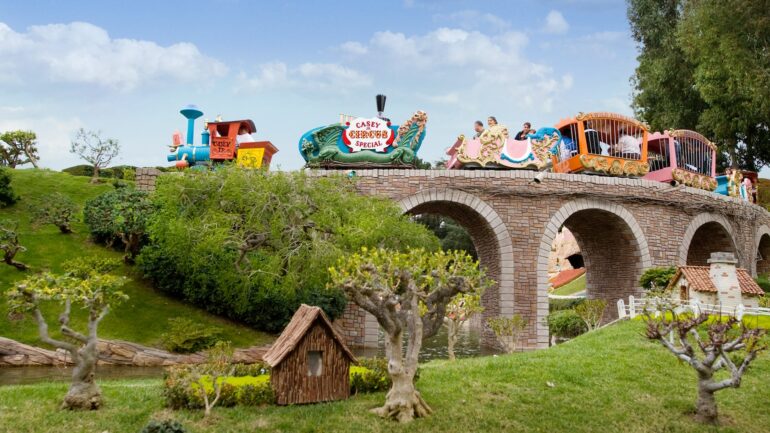 Ride the rails aboard a festive circus train pulled by brave little engine Casey Jr.—from the classic Disney animated movie Dumbo. Wend your way over happy hills and through verdant valleys to behold familiar dwellings and villages—amazingly rendered in miniature scale. Along the way, Casey Jr. faces his biggest challenge: an impossible hill. We think he can make it—do you think he can?

Casey Jr. Circus Train was one of the original Disneyland Park attractions from 1955. The sleigh-style train cars were transplanted from the merry-go-round that later became King Arthur Carrousel. We all know the story well: a little train on an important mission who proves everyone wrong as he makes it up an impossible hill.

The attraction is actually similar to the Storybook Canal Boats attraction in that it sees almost all of the same scenes, just from a higher vantage point. The train includes a variety of cars including cages and sleigh-style ones. The most comfortable ones are open-air with two rows while the cage ones are a bit..containing. They aren’t our favorite but for kids they are so be aware.

The attraction is slow moving and doesn’t do anything but circle around a track as you look out on different Fantasy scenes below. It’s an easy attraction for anyone to ride. The entrance can be a bit hard to find. It’s next to the Dumbo attraction on the left-hand side. You have to walk up some stairs or take a ramp to get to it.

What movie is Casey Jr train from?

Casey Jr Circus Train is from the 1941 film Dumbo in which the train is in charge of moving the circus and its performers from one place to another. Although not a prominent part of the film itself, one scene in particular, where the train needs to make it up an impossible hill, stands out to audiences.

How old is the Casey Jr Circus Train?

The train is an opening-day attraction for Disneyland Park in 1955. In 2022 the train will turn 67 years old.

How many Casey Jr trains are there?