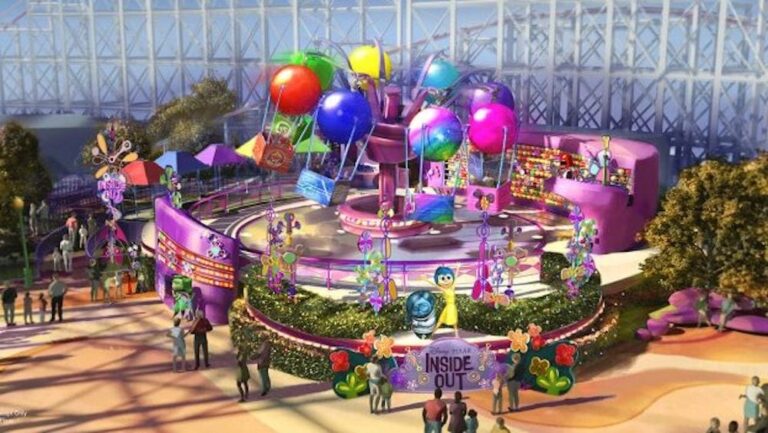 Inside Out Emotional Whirlwind to Open in 2019

There will be four exciting neighborhoods to discover at Pixar Pier in Disney California Adventure® Park —Incredibles Park, Toy Story Boardwalk, Pixar Promenade and Inside Out Headquarters.

Located on the western end of the pier, the lush and colorful Inside Out Headquarters will be the future home of Inside Out Emotional Whirlwind! Making its Pixar Pier debut in 2019, this whimsical family-friendly attraction inspired by “Inside Out” will be—not surprisingly—full of emotions.

While we’re not huge fans of the name (nor some of the other names used at Pixar Pier) we think this attraction will be a great new replacement for Flicks Flyers from Bugs Land when it’s removed in Fall of this year. We thought it would have been cool to do UP! houses with balloons for this attraction but they didn’t ask us!

Also joining Pixar Pier in 2019 is Jessie’s Critter Carousel. Inspired by Jessie’s wilderness friends in the “Woody’s Roundup” television show from “Toy Story 2,” this reimagined attraction is a classic boardwalk carousel with a rootin’ tootin’ spin.

In the meantime, you can visit Pixar Pier starting June 23, 2018 to discover many new experiences, including the Incredicoaster and Pixar Pal-A-Round attractions, Lamplight Lounge, Pixar-themed food locations and more!

Be sure to purchase your discounted Disneyland theme park tickets that include our Best Price Guarantee and read our official guide to Pixar Pier.