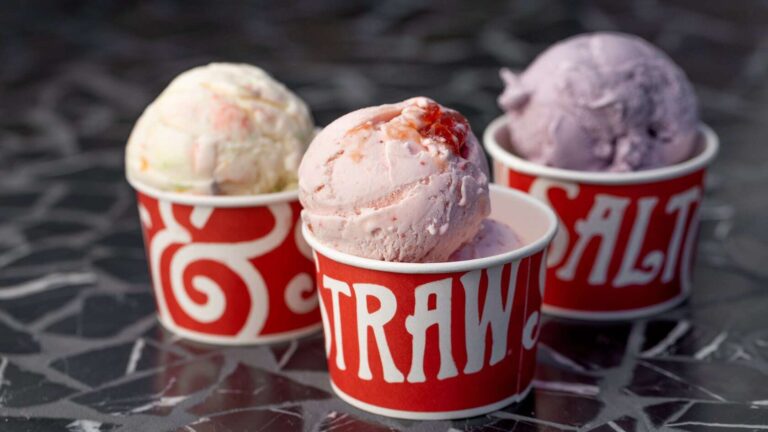 Ah, ice cream. It’s one of those desserts that everyone loves, especially on a hot day in Central Florida. Well, thanks to a new scoop shop at Disney Springs, your next mid-vacation sweet craving is about to get a whole lot tastier.

But, are these surprising scoops worth a lick on your next Disney trip? (Spoiler alert: Heck yes!) For all the delicious details about Salt and Straw Disney Springs, bring your appetite and keep reading. 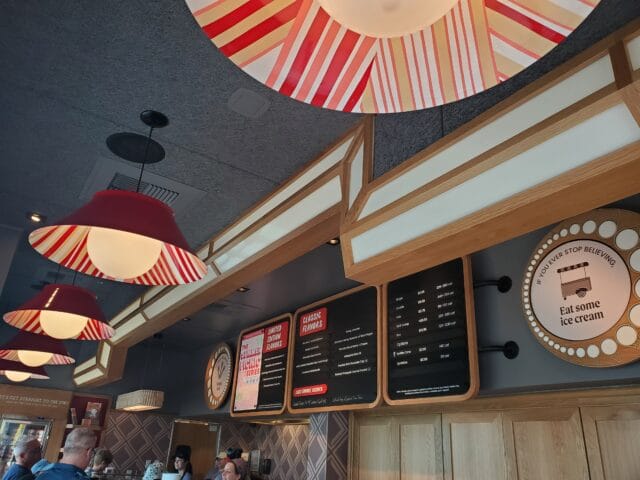 Salt & Straw has been winning fans at Disneyland since 2018 with its inventive and sometimes surprising flavors. Caramelized Turkey & Cranberry Sauce ice cream, anyone? (No, we’re not kidding.) Now, the scoop shop that’s taken the food world by storm, earning accolades from the likes of Food & Wine magazine and Delish, has finally made its way to Walt Disney World.

Where is the original Salt & Straw?

If you couldn’t tell already, Salt & Straw is no ordinary ice cream shop. Started as a humble food cart back in 2011 by a pair of cousins, Kim and Tyler Malek, in Portland, Oregon, it began with Kim’s dream to build a place where people could gather and treat themselves to something sweet.

And what better place than an ice cream shop? Just think of all the kids that come running when they hear the tell-tale tinkle of the ice cream truck as it rolls into the neighborhood, and you’ll know what we mean.

There was just one problem. Neither of them had any experience concocting the icy confection. Fortunately, with the help of some used ice cream makers bought for the princely sum of $16, hours of taste-testing by amateur ice-cream maestro/evil genius, Tyler, and an army of collaborators, Salt & Straw became a reality. They opened their first brick-and-mortar location three months later and never looked back. 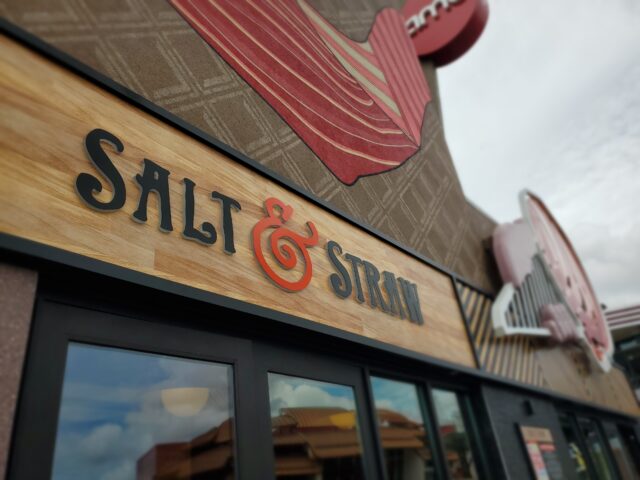 So, where do the salt and straw in the company’s name come from? It’s a tribute to how Salt & Straw ice cream is made – lovingly hand-churned in small batches – going all the way back to ice cream’s modest beginnings.

The “salt” is a nod to the ingredient’s ability to lower the temperature at which water freezes. Then, by submerging a pail of sweet cream into the icy liquid and cranking with all your might, magic happens, and the mixture transforms. Finally, the “straw” references the use of hay to insulate the concoction as it hardened into cool, delicious ice cream.

Why is Salt & Straw good?

At Salt & Straw, ice cream is so much more than the sum of its parts. It’s ice cream hand-churned in small batches with cream from a herd of grass-fed and rbGH- & antibiotic-free cows that have been raised by a family of fifth-generation dairy farmers from the Golden State.

It’s not just chocolate and vanilla. It’s Chocolate Gooey Brownie with stuffed with chunks of brownie made with house-made marshmallow fluff, so each hunk stays fudgy instead of tooth-breakingly hard. It’s Double Fold Vanilla made with Singing Dog Vanilla, a local Oregon vanilla extract brewed with two times the vanilla beans.

What makes Salt & Straw so darn good is all the hard work, thoughtfulness, creativity and community connectedness that goes into it. They use high-quality ingredients which have been lovingly sourced from local farmers, chocolatiers, brewers, distillers and other artisan food makers, crafting adventurous ice cream flavors that consider every aspect of the eater’s delicious journey.

It’s locavore-inspired ice cream on a deliciously big scale. Oh, and it tastes incredible, too.

How can I try Salt & Straw?

If you’ve read all this and are wondering, “How can I get my hot little hands on some of this fancy ice cream?”, you’re in luck. There are close to 20 Salt and Straw locations dotted across the country, with the vast majority of them being on the west coast in either Oregon, Washington or California. You’ll also find three scoop shops in Florida, the Disney Springs location or two in Miami.

Don’t worry, you don’t have to miss out on the sweet stuff even if you aren’t on vacation at Disney or near one of Salt & Straw’s many unconventional ice-cream outposts. Pints are available for purchase from the company’s online shop. And if you’re lucky, you may even get a Salt & Straw near you sometime soon – they’re hoping to double their locations over the next few years.

There’s something playful and also a little nostalgic about ice cream that makes you feel like a kid no matter how old you are when you eat it. Just think of the feeling you get chasing trails of ice cream with your tongue as they melt down the sides of your waffle cone and, if you aren’t paying attention, onto your hand.

Heck, even that sweet and crunchy vessel of goodness makes for a pretty fun (and tasty) way to eat ice cream. So, any time someone turns a classic like ice cream on its head, people are bound to take notice, and that is definitely the case with Salt & Straw.

While people are used to standard flavors like chocolate, strawberry or cookies & cream, Salt and Straw’s claim to fame is its imaginative combinations. Each month, the company cooks up an assortment of seasonal Limited Edition Flavors, all inspired by a unique theme.

When we went, it was The Summer Picnic Series. Think Cinnamon & Honey Fried Chicken, a salted vanilla ice cream studded with croissant pieces that have been golden fried with chicken fat. Last month, appropriately, was The Flower Power Series. Because April showers bring May flowers – and ice cream bursting with blooms.

These time-sensitive tastes make up around a third of your options. The rest of the menu consists of Classic Flavors, which are a mix of more expected ice-cream concoctions with an elevated twist – like Cinnamon Snickerdoodle dotted with crumbles from grandma’s beloved cookie recipe – plus some more locally inspired varieties. In Florida, you’ll find special selections like The Salty Donut Guava + Cheese, crafted with guava curd made in the Sunshine State and styled after a Miami donut shop’s famous pastry.

Here are all of the Salt & Straw ice cream flavors you can currently enjoy at Disney Springs:

Salt & Straw Review – Is It Worth It?

Ok, let’s get down to business. And by “business,” we mean getting to sample all that delicious ice cream. I had read about Salt & Straw’s (in)famous Thanksgiving turkey ice cream a few years ago, so I was thrilled to finally have a chance to try some of their other flavors at the new Salt & Straw in Disney Springs. Luckily, I wasn’t disappointed.

Located on Disney Springs’ West Side, Salt & Straw is conveniently located right next to the AMC Theaters and Splitsville Luxury Lanes near the Orange Parking Garage. Just keep an eye out for the massive ice cream cone sign.

Craving ice cream for breakfast or some late-night sorbet after a souvenir shopping spree? Well, you’re in luck. Almost as generous as their unlimited samples are their operating hours. Salt & Straw at Disney Springs opens its doors at 10 AM each day and keeps scooping cups, cones, pints and flights of the sweet stuff until 12 AM midnight every night.

Stepping inside, you’ll notice that this Salt & Straw scoop shop is strictly a counter-service joint. Things can get pretty cozy, especially when there are a bunch of people trying out flavors. So, keep in mind that you’ll need to take your treat and it somewhere else once you’ve made your selection.

Still, there is some eye candy to enjoy as you wait for your turn. While the ice cream may be cold, the space itself feels warm and welcoming, decked out in honeyed wood paneling, chocolatey browns in a waffle cone-like pattern and pops of white and red.

You’ll also spy some cheeky signs, like “If you ever stop believing, eat some ice cream” and “We highly recommend tasting it all.” Well, don’t mind if we do. There were even cute little slots for dropping your dirty spoons once you finished the samples.

Along with the counter filled with tempting selections, you’ll also find some fun Salt & Straw-themed merch, such as cookbooks, ice cream scoops, apparel and even Florida-inspired tote bags and tumblers. Oh, and for all the gourmand scent lovers out there, don’t miss out on “A Whiff of Waffle Cone,” available in both a perfume(!) and a candle.

That brings us to the stars of the show: Salt & Straw’s famous ice cream flavors. Current options are posted both outside the shop and on a large sign behind the counter. And oh boy, be prepared to be overwhelmed because there are a lot of them. Luckily, as we already mentioned, you’re able to try each and every one before you commit – for free!

And trust us, we took full advantage. Fortunately, the cast member behind the counter was a good sport, and more than willing to feed our desire for ice cream and interesting tidbits of both flavor and company information.

While we weren’t able to try all of them – Panther Coffee Chocolate Tres Leches and Strawberry Honey Balsamic w/ Black Pepper were sadly defrosting in the back – we did get to savor a spoonful of most of them. Let’s just say, we were not disappointed. In fact, after eating our way through all of them, there wasn’t one I didn’t like. Even the more unique flavors, like the Devilled Egg Custard w/ Smoked Black Tea, were tasty and interesting in their own way.

After the parade of samples, I opted to go for two simple scoops of Honey Lavender and Arbequina Olive Oil, a combination suggested by the cast member. Both ice creams were velvety smooth and nicely complemented each other, making for a cup that was complex yet approachable.

The floral flavor in the Honey Lavender is strong yet mellow, with a touch of honey towards the end to round things out. Don’t worry – it doesn’t taste like a garden party in your mouth. Plus, the dusky lilac hue is undeniably Instagrammable.

The Arbequina Olive Oil, meanwhile, was like an especially rich and buttery but subtle vanilla with just a hint of olive oil’s savory grassiness. Not as saccharine sweet as your typical vanilla, it’s what the ice-cream classic wishes it could be when it grows up.

For a palate cleanser, I also tried a cup of the seasonal Pink Rosé & Watermelon Sorbet. Light and refreshing, watermelon and rosé punch is frozen to perfection and swirled with a drizzle of house-made raspberry rosé jam. This was like a delightfully sweet summer cocktail in spoonable form.

Is Salt & Straw worth it?

100% yes! We aren’t exaggerating when we say that Salt & Straw scoops up some of the absolute best ice cream at Walt Disney World. Does it push the envelope when it comes to some flavors? Absolutely! And that’s a huge part of the fun, at least in our opinion.

Sure, if you’re traveling with some especially picky eaters or you’d rather have an over-the-top sundae swimming in toppings, you might be better off at the Beaches & Cream Soda Shop at Disney’s Beach Club Resort or the Ghirardelli Soda Fountain and Chocolate Shop at the opposite end of Disney Springs. However, for ice cream fans on an adult Disney trip or families with adventurous taste buds, Salt & Straw is a winner.

Best of all, not only will you be dreaming about the deliciously inventive flavors for days to come, but the small-batch ice cream is also relatively reasonably priced, especially when you think of the quality ingredients going into it. What’s more, the service is top-notch.

Have you stopped by Salt & Straw Disney Springs for a scoop yet? If so, which flavors are your favorite? Let us know in the comments! Then, save some cash for more ice cream treats with our discount Disney World tickets.