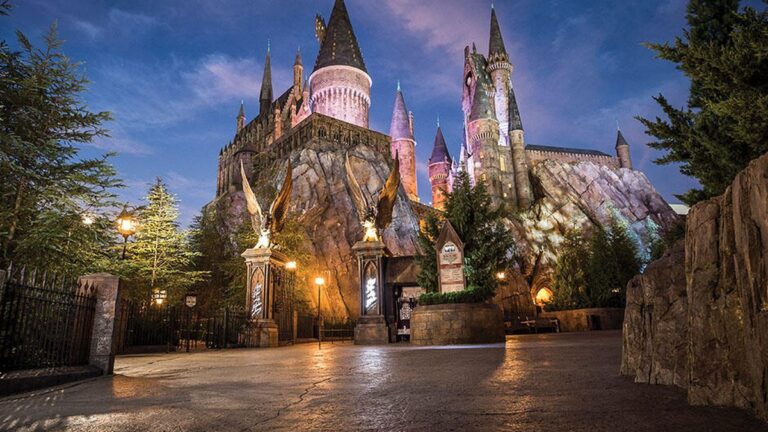 Before you can explore the Wizarding World of Harry Potter or run alongside Blue on the thrilling VelociCoaster, you’ll need to embark on another less exciting adventure first: the trip from the Orlando Airport to Universal Studios with your luggage in tow.

But, what’s the best way for you to get from MCO to Universal Orlando? We’ll go over everything you need to know about arranging transportation from the Orlando Airport to Universal Studios, including cost, time and more. So, buckle up and let’s get started.

Is There Transportation from the Orlando Airport (MCO) to Universal Studios?

As nice as it would be to just hop on a roller coaster and ride it all the way from the airport to your Universal Orlando hotel, that sadly does not exist. If you’re going to be flying into the Orlando airport for your Universal vacation, you have a few different options, from joining other tourists on a shuttle to living large with a limo or town car.

How Far Is Universal Studios from the Orlando Airport?

That depends on which Orlando airport you’re talking about. That’s right, when flying in and out of Orlando, you actually have two different airports to choose from.

Orlando International Airport (MCO) is the city’s main airportand also the busiest in the state, with service on over 40 airlines to 135 destinations both stateside and internationally. Luckily, it’s also the closest airport to Universal Orlando and other popular Central Florida destinations, clocking in at a 13- to 17-mile trip depending on the route.

Located in a quaint town north of the city, Orlando Sanford International Airport (SFB) is another possibility, although it is considerably further at between a 31 to 37-mile drive. Primarily serving as a focus city for Allegiant Air, it is also much less connected than MCO, though could be convenient for those flying from certain smaller regional airports.

But, which to choose? The City Beautiful is large, spread out and, unfortunately, home to some pretty nasty traffic. Now, we don’t know about you, but there’s no worse way to start or end your trip than getting caught in standstill traffic on your way to your hotel after a day of traveling or heading to the airport for your flight back home.

That’s why we highly suggest flying into MCO over SFBwhether you’re visiting Universal or Disney – especially since, as Orlando International Airport cheekily and rightly points out, MCO basically stands for much closer to Orlando.

Does Universal Have Free Airport Shuttles to/from the Orlando Airport?

Unfortunately, unless you’re calling up a friend to pick you up, no complimentary transportation is available from the Orlando Airport to Universal. Although there is a Universal Orlando airport shuttle, the SuperStar Shuttle, that drops guests off at the different Universal hotels, you will need to pay per person to book the service. (We’ll get to more on what it costs and your other options next.)

There are several different ways to get from the MCO Airport to Universal Studios Florida. Whether you need convenient yet cheap transportation from MCO to Universal Orlando or you’re ok to splurge if it means more privacy or independence, there’s an option to fit your needs and budget.

While you could certainly try LYNX, Orlando’s public bus system, and save a pretty penny – rides between the airport and Universal are just $2 per person – the trip itself will take at least an hour and 15 minutes. And, that doesn’t include the time you’ll spend waiting for the bus to arrive, let alone researching which route you should take or wrangling your luggage and kiddos if you need to transfer. So, we say skip it unless you’re really trying to skimp out.

Instead, take a look at our picks for the best ways to get from the Orlando Airport to Universal Studios. As you weigh your options, be sure to keep in mind not just your budget, but other factors like the size of your party, other plans for your trip, amount of luggage and level of comfort navigating the craziness that is Interstate 4. This will help you decide which is best for you and your crew.

Offering convenient and affordable transportation between your Universal hotel and the Orlando Airport, shuttles can be a smart choice for some budget-minded travelers. For those booking a Universal Orlando vacation package, add on the resort’s SuperStar Shuttle.

Universal’s SuperStar Shuttle delivers guests to all resort hotels, including:

Offered in partnership with Mears, SuperStar Shuttles are motorcoaches with seatbelts. So, if you’re traveling with a young child, you can bring a car seat along. However, none are provided or required.

You should plan on about 30 minutes on the bus, with up to a 30-minute wait for your shuttle to actually arrive. Additionally, keep in mind that it is possible the ride won’t be a direct trip to your hotel, as the shuttle may stop to drop off guests at other resorts first.

An ever-popular option for travelers everywhere is using a rideshare service such as Uber or Lyft. Offering a private secluded and a driver who is familiar with the area without the high price tag, rideshares provide a nice balance between convenience, privacy and affordability – all with the simplicity of an app.

Since you’ll be riding around in a regular car, this can be a great choice for those who are still a bit wary about using crowded shared transportation during these COVID-19 times. Plus, with a range of options like larger vehicles or provided car seats, they’re excellent for families.

Though relatively pricey for solo travelers or couples, since rates are per vehicle, taking a Lyft or Uber from MCO to Universal can even be quite reasonable for groups of three or above. Just keep in mind that prices can vary considerably based on when you are traveling and how bad traffic is, and you will pay more for a bigger and/or nicer vehicle.

Consider doing your research before you settle on using Uber or Lyft. Pull up the app and start to “request” a ride for around the same time you’d arrive to see what prices are like to decide if they’re within your budget. If your flight arrives when there’s usually surge pricing, high demand and or heavy traffic, think about using an alternative.

Similar to using Uber or Lyft, taxis are another reliable transportation option between the airport and Universal Orlando. With flights coming and going all the time, cabs are on-hand day and night. So, even if you used up all your phone battery on the trip in, you don’t need to worry about being stranded at the airport without a ride.

To get to the taxi stand, just head towards Ground Transportation and follow the signs. Unfortunately, if several other flights get in at the same time, you may find yourself waiting a while – up to a half hour isn’t unheard of. Like other taxis, fares are run on a meter.

It doesn’t get more luxurious than black car service. If you’re hoping to ride to Universal Orlando in style, then a private car service is for you. Offering upscale vehicles like Lincoln Town Cars or high-end SUVs, it’s perfect whether you’re looking to splurge or simply traveling with a large group or a lot of luggage. Or, go all out and reserve a limousine!

Surprisingly, as long as you’re traveling with a group, it can also be relatively inexpensive, as the rate is per vehicle instead of per person. To further offset the costs, some private car companies even allow pitstops at the grocery store to pick up supplies like snacks or bottled water. And for families with little ones, car seats can also be made available if necessary.

Several town car companies provide airport transfers from MCO to Universal Studios, like Mears and SuperShuttle, just to name a couple. We suggest you do some comparison shopping to make sure you’re getting the best rate out there.

Get a Rental Car

Last but not least, for the greatest privacy and freedom, you can’t beat a car rental. If you are planning to spend several days in Central Florida visiting other attractions like Disney World, SeaWorld or Gatorland, or heading to the coast for a beach day, you’re most likely going to need a vehicle.

While many of Orlando’s tourist destinations are centrally located not too far from International Drive, the sprawling city is huge, and it can take quite some time to drive from attraction to attraction. Rather than eating into your travel budget with a few Uber rides, think about renting a car instead.

A ton of different rental car companies have locations at Orlando International Airport, so you’re never more than a shuttle ride away from your temporary vehicle. Just remember that there could be a wait for you to get to the rental company and, then, to actually get your car, so plan accordingly.

Additionally, keep in mind that you will also need to pay for gas, as well as any parking fees at your hotel or anywhere else you’re going. For Universal Orlando hotels, parking costs range quite a bit, from $15 to $28 per night.

Getting from MCO to Universal Orlando: Our Verdict

So, which transportation option is best for you? It really depends on your group’s size, needs, plans and budget.

While the Universal Orlando airport shuttle offers straightforward pricing with roundtrip fares, shared transportation isn’t for everyone, especially during the pandemic. Moreover, some parents might not be comfortable with their children riding without a car seat.

However, while their rates of $39 per person seem reasonable for roundtrip, it adds up quickly, particularly for folks with a big family. And at $136 for a family of four, you’d be better off requesting an Uber or even arranging a car service.

Not only will you get the vehicle mostly to yourself, but you’ll avoid driving through the Orlando traffic and hopefully enjoy some great customer service along the way. Plus, with car seats also available, there’s no safer way to get between the airport and Universal.

Of course, if you’d rather have the freedom to travel around the Orlando area as much as you’d like, your best bet is getting a rental car. Prices have decreased considerably since earlier on in the pandemic, making them an affordable option once more. Sure, you will need to pay for gas and possibly tolls, but at least you won’t be at the mercy of a meter running in standstill traffic.

Have you taken a shuttle from the Orlando Airport to Universal Studios? What’s your favorite way to get around? Let us know in the comments! Want to save some cash for your vacation? Make park admission more affordable with our discount Universal Orlando tickets.