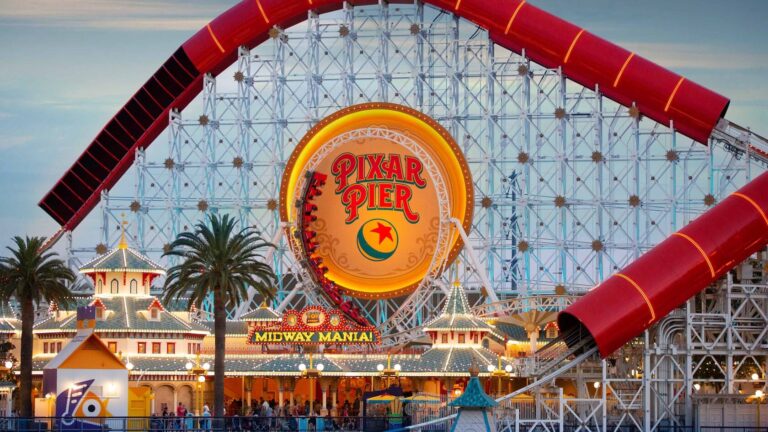 While The Happiest Place on Earth isn’t exactly what you’d consider an adrenaline junkie’s mecca, there are still a fair few thrill rides at Disneyland Resort to satisfy daredevils of all ages – from classics like roller coasters, log flumes and raft rides to an intergalactic caper on a First Order Star Destroyer crawling with stormtroopers.

So, if you’re hoping to get your pulse racing on your next trip to Disney, strap in and hold on tight as we barrel through our list of the best Disneyland rides for thrill-seekers.

Are Disneyland Rides Thrilling? Getting Your Disney Adrenaline Fix 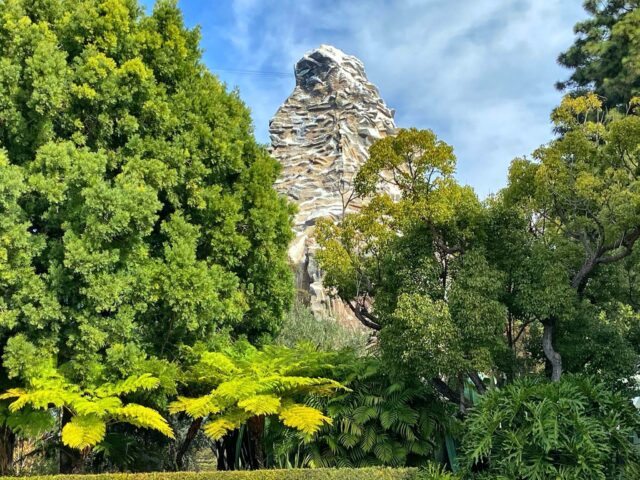 Thrill rides at Disneyland, you say? Is that even possible? Absolutely! Sure, we’ll admit that even the most thrilling rides at Disneyland can’t match the heart-pumping excitement of HangTime’s beyond-vertical drop or the intense speed of Xcelerator’s launch – 0 to 82 mph in 2.3 seconds – at Knott’s Berry Farm.

So, if you’re searching for the most extreme rides in Southern California, you’d best look elsewhere. Rather, just like you’d expect from a theme park envisioned as a place where families could spend time together, thrill rides at the Disneyland Resort can be enjoyed by adventurers of all ages.

While some roller coasters and similarly scary attractions at other theme parks are just in it for the screams, thrill rides at Disneyland and California Adventure Park are on the milder end of the spectrum, using breakneck speeds, exciting drops and hairpin turns as a vehicle for storytelling. In short, although you’ll certainly get an adrenaline rush, you should leave ready to take on another attraction, not feeling like you just escaped an untimely death. 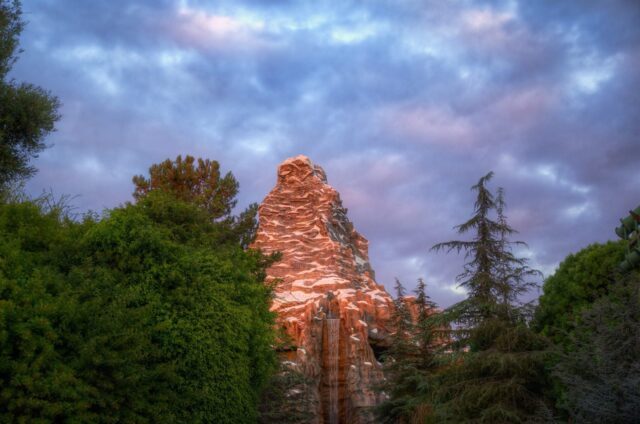 Which Disneyland Resort Theme Park Is Best for Adrenaline Junkies?

It really depends on what kind of thrills you’re looking for. Though Disneyland Park technically has the most thrill rides at the resort, they’re more family-friendly attractions, offering up plenty of nostalgia laced with just a pixie-dusting of heart-pounding excitement. Think steep yet mild-mannered drops that end with a splash, last-minute escapes from a squadron of stormtroopers and easygoing coasters that top out at speeds of 27 to 36 mph.

However, when it comes to the most scream-inducing attractions, the best Disney Park for thrill rides on the west coast is easily California Adventure Park. There, daring guests can get their blood pumping on the tallest Disney roller coaster in the world, towering 122 feet over Pixar Pier, or plummet down an exciting drop tower again and again and again (and possibly, again and again – all on the same ride).

What Is the Most Intense Ride at Disneyland? 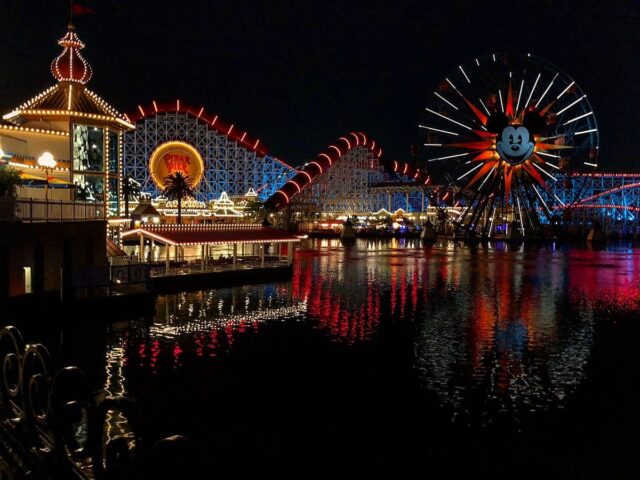 The two scariest Disneyland rides aren’t even at Disneyland at all. They’re next door in Disney California Adventure Park.

Not just Disney’s tallest coaster, the Incredicoaster – themed after Pixar’s superhero family, The Incredibles – is also the fastest ride at Disneyland Resort, topping out at speeds of up to 55 mph. Add in an inversion, the only one for any of the roller coasters at Disneyland, and you’ve got the perfect balance of edge-of-your-seat excitement with just a dash (pun fully intended) of superhero fun.

Or, for a hair-raising adventure of a different sort, make your way to Avengers Campus and Guardians of the Galaxy – Mission: BREAKOUT! Rocking a killer soundtrack, six spine-tingling drop sequences and a fun storyline, it easily tops the list of the most thrilling rides at Disneyland Resort, making it a must-try for Marvel fans and daredevil guests alike.

What Are the Best Thrill Rides at Disneyland Resort for Kids? 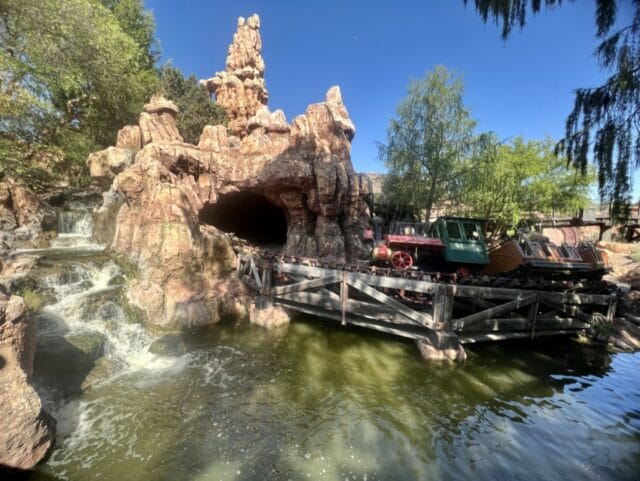 Even if you’re traveling with kids, you don’t need to miss out on all that thrilling fun. While there are certainly more intense rides at Disneyland, they aren’t at the same scream-inducing level as what you’d find at Knott’s Berry Farm or even Universal Studios Hollywood. Still, there are plenty of exciting attractions at The Happiest Place on Earth that the whole family will love, such as: 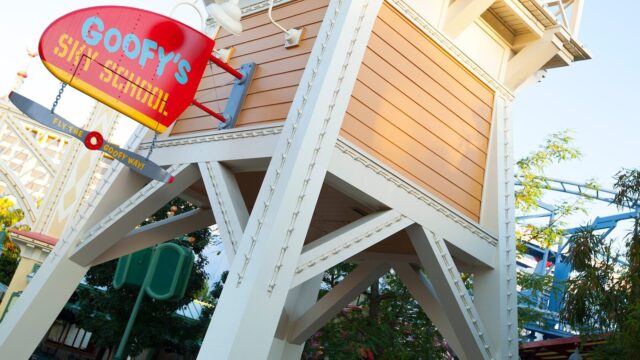 Traveling with a budding adrenaline junkie? You’ll even find a few pint-sized thrill rides that are specifically geared towards younger guests (and the young at heart). They include: 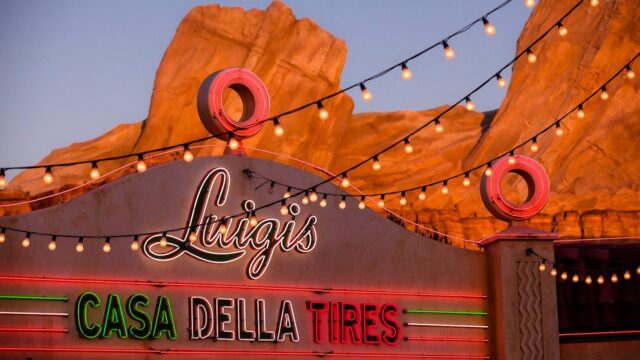 As you’ll notice, there are some limits to riding Disneyland’s more intense attractions. In fact, all of the thrill rides at Disneyland and California Adventure have a height requirement. (Don’t worry, there are also tons of attractions without a height limit, too!)

Fortunately, even if you’re visiting with some too-small or too-scared kiddos, there’s still a way for everyone that’s big enough (and brave enough) to enjoy the attraction: Disneyland’s Rider Switch Service, also called Parent Swap. Available at all Disneyland rides with a height restriction, all you need to do to take advantage of this easy-to-use service is ask one of the attraction’s cast members.

From there, your party will be divided into two separate groups, those riding first and those who aren’t able to experience the attraction for whatever reason, along with the parent or guardian who is staying behind with them. Then, after the first group has ridden, the supervising guest(s) who sat back to watch the little ones will have their chance to go on without having to wait in line all over again. 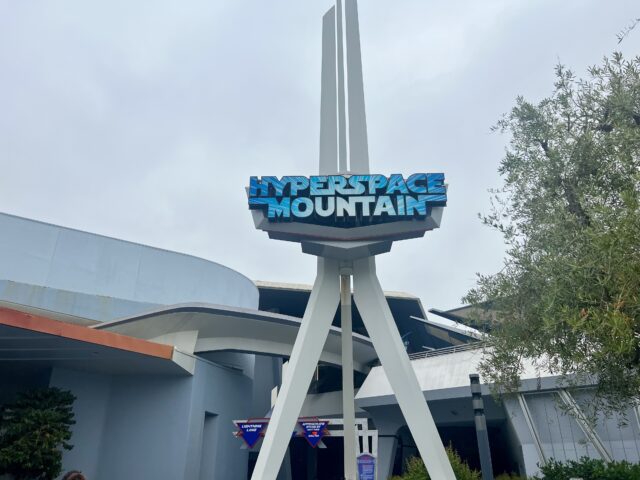 Ready to plan out an exciting day at The Happiest Place on Earth? Here are the best rides at Disneyland Park and California Adventure Park if you’re looking for an adrenaline rush, categorized and ordered from most intense to least.

From the five Disneyland mountains to out-of-this-world adventures in the Star Wars galaxy, Disneyland Park is home to exciting thrill rides for guests young and old. 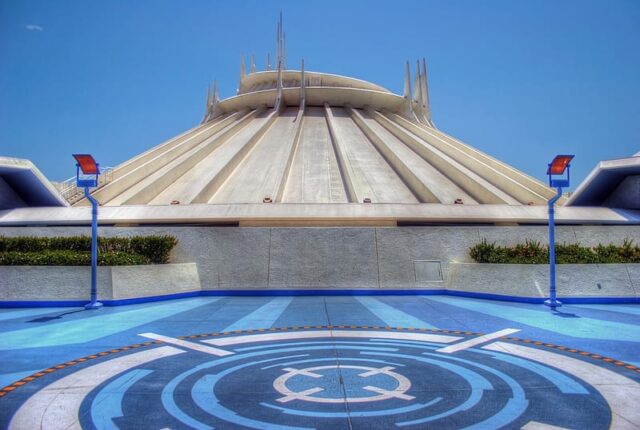 While the max speed of only 27 mph at Tomorrowland’s Space Mountain won’t exactly have you seeing stars (those are just pinpricks of light), the iconic roller coaster’s tight turns through utter darkness will have you feeling like you’re hurtling through deep space. A Disney classic that absolutely shouldn’t be missed.

With several sharp turns and a top speed of 36 mph, Big Thunder Mountain Railroad in Frontierland is a rollicking family-friendly roller coaster through the Wild West. This rickety ride down a haunted mine shaft is more exhilarating than spooky and a great introduction to Disneyland’s famous mountains. As they say, it’s the wildest ride in the wilderness!

Star Wars: Rise of the Resistance 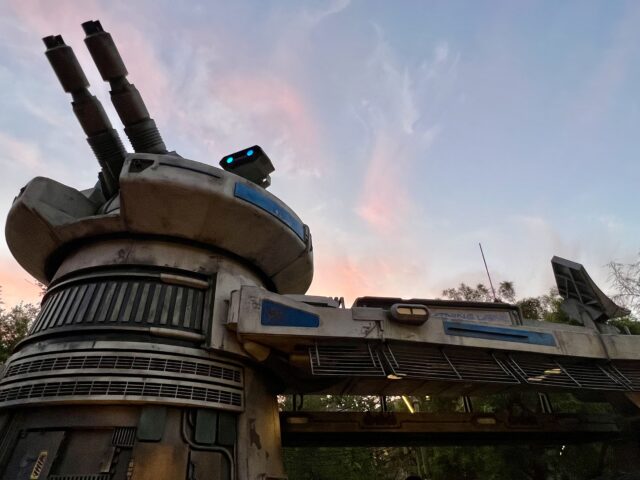 Like no thrill ride you’ve ever gone on before, Star Wars: Rise of the Resistance in Galaxy’s Edge may lack the high-speed twists, turns and drops of the Disneyland coasters, but it’s an undeniably exciting experience from pre-show to the time you get off. The trackless ride system and carefully interwoven storyline whisk you to a galaxy far, far away from the moment you step in the queue – a true feat of Walt Disney Imagineering.

While you’re just along for the ride at the other blockbuster attraction in Star Wars: Galaxy’s Edge, Millennium Falcon: Smugglers Run puts you in the cockpit of the fastest ship in the galaxy. It’s up to you to steer the hunk of junk, shoot down combatants or make any necessary repairs, depending on your role – or fail trying. Like a video game on steroids, it’s another intergalactic adventure that reimagines the thrill ride. 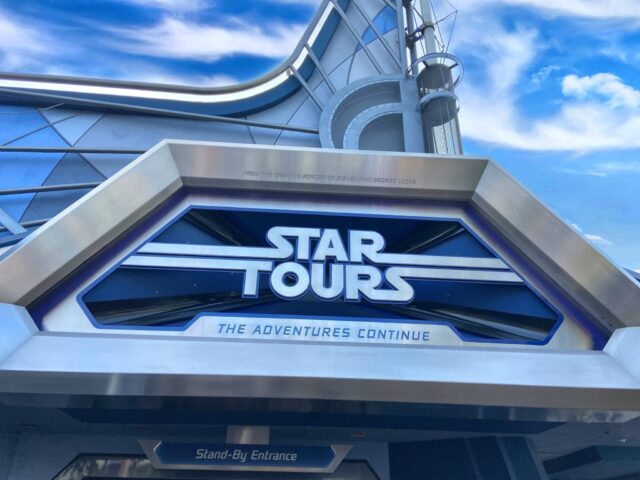 Over in Tomorrowland, Star Tours – The Adventures Continue puts travelers on yet another collision course with the First Order. With R2-D2 as your co-pilot and C-3PO behind the wheel, this simulated group tour through the stars gone awry immerses guests in the heart of the action with the help of 3-D flight goggles. Several possible scene combinations keep things fresh and exciting, whether it’s your first ride or 50th.

Best for Family-Friendly Thrills and Chills

The last of the Disneyland mountains on our list, Critter Country’s Splash Mountain has been thrilling guests with its big five-story, 45-degree drop and refreshing finale since 1989. Soon enough, this classic Disney thrill ride will be reimagined with an all-new Princess and the Frog-inspired storyline, transporting guests from the Laughing Place to the bayou. 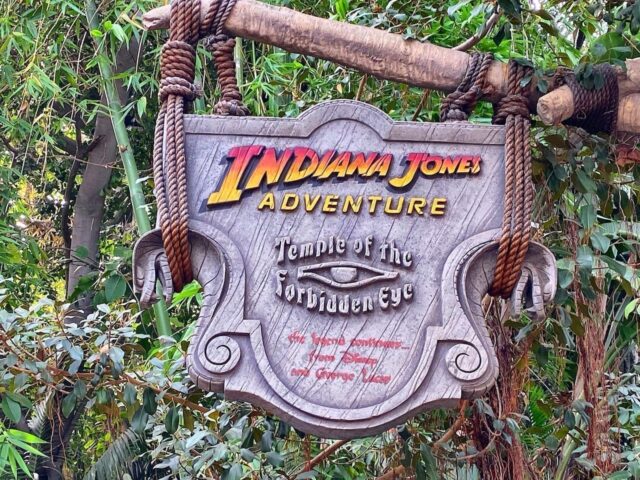 Another one of the big rides at Disneyland for thrill-seekers and amateur archaeologists alike, Indiana Jones Adventure takes intrepid guests on a fast-paced, action-packed journey through the treacherous Temple of the Forbidden Eye. Pitfalls and booby traps are around every corner on this dark ride – and don’t forget the snakes – so hang on tight. (For extra fun while you’re waiting, ignore those warning signs in the queue and pull the rope already.)

Guardians of the Galaxy – Mission: BREAKOUT! 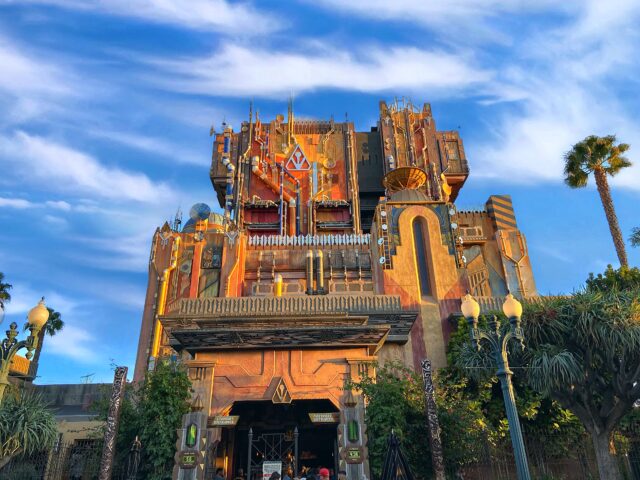 Originally thrilling guests as The Twilight Zone Tower of Terror, on Guardians of Galaxy – Mission: BREAKOUT!, The Collector has taken over and the not-too-happy Guardians are part of his prized collection. Fortunately, Rocket has managed to spring himself from his prison and is ready to bust out his friends – with your help. With six different soundtrack-drop sequence combinations, an entertaining queue and a great storyline, it’s fun to ride again and again and again, even if you’re not a Marvel fan.

The fastest of the California Disneyland roller coasters, the Incredicoaster launches guests on an Incredibles-inspired chase after a rampaging Jack-Jack. (Just a little tip, Edna: Stick to fashion, honey. Babysitting is not your superpower.) From the high-speed launch down to the tasty smells that get wafted in during the ride (chocolatey Cookie Num Nums!), this family coaster in Pixar Pier is packed with both thrills and a charming storyline. 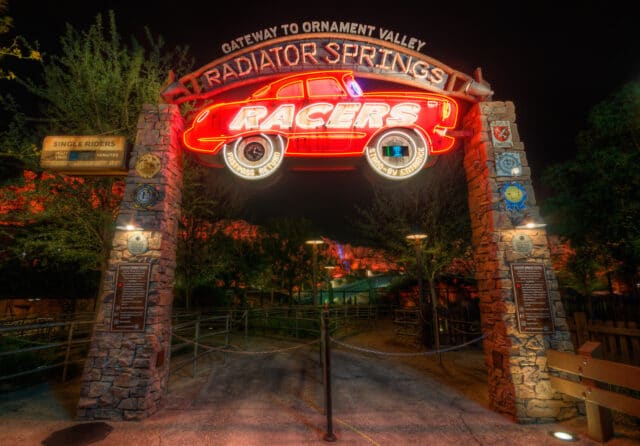 Ever wish you could drag race Lightning McQueen through Radiator Springs? Well, here’s your chance. Between the picturesque desert setting and chance encounters with beloved Cars characters, this high-speed sprint – topping out at 40 mph – is sure to satisfy both your need for speed and Disney magic. So, buckle up and cruise on over to Radiator Springs Racers in Cars Land.

Best for Wholesome Yet Thrilling Fun

We love a good whitewater raft ride, especially on a hot summer day, and Grizzly River Run at California Adventure’s Grizzly Peak does the genre justice. While the adventure lovers will enjoy the attraction’s 50-foot climb and two separate drops, including one that plummets 22 feet as the raft twists and turns, Disney fans and nature lovers will appreciate the ride’s realistic theming. 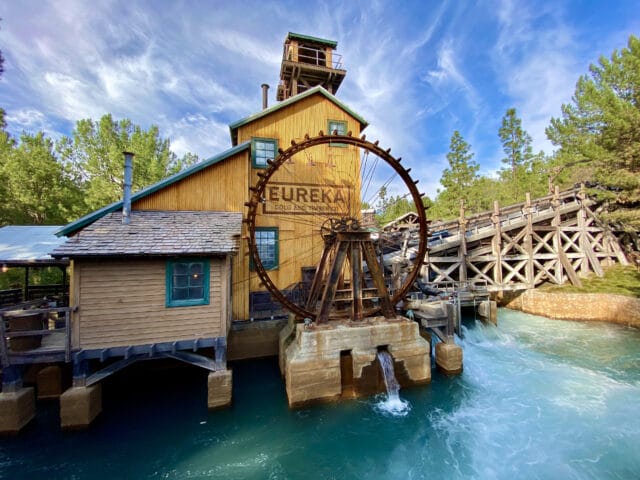 With its madcap corners à la a Wild Mouse roller coaster and oodles of inspiration from the Goof’s small-screen misadventures, Goofy’s Sky School in Paradise Gardens Park is a great introductory attraction for thrill ride newbies. What it lacks in theming and speed, it makes up in  charm.

Though technically a thrill ride (according to Disney, anyway), Luigi’s Rollickin’ Roadsters is more like a small-town family hoedown with an Italian, automotive twist – and you’re in the driver’s seat for the dance-off. More Sunday drive than drag race, this trackless attraction is sure to leave you with a smile. 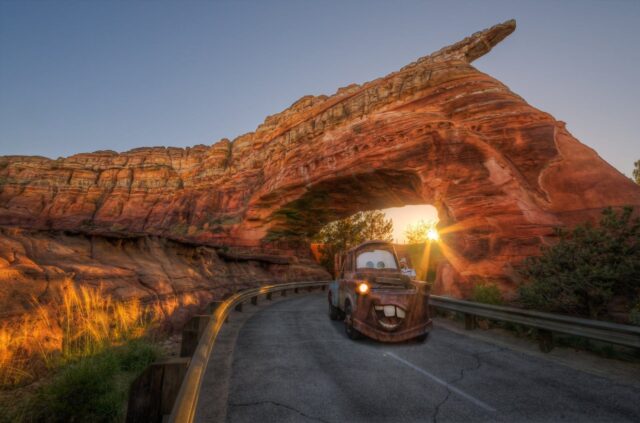 Keep the good times going over at Mater’s Junkyard Jamboree. Another Cars-inspired dance party masquerading as a thrill ride, this carefree caper is a surprisingly good time. Hop in the trailer of a tiny tractor, then get ready to fling back and forth as you do-si-do across the floor.

Well, that concludes our list of the most thrilling, intense attractions at The Happiest Place on Earth, from the scariest Disneyland rides to easygoing coasters even the kiddos will love. Which Disneyland thrill rides are on your to-do list? Let us know in the comments! Then, learn how you can maximize your travel budget with our discount Disneyland tickets.