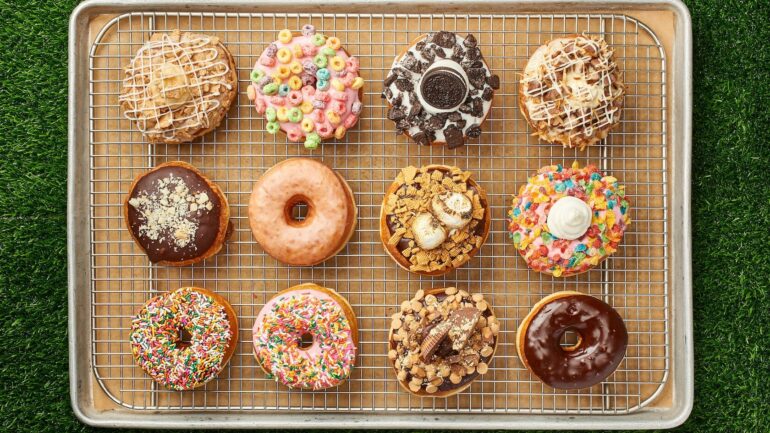 Everglazed Donuts, Disney Springs’ inventive doughnut shop, has been treating Walt Disney World guests to their sugary morning creations since January 2021. A delight for breakfast lovers and sweet tooths alike, this snack stand next to the AMC Theater and across from Splitsville Luxury Lanes is a must for fans of the quintessential pastry. Keep reading for all the delicious details.

If the over-the-top cupcakes, massive sundaes and other picture-perfect treats sprinkled around Walt Disney World like sweet, sweet pixie dust are any indications, people love to eat food that is as fun to look at as it is tasty, especially when it comes to dessert.

So, it’s only natural that another sugary delight has joined the party: the delicious donut. Opened in January 2021, Everglazed Donuts & Cold Brew brings a tempting selection of coffee drinks, cereal milk and sweet and savory eats (but mostly sweet) to Disney Springs’ West Side that is anything but basic.

What Is Everglazed Donuts & Cold Brew Known For?

Similar to its pastry-lovin’ counterpart over at Universal Orlando CityWalk, Portland export Voodoo Doughnut, Everglazed Donuts & Cold Brew is all about creative eye candy laden with goodies like cookie crumbles, crunchy cereal and lots and lots of sprinkles. This is some seriously photogenic breakfast food.

Sure, you’ll find a classic cake donut and yeasty confections cloaked with a simple glaze. However, we can almost guarantee those aren’t what you’ll order. No, if you’re anything like us and all of the other donut-obsessed Disney guests lining up for a taste, you’re here for the outrageous, undeniably Instagrammable pastries crowned with all sorts of fun toppings.

Of course, coffee and donuts are breakfast partners in crime. Fortunately, Everglazed also specializes in the other half of this dynamic morning duo, brewing an array of caffeinated concoctions swirled with everything from flavored syrups to Cinnamon Toast Milk and peanut butter sauce-infused oat milk.

When Is Everglazed Donuts at Disney Springs Open?

Whether you’re craving something sweet to get your day started or are in need of a nighttime sugar rush, Everglazed Donuts & Cold Brew has you covered. Cast members start pumping out those pastries at 9 AM daily and keep serving until 10 PM on Sunday to Thursday or 11 PM on Friday and Saturday.

Keep in mind that depending on when you stop by, there may be a bit of a wait before you can place your order. If you need your coffee and donuts ASAP, plan to visit during the morning when the wait times are only a few minutes – or non-existent.

Ironically, demand for these whimsical breakfast sweets only grows throughout the afternoon, peaking around suppertime when folks are searching for an after-dinner treat or something to power them through the rest of their souvenir shopping. And, as you might expect for a shop selling this brunch-y classic, weekends are pretty busy all day long. Luckily, even with a line, things do tend to move along pretty quickly.

How Much Are the Donuts at Everglazed Disney Springs?

So, how much will it cost you to sink your teeth into one of these breakfast beauties? Be forewarned – they ain’t cheap. Starting out at $4.75 each just for one of the Classic Donuts, like the Chef’s Cake or a Strawberry Iced + Sprinkles, Everglazed’s more basic offerings are the cheapest of the bunch. For comparison, this is also how much you’d pay for one of the donuts over at Erin McKenna’s Bakery NYC.

Then, it’s all up from there, depending on how fancy you want to get with your toppings. Donuts in The Funky Bunch cost $5.75 each, while Super Funky donuts will run you $6.50 a pop. Want to buy enough to share? Be sure to bring your wallet. Depending on which flavors you choose, plan to spend between $60 to $70 on a dozen Everglazed donuts.

Yes, that is a very expensive donut, even by Disney standards. In fact, for Everglazed’s most inventive flavors like Peanut Butter Explosion, that’s around twice what you’d pay for a similar specialty sweet from Universal’s Voodoo Doughnut.

On the bright side, these aren’t your average pastries. Everglazed donuts are huge and easily big enough to share, as long as you aren’t feeling greedy. And trust us, you may want to split the sugar with someone else anyway because these babies are sweet.

What’s on the Everglazed Donuts Menu?

Has all this doughnut talk made you hungry? Here is what’s on the menu at Everglazed Donuts & Cold Brew.

Crazy breakfast confections are where Everglazed shines. Donut lovers will appreciate the sheer variety that’s available, from Classic Glazed to a savory-ish Everything Donut topped with a schmear of Boursin buttercream and a sprinkle of everything bagel seasoning and chives.

Vegans and social media influencers alike will love the Purple Glazed Ube, a glazed, bright violet donut with a pixie dusting of sparkly purple sugar. The eye-popping hue comes from the ube, a purple yam native to the Philippines that’s taken the bubble tea and dessert world by storm. Sweeter than your average sweet potato, it’s one of the more mellow flavors on the menu.

To top it all off, there are even fun seasonal offerings, so stopping by for a snack never gets stale. Wish you could sample a few of them? A dozen Donut Holes are also available in a daily assortment of flavors for $5.

You can’t have a donut without something to wash it down. Everglazed is stacked in the drinks department, especially when it comes to coffee. Java fans have tons of options to feed their caffeine addiction, whether you’re feeling a hot drip coffee with a splash of sweet cream or an icy nitro or a cold brew swirled with an array of flavored syrups.

You can even kick things up a notch with one of their Spiked Coffees, a caffeinated cocktail that blends cold brew with spirits like rum, Irish cream and cordials. Talk about a Disney adult’s dream!

Looking for something the little ones can enjoy? Along with sodas, lemonade and iced tea, kids of all ages will go crazy for Everglazed’s hand-crafted flavored milk, including cereal milk! You know yummy the leftover milk tastes after all the Fruity Pebbles are gone? Now you can have an entire glass of it.

Aside from the flavored milk, which is more petite at 16 ounces, all coffee beverages and soft drinks are a sizeable 24 ounces. They also have a ton of milk and sweetener options, so you can doctor up your coffee however you like.

Macaroni & cheese, peanut butter & jelly, coffee & donuts. Or better yet, make that a peanut butter & chocolate donut with coffee. Some things are better together. Fortunately, Everglazed made this popular pairing more portable by cheekily inviting guests to “put a ring on it.” A donut ring that is. Oh, and did we mention how ‘grammable they are? ($11, unless otherwise noted)

While donuts are certainly the stars of the show at Everglazed, this Disney World sweet spot also cooks up some other tasty handheld bites like burgers and breakfast sandwiches. While a soft bun akin to a Hawaiian sweet roll is the default bread for sammies here, you can also swap it out for a griddled glazed donut for only a buck for the ultimate sweet-and-savory situation. Round it out with a side of waffle fries for $6, or spice them up for an additional cost.

Our Take on Disney Springs’ Everglazed Donuts and Cold Brew

Ok, let’s get down to the sweet details: just how good those funky Disney World donuts were. We happened to visit Everglazed on National Donut Day of all days. Though completely unintentional (we swear!), who were we to deny this iconic breakfast pastry its special day? And oh, what a celebration it was.

Inside, the shop was decked out with balloons and banners. Walking into Everglazed, you could be forgiven for thinking you’d stepped into an extra-fancy Dunkin’. From the way the sweets are displayed to the signage that’s around, it feels… familiar. Having said that, it’s bright and welcoming with a bit of indoor seating and several tables out back, perfect for if you’d like to sit and eat rather than snack as you stroll.

We knew the lines could get long at this Disney Springs donuts shop. Fortunately, since we prefer our donuts in the morning time, we didn’t have to wait too long to survey our options – and there were a lot of them. Not to be swayed by the many tempting options, we settled on three donuts – Fruity Pebbles, Peanut Butter Explosion, and the special Icon Donut for National Donut Day – along with a Bacon Breakfast Sammie and Reese’s Nitro.

The Icon Donut was a basic iced yeast donut dressed up like the shop’s giant version outside. While the icing didn’t bring too much to the party besides a bit of color, the donut itself was fluffy and delicately sweet.

Part of The Funky Bunch, the Fruity Pebbles Donut is one of Everglazed’s more elaborate creations. It’s a yeast donut topped with strawberry icing, a generous sprinkle of the vibrant confetti-like cereal and a dollop of buttercream frosting. Much like a bowl of the childhood classic, it’s saccharine sweet. That being said, it’s very tasty and a lot of fun to eat.

Moving on to our Super Funky pick, the Peanut Butter Explosion Donut is for all the Reese’s fans out there. This yeast donut is slathered in chocolate icing and then covered with peanut butter chips, chunks of Reese’s Peanut Butter Cups and some chocolate peanut butter frosting. While it really brings home the peanut butter flavor, it’s sweet. Really sweet. So sweet, in fact, that you’re probably going to want to share.

Switching to a more savory gear, the Breakfast Sammie, while definitely not winning any beauty contests, was surprisingly tasty. Sadly, we were too excited to place our order that we completely forgot to upgrade to the griddled donut “bun.” However, that didn’t keep this simple breakfast sandwich from hitting the spot. The bacon was nicely crispy; the sweet bun cut through the saltiness of everything quite nicely. It left us hungry to try The Grilled Cheeeeeese (on a donut this time).

As for the Reese’s Nitro, this sugary concoction tasted more like dessert than coffee – and not in a bad way. Between the sweetness of the chocolate syrup and the slight saltiness of the peanut butter-infused oat milk, it’s like a liquefied peanut butter cup with a shot of espresso. Would I get it all the time? Probably not, but for folks who like their cream and sugar with a splash of coffee, this will surely hit the spot.

Are Everglazed Donuts in Disney Springs Worth It?

So, does Disney Springs’ Everglazed make the best donuts at Walt Disney World? They’re pretty high up there! While the cost may be high, especially for their more out-there flavors, their epic size and heady sweetness make them easy to share. Plus, they’re perfect for bringing a little flair to your social media feed, if you’re into that sort of thing.

If you do go, we recommend that you only leave with what you’re planning to devour that day. Donuts go stale pretty, especially if there’s cereal involved. Additionally, if you’re forced to carry them around for too long, the toppings can slide off if you aren’t careful. So, keep that in mind for the most satisfying Disney World donuts experience.

Have you tried a donut or two from Everglazed yet? If so, which ones are your favorite? Let us know in the comments! Then, save some dough for more sweet treats with our discount Disney World tickets.