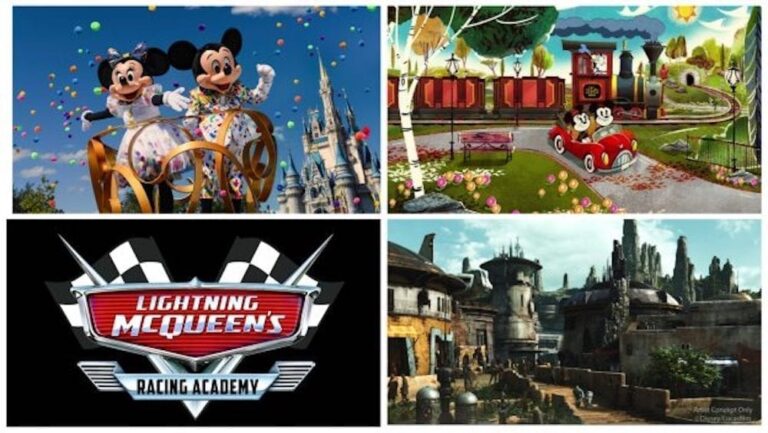 With so many new and exciting things happening all year long, 2019 is going to be an amazing time at Walt Disney World® Resort. You will travel to a galaxy far, far away and experience zany fun aboard a runaway railway. You can MousekeDance yourself silly and play basketball like the pros. Or maybe you’ll want to take in beautiful views while you dine 15 stories high atop a new resort hotel tower or glide across the sky in a gondola.

So let’s get to it! Here are 19 reasons to book a Walt Disney World Resort vacation in 2019:

1. Anything Can Happen at Mickey & Minnie’s Surprise Celebration – Starting Jan. 18, 2019, Magic Kingdom® Park is honoring those true originals, Mickey and Minnie Mouse, now, more than ever with new entertainment, merchandise and specialty food and beverages. The new “Move It! Shake It! MousekeDance It! Street Party” will parade up Main Street, U.S.A. several times daily, while you can meet Mickey and Minnie together – wearing their new birthday outfits – in Town Square Theater.

3. Say a Fond Farewell to IllumiNations: Reflections of Earth – After nearly 20 years of delighting Epcot® Guests through music, fireworks, fire torches and more, this nighttime spectacular will be ending in the second half of this year. Now, more than ever you will want to spend another evening around World Showcase Lagoon to celebrate this classic show that has entertained millions since its October 1999 debut.

4. Jaleo Cooks Up Fresh Tastes at Disney Springs – Chef José Andrés will bring the spirit and flavors of Spain to Disney Springs® with his new Jaleo restaurant, opening this winter. The tapas experience will offer a lively setting befitting its name, which means “revelry.”

5. Party with Pixar Pals at Disney’s Hollywood Studios – Starting Jan. 18, 2019, you can celebrate the park’s 30th anniversary with The Incredibles, who will host a dance party at Pixar Avenue (where Guests can also meet the one and only Edna Mode!). A door to the monster world will open at Walt Disney Presents, where Mike and Sulley from Disney•Pixar’s “Monsters, Inc.” will greet Guests. And Woody, Buzz Lightyear, Jessie and the rest of the gang are ready to welcome you into Andy’s backyard at the new Toy Story Land.

6. Disney on Broadway Concert Series Expands During Epcot International Festival of the Arts – This celebration of the visual, culinary and performing arts returns Jan. 18-Feb. 25, 2019. This year, the Disney on Broadway Concert Series will expand to seven days a week, so you can bask in live Disney magic more than ever. The festival also will feature 13 Food Studios, a variety of workshops led by professional artists, interactive exhibits and activities, and much more.

8. Take in the Topiaries During Epcot International Flower & Garden Festival –Welcome spring’s arrival with this popular festival, which returns March 6-June 3, 2019. This year’s event will feature delectable bites at outdoor kitchens, as well as dozens of world-renowned, Disney-themed topiaries. In addition, the Garden Rocks Concert Series will include three shows a day for all 90 days of the event.

10. H2O Glow Nights Return to Disney’s Typhoon Lagoon® Water Park – These evening beach parties happen Thursdays and Saturdays from May 30 through Aug. 24, 2019, transforming the water park into a new nighttime experience through special music, lighting and food. You can party with friends from Pixar’s “Toy Story” films during the 30th anniversary summer of Typhoon Lagoon!

11. New Cinematic Nighttime Experience Coming to Disney’s Hollywood Studios – As part of the theme park’s 30th anniversary, Wonderful World of Animation will debut May 1, 2019. The show will use state-of-the-art technology to take you on a magical journey through more than 90 years of Disney animation, all beginning with Mickey.

12. Disney’s Coronado Springs Resort to Open New Tower – This summer, the resort will complete a total reimagining, including the new 15-story Gran Destino tower featuring a rooftop restaurant and 545 new Guest rooms. A second new restaurant will be located on an island in the middle of the resort’s 14-acre lake, while all of its existing 1,800-plus rooms have been fully updated with new fixtures and furnishings.

13. NBA Experience Will Be a Slam Dunk at Disney Springs – This brand-new destination will allow you to participate in your own scouting report, take you through pregame preparations and let you step onto the court to make clutch shots and highlight reel-worthy slam dunks. By participating in 13 unique and innovative hands-on activities, Guests will feel like a star player.

14. Epcot International Food & Wine Festival Will Spice Up Fall – The aromas and flavors of global marketplaces will welcome Guests to the 24th year of this renowned festival. You will have a chance to meet celebrity chefs, try new food and wine pairings, and listen to great music during the Eat to the Beat Concert Series.

16. Explore Star Wars: Galaxy’s Edge – You can live your own Star Wars adventure when this deeply immersive land opens at Disney’s Hollywood Studios this fall (and this summer at Disneyland® Park in California). Guests can explore Black Spire Outpost on the planet Batuu, where they’ll find all manner of new sights, sounds, smells, tastes, characters and creatures from a galaxy far, far away. The land will also feature two thrilling new attractions: Millennium Falcon: Smugglers Run, and Star Wars: Rise of the Resistance.

17. Take a Ride on Mickey & Minnie’s Runaway Railway – Opening later this year at Disney’s Hollywood Studios, this will be the first ride-through attraction themed to Mickey Mouse and Minnie Mouse. It will feature a new original story and lovable theme song, taking your on a journey inside the wacky and unpredictable world of Disney Channel’s Emmy Award-winning Mickey Mouse cartoon shorts. New technologies will transform the two-dimensional cartoon world into an astounding multi-dimensional experience.

19. Disney’s Riviera Resort Will Be 15th Disney Vacation Club Resort – Scheduled to open by the end of this year, Disney’s Riviera Resort will reflect an elegant early 20th-century design, inspired by Walt Disney’s travels to the Mediterranean. The deluxe DVC resort is slated to offer approximately 300 family-friendly vacation home units.