23 Free Things to Do at Walt Disney World 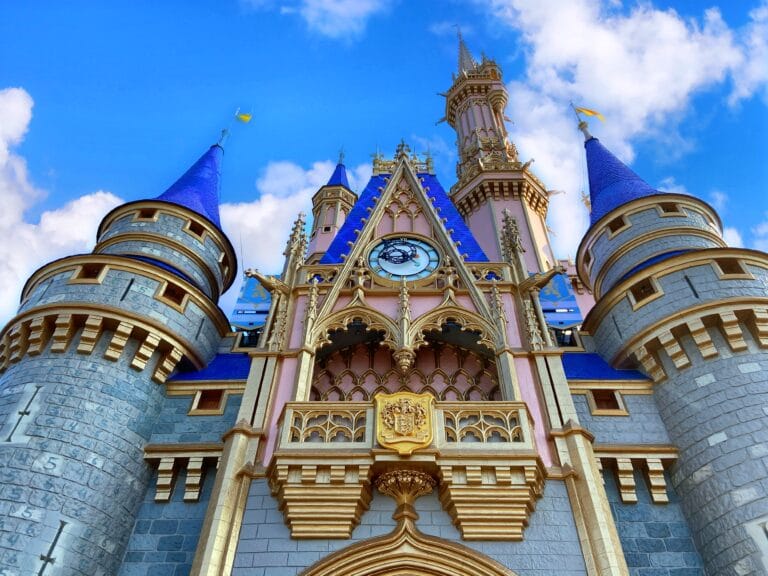 Today was a little bit different than the day before at Animal Kingdom theme park. But just a little. We’ve been attending the reopening of Walt Disney World for the past several days, writing about our experience here post-COVID.

The last 3 days we’ve been at the resort spending time at our hotel and at the two theme parks that are open: Magic Kingdom and Animal Kingdom. Our first official day back was at Disney’s Animal Kingdom which you can read about here.

Today we spend the day at Magic Kingdom theme park. The park opened at 9am so we got up at about 8am, got ready and headed over around 8:30am. 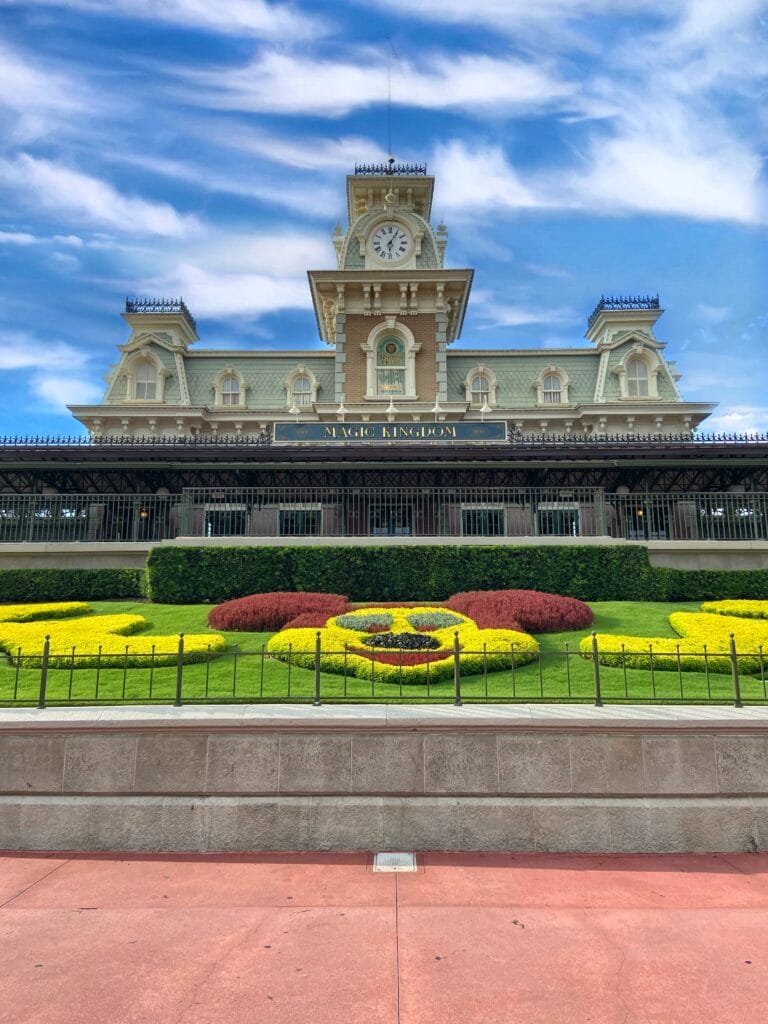 We took the monorail over which took us about 15 minutes from the Contemporary resort. Based on our first day at Animal Kingdom we figured that was no need to get there super early because there haven’t been any lines to get in.

And we were correct. Once we got off the monorail the gates were completely open and ready of us to go in! Disney is not utilizing the fingerprint scanners so no issues there, much easier to get in.

Magic Kingdom was a bit busier in the morning than Animal Kingdom was the day before. Having said that, it still wasn’t busy. We opened the app and looked at wait times for the attractions; it was about 5-10 minutes across the board. And it remained this way the entire day.

The only attraction that had a “wait time” was Seven Dwarfs Mine Train around 15-20 minutes. That was no surprise.

We headed over to Splash Mountain first to see what merchandise was left (not much) as the attraction prepares to change to its new image for Princess and the Frog. 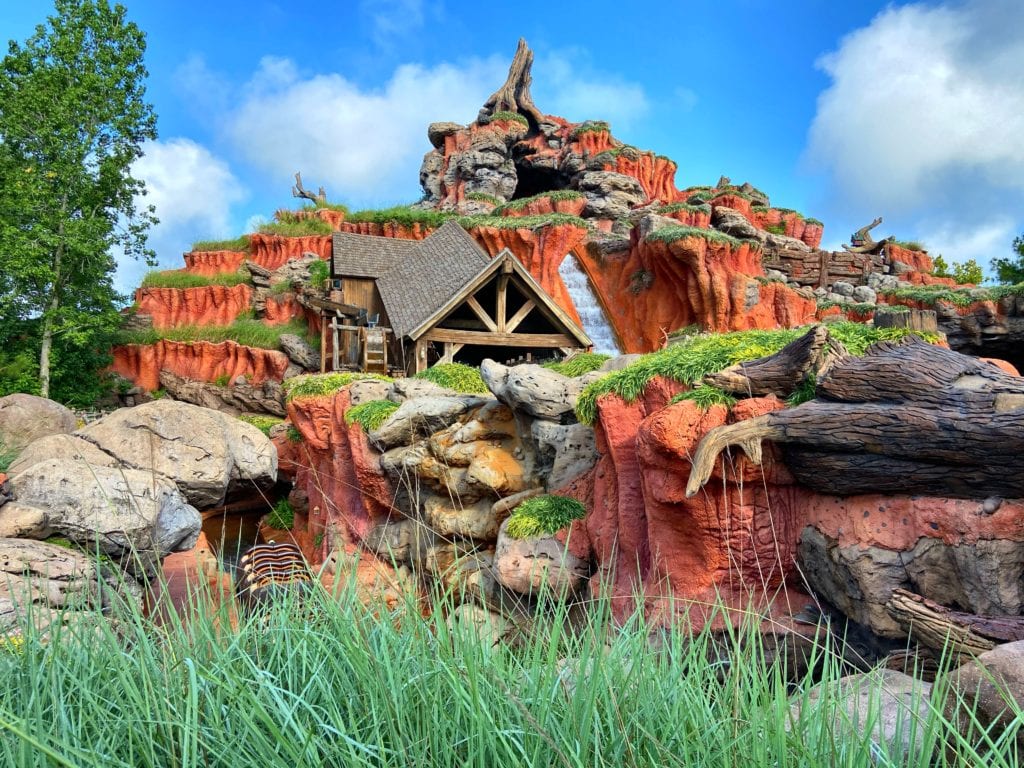 There was a virtual queue just to get into the shop to grab some merch so we signed up and waited about 15 minutes before we got our text. Once inside the shop, there wasn’t much left. Brer Bear and some shirts. We heard that must of the merchandise went the day before and Disney wasn’t doing a very good job at limiting guests. We asked the the Cast Member said we could buy up to 10 any item..

Once we were done there we headed right over to Big Thunder Mountain Railroad which had a wait time of 10 minutes. At this point we had gotten the hang of spacing ourselves out from other groups based on stickers on the ground. As the party in front moves to the next line, we move up.

Some lines look weird, like there’s more than 6 feet of space. This is usually due to the line winding back and forth. They may be a group next to you in an area that’s not blocked by plexiglass so what they do is put a marker, space 12 feet and then in between have a marker in the section next to you. 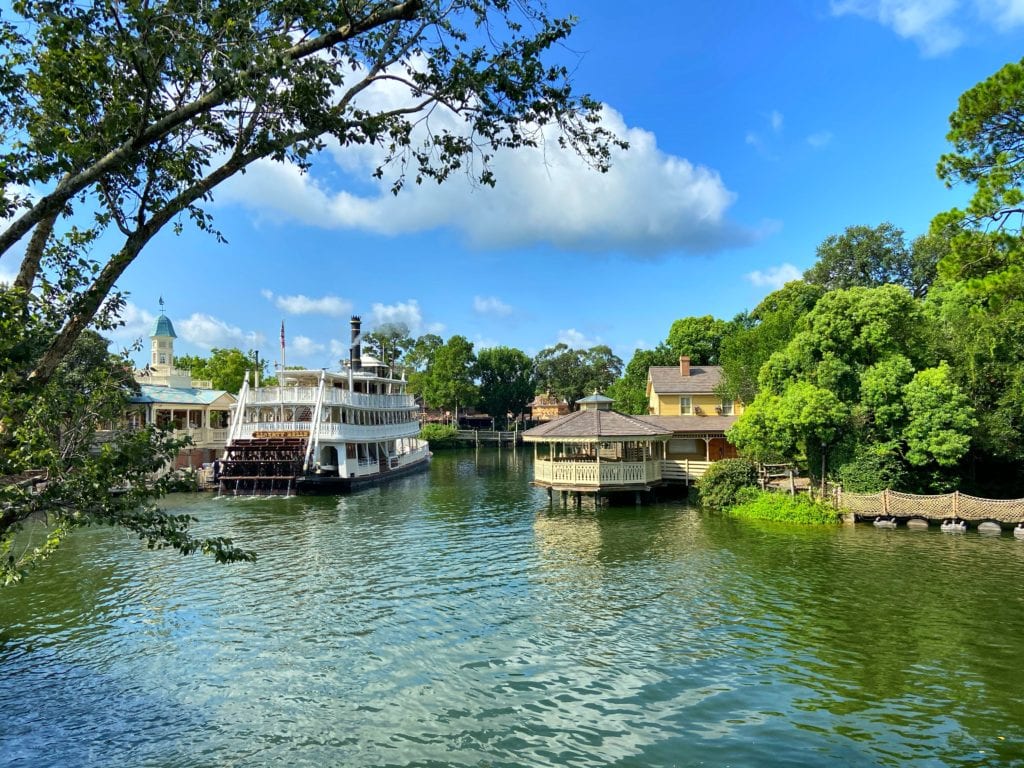 Most of the time though there is plexiglass and so this isn’t an issue. Big thunder was loading 1 group per cart, up to 4 people. If you were just 2 or 1 then you will have your own cart.

It was a hot and humid day so we headed over to the Haunted Mansion which had a 15 minute wait time but the AC felt so good once we were inside. You will skip the stretch room on this attraction because they don’t want to cramp everyone into an elevator. So you’ll head right to the Doom Buggies loading area.

They were loading groups every 3rd buggy so there was always 2 in between for distancing. Other than this, the attraction is the same! 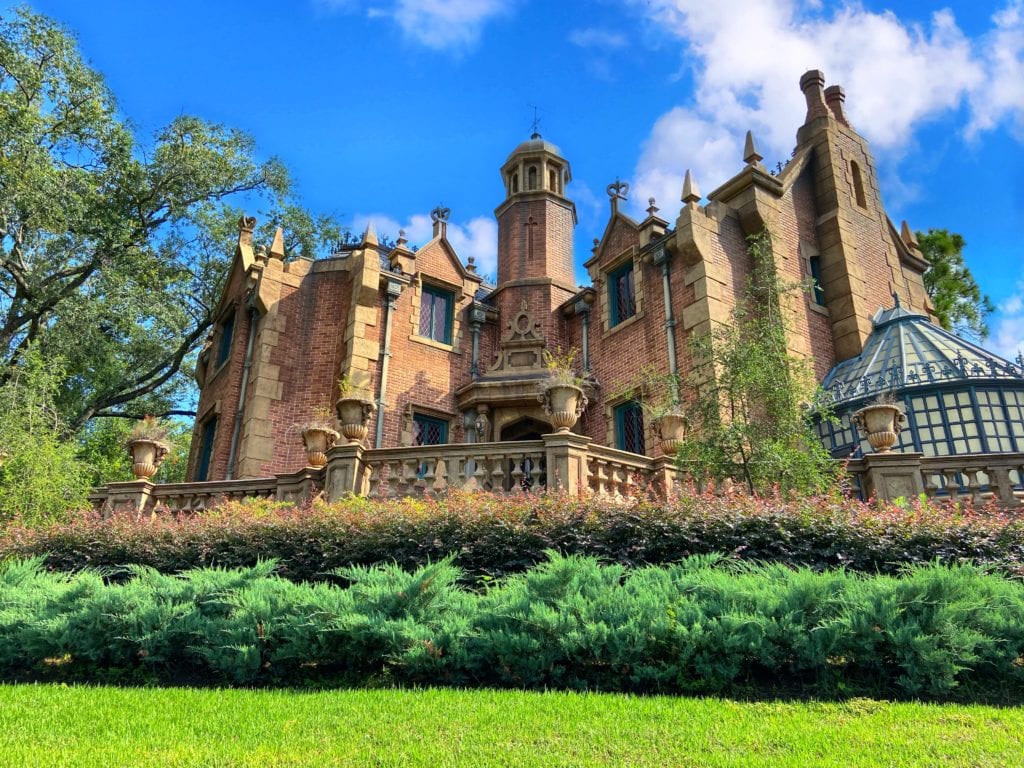 Next up for us was Pirates of the Caribbean. But first, a dance party with Mickey and friends which happened several times throughout the day. If they aren’t doing this parade, they are doing a princess one which is really cool as well. It features Merida on a horse followed by all the princesses on floats.

Pirates had a 5 minute wait and like most attractions, the longest “wait” was  just moving from line to line and a bit slower loading with less people. Considering these things, it was well done.

We did end up getting lunch at Cosmic Ray’s Starlight Cafe. Like all other dining locations, they want you to mobile order before going in. Because ours still doesn’t work, we went to a register. It was a bit longer wait that way but we didn’t have a choice.

There were plenty of tables to sit at and social distancing so tables around us were closed. Dining is a nice time to relax and take off the mask. Take your time and cool off when it’s hot outside. Drink plenty of water. Speaking of water, if you want a cup of it, just let a Cast Member know and they will let you inside without mobile ordering.

Because the park was so slow, most guests ended up spending about 4-5 hours and then started leaving. We noticed this because towards the evening time, there were less and less people around. I guess when you’re able to do everything in a short amount of time, it’s not a big deal to leave early! 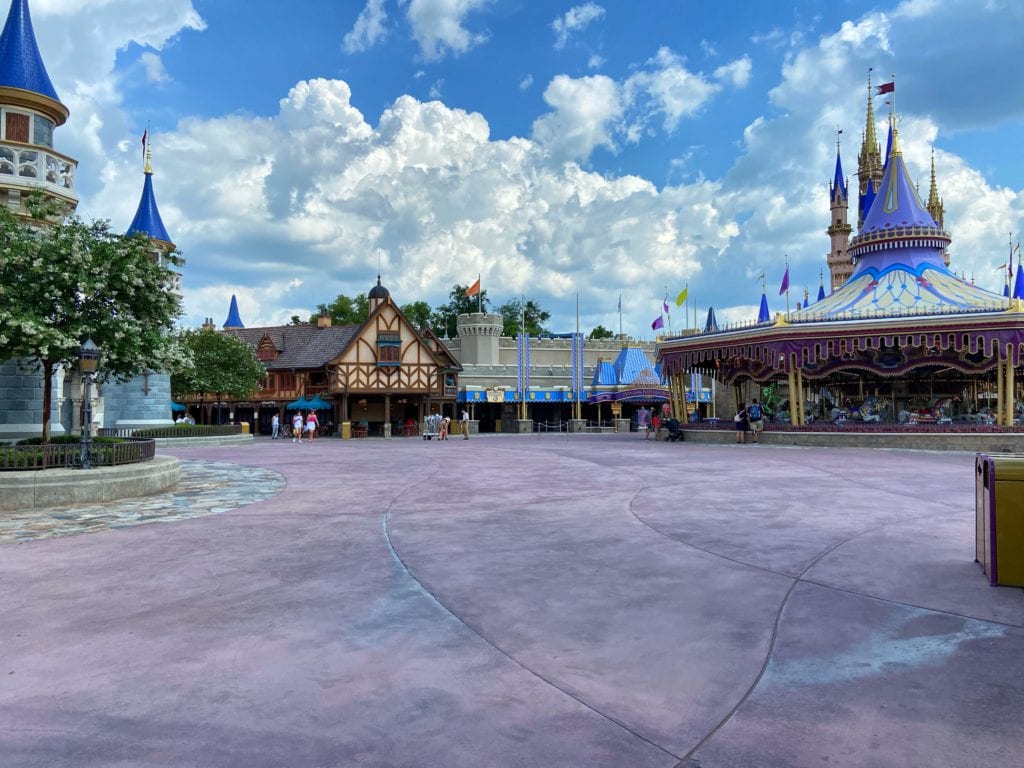 The park was open from 9am to 7pm so not super long hours but definitely enough to get it all done in one day and then some. Disney’s capacity levels are low right now and it’s hard to say how long this will last.

Our guess is overtime they will increase this.

For shows, we actually went to a few including Mickey’s Philharmagic and Bear Country. Mickey’s was great because of the AC and the small line. There were social distancing lines throughout and once you got to the theater entrance each party was given a dot to stand on. Once the theater was ready each group went in and chose a row. 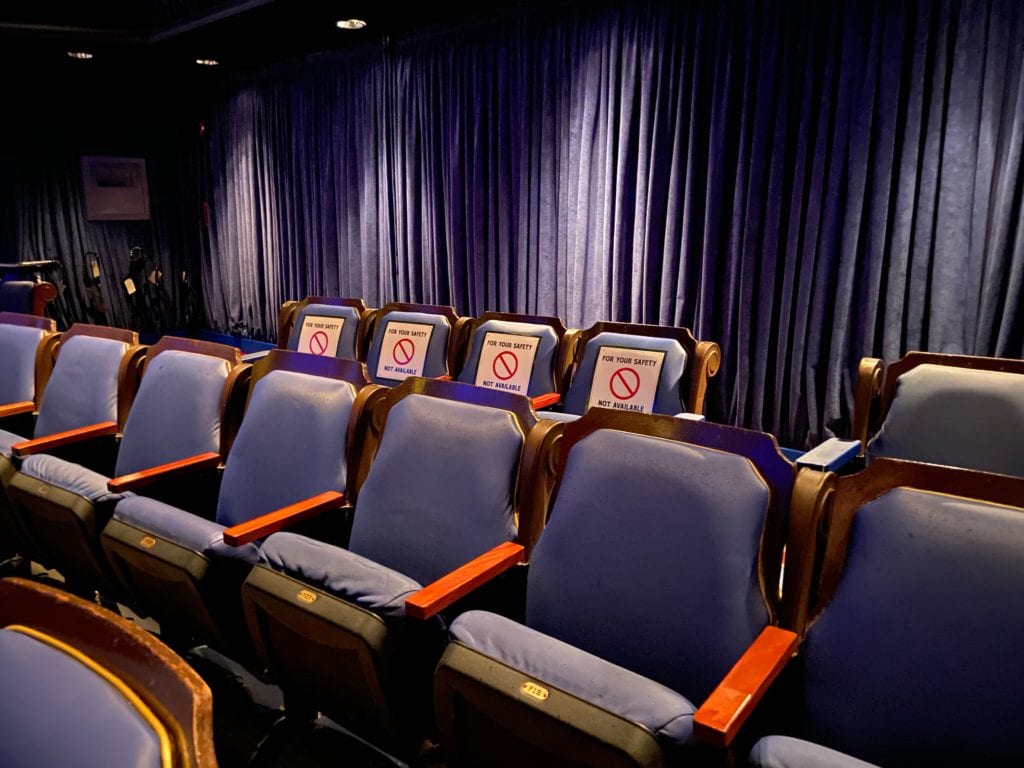 Seats were marked so that groups could sit without being next to others. Typically about 4 seats in between. Every other row was blocked off as well.

It was the same way with Bear Country Jamboree. We ended up waiting a bit longer for this one because they cleaned the entire theater before we went in. All attractions and shows do get a thorough wipe down every so often so sometime you have to wait a bit longer.

Overall our day at Magic Kingdom was fantastic. We got everything done really quick, felt safe and loved speaking and being with the Cast Members. Everyone is so happy to be back and welcoming. Guests are following all the new safety measures and nobody complaining. 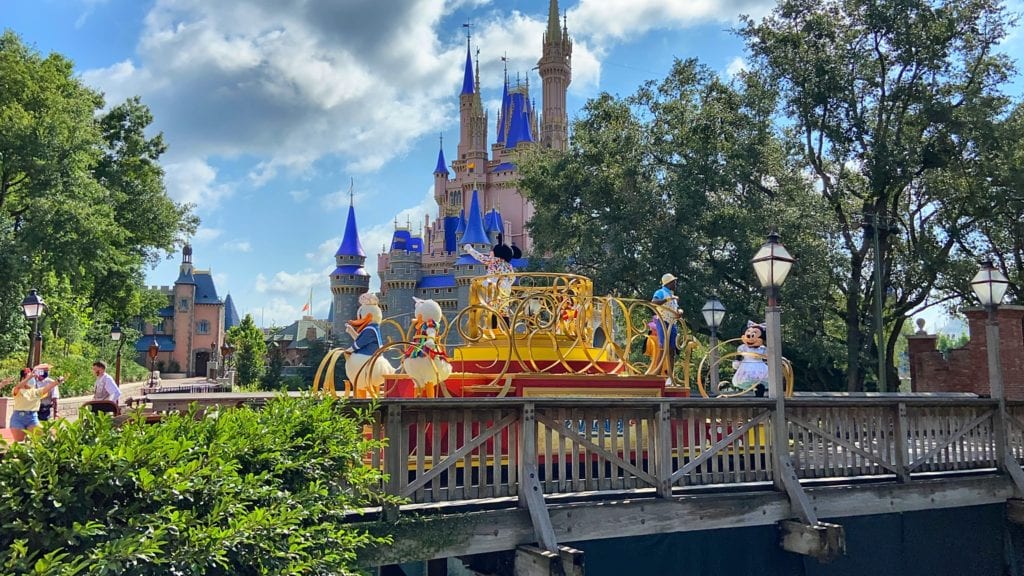 If you are thinking about visiting, we sure to read through Disney’s official health guidelines and take a look at all our Journal Entries to see what it’s like to be at the parks post-COVID.

Of course, do what you feel comfortable. If you’re not ready for the parks quite yet, that’s fine! Reservations are available through the end of this year and into 2021.

Until next time, cheers!