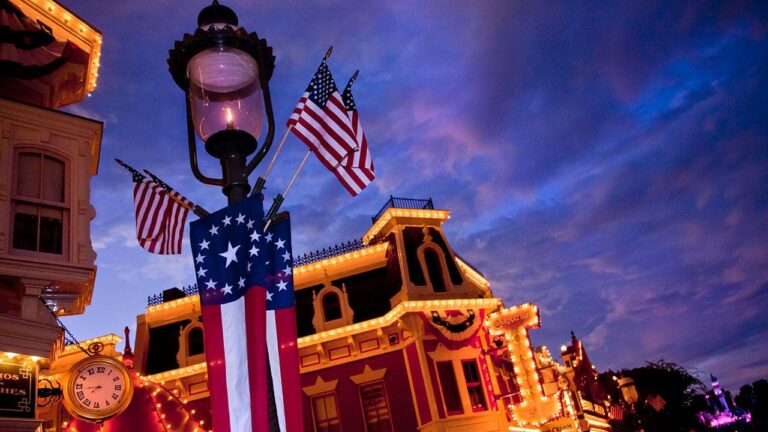 Planning to spend Independence Day at Disneyland? 4th of July can be a great time to visit The Happiest Place on Earth. Whether you’re hoping for all-American dishes, patriotic music or colorful fireworks, there’s something for everyone. So, wave those stars and stripes proudly as we break down everything on offer for the Fourth of July at Disneyland Resort.

Without a doubt, one of the most popular – and, as a result, busiest – times to go to Disneyland is during the holidays. While most people think of The Happiest Place on Earth as a must-go destination during Halloween and Christmas, the Fourth of July is also a downright magical time to visit Disneyland. (As long as you don’t mind fighting the crowds, that is.)

From limited-time desserts bedecked in red, white and blue to a patriotic fireworks spectacular, and possibly even some special decorations, there’s a whole host of things available to help you celebrate Independence Day at Disneyland and California Adventure.

Just keep in mind that with Disneyland’s Park Pass Reservation System in place, you won’t be able to just waltz into the parks without some pre-planning. Fortunately, the Downtown Disney District is home to some delicious dining perfect for your 4th of July visit, with no spendy park ticket or hard-to-come-by Magic Key Pass required.

It wouldn’t be the 4th of July without a smorgasbord of American-style eats. Fortunately, along with some seasonal treats available only for the holiday, guests can choose from an array of restaurants offering tasty dishes that would be right at home at any Fourth of July celebration.

Although there are a couple of exceptions, most of the limited-time menu offerings are on the sweet side. So, we recommend you stick to one of the Disneyland restaurants dishing up tasty American cuisine for lunch and dinner and save the star-spangled sweets for dessert.

As for the main course, there is a buffet of options when it comes to quintessential American food worthy of your Independence Day at Disneyland, whether you’re craving cookout classics like burgers, hot dogs and BBQ, light sandwiches made for a day at the beach or cozy comfort food favorites just like grandma used to make.

Other All-American Eats for Independence Day at Disneyland Resort Restaurants

So, what else can you do in honor of the Fourth of July at Disneyland Resort besides eat? Surprisingly, a whole lot! From quintessential attractions and special entertainment with all-American credibility to a glittering fireworks finale, you’ll find it all at The Happiest Place on Earth.

No 4th of July is complete without a fireworks show – and that goes for Disneyland, too. Luckily, guests at The Happiest Place on Earth can choose from two different patriotic displays, a full fireworks spectacular at Disneyland Park and a short, pyrotechnic preview at Disney California Adventure Park.

Unfortunately, unlike at Walt Disney World, this pyrotechnic ode to the stars and stripes is only shown on the Fourth of July. So, if you can’t snag a park reservation, be prepared to watch snippets of the show from outside the park. The show takes place at 9:30 PM on July 4, 2022.

For the best views of A Fourth of July Concert in the Sky, try to find a spot in front of Sleeping Beauty Castle, on Main Street, U.S.A. between the Main Street Train Station and Central Plaza, in front of “it’s a small world” or in Frontierland along the Rivers of America. For an especially sparkly evening, you can also take in the Main Street Electric Parade as it twinkles through the park before the fireworks at 8:45 PM or after the grand finale at 10:45 PM.

While Disney California Adventure doesn’t offer a full fireworks show for the Fourth of July, it does have a petite, patriotic pre-show before the first showing of World of Color, starting at 9:00 PM on July 4, 2022.

While the mellowest of Disneyland’s nighttime spectaculars doesn’t normally feature fireworks (it uses a kaleidoscope of fountains and vibrant lighting instead), the World of Color – 4th of July Tribute kicks things off with a bang, thanks to a special pyrotechnic display set to an America-inspired soundtrack.

Walt Disney once said, “I get red, white and blue at times.” So, while food and fireworks are highlights of any Fourth of July celebration, it’s no wonder they aren’t the only ways you can pay homage to the United States at Disneyland and Disney California Adventure Park this Independence Day – including a Walt Disney original.

If you’re heading to The Happiest Place on Earth for Fourth of July 2022, don’t miss these America-lovin’ Disneyland attractions and special entertainment offerings.

A 15-minute stage show starring an Audio-Animatronic version of our 16th president, this true Disney treasure premiered for the very first time at the 1964 New York World’s Fair. After the show, learn more about another great American in the attraction’s current Frederick Douglass exhibit.

Though held daily, this poignant ode to the Stars & Stripes and Armed Forces is a must for the Fourth of July. Listen to patriotic tunes performed especially for July 4th by the 1st Marine Division Band and honor current and former military members as the flag is retired for the evening.

If you can’t make it into the park on the Fourth of July, you can still celebrate our country’s independence and salute local military members during a live performance on July 3 by the 40th Infantry Division Band from the California Army National Guard.

After the special July 4th Flag Retreat Ceremony, stick around for more patriotic tunes played by the 1st Marine Division Band in a special live performance.

While not particularly patriotic, it doesn’t get more American than a nostalgic road trip down Route 66 (or, in this case, through Ornament Valley and the quaint town of Radiator Springs.

Part of Disneyland’s Celebrate Soulfully event in honor of African American heritage, tap your toes to live jazz performances in Carthay Circle, from the big-band flavor of the ‘20s and ‘30s to a capella doo-wop with a modern spin.

Pay tribute to the Red, White and Blue at this live concert by “The Old Breed Brass Band.” Performances will be offered on both July 3 and 4, so you can celebrate your right to party whichever day you visit.

The Soul of Jazz: An American Adventure

Take a melodious trip through the history of jazz, America’s most soulful musical genre, and its place in African American culture at this temporary exhibit adjacent to Star Wars Trading Post.

So, my fellow Americans, what are you hoping to do for the Fourth of July at Disneyland and California Adventure? Have you celebrated Independence Day at The Happiest Place on Earth? Let us know in the comments! Then, exercise your liberty to save some cash with our discount Disneyland tickets. 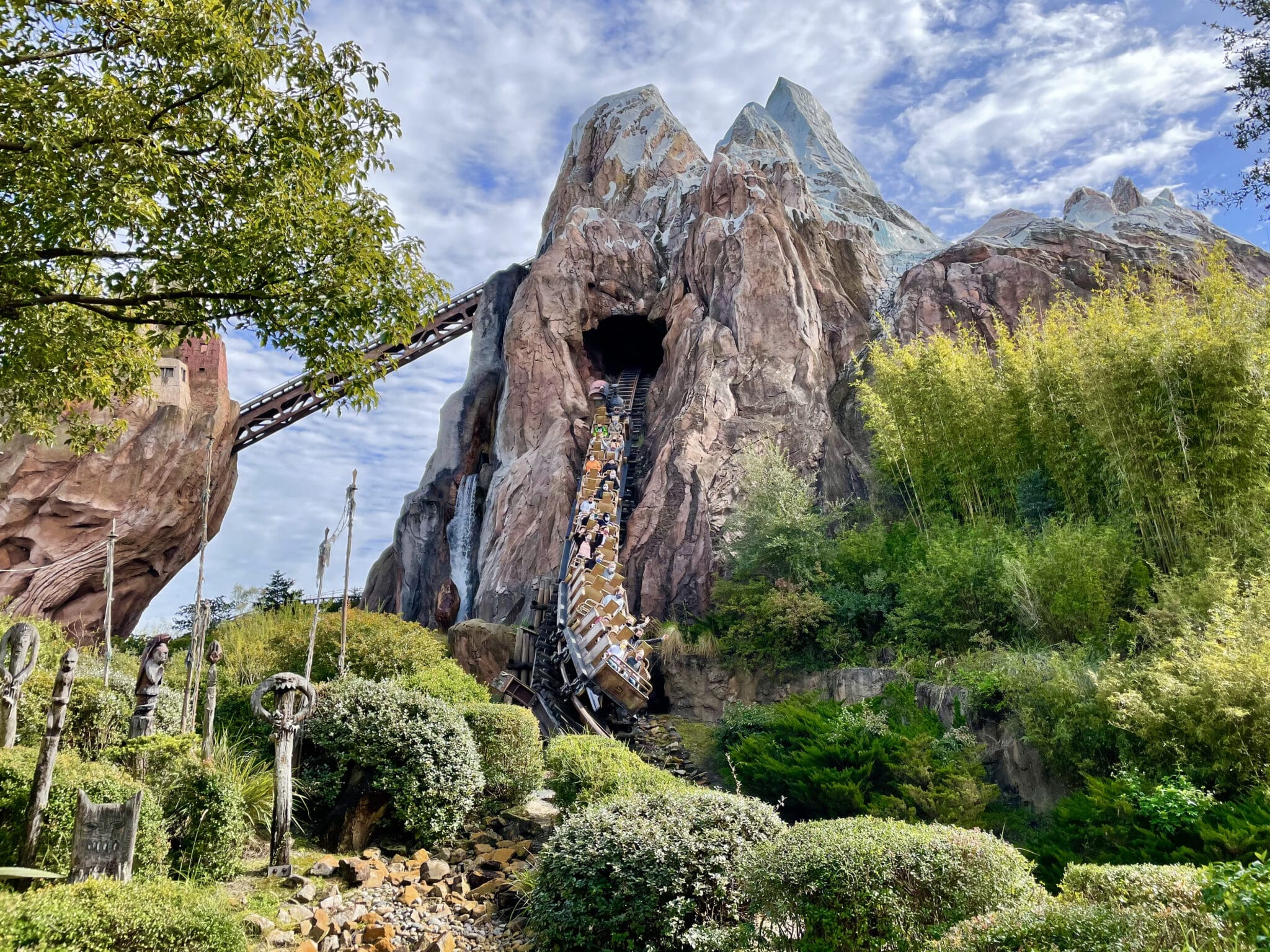