Everything You Need To Know About Parking at Disneyland 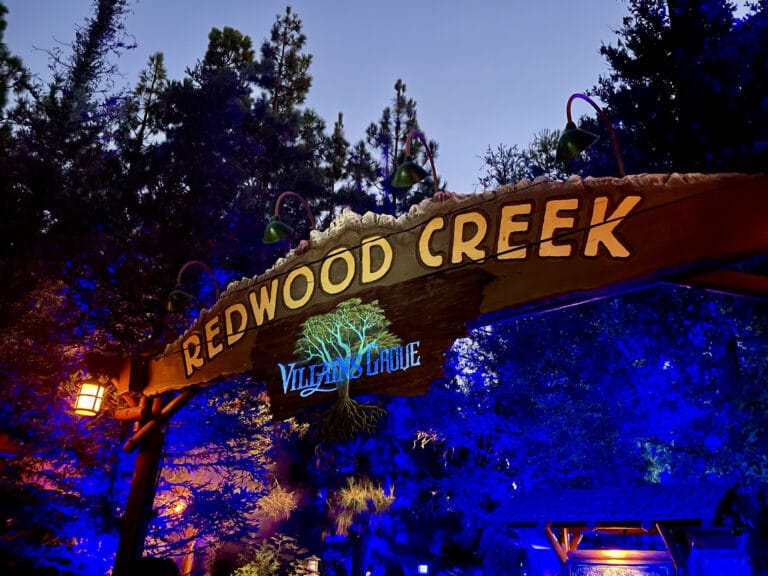 The Oogie Boogie man is back at California Adventure! The Oogie Boogie Bash is one of my very favorite Halloween traditions, and it did not disappoint this year! Oogie Boogie pulled out all the stops with amazing villain interactions, the Frightfully Fun Parade, lots of candy, and new this year: the Villain’s Grove.

Oogie Boogie Bash is a separately ticketed event at California Adventure that is now sold out. If you were lucky enough to snag tickets, or if you are already thinking ahead to next year, this guide is for you! The party runs from 6:00-11:00pm; California Adventure will be closed during these hours to those who do not have a ticket to the Oogie Boogie Bash on these remaining party dates:

Although the party doesn’t start until 6:00pm, your Oogie Boogie Bash ticket allows you to enter California Adventure early at 3:00pm. The line to get into the park will be long at the front gate, but there will be little to no line through the Grand Californian entrance! This is a super convenient and lesser known entrance from the hotel that takes you right into the park, close to the Grizzly Rapids ride. 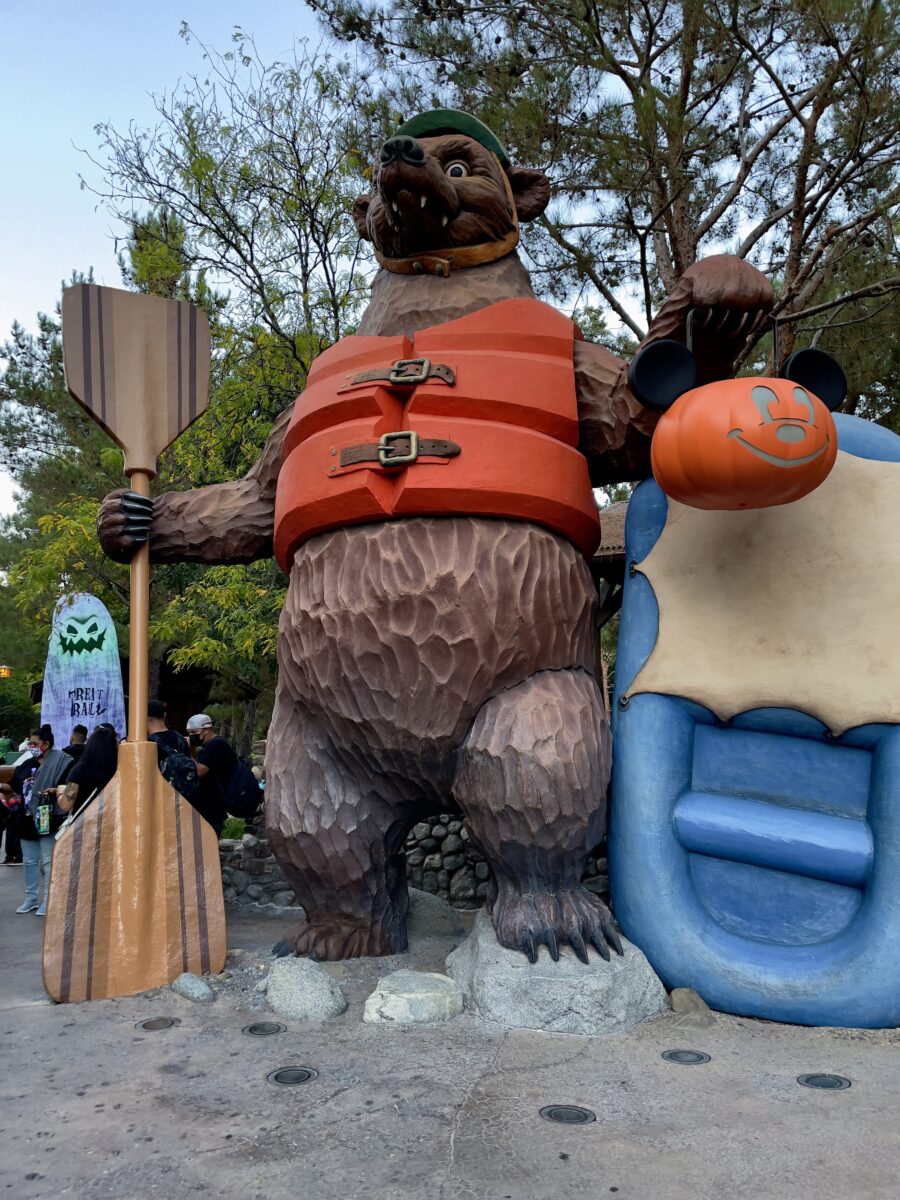 As a bonus, you’ll be able to see the Oogie Boogie display made completely out of sugar in the hotel lobby. Once you walk through the hotel and get to the security and entrance booth, have your Oogie Boogie Bash ticket ready to show. Once you are in the park, you will be given your party wristbands, a map/party guide, and your treat bags.

If you arrive for the 3:00 early entrance, enjoy some rides and eat dinner before the party starts so that you can really maximize your time enjoying everything the party has to offer once it begins! If you have some more popular rides like Soarin’, the Incredicoaster, Guardians, or Radiator Springs Racers on your list to do, keep in mind that those lines will be significantly shorter during the party. The park capacity is much lower, which means you’ll be able to run onto rides with little to no wait times. Just one of the many perks of attending a separately ticketed event!

At 6:00pm, you’ll hear the host Oogie Boogie himself announce that the party has begun. Spooky music will set the mood, and everyone who does not have a wristband for the party will be asked to leave. Now it’s time to party! 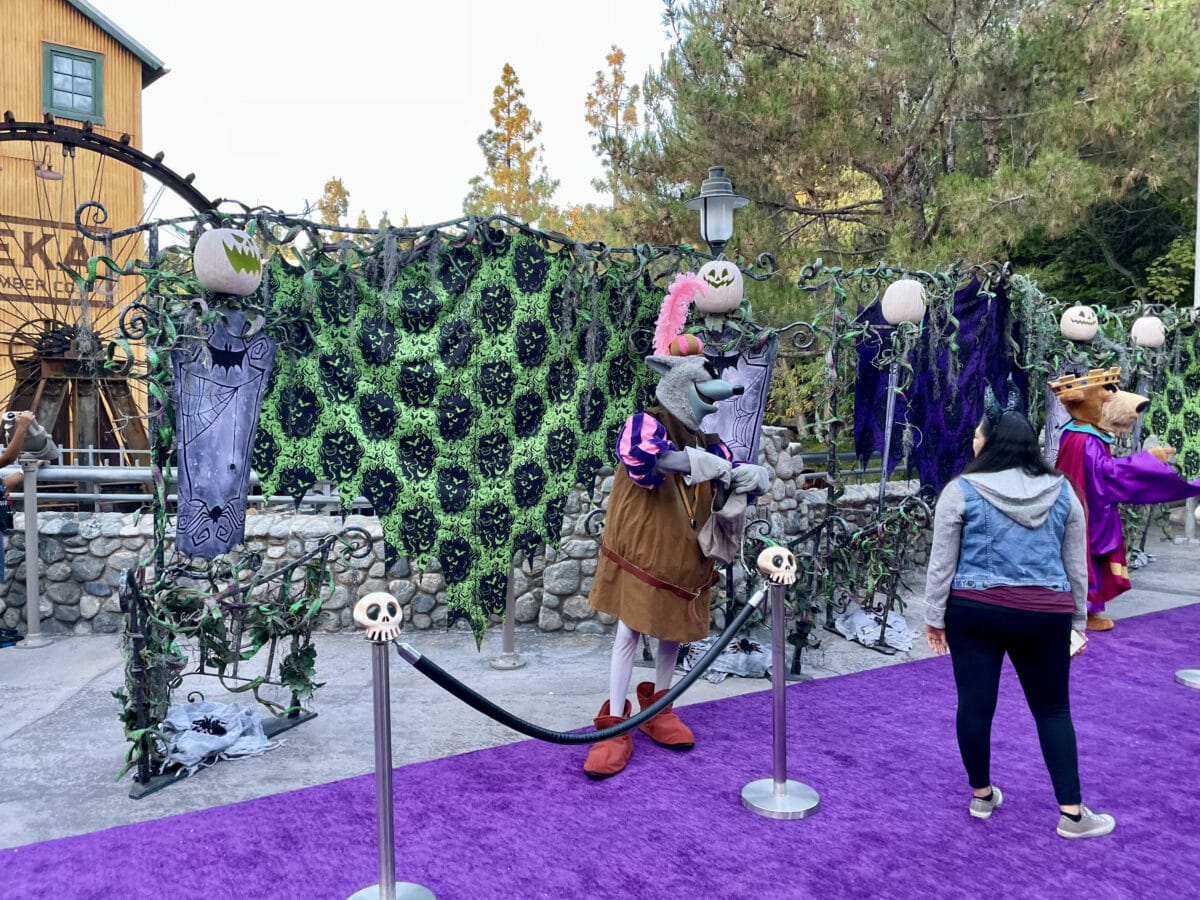 There are 10 Treat Trails to go trick-or-treating during the Oogie Boogie Bash; plan on getting a lot of candy! The bag you are given will not be enough to hold all the candy if you hit all 10 treat trails. You may want to bring a big empty backpack or larger bag to empty your candy into at some point in the night. The cast members are very generous with how much candy they give, especially closer to the end of the night. In addition to candy, there are also snacks and fruit handed out. Some candy stations have bagged apple slices, grapes, pretzels, graham cracker bites, and pirate’s booty. We also received some cute Nightmare Before Christmas temporary tattoos at one of the treat trails as well.

In addition to stocking up on Halloween candy, the majority of the treat trails have character interactions. These villains are a huge highlight of the Oogie Boogie Bash! Each villain is sitting/standing on a themed stage. They will talk to you as you walk through the treat trail, always while staying true to character. Don’t be surprised if Sid pokes fun at your costume, or even your kids! Starting on Carthay Circle and going around the whole park, the treat trails are:

One of the big highlights of the night for my family was the Villain’s Grove. It is a must-do! The Redwood Creek Trail has been completely made-over for a spooky walk-through that is mesmerizing for both kids and adults! Be sure to save this for once it is completely dark outside. Complete with fog, lights, and spooky music, it is the perfect Halloween experience, and such a fun addition the the party this year. 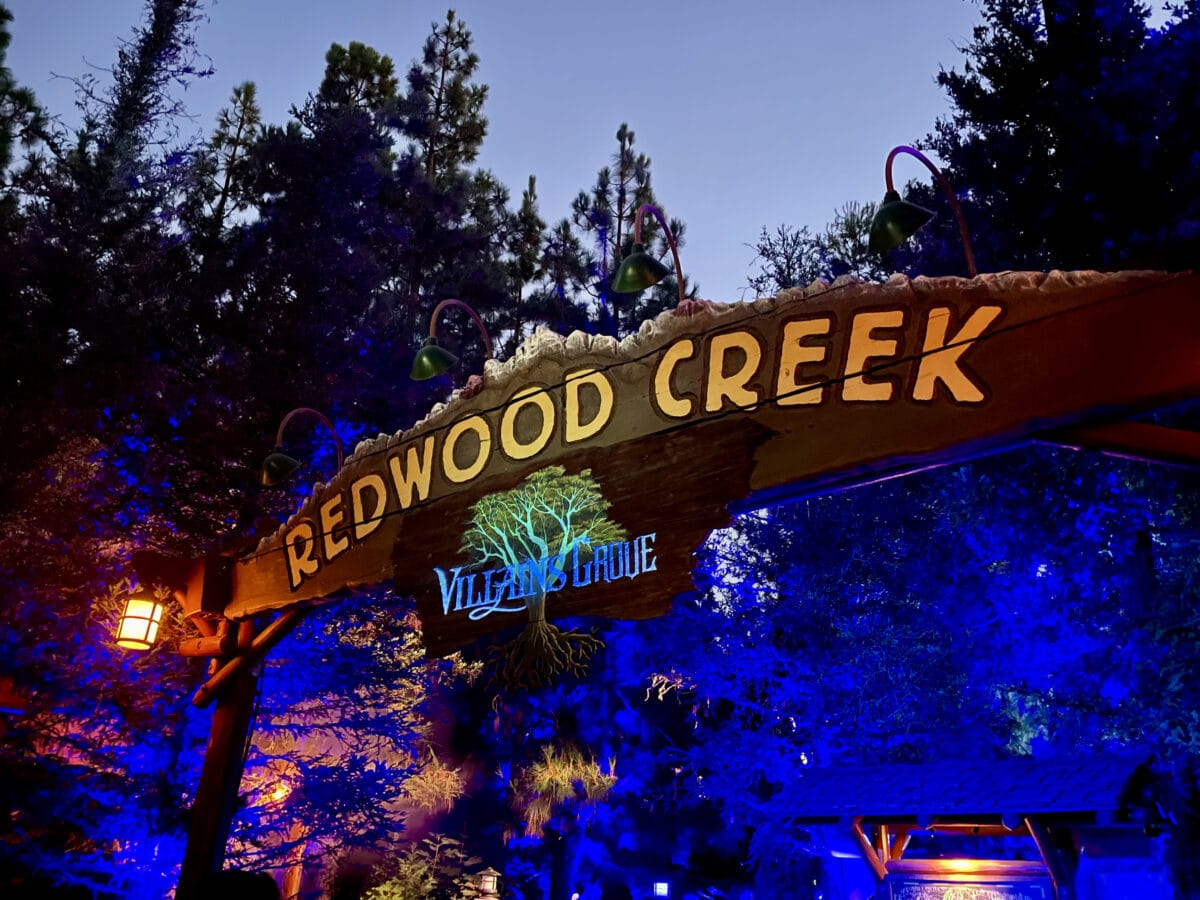 Each area is inspired by a Disney villain, including Frollo from The Hunchback of Notre Dame (eery floating candles, this spot’s villain influence isn’t as obvious) Maleficent, the Cheshire Cat, the Queen of Hearts, Scar, and Dr. Facilier. There is an amazing light show in the trees that at one point had my daughter asking, “are we inside or outside?” The line to get in will be long, but don’t let it deter you! It moves quickly and you won’t regret doing it at least once!

Across from the Monsters Inc. ride over in Hollywood land, Mickey and Minnie host their own little party that is of course a hit for little kids! You can join them for a costume party with dancing and a fun story. This only happens at 6:15, 6:55, 7:35, 9:00 and 9:50, so you will need to plan accordingly to make it to one of the party times. I recommend attending while you are in Hollywood for Oogie Boogie, Cruella, and the Mad Hatter treat trails; that way you don’t have to back track.

We are SO happy a parade is back! This was the first parade we have attended since Disneyland and California Adventure’s closure in March 2019. There are two parades during the party: 7:45 and 10:00pm. Parade spots are always easier to get for the later time, however since the capacity is low for this party, you shouldn’t have to wait too early to snag a spot for the 7:45 parade either. 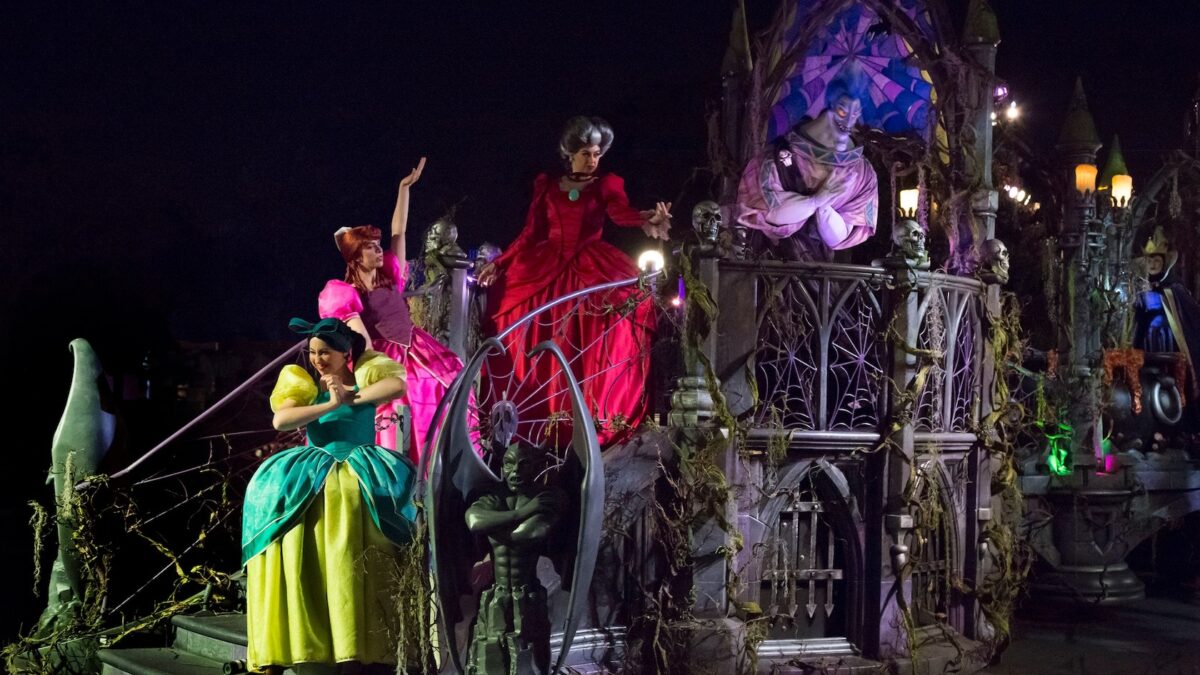 The parade starts in the back corner of the park, near the restaurants and Silly Symphony Swings. If you choose to watch the 7:45pm parade, you could find a spot at the beginning of the parade’s path and grab dinner with the conveniently located restaurants. This keeps your wait time for the parade short since you’ll be seeing it first, and maximizes your overall party time since you can eat dinner while waiting for it to begin!

My family has done this with a few other parades in the past and it has worked well. Once the parade is over you will want to enjoy Pixar Pier, otherwise you’ll be stuck behind the parade trying to go the other direction.

The Frightfully Fun Parade has all the Disney Halloween classics: villains, evil step-sisters, a Haunted Mansion float, and the Headless Horseman kicking off the parade! In previous years, the Headless Horseman was a bit more spooky for kids as he slowly walked down the parade path to eery music. This year, he’s accompanied by some friends from the Colonial time period, and moves to slightly more upbeat music. It is such a fun addition to the parade and a Disney Halloween party classic! Don’t miss the statue off of Carthay Circle as well!


Web Slingers
One of the great Oogie Boogie Bash perks is that there is no virtual queue for the new Spider-Man ride, Web Slingers! We didn’t ride it this time, but passed by it near the end of the night and saw that the line was 20 minutes long. If you haven’t been on the ride yet, definitely make it a point to during the party! It is a great opportunity to experience it without having to try and get into the virtual queue and then wait in a long line.

Short lines
As I mentioned before, the capacity is much lower than a typical night in the park. We ran onto a couple of rides with no wait time at all. Popular rides that usually have a long line are only about 20 minutes long. We attended the party with a large group of 4 adults and 5 kids; we were still able to hit all the treat trails, watch the parade, and ride Toy Story Mania, Soarin’, the Cars Land rides, Guardians of the Galaxy, and Little Mermaid all just during the party hours. If you do go on some rides, you might not be able to hit everything the party has to offer, so you will just want to prioritize what is most important to you that night!

We came across Mickey and Minnie in some new Halloween clothes this year across from the Little Mermaid ride, posed and waiting to take pictures with you with the Pixar Pal-A-Round in the background! Covid protocols still do not allow you to hug or interact with the characters up close, but you can talk to them and pose for a photo with a rope barrier in between you. Seeing the characters around the park was definitely missed when Disneyland and California Adventure first re-opened this year, so I will happily take what I can get with that rope barrier! The characters add so much to the magic.

Food
Exclusive food will be available just during the Oogie Boogie Bash at Flo’s Cafe in Cars Land. Just for party guests, there will be Buffalo Chicken Fries, Chili Fries, and Loaded Gravy Fries. And of course, keep an eye out for Halloween themed treats throughout the park that are available all October long!

ROAD MAP FOR THE NIGHT 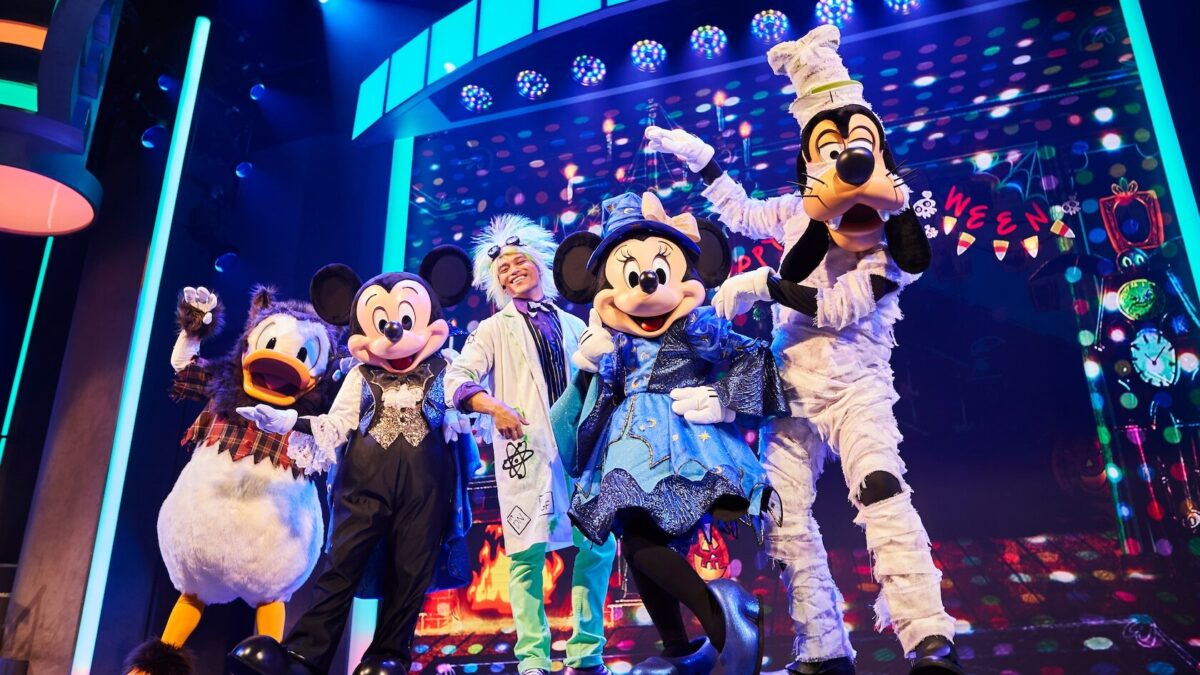 There is definitely no wrong way to do the Oogie Boogie Bash. For some people, having a schedule adds stress to the night instead of optimizing the fun. If following a schedule is not your thing, my general recommendation for any Disney trip is always to have a couple of rides or experiences that you definitely do not want to miss, and then let the day take you wherever you end up!

So many magical moments or small Disney details can be lost in running from one thing to the next trying to cram everything in. That being said, if you really want to optimize your few hours at the Oogie Boogie Bash, I do recommend having a general game plan and following the Treat Trails in order so that you don’t have to back track. You can go either way around the park, but here is the direction we took, and how our night looked:

We had such an amazing night and can’t wait for next year! If you snagged tickets to the party this year, let us know your favorite part! 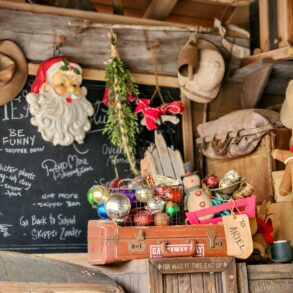 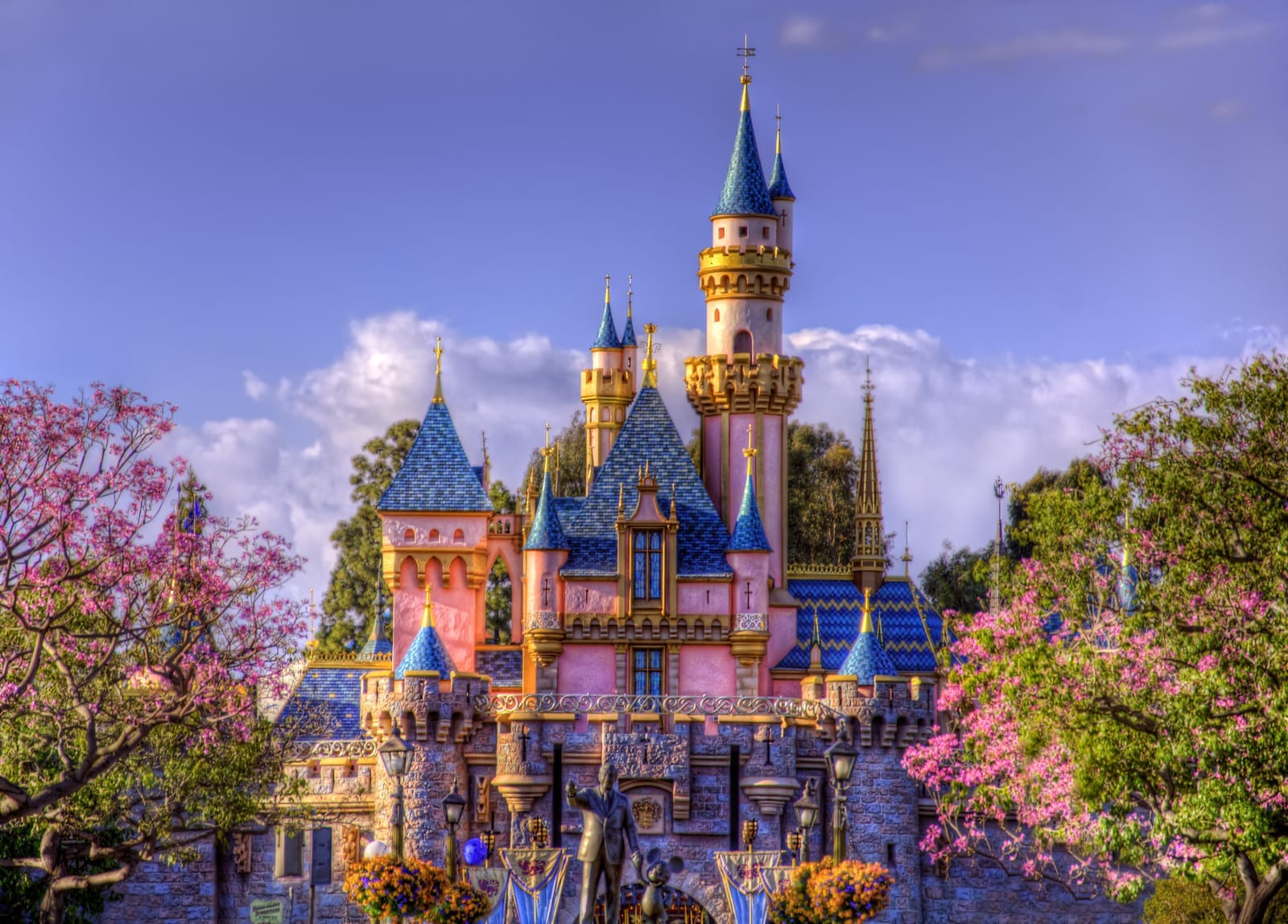