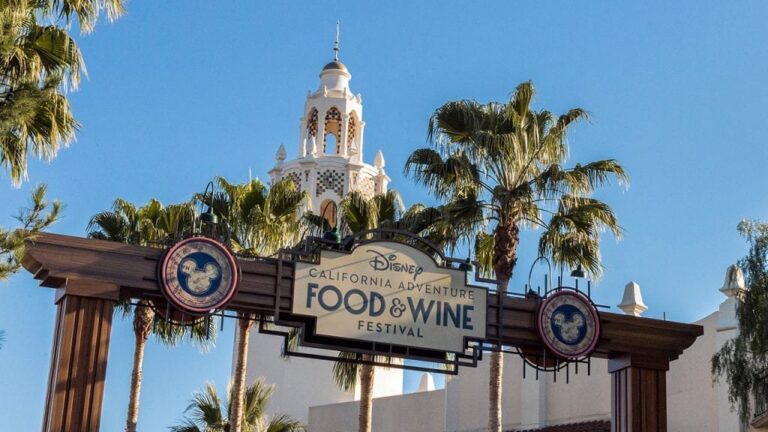 On hiatus for the past two years, the Disney California Adventure Food and Wine Festival has happily made its delicious return, and we couldn’t be more excited (or hungry!). This weeks-long feast inspired by the Golden State runs for almost two full months, from March 4 to April 26, 2022.

So, if you’re hoping to join the celebration, put on your stretchy pants and bring your appetite as we quench your thirst for details on this popular foodie festival at Disneyland.

Food and Wine Festival 2022: A Tasty Way to Celebrate the Golden State

While there are several other gastronomic-themed activities to enjoy at this epicurean event, one of the highlights of the Disney Food and Wine Festival at California Adventure Park is all the yummy things to eat and drink. It even says so in the name!

Along with the return of great educational offerings like cooking demonstrations, tasting seminars and winemaker receptions, guests can also dig into a buffet of festival-exclusive dishes and drinks at dining locations across the Disneyland Resort, from Festival Marketplaces to restaurants at Downtown Disney and California Adventure. 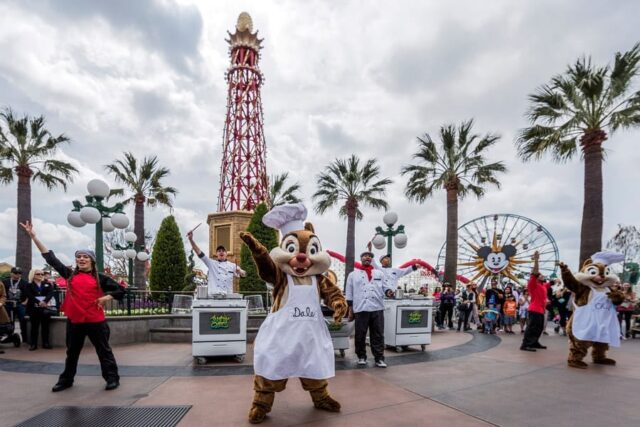 With so many tempting possibilities on the table, you may find it difficult to narrow it down or stick to a budget. Relax, we’re here to help with a few helpful hints for maximizing your culinary experience while minimizing the damage to your wallet and sanity.

Hoping to try as much Disney California Adventure festival food as possible without breaking the bank? Or, maybe you’re looking to further your foodie experience beyond just stuffing yourself silly on items from the various Festival Marketplaces and restaurants at California Adventure?

Here are our favorite tricks for doing the Disneyland Food and Wine Festival right:

While you could keep all the food to yourself, not only do you end up getting full faster, but you also spend more overall. Instead, team up with a friend or your family members to try even more items while keeping your food costs low.

Save Time By Ordering All Your Festival Food at Once

All of the festival menu items can be purchased at any of the food booths. So, if you know all the dishes and drinks you’d like to try, skip the hassle and the crowds by purchasing everything from the Festival Marketplace with the shortest line. Then, flash your extra-long receipt to a cast member at each food booth to pick up your bounty stress-free. 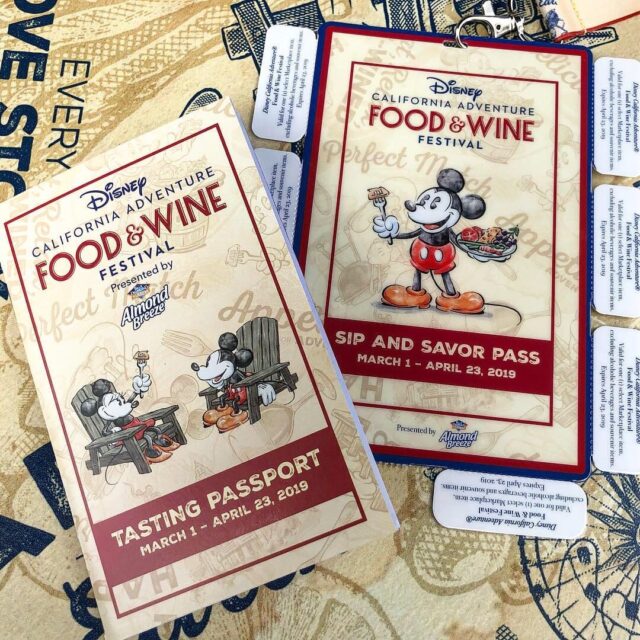 Disneyland’s seasonal festivals can get expensive quick, especially if you want to try as many of the limited-time menu items as possible. That’s where the Sip and Savor Pass comes in – share it with a friend to save it all for yourself.

Eight food and beverage entitlements keep your snacking simple and your travel budget on track. Best of all, if you’re strategic with your ordering and choose the most expensive items available, you can even save a few dollars.

Rest Your Feet and Eat to the Beat During Live Music

While you could nosh on your festival feast anywhere around Disney’s California Adventure Park, why settle for standing awkwardly somewhere when you could kick back, relax and tuck in while a live band provides the soundtrack? Live music, starring acts from the Golden State, takes place throughout the day at both the Paradise Garden Bandstand and Palisades Stage.

Wish you could create your own California-style cuisine back at home? Expert-led cooking demonstrations by visiting, local and Disney chefs make for a fun – and free! – way to improve your skills in the kitchen.

If you’re a fan of booze – be it beer, wine, cocktails or even sake – and you have room in your budget, you may want to book a seat at one of the festival’s alcohol-soaked education & tasting seminars. For those on a budget but still wanting to learn and imbibe at the same time, the $25 seminars held at Sonoma Terrace in California Adventure make for a fascinating and surprisingly affordable way to do some drinking at Disneyland.

Looking to treat yourself? Ringing in at $95 and $75 a pop, the handful of sessions in the Disneyland hotels –the Grand Californian Hotel & Spa and Disneyland Hotel, respectively – are pricey. Even more so are the spendy winemaker receptions, costing either $140 or $275, perfect if you want to splash out. 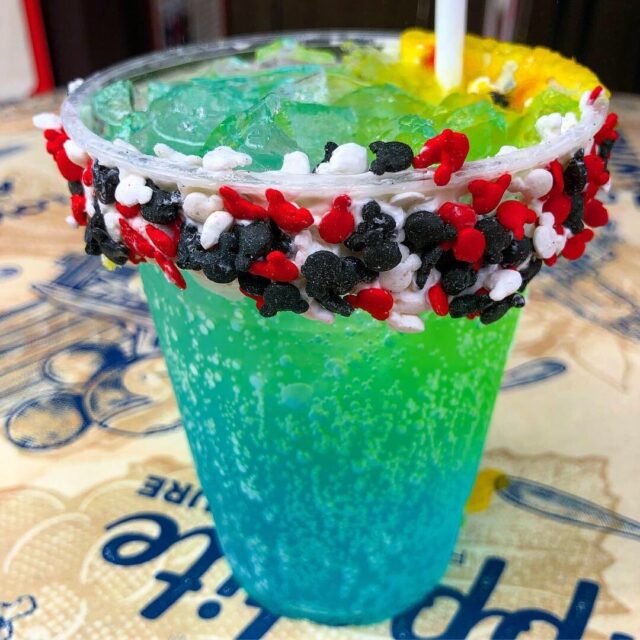 If you couldn’t already tell from the location and the name, the Disney California Adventure Food & Wine Festival pays homage to the gastronomic bounty of the Golden State. Whether it be Festival Marketplaces highlighting California-fresh ingredients, dishes inspired by the state’s tapestry of cultural cuisines at different Disney California Adventure restaurants, or Friends of the Festival dining at Downtown Disney District, this food-driven party has it all.

No need to worry about guests with dietary restrictions or picky eaters, as a variety both vegan and vegetarian items will be on offer alongside more kid-friendly flavors. It’s a great excuse to do some drinking at Disneyland.

While you’re eating, be sure to wash it all down with a glass of Napa Valley wine, a fun cocktail or a refreshing beer crafted right there in the state. For those who like a bit of bling with your drinks or kiddos who get a kick out of colorful lights, you can even add a fun glow cube shaped like grapes (in red or green, of course) to any drink. Just buy one from any of the Disney California Adventure Food and Wine Festival 2022 locations.

California Adventure Festival Marketplaces, along with epicurean educational events (plus tastings for some), are the stars of this savory show. For 2022, guests can indulge in 12 different Festival Marketplaces. Best of all, since the Disneyland Culinary Team were busy bees during the pandemic, most things on offer are completely new.

Like other festivals at Disney California Adventure, most are located in Paradise Gardens Park. However, there are other seasonal food booths spread along the path up towards Buena Vista Street, as well as in Grizzly Peak. 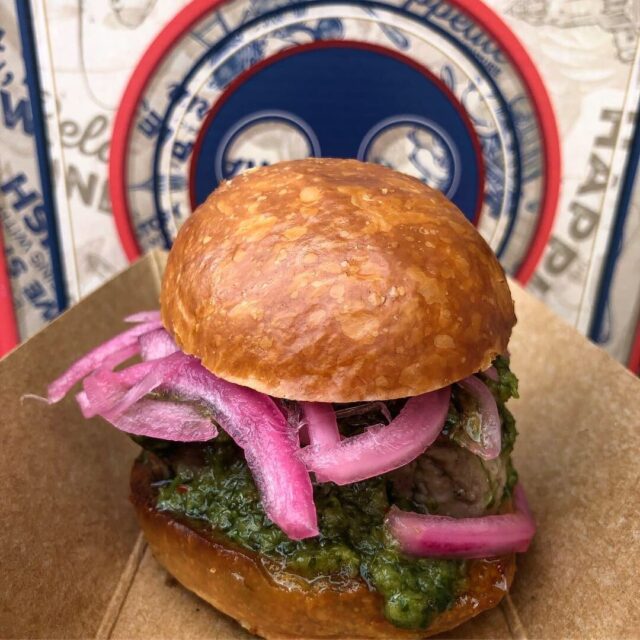 Items with an (S&S) can be enjoyed with a Disneyland Sip and Savor Pass.

Berry Patch | Across From Entrance to Avengers Campus

Cluck-a-Doodle-Moo | In Front of The Little Mermaid

D•Lish | Near Entrance to Avengers Campus

I ♥ Artichokes | In Front of Sonoma Terrace

LA Style | Near the Studio Store

Nuts About Cheese | Across From Entrance to Avengers Campus

Uncork California | Across From Entrance to Avengers Campus

Don’t want your gourmet adventures to end? Thanks to a smorgasbord of Friends of the Festival menu offerings and special events at several Downtown Disney restaurants, it doesn’t have to.

Along with the festival drink option below, Downtown Disney’s Naples Ristorante e Bar is also holding  Wine Down with Pizza & Pinot to celebrate Disney California Adventure Food and Wine. Available on March 11, March 25 and April 8, this Italian-inspired soiree invites you to create your own wood-fired, Neapolitan-style pizza, then sip on a glass of expertly paired pinot chosen just for your pie.

In addition to the seasonal beverage below, Tortilla Jo’s at Downtown Disney District will also be offering a special Sips and Salsa Event (Get it? Food & Wine, Sips & Salsa?) throughout the festival. Held on March 18, April 1 and April 15, these tasting events – headlined by reps from acclaimed tequila brands – will feature samples of a variety of tequilas and lessons on how to make and pair several salsas.

Well, fellow Disneyland foodies, that is all the tempting options at the California Adventure Food and Wine Festival. Have you sunk your teeth into this Disney Food & Wine Festival? What dishes are you most looking forward to or missing this year? Let us know in the comments!

All The Latest Planning Tips In 1 Simple Email
Go to Appearance > Customize > Subscribe Pop-up to set this up.
<a href="https://www.pinterest.com/pin/create/button/?url=https%3A%2F%2Fwww.parksavers.com%2Ffood-and-