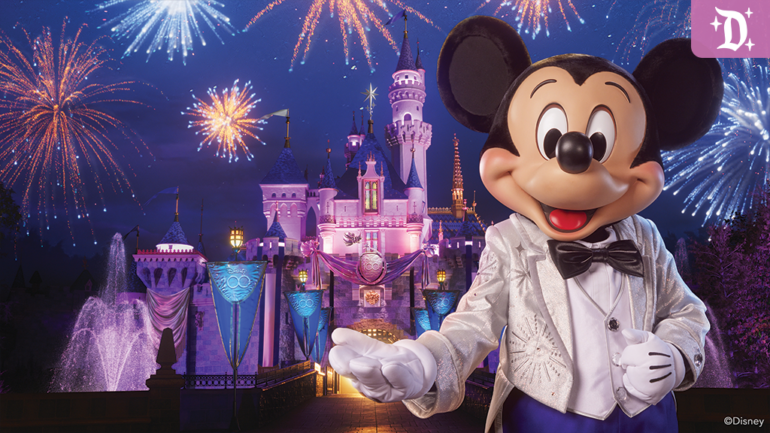 The Walt Disney Company marks its 100th anniversary this year, and beginning Jan. 27, the Disneyland Resort will commemorate the milestone with new experiences, entertainment and more throughout 2023.

Disney100 will celebrate our incredible storytellers and creators, along with the fans and families who’ve brought us into their hearts, as they together spark the magic and wonder of Disney. This celebration honors the journey we’ve been on and the memories we’ve created together, and it will bring new experiences with our beloved characters along with heartwarming new stories.

We can’t wait to have Guests join us to celebrate at the Disneyland Resort! From an all-new attraction and entertainment to dazzling décor and special food and beverages, here’s everything you need to know about the 100th anniversary happenings at The Happiest Place on Earth – and more magic to come later in the year. 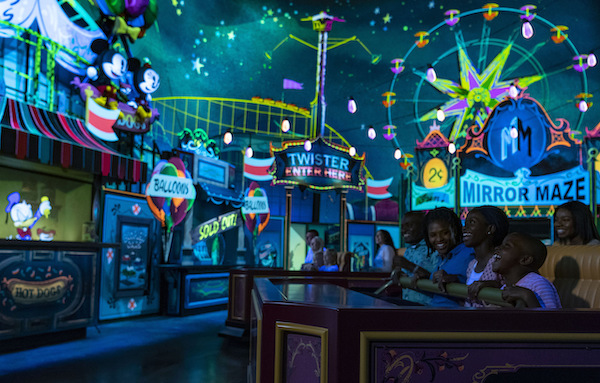 Beginning Jan. 27, Mickey Mouse and Minnie Mouse will star in their very first ride-through attraction at the Disneyland Resort! Inside the El CapiTOON Theater in Disneyland Park (which houses an exhibit unique to Disneyland), this family-friendly experience transports Guests into the wacky and unpredictable cartoon world of Mickey Mouse and Minnie Mouse, where Guests will board a train engineered by Goofy and embark on a zany adventure.

To experience Mickey & Minnie’s Runaway Railway when the attraction opens, you’ll need to join the complimentary virtual queue, which is only accessible via the Disneyland app. There will not be a standby line for this attraction at this time. The virtual queue enrollment times will be twice daily, at 7 a.m. and 1 p.m. PT. Learn more at Disneyland.com. Guests may also get quicker entry to this attraction with the purchase of an individual Lightning Lane arrival window, subject to availability. 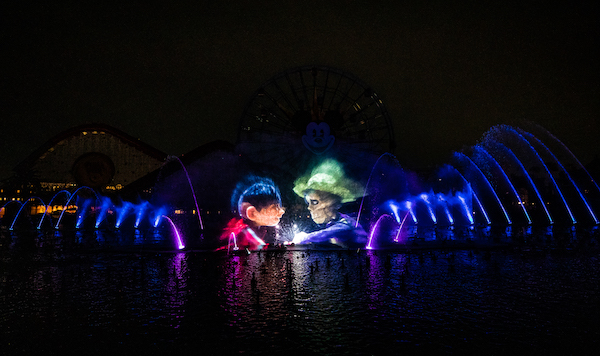 This all-new nighttime spectacular at Disney California Adventure Park celebrates the storytelling legacy started by Walt Disney, illustrating how a single action, like a drop of water, creates a ripple that can grow into a wave of change. This is the first Disneyland Resort nighttime spectacular to feature characters, music and moments from Walt Disney Animation Studios, Pixar Animation Studios, the Avengers and Star Wars in the same production. Here is a sneak peek at the new show from Disney Live Entertainment!

Guests will be able to access the viewing area for “World of Color – ONE” through the virtual queue system available only via the Disneyland app. Distribution for the complimentary virtual queue will begin at 12 p.m. PT, daily (subject to availability) and is available for guests who have entered Disney California Adventure Park for the day or have entered Disneyland Park with a Park Hopper ticket. More information and how-to details are available on Disneyland.com. Joining the virtual queue is not required, but it is highly recommended as walk-up viewing options for each performance are available on a first-come, first-served basis. 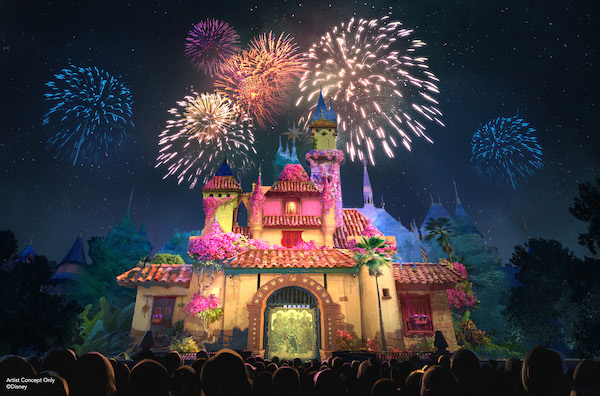 Each evening at Disneyland Park, “Wondrous Journeys” transforms Main Street, U.S.A., Sleeping Beauty Castle, the façade of “it’s a small world” and the Rivers of America into an artist’s canvas with lighting effects, customized projections and more. This nighttime spectacular by Disney Live Entertainment will take you on an epic adventure through 100 years of Walt Disney Animation Studios storytelling. On select nights, “Wondrous Journeys” takes to the skies with sparkling fireworks. Check out this behind-the-scenes look at the recording session for the show’s original song, “It’s Wondrous.”

During both “World of Color – ONE” and “Wondrous Journeys,” your MagicBand+ will come to life with dancing lights and vibrations synchronized to the shows.

Both theme parks, the Downtown Disney District and the Hotels of the Disneyland Resort will be adorned in beautiful, platinum-infused décor. Above is an artist’s concept of the elegant embellishments on Buena Vista Street at Disney California Adventure Park, which will sparkle with platinum banners and Disney100 medallions.

Around the resort, Guests will find platinum statues and medallions (pictured above) – which make great photo opportunities! Soon, we’ll share more details on how MagicBand+ will interact and add more dazzle to select Disney100 décor later this year.

At Disneyland Park, Sleeping Beauty Castle will be accented by two new water fountains and dressed in platinum banners and bunting, a magnificent cabochon and a shining wishing star. On Main Street, U.S.A., Guests may find Mickey Mouse, Minnie Mouse and their pals in platinum-inspired looks designed to reflect the optimism and creativity that are at the heart of everything Disney.

Feeling hungry amidst all these festivities? Savor a century of magic through specialty food and beverages like the platinum trifle and potato and cheddar cheeseburger. Plus, Guests can collect novelties such as the Disney100 Mickey Mouse sipper and platinum Mickey Mouse balloon bucket. Guests can check out the full Disney Eats Foodie Guide to the Disney100 anniversary celebration at Disneyland Resort here!

Guests can also bring the magic home with commemorative Disney100 merchandise and collectibles released throughout the year, such as the Disney100 Platinum Celebration Collection, special MagicBand+ designs, collectible medallions and pressed pennies.

We’re excited to announce that The Disney Gallery on Main Street, U.S.A., at Disneyland Park will house a new exhibit inspired by Walt Disney’s vision for Disneyland to be where his films come to life. Inside, you’ll see beautiful artwork created by original Disney animators for some of Walt’s early films, alongside artwork concepted by original Disney Imagineers to recreate those stories in the park.

The exhibit will also display an animator’s desk, a model of a multi-plane camera and more. It’s a magnificent tribute to Disney films that became Disneyland Resort attractions, park experiences that later inspired Disney films and the rich traditions they both share. 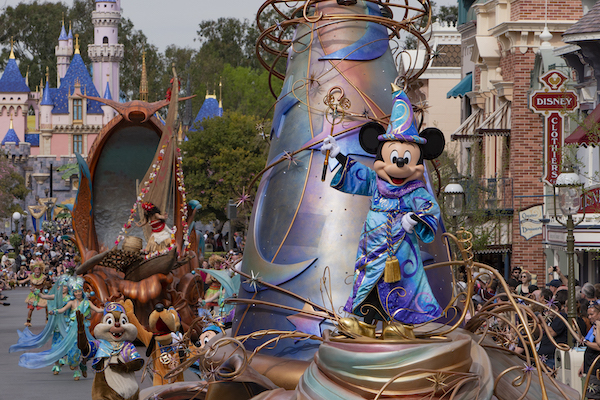 Even more fun is still to come! The “Magic Happens” parade makes its highly anticipated return to Disneyland Park on Feb. 24. Led by Mickey Mouse and his pals, the daytime spectacular celebrates moments of magic from Walt Disney Animation Studios and Pixar Animation Studios films with grand floats, artistic costumes and an energetic musical score. 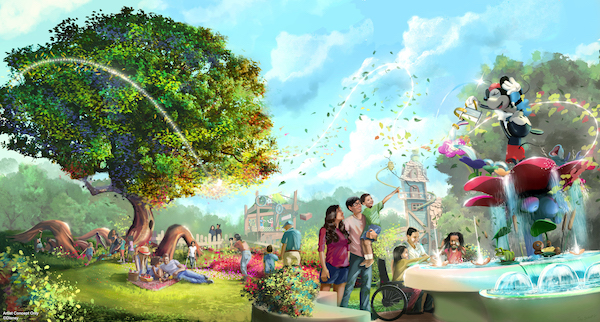 Mickey & Minnie’s Runaway Railway will be joined by additional new experiences and returning favorites when the reimagined Mickey’s Toontown reopens on March 8, 2023! The beloved land will feature more play activities and attractions than ever before, as well as grassy play spaces for you to unwind.

There’s so much to look forward to this year at Disneyland Resort! 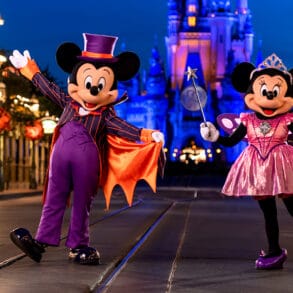 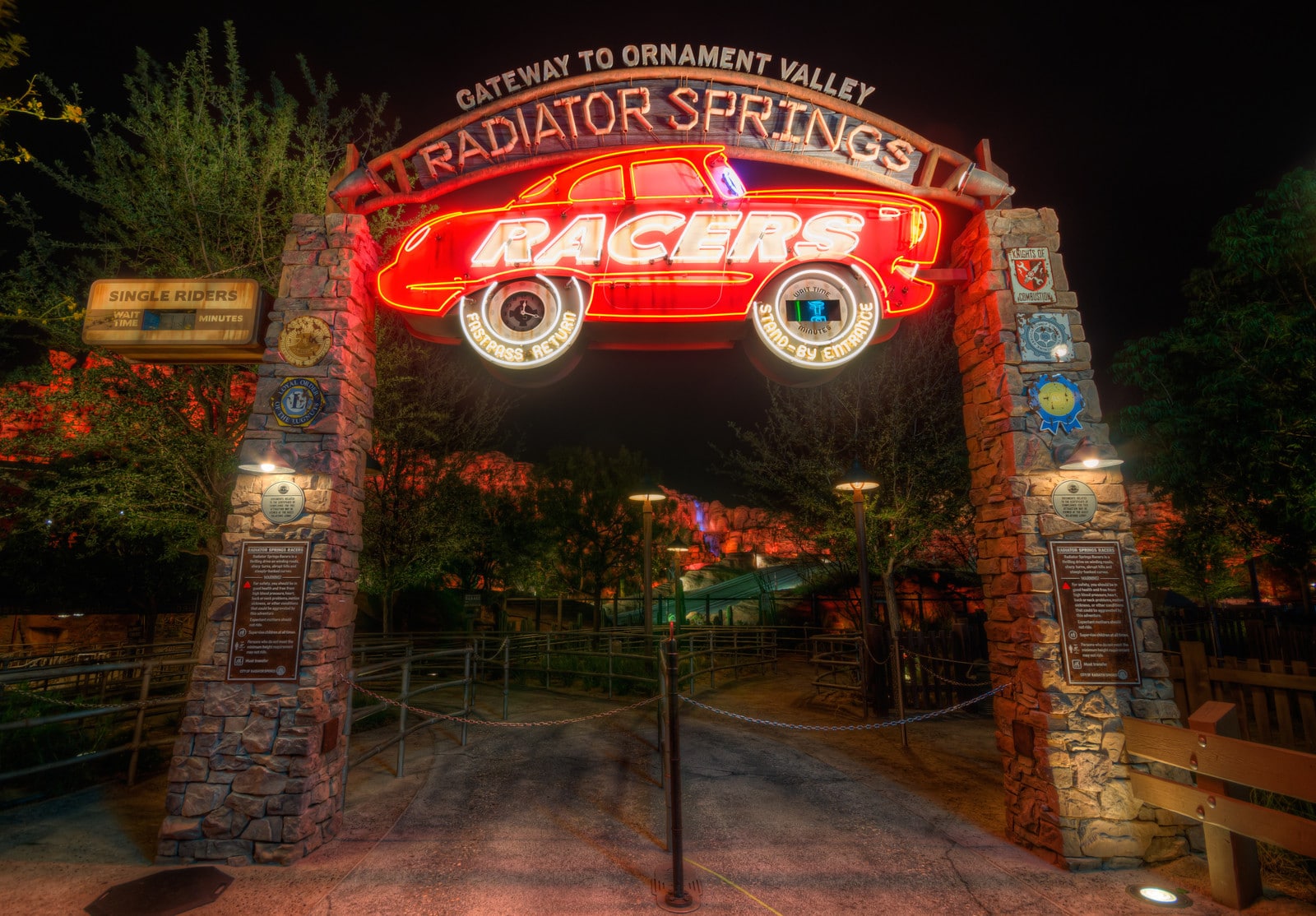