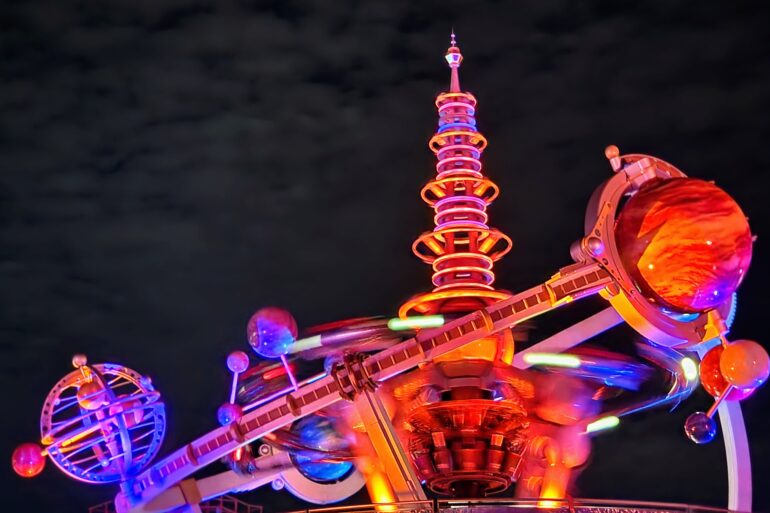 As the ridiculously catchy theme song of Walt Disney’s Carousel of Progress goes, “there’s a great, big, beautiful tomorrow shining at the end of every day”—and you’ll find it all in Magic Kingdom’s Tomorrowland. With a retro-meets-modern cityscape of shining spires and metallic towers, this futuristic section of Magic Kingdom Park brings to life a tomorrow that Walt Disney always dreamed of.

Thanks to popular attractions like Space Mountain and Buzz Lightyear’s Space Ranger Spin, no visit to Magic Kingdom is complete without exploring Tomorrowland. And as Walt Disney World announced that the highly anticipated TRON Lightcycle / Run roller coaster will be opening in Tomorrowland on April 3, 2023, this is certainly one part of Magic Kingdom Park you won’t want to miss.

But, which Tomorrowland attractions should you add to your travel to-do list? And where should you eat during your Tomorrowland tour? Fire up your rocketship as we blast off on a whirlwind tour of Walt Disney World’s Tomorrowland.

Due to COVID-19, ongoing construction and temporary refurbishments, some Tomorrowland offerings may be currently unavailable. For the most up-to-date list of open attractions, restaurants and shops, check out the My Disney Experience app. 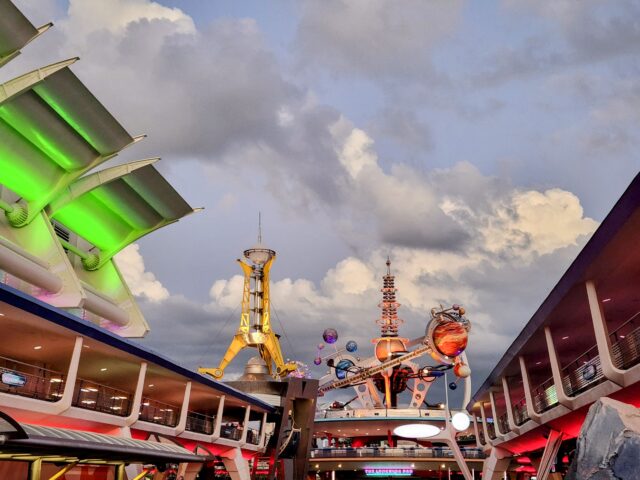 Tomorrowland, a Future Where Anything Is Possible

When it comes to different parts of Magic Kingdom, there is no themed land that symbolizes Walt Disney quite like Tomorrowland. You can even find a version of the land at every Disneyland-style park around the world (at Disneyland Paris, it’s known as Discoveryland instead).

As a passionate futurist who was always looking toward new frontiers, Walt Disney dreamed of what the world could be. Tomorrowland is those dreams made real. As Disney once said, “Tomorrowland attractions have been designed to give you an opportunity to participate in adventures that are a living blueprint of our future.”

Today, intergalactic tourists can explore a new Tomorrowland, a world that feels retro yet modern with just the right amount of kitschiness. Sure, we’ll admit that going to a monstrous comedy club sometime in the future seems a bit unrealistic, but if you ask us, that’s part of Tomorrowland’s charm. 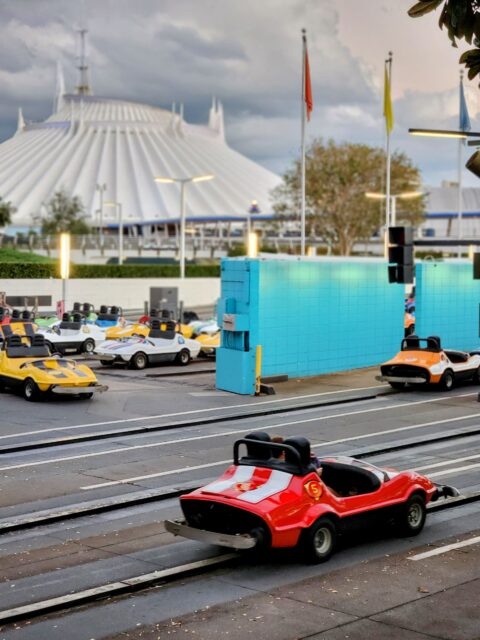 Where to Play, Eat and Shop in Magic Kingdom’s Tomorrowland

While most people can’t just hop in a spaceship for an out-of-this-world voyage across the galaxy (unless you’re an astronaut or Jeff Bezos, that is), Tomorrowland gives guests a taste of life among the stars, thanks to its assortment of fantastical attractions, whimsical character experiences, tasty dining options and space-age shops.

Here are all the rides, restaurants and stores you can enjoy at Tomorrowland in Magic Kingdom.

From nostalgic rides, like an opening-day attraction and one designed for the 1964 New York World’s Fair, to more modern favorites starring beloved Pixar characters and even an all-new attraction, there’s no shortage of things to do in Walt Disney World’s Tomorrowland. While you can no longer come face-to-face with an alien on Stitch’s Great Escape, there are still eight intergalactic attractions you can enjoy during your visit.

Jump in a rocket and take flight over Tomorrowland for a short tour through the solar system on Astro Orbiter. This high-flying ride offers a breathtaking view of Magic Kingdom and nearby Space Mountain. For an especially explosive sight, plan your trip through the stars for during the nightly fireworks show.

Team up with Buzz Lightyear in an epic battle against the evil Emperor Zurg, as well as your fellow rider, on Buzz Lightyear’s Space Ranger Spin. Like a drive-though video arcade, this hands-on, interactive attraction will have you sharpening your shooting skills, and is a ton of fun for little kids and adults alike. 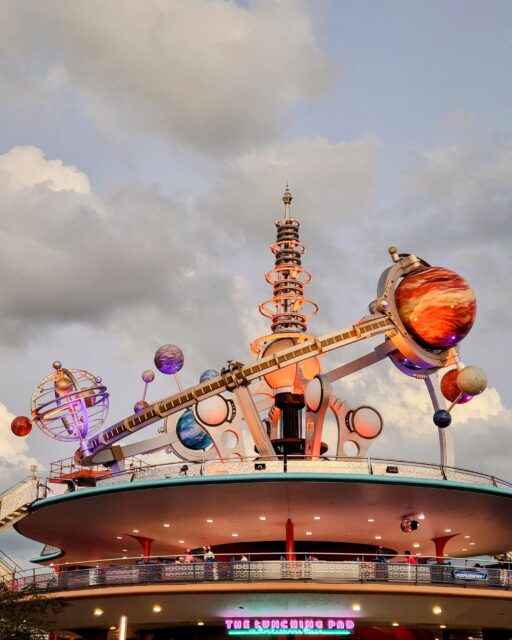 It’s laughter they’re after at Monsters Inc. Laugh Floor. With a hysterical cast of wisecracking monsters and plenty of audience participation, this silly comedy show is sure to leave you chuckling. For a chance at your own moment in the spotlight, text your favorite joke to the number provided. It might just be chosen to become part of the Laugh Floor show.

Climb aboard a space shuttle and get ready to blast off for a rip-roaring roller coaster ride through the galaxy on Space Mountain. Offering high-speed thrills through almost complete darkness, Space Mountain is one of the most popular attractions in all of Walt Disney World, let along Magic Kingdom. So, if you don’t decide to use Disney Genie+, be prepared for a long wait—consider this fair warning.

Hop in the driver’s seat of a gas-powered car for a miniature joyride past Space Mountain and the new TRON coaster on Tomorrowland Speedway. Originally known as Grand Prix Raceway, Tomorrowland Speedway is the only opening-day attraction in this futuristic land, making it one ride you definitely won’t want to miss.

Hoping to kick back and relax for a while? Check out the Tomorrowland Transit Authority PeopleMover. Imagined as mass transit for the future, this slow-moving, 10-minute-long attraction produces zero emissions and offers a bird’s-eye view of the entire land, including TRON, Astro Orbiter and Monsters Inc. Laugh Floor. The Tomorrowland Transit Authority PeopleMover even cruises through Space Mountain and Buzz Lightyear’s Space Ranger Spin. 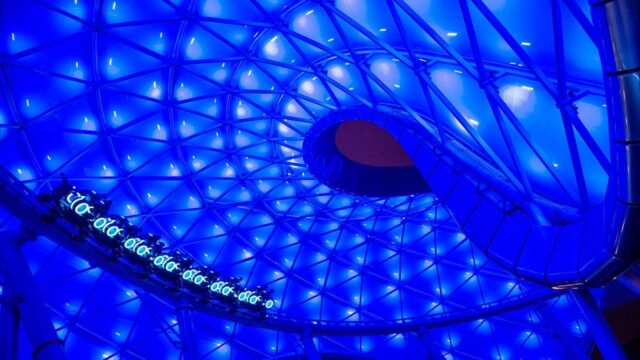 Get ready to hold on tight as you hurtle through the high-speed digital world of the Grid on TRON Lightcycle / Run. Set to be one of the fastest roller coasters at any of the Disney Parks, clocking in at a max speed of 59 miles per hour, this speedy transplant from Shanghai Disneyland is sure to draw huge crowds once it finally opens at the beginning of April 2023. So, be prepared for massively long lines. However, as someone who has ridden the original, we promise it’s worth it.

Best for: Kids, Teens and Adults

Looking to cool off for a bit (Central Florida can get hot, ya’ll) and soak up some Disney history while you’re at it? Then Walt Disney’s Carousel of Progress is for you. Created for the 1964 New York World’s Fair, Carousel of Progress is the brainchild of Walt Disney, signifying man’s achievements and wondrous ideas through the 20th century. Although the actors are audio-animatronics instead of regular people, this 21-minute show is still considered the longest-running stage show in the history of American theater. In other words, don’t miss it. 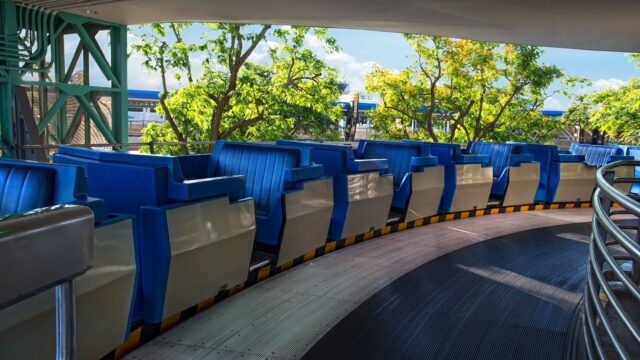 Rides aren’t the only places you can see your favorite Disney characters. You can even meet some of them, too—from afar, that is. While character meet-and-greets have basically returned to normal in other parts of Magic Kingdom and Walt Disney World overall, up-close character interactions aren’t currently available in Tomorrowland. Sorry, no hugs or autographs here!

On the bright side, you can still wave at a couple of out-of-this world characters, and snap a socially distanced selfie, over at the Rockettower Plaza Stage. Here you can say “hello” to interstellar pals like Buzz Lightyear and Stitch, who each stop by to greet their adoring fans (and, in Stitch’s case, make some mischief) several times each day. Character sightings typically begin shortly after the park opens and continues roughly once or twice every hour through the mid-afternoon. Check out the My Disney Experience app for current appearance times.

You’ll also want to blast past the Tomorrowland stage if you attend one of the Magic Kingdom holiday parties, like Mickey’s Not-So-Scary Halloween Party and Very Merry Christmas Party, as well as on New Year’s Eve. The futuristic plaza pavilion usually hosts a DJ dance party, with guest appearances by popular Disney characters, such as Mike and Sully from Monsters, Inc. 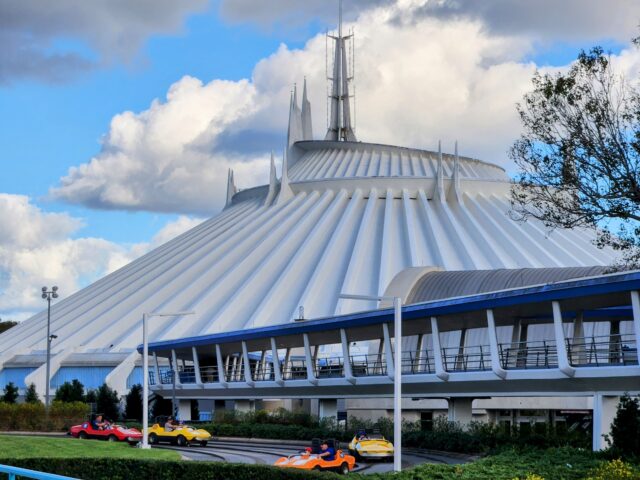 We don’t know about you, but hurtling through outer space and battling the evil Emperor Zurg makes us hungry. Fortunately, you’ll find a galaxy of dining options located throughout Tomorrowland, from convenient snack stands to a family-friendly quick-service restaurant to a sweet dessert party during the Magic Kingdom fireworks.

In the mood for something sweet? Be sure to stop by Auntie Gravity’s Galactic Goodies. Located across from Astro Orbiter, this counter-service spot dishes up all sorts of ice cream treats. Go for a classic float or shake or upgrade your dessert with an over-the-top sundae.

If you need a simple snack to power you through the rest of your tour of Tomorrowland, Cool Ship has you covered. Conveniently situated between Space Mountain, Tomorrowland Speedway and Astro Orbiter, this spaceship-shaped snack stand offers basic bites like popcorn, Mickey ice cream bars and sandwiches, and spiced nuts.

What to Get: Mickey Ice Cream Bar or Ice Cream Sandwich

If you’re searching for a fast and tasty lunch or dinner, consider Cosmic Ray’s Starlight Café. Cooking up everything from burgers to chicken sandwiches to salads, there’s something here for everyone. For an especially out-of-this-world meal, try to claim a table in the dining room area with Sonny Eclipse, a singing, astro-organ playing audio-animatronic alien. 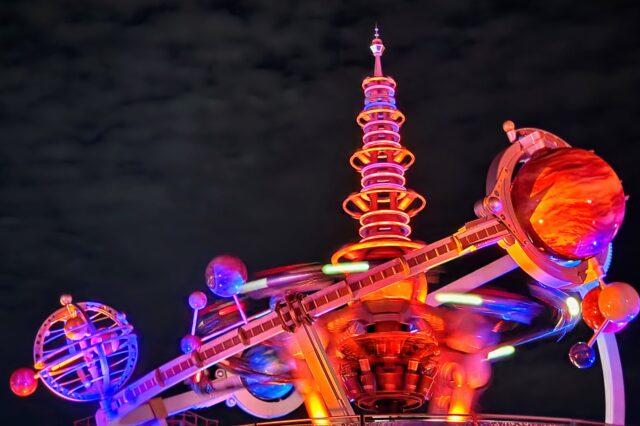 Fighting the theme park crowds can be downright exhausting. That’s where Joffrey’s in Tomorrowland comes in. No matter if the line is too long at Main Street Bakery (AKA Starbucks) or you’re in need of a jolt of caffeine after Carousel of Progress, this walk-up coffee bar near Space Mountain will do the trick.

What to Get: Coffee drinks

Whether you’re looking for a light lunch or something to satisfy your sweet tooth, The Lunching Pad has got it all. Serving hot dogs, soft pretzels, churros and more, this counter-service restaurant nestled beneath Astro Orbiter and the Tomorrowland Transit Authority PeopleMover makes for a convenient and satisfying stop.

What to Get: Walt’s Chili-Cheese All-Beef Hot Dog, If You Had Wings (Caribbean Jerk Chicken Strips), Churro

What to Get: A Buffet of Desserts and Cheeses (Beer and Wine is included for Guests Ages 18 and Up) 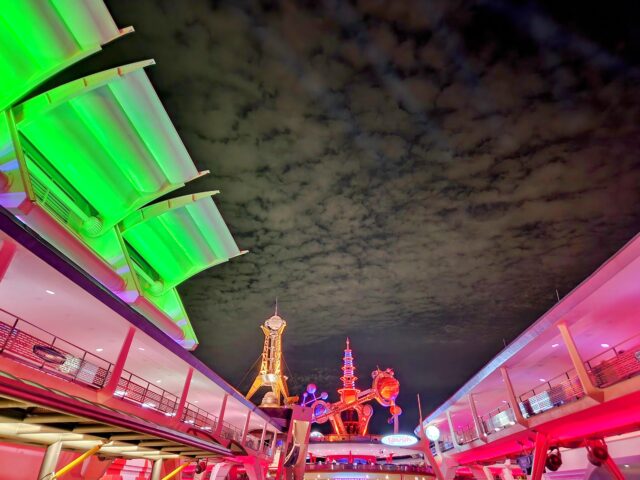 You don’t need to set out across the galaxy in search of the perfect memento for your trip to Walt Disney World’s Tomorrowland. There are all sorts of stores offering stellar souvenirs right here in this futuristic corner of Magic Kingdom, including Disney apparel, character plushies, Mickey Ears and more.

After battling alongside Buzz Lightyear, take some time to look around this spacey souvenir shop. Filled to the brim with Toy Story merchandise of all kinds, this is also where you can purchase your photo from the ride. While you’re there, pose for a picture with the Emperor Zurg, who is stuck behind bars.

Whether you’re on the hunt for Disney apparel, a plushie of your favorite character or other pixie-dusted mementos, you’re sure to find it at Star Traders. One of the biggest merchandise locations in Tomorrowland, there’s a souvenir here to suit everyone.

Hoping to buy that photo of you rocketing through Space Mountain? You’ll find it at Tomorrowland Light & Power Co. alongside other stellar swag, including covetable Star Wars wares. You can even create your very own lightsaber.

This little souvenir stand in front of Space Mountain may not tout the massive selection of other stores in Tomorrowland, but Ursa’s Major Minor Mart is stocked with all the essentials, including apparel, pins, plushies and more. 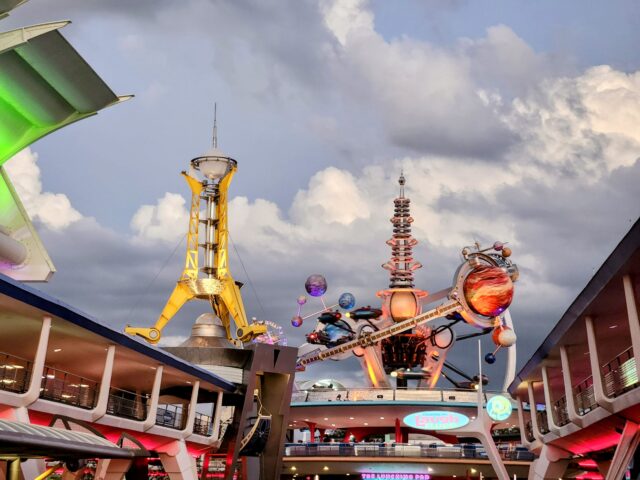 Well, folks, that concludes our intergalactic adventure of Magic Kingdom’s Tomorrowland. Have you been to Tomorrowland in Disney World? Which Tomorrowland rides are your favorites? Let us know in the comments! Then, learn how you can save on your future vacation with our discount Disney World tickets.