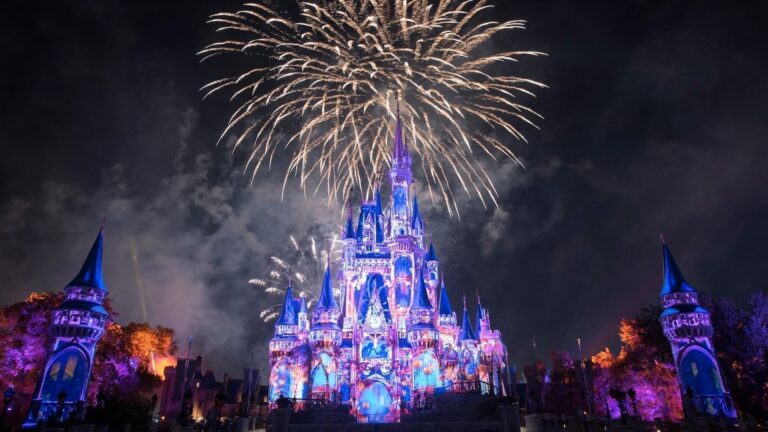 It’s one of the highlights of any Walt Disney World vacations. Being able to watch the Magic Kingdom Fireworks at the end of a fun day makes things so much more magical. A big part of that though is planning out the right place to watch them from and being able to secure that spot early enough before it’s taken.

I’ve spent a lot of time at Magic Kingdom and have viewed the firework shows dozens of times. Over the years the shows have changed to include more parts of the parks, particularly Main Street U.S.A. with projections. Before this started it was always about being right in front of the castle of the best viewing.

Now with better technology guests can see the Magic Kingdom Firework shows from several different areas and have a totally different experience. That being said, I’ve created a map below that you’ll want to view for the best spots to view the fireworks from. It’s more than just showing up in order to enjoy the show. Plan carefully using my tips and tricks and you’ll find your experience much better!

Best Places to view the Fireworks 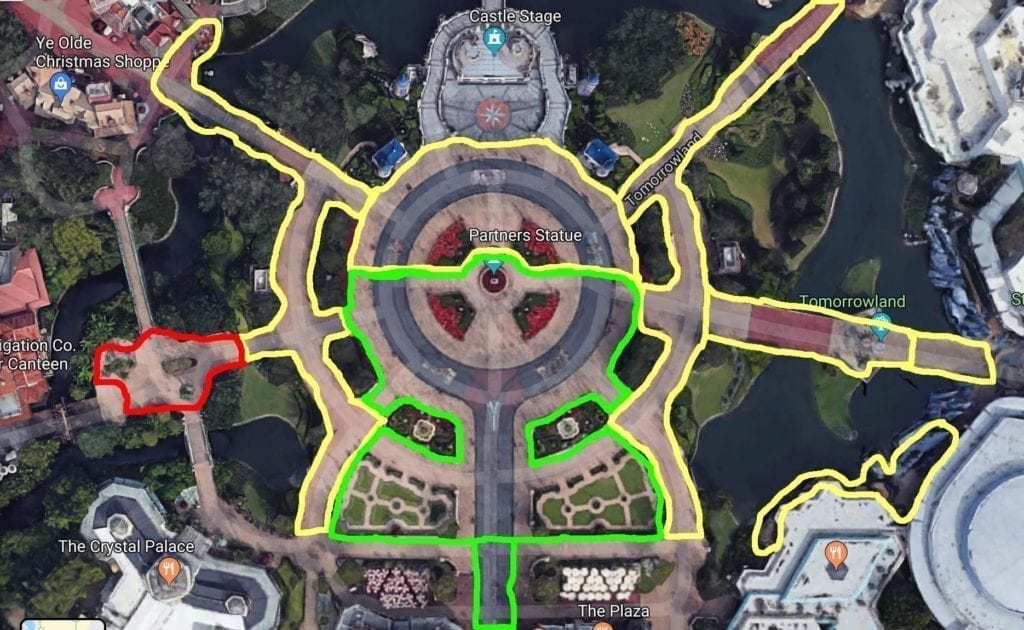 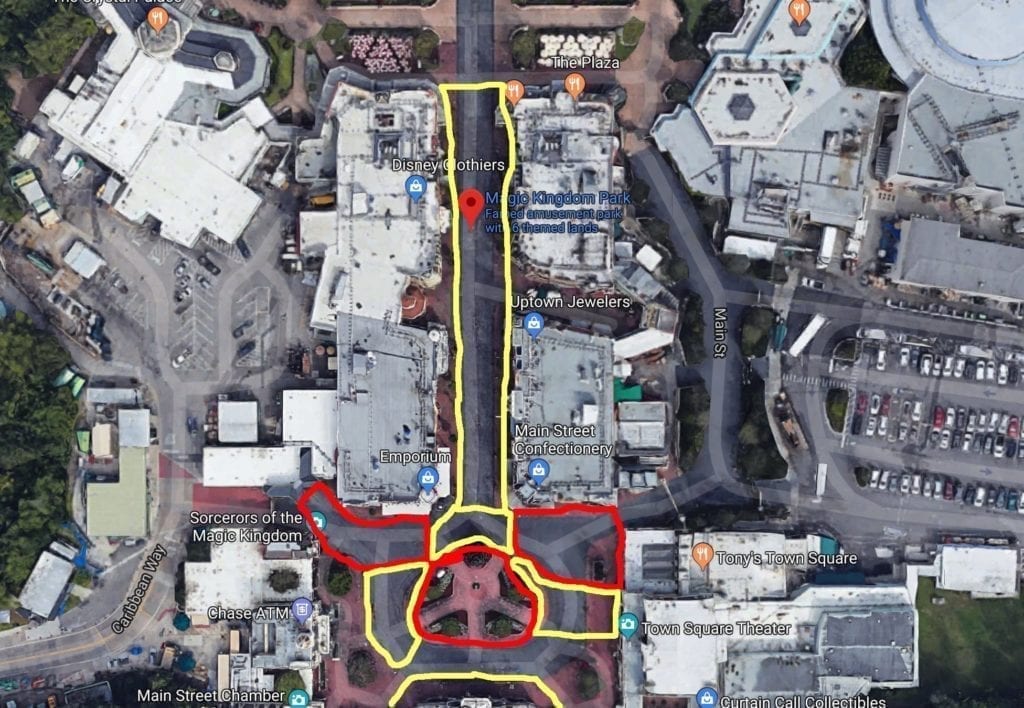 Planning Ahead and Things to Avoid

I can talk about these spots all day long but if you don’t plan ahead it doesn’t even matter. The last thing you want to do is show up 5 minutes before the Magic Kingdom Fireworks start and try and find a spot. It’s hard and you probably won’t have a good view or you’ll be told to keep moving.

First and foremost, show up early. I typically show up about 1 to 1 1/2 hours before the show starts if I really want a decent place to view (somewhere in the green areas). If I do less than 1 hour before the show I’m typically in a yellow area. 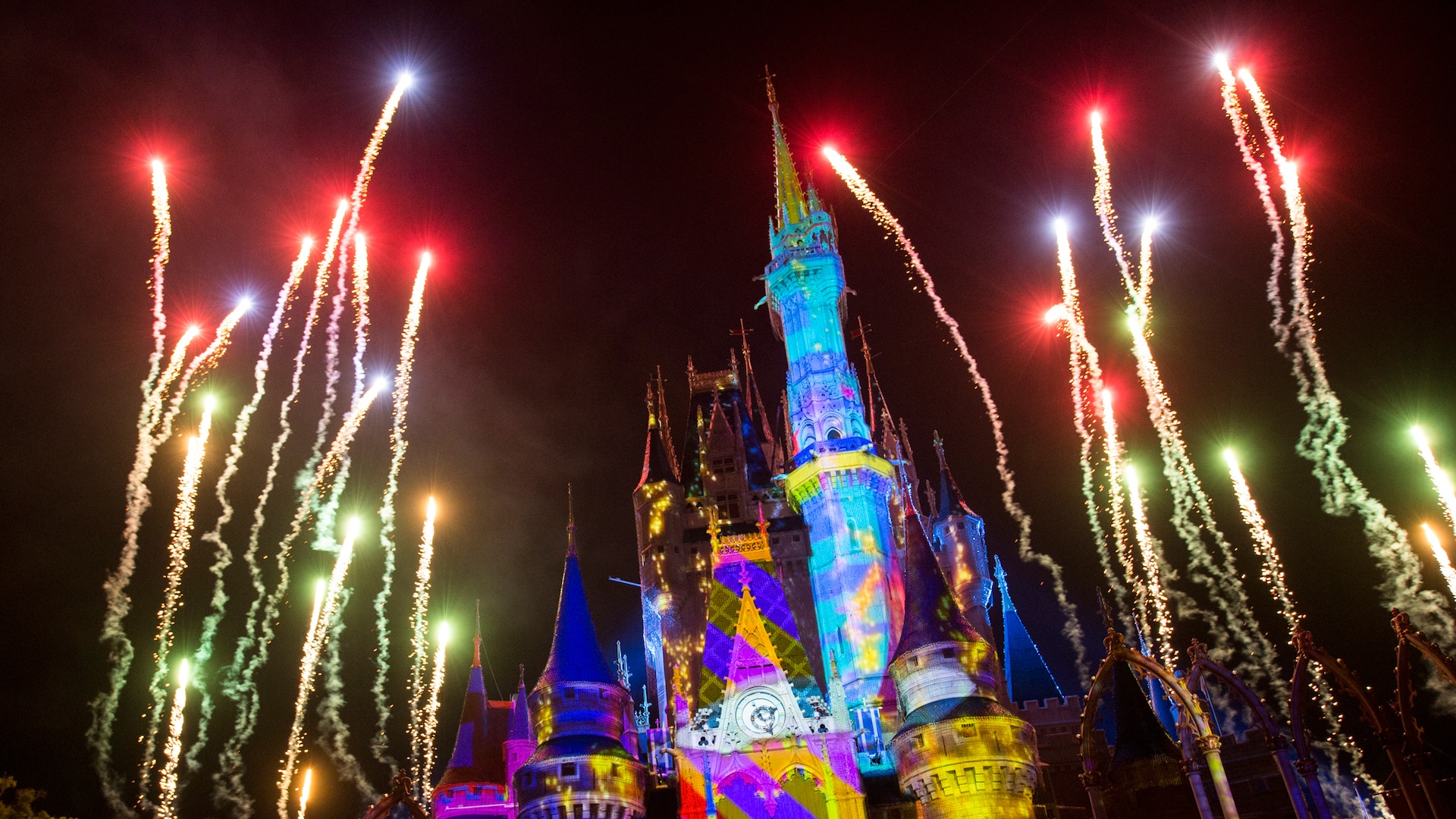 Some people show up 2 hours before the shows start and lay down a blanket and eat their dinner before to help kill time. If you’re into this I say go for it. I have a parade blanket that I recommend in my What To Pack Guide that’s perfect to use. And with Mobile order it can actually be a lot of fun. People might think you’re a bit crazy for showing up so early but when you have the best spot it doesn’t matter.

So once you find your spot and show up early then you’ll need to stay there. There have been plenty of times where I showed up early, nobody was there so I left to do something real quick and then when I came back my spot was gone and others were piling in. It happens quick and the crowds will build.

Of course when you choose your spot you’ll want to make sure that there are no trees in the way. A clear open view of the castle is best. Most yellow spots on the map above have some sort of obstruction in the way or prevents you from seeing everything. Once you get there look around and make sure you’re happy.

It’s hard to know when parents are going to put kids on their shoulders so they can see better. Usually this is poor planning on their part but it happens. Disney doesn’t like it (for safety reasons) and neither will you. I always try and pick a spot where this couldn’t happen. Typically at the front row of an an area where guests aren’t allowed any further up. 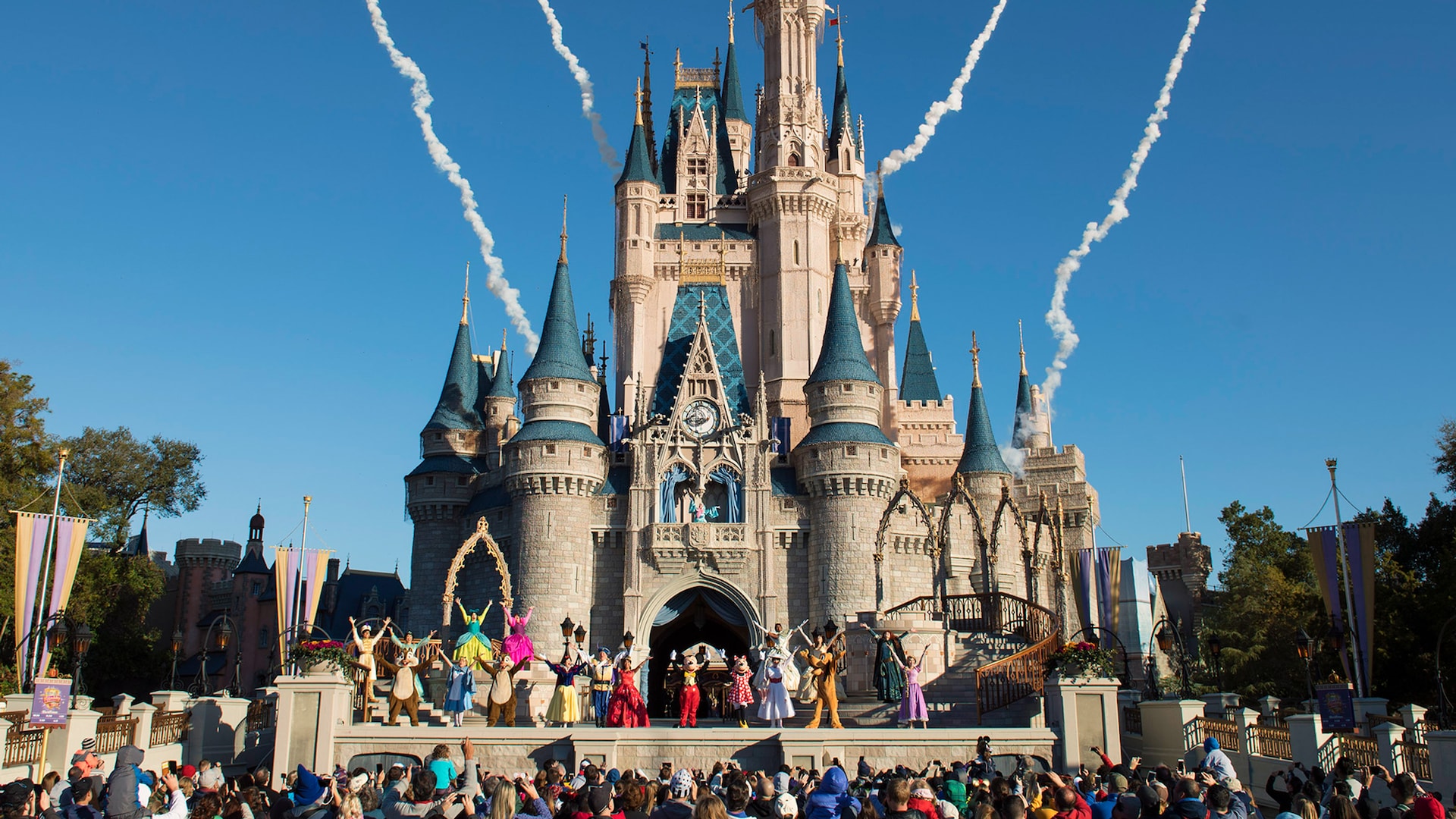 What can you do if a child gets put up in front of you? There’s a few things you can try but I recommend going about it in the nicest way possible. Be polite and let them know that others can’t see behind them. If that doesn’t work seek out a Cast Member and let them know. Some may or may not do anything about it.

If all else fails try and move your viewing angle the best you can. There’s no point in getting into an argument over a fireworks spot, especially with kids. It’s really unfortunate but it happens. Most people are understanding about it.

Along these lines, if you can’t find a place to view them because you showed up late, please don’t stop in the middle of a walking path. Cast Members are already asking you to keep walking so don’t stop. It really is a safety hazard not to mention you could be blocking the view of someone. Do your best to find a spot and if you don’t, head back towards Town Square to watch the Magic Kingdom Fireworks.

Lastly, when the firework show ends, a lot of people exit the park and head home. If this is you I would plan on longer bus lines and some decent crowds to push through Main Street and the exit. If you can, stay in the park for another hour or some and let that die down before heading out. If not, try walking over to Disney’s Contemporary Resort and grabbing an Uber or LYFT. It could save you a lot of time especially if you’re staying at an All-Star Resort.

There are 2 main Firework shows going on at Magic Kingdom. First is Happily Ever After which is played basically every night except when it’s cancelled due to bad weather or there’s a Mickey’s Very Merry Christmas Party going on.

Happily Ever After includes some of your favorite Disney films, capturing them through music, projections and of course fireworks. The show is about 18 minutes long and is age appropriate for all. Very little ones may want to have some sort of ear protection from the noise. 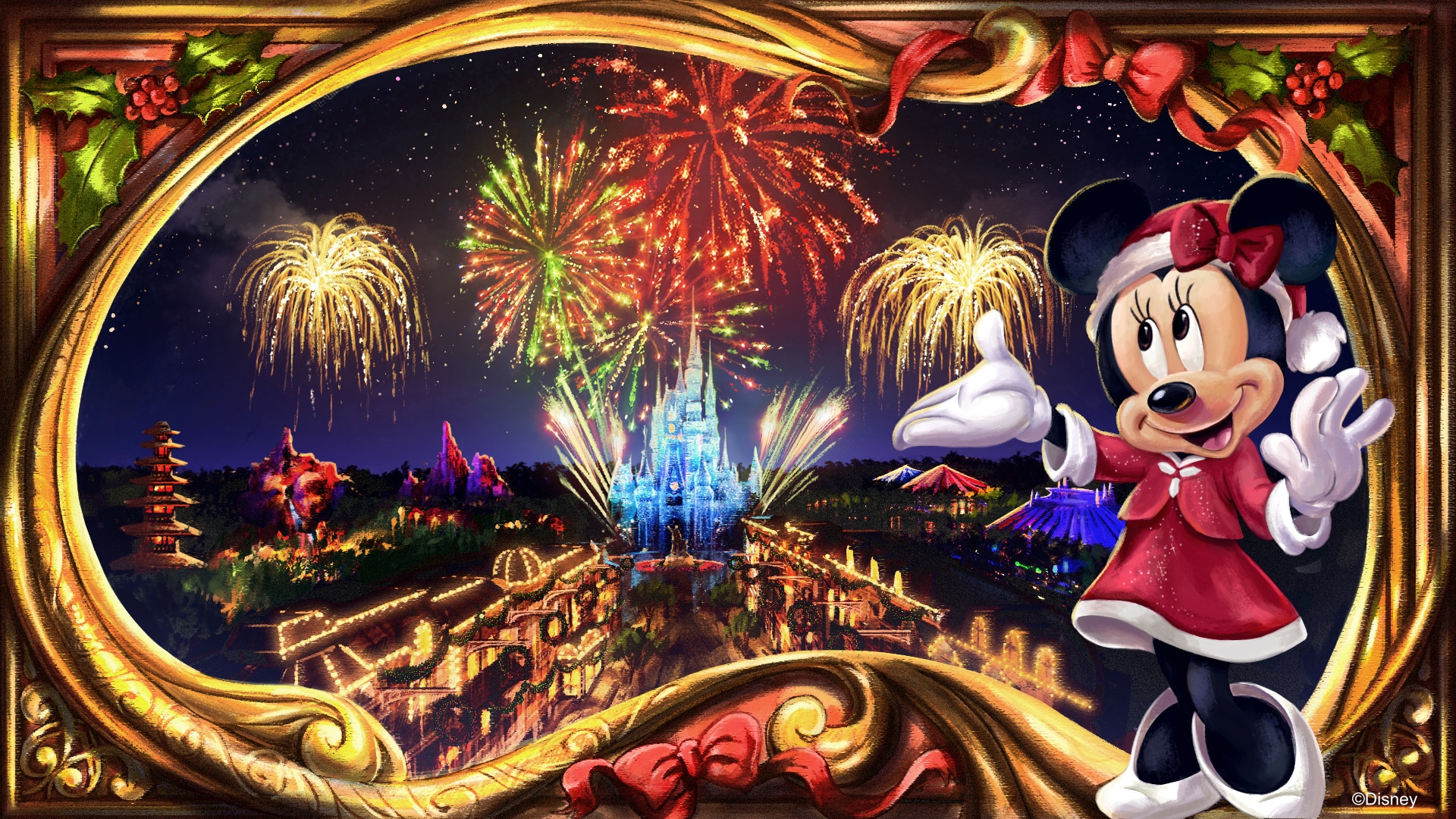 Also playing is Minnie’s Wonderful Christmastime Fireworks. This fireworks show is only played during the Mickey’s Very Merry Christmas Party and features some of the most classic holiday songs including Deck the Halls and We Wish You a Merry Christmas. A separate part ticket is required to participate. The show plays through Dec. 22nd, 2019.

There is a smaller projection show that takes place at 9:45pm called Once Upon A Time and involves lights, music, projections and small local fireworks that you can also view. It’s actually a pretty cool show and typically draws less crowds.

Be sure to check a times guide on your mobile app or with a Cast Member to make sure a show is playing. Cancellations typically happen with bad weather like rain and high wind.

Get to your spot early, about 1 hour to 1 and a half hours. Don’t leave. Grab a front row where nobody can stand in front of you. Don’t put kids on your shoulders as a courtesy to others. Plan on some crowds once the show is over and longer wait times for busses. Most of all have tons of fun because the Magic Kingdom Fireworks are the best and make a magical ending to a fantastic day!

As to images © Disney