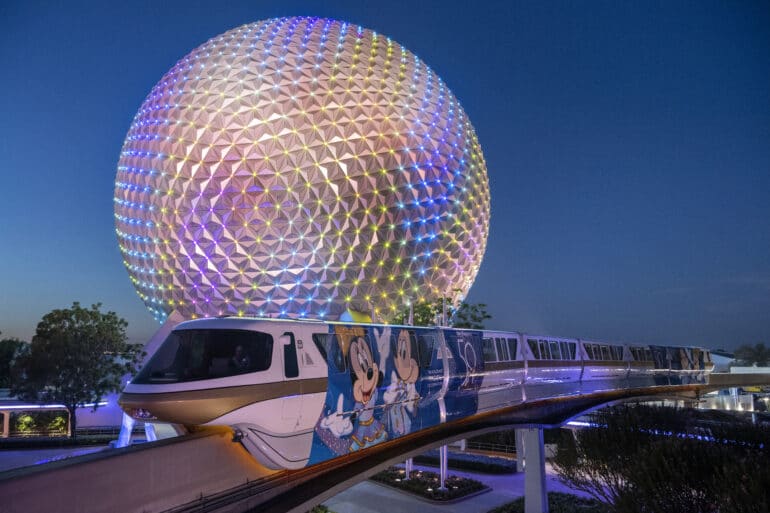 For more than 50 years, the Disney Monorail has been whisking guests around The Most Magical Place on Earth. In fact, for many, it’s actually the very first thing you ride at Walt Disney World.

Both convenient and complimentary, the monorail makes for an easy way to get around, but it can also be a little confusing if you don’t know what to expect. No worries! We’re here to demystify Disney World Monorail with this comprehensive guide.

The monorail has been transporting guests around The Most Magical Place on Earth since Walt Disney World’s opening day on October 1, 1971. For many, that first ride can be an emotional experience, whether seeing Cinderella Castle as you zoom around Seven Seas Lagoon or cruising past Spaceship Earth and over World Celebration. In short, it’s an experience that absolutely shouldn’t be missed.

How much does the monorail cost at Disney World? 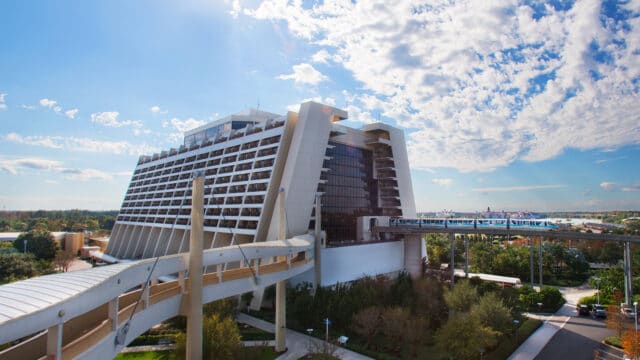 Nothing! Taking the monorail around Walt Disney World is completely free. Like the resort’s other transportation options – including the Disney Skyliner, water taxis and bus service – you don’t need a park ticket, Park Hopper, or to even enter the park to ride the monorail, making it one of the few attractions at Disney World that won’t cost you a penny.

(Yup, we said it. The monorail has a safety announcement. People get excited to ride it – so much so that they might do it just because. It’s basically a juiced-up functional version of the Tomorrowland Transit Authority PeopleMover.)

This is because each theme park monorail station is located just outside the park’s main entrance. In other words, you won’t need to enter Epcot or the Magic Kingdom in order to get on.

Where does the Disney World Monorail go? 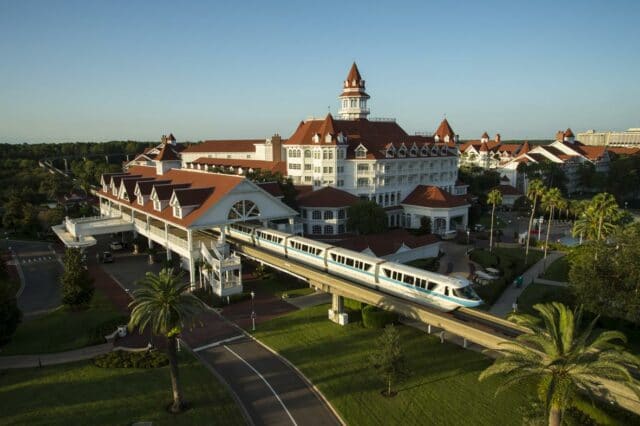 Hoping to take this highway in the sky to Disney’s Hollywood Studios or the Animal Kingdom Theme Park? You’re in for some disappointment. Unfortunately, the Disney Monorail doesn’t run between all of the Walt Disney World theme parks, only Magic Kingdom and Epcot, nor does it go to Disney Springs. (Although we really wish it did!)

Can anyone ride the Disney Monorail?

Yup! While most people on the monorail at Disney World are heading to the parks, a dining reservation or back to their resort, no dining or hotel reservation or theme park ticket is required to ride. The same goes for the Magic Kingdom Resort Monorail – even if you aren’t staying at the Contemporary, Polynesian or Grand Floridian, you’re still able to ride.

What is it like riding the Disney World Monorail? 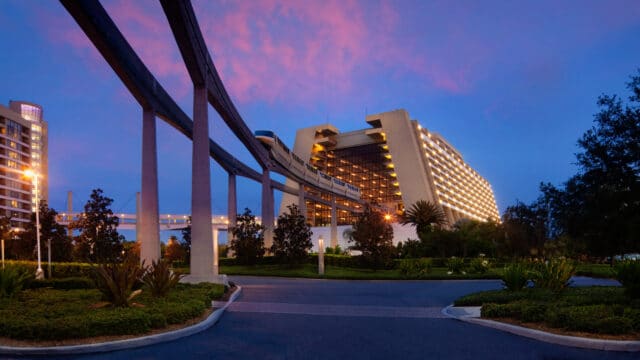 Taking the monorail is a classic Disney World experience. These train-like transports glide through the air on a singular rail, making for a unique bird’s-eye view of the area and an undeniably fun way to get around.

From there, all that’s left to do is wait for your turn. Once you’ve reached the front of the line, a cast member will direct you to your boarding area. Then, just hold tight until the doors slide open so you can walk (or roll) in.

Inside the monorail, you can choose to either sit on the hard plastic bench seats or stand. However, if you decide to stay vertical, be sure to hold on tight in the event of any sudden stops.

Is the monorail faster than taking the Magic Kingdom ferry?

When heading to the Magic Kingdom from the TTC, the monorail will almost always be faster than the ferry, especially if you take the Express Monorail. This is because monorails tend to run more frequently. Even with stops at the Polynesian and Grand Floridian, the Magic Kingdom Resort Monorail usually comes out on top. The only exception is when there are technical difficulties.

Can you still ride in the front of the Disney Monorail? 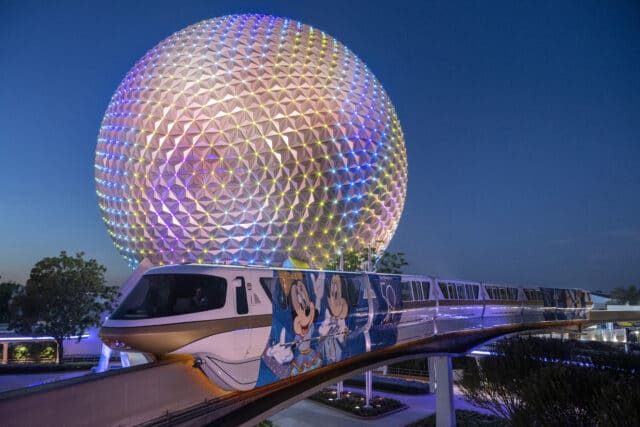 Disney World’s monorails used to have a long-running tradition of allowing select guests up into the cockpit. Sadly, due to a tragic accident that resulted in the death of a monorail pilot back in June 2009, riding in front with the Disney monorail pilot is no longer allowed.

Can you ride the monorail without getting off?

Yes! While you may be tempted to follow the clarion call for a delicious DOLE Whip and join the crowds as they exit the monorail towards Magic Kingdom, you don’t have to get off at any specific stop at Walt Disney World. In fact, if you only wanted to ride around and enjoy the scenery – that view of Cinderella Castle is pretty magical – you’re completely welcome to do that.

This leads us to our next question.

Can you ride the monorail for fun at Walt Disney World?

Most definitely! In fact, we encourage it. Not only is this Disney transportation offering complimentary, but it’s also a downright enjoyable way to see some sights, thanks to its bird’s-eye view. Personally, we love using the Magic Kingdom Monorail to do some resort hopping around the on-route hotels. Not only do you get a taste of Disney magic without having to battle the theme park crowds, but it won’t cost you anything. That’s a rarity at Disney World, so we say take advantage.

Is taking the Disney Monorail worth it?

Absolutely! In fact, for guests going to the Magic Kingdom (so, basically everybody), the monorail will be your primary option for actually getting to the park from the Transportation & Ticket Center. The only exceptions are those who opt to take the ferry across Seven Seas Lagoon or folks staying at hotels like Disney’s Contemporary Resort or the Grand Floridian Resort & Spa who would rather walk.

While the long line to get on may be daunting, especially in the mornings around park opening or closing time, and you may think that the boat will be quicker, the monorail is still your best bet. Since monorails tend to run frequently, you shouldn’t have to wait for long. Plus, once you’re on, it’s a considerably quicker trip. On top of that, it’s a Disney World institution and a quintessential experience that really shouldn’t be missed.

The only folks who might want to opt out of taking the monorail are hotel guests of the Grand Floridian (possibly) or Contemporary (definitely) on their way to the Magic Kingdom. For those staying at the Grand Floridian, walking to the park will only take you around 16 minutes, which is comparable to the amount of time you’d spend waiting for the monorail and then riding to the entrance. The Contemporary, meanwhile, is only an 11-minute walk from the Magic Kingdom, significantly faster than the 30 minutes or so it would take on the monorail.

Ready to ride this “public transport of the future?” Here are some things you should keep in mind when planning your trip:

As we mentioned earlier, the Disney World Monorail only serves two parts of the resort: Magic Kingdom, including three hotels, and Epcot. Guests can use three different routes, with the Transportation & Ticket Center (TTC) as the hub:

Disney World has three deluxe resorts located along the Magic Kingdom Monorail route, with each hotel having its own station. Talk about convenience! They include:

Of course, when it comes to monorail Disney hotels, the most notable is the Contemporary Resort. Not only does this iconic A-frame boast its own monorail station, but Disney’s highway in the sky actually runs directly through the atrium.

So, how long will it take you to get from Point A to Point B on the Disney Monorail? It depends on where you are and where you’re going. Here’s how much time you can typically expect to spend riding once you’re on the monorail:

As you can see, there is no monorail that runs directly between Magic Kingdom and Epcot – you must transfer at the Transportation & Ticket Center. Remember that these estimates don’t reflect your time spent waiting in line for the next monorail to arrive. If you’re traveling between your hotel or the Magic Kingdom and Epcot, keep in mind that you’ll also need to plan extra time to transfer monorails at the TTC.

Operating hours for the monorail fluctuate according to theme park hours, with the service beginning at least 30 minutes before Early Park Entry is set to begin and the last monorail running up until one hour after the park closes, including for Extended Evening Hours when applicable.

The Magic Kingdom Resort Monorail tends to have slightly longer hours, starting around 6:30/7 AM, to accommodate guests heading to breakfast reservations. The hours can vary due to scheduled maintenance. So, be sure to check the signage out front or talk to a cast member for the most up-to-date information.

Finally, please note that Disney Monorail wait times will depend on a variety of factors, such as when you are riding, where you are going and what time of year you’re visiting. During the busier periods, especially in the morning when the parks open or at night at closing time, expect the lines to be long but fast-moving, as monorails will be running more frequently. However, in general, the monorail tends to run every four to seven minutes on average.

Riding the Monorail at Disney World for Fun

As we said earlier, the Disney World Monorail can still be fun to ride, even if you aren’t going to the theme parks. It’s a great way to soak up some (free!) pixie dust and scope out Cinderella Castle or Spaceship Earth, all without setting foot in a theme park. This makes it the perfect idea for Disney World guests with a late arrival who are still looking for a dash of magic to get the vacation started or Orlando locals on a Disney date night.

Hoping for something more than just a good view? Resort hopping can be a delightfully different way to enjoy another side of Disney World without having to pay a ton of money or deal with heavy crowds, and along with the Disney Skyliner, there’s no better way to do that than the Magic Kingdom Resort Monorail.

Consider embarking on an unofficial Disney food tour or a Magic Kingdom Resort Area bar crawl. Or, plan your Monorail trip for the evening and watch the Magic Kingdom fireworks from outside the park – the Contemporary Resort or the beach at Disney’s Polynesian Village are our favorite spots.

Items Allowed on the Disney Monorail

Ready to go? First, find out what you can and can’t bring with you.

Can you take food on the Disney World Monorail?

Yup! Whether it’s your morning cup of coffee or bucket of souvenir popcorn, you are welcome to bring most food and beverage items on the Disney Monorail. However, there are a few exceptions. Glass containers aren’t allowed, nor are alcoholic beverages. Plus, all drinks must be safely covered with a lid.

Are strollers allowed on the monorail at Disney World?

Yes! Guests with children will be happy to know that strollers are allowed on the monorail, permitted they fit within Disney’s requirements. Best of all, since the opening is quite wide, you won’t even need to unload your kiddo and fold up their chariot to get on – just roll on in.

Can you take a wheelchair or scooter on the Disney Monorail?

Of course! The Disney Monorail is easily accessible for guests with mobility needs, so you don’t need to worry about riding with a wheelchair or ECV. Not only is there plenty of room, but a ramp is also provided for easy entry and exit.

Have you ridden high in the sky on the Disney Monorail? What’s your favorite way to get around Walt Disney World? Let us know in the comments! Taking Disney transportation is fast, convenient and, best of all, free. For even more savings, check out our Disney World discount tickets. 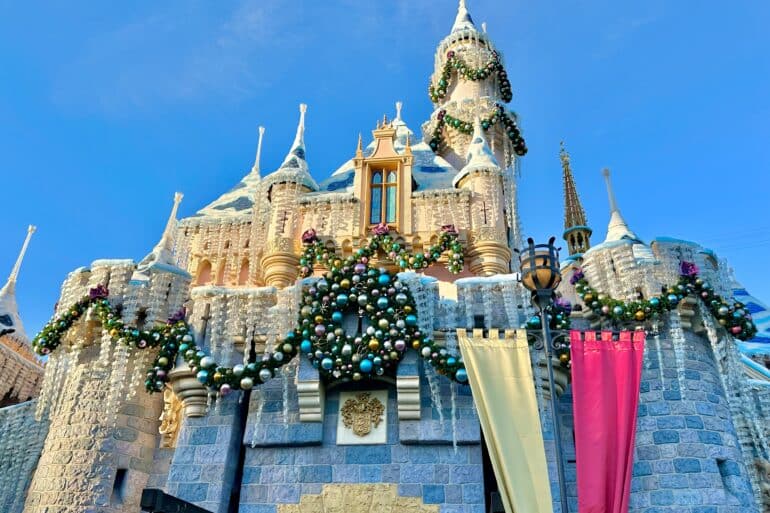