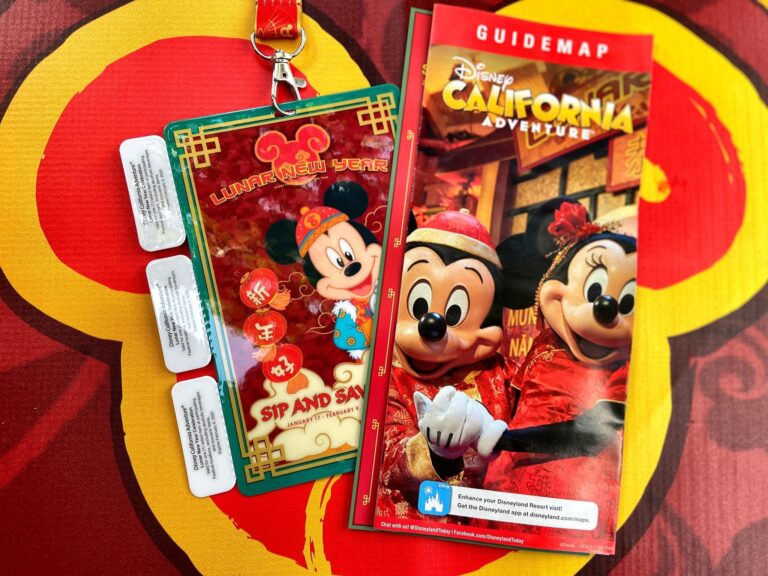 While Disney Lunar New Year celebrations in California Adventure Park were on hiatus in 2021 due to Covid-19, all the pageantry is back for 2022 – just in time for the Year of the Tiger. This year, Lunar New Year Disneyland festivities are scheduled for January 21 to February 13, 2022.

If you’re hoping for an auspicious start to your 2022 and are heading to Disneyland over the next few weeks, read on for everything you can enjoy for the Year of the Tiger and Lunar New Year at California Adventure.

For those planning a Disney Chinese New Year 2022 trip, you might be wondering what Disneyland and California Adventure are like during the Covid-19 pandemic. Well, way better than last year since, unlike 2021, Lunar New Year Disneyland festivities have come roaring back – just in time for the Year of the Tiger.

Although festival favorites like Asian-inspired eats at Lunar New Year Marketplaces and Disney characters in celebratory attire have returned, you can still expect some changes around the Disneyland Resort due to Covid-19. You don’t need to be vaccinated to go to Disney, though it is strongly recommended. However, there are the following requirements and modifications: 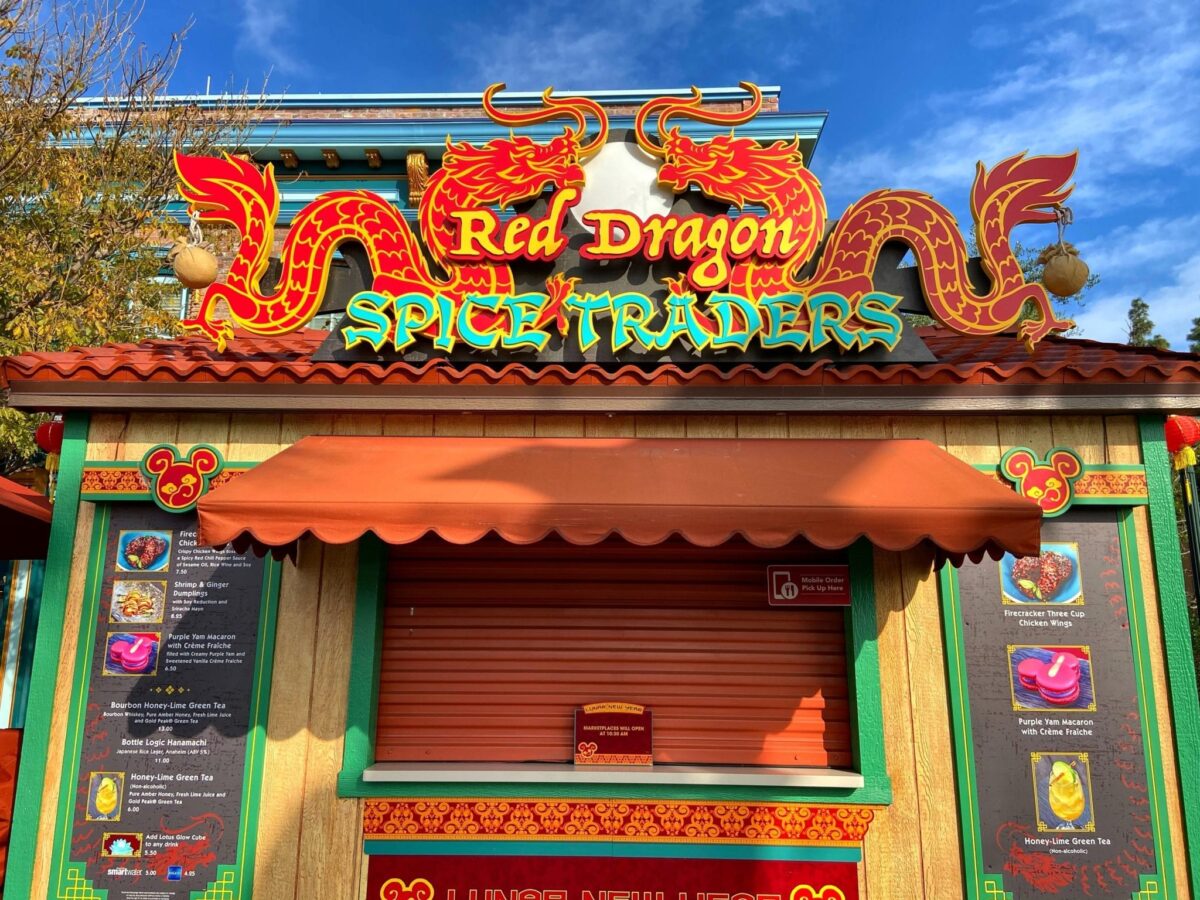 Although Lunar New Year (or Spring Festival, as it’s known in China) may also be widely known throughout the western world as Chinese New Year, this joyous festival is actually celebrated in several Asian cultures, including Vietnam, Korea, Singapore, Indonesia, The Philippines and more. So, it’s no surprise that California Adventure Park at Disneyland Resort hosts one of the best Lunar New Year celebrations in the Golden State.

Disney’s Lunar New Year festivities bring the culture and excitement of a traditional Chinese New Year temple fair to the streets of California Adventure, blending cultural displays and culinary traditions with much-loved Disney characters. Paradise Garden Park comes to life with the spirit of the holiday, as it’s bedecked with lanterns, banners, and all things red and gold.

With lots to see and do, don’t be surprised if you end up spending a good chunk of the day enjoying it all. Best of all, you get to experience all of it (plus the costs of whatever you want to eat, drink and buy) with your theme park ticket, including:

How long is Lunar New Year at Disneyland?

Traditionally, Spring Festival in China is a weeks-long affair, starting with spring cleaning in the days leading up to the holiday and concluding with the luminescent Lantern Festival around three weeks later. The dates vary depending on the year, with the start of the festivities typically falling between January 21 and February 20, according to the Gregorian calendar we’re used to.

Does Disney World do anything for Chinese New Year?

Hoping to kick off the Year of the Tiger alongside Tigger and the other Disney cats? Don’t book your Disney World tickets just yet. Unfortunately, even with the China Pavilion in Epcot’s World Showcase and Asia in Animal Kingdom Theme Park, Walt Disney World doesn’t offer any special events for Lunar New Year.

So, for those wanting to start 2022 with plenty of good fortune and fun, you’ll need to travel to Disneyland in California, Shanghai Disneyland and Hong Kong Disneyland instead. 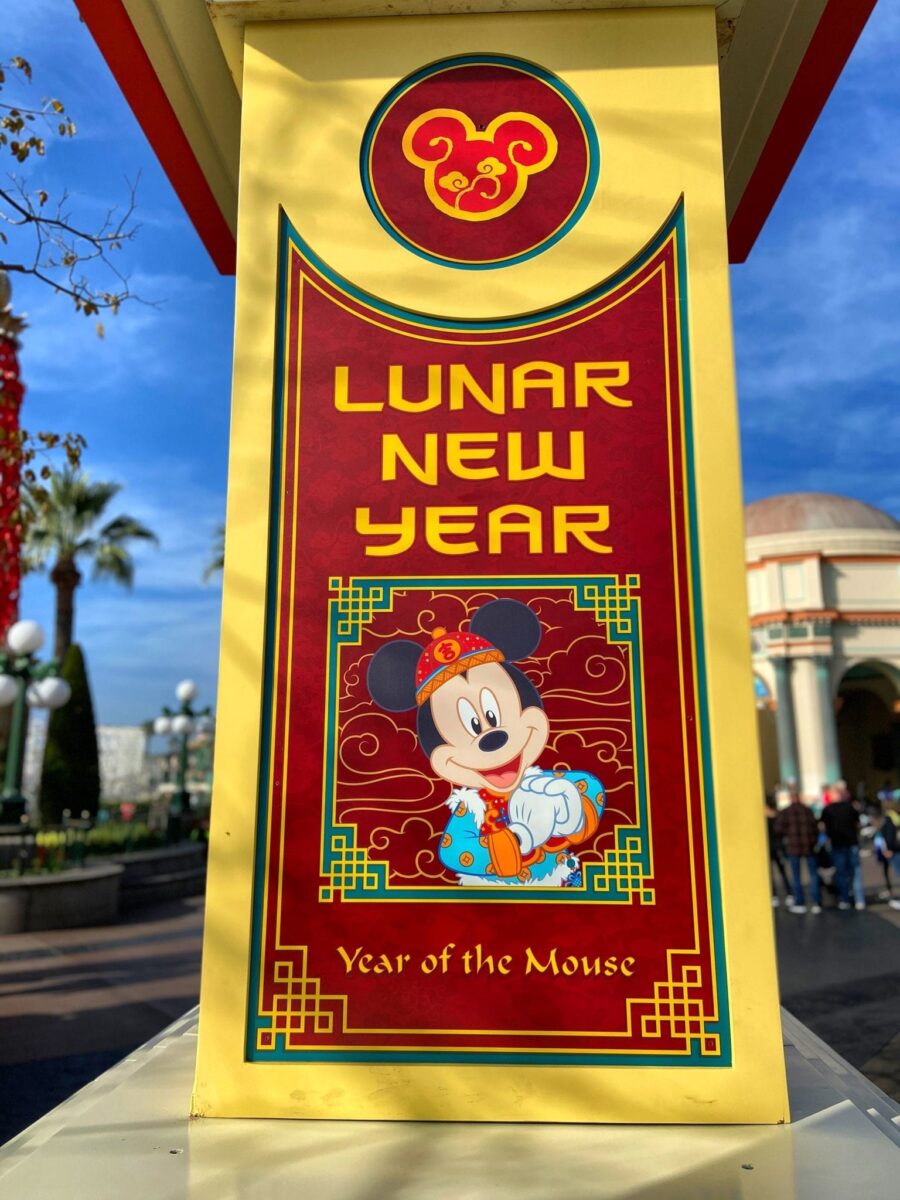 Just like Lunar New Year festivities in Asia, food is one of the high points of Disney’s Chinese New Year. Disneyland’s ode to this festival of good fortune dishes up delightful bites inspired by Chinese, Korean and Vietnamese culinary traditions at Lunar New Year Marketplaces in California Adventure.

As with years past, marketplaces will be dotted around Paradise Gardens Park near Ariel’s Undersea Adventure and the Golden Zephyr. You can also enjoy a smattering of Asian-inspired fare at nearby Paradise Garden Grill. This year, Lunar New Year Marketplaces include:

So, what can you expect to eat for Lunar New Year Disney-style? Why, symbolic dishes meant to bring you luck, good health and prosperity in the coming year, of course!

Each year, families tuck into meals overflowing with both meaning and flavor. A whole fish signifies abundance, while dumplings and spring rolls – portable bites shaped like silver ingots and gold bars – represent wealth. Red-hued meats like Beijing roast duck or char siu pork are lucky, too, as are plump oranges and tangerines. 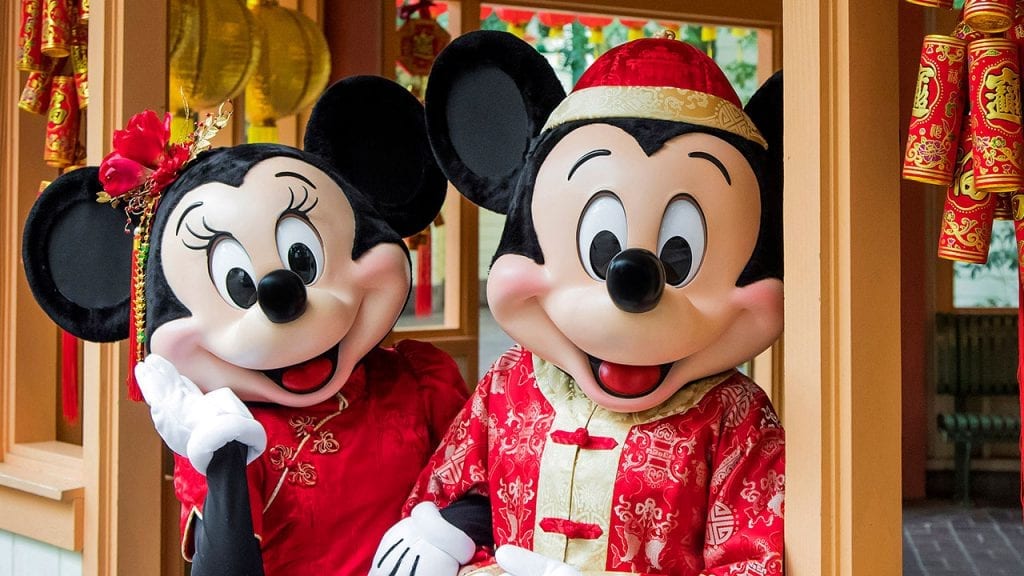 Finally, Chinese New Year wouldn’t be complete without longevity noodles – the longer the noodle, the longer the life. Now, while may not dish up a whole fish for your enjoyment (or maybe they will like in 2020!), bowls of tasty noodles seem like a reasonable guess for the Longevity Noodle Co. Lunar New Year Marketplace. Stay tuned for the menus and our foodie guide!

If you’re planning to sample several items, the Sip and Savor Pass can be a great deal. In fact, you might even be able to save a bit, especially if you opt to redeem your tickets for pricier drinks or dishes. Each Sip and Savor Pass comes with entitlements that can be exchanged for either a food item or non-alcoholic beverage (if you’re looking for alcohol at Disneyland, go here instead).

And don’t sweat it if you’re too stuffed to stomach one more spring roll. Sip & Savor Passes are valid through February 13 and the end of the Disneyland Chinese New Year 2022. Best of all, annual passholders – now, Magic Key Holders – typically get a discount. 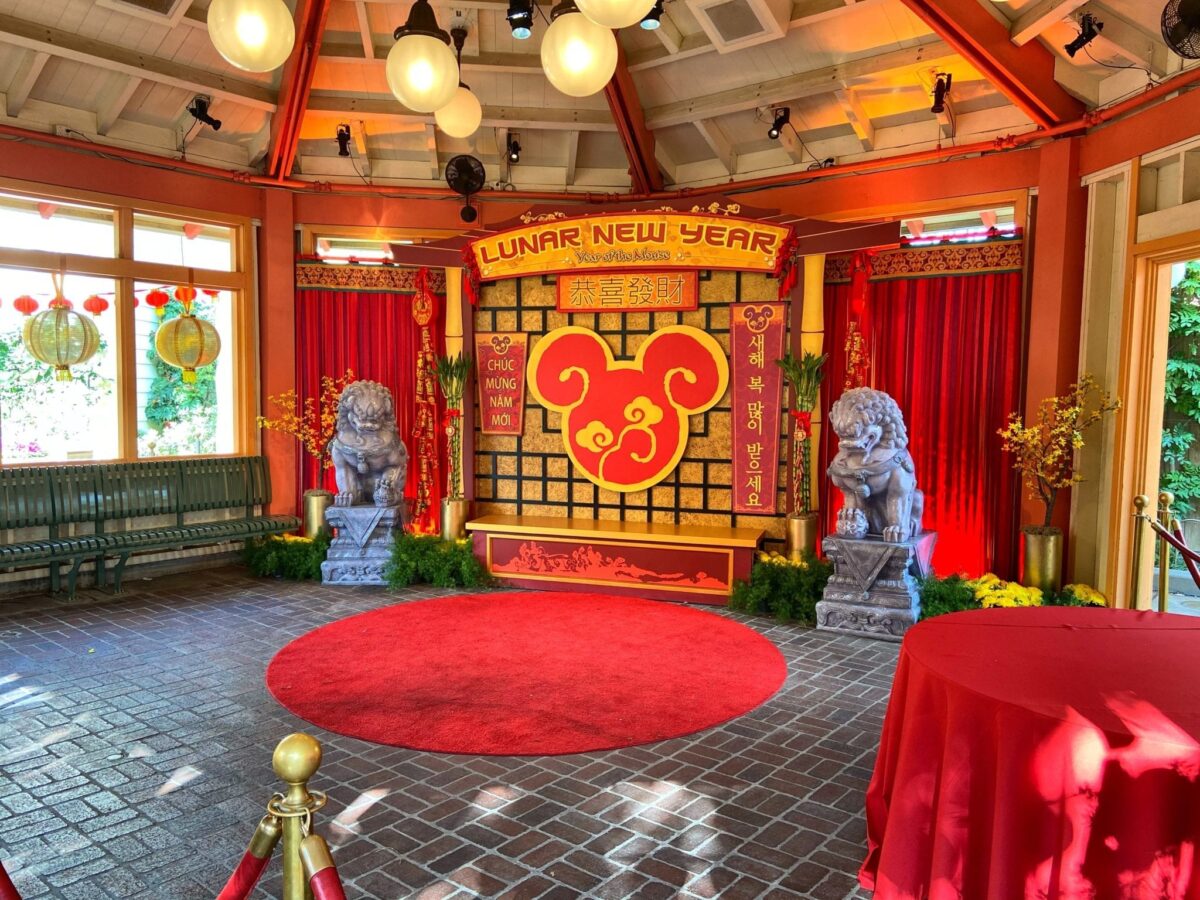 Folks in Beijing and Shanghai will welcome the Year of the Tiger at Spring Festival temple fairs, lively affairs with folk music, acrobats, shadow-puppet shows, lion & dragon dances and more. At Disneyland, meanwhile, guests at California Adventure Park will have a roaring good time enjoying Disney’s take on Lunar New Year entertainment – with plenty of Disney characters, of course.

What better ambassadors for Chinese New Year than Mulan and Mushu? Mulan’s Lunar New Year Procession fills California Adventure with the spirit of Spring Festival and the Year of the Tiger. Held multiple times during the day, this vibrant spectacle effortlessly fuses elements of Asian culture with well-loved Disney characters.

An explosion of music, intricate costumes and traditional dances, the procession is arguably the best part of the festival. Asian performing troupes take to the street, thrilling guests with cultural displays like impressive dragon dances, playful lion dances and delicate fan dances. And don’t forget Mulan and Mushu as the official grand marshals, along with bouncy Tigger in honor of the Year of the Tiger.

If you’re hanging out around Paradise Garden Park when this colorful kaleidoscope of culture and fun floats past, take some time out to watch. The performers are impressive, the costumes are breathtaking – it’s all just a ton of fun and wouldn’t feel out of place in the China Pavilion in Epcot (hint, hint). 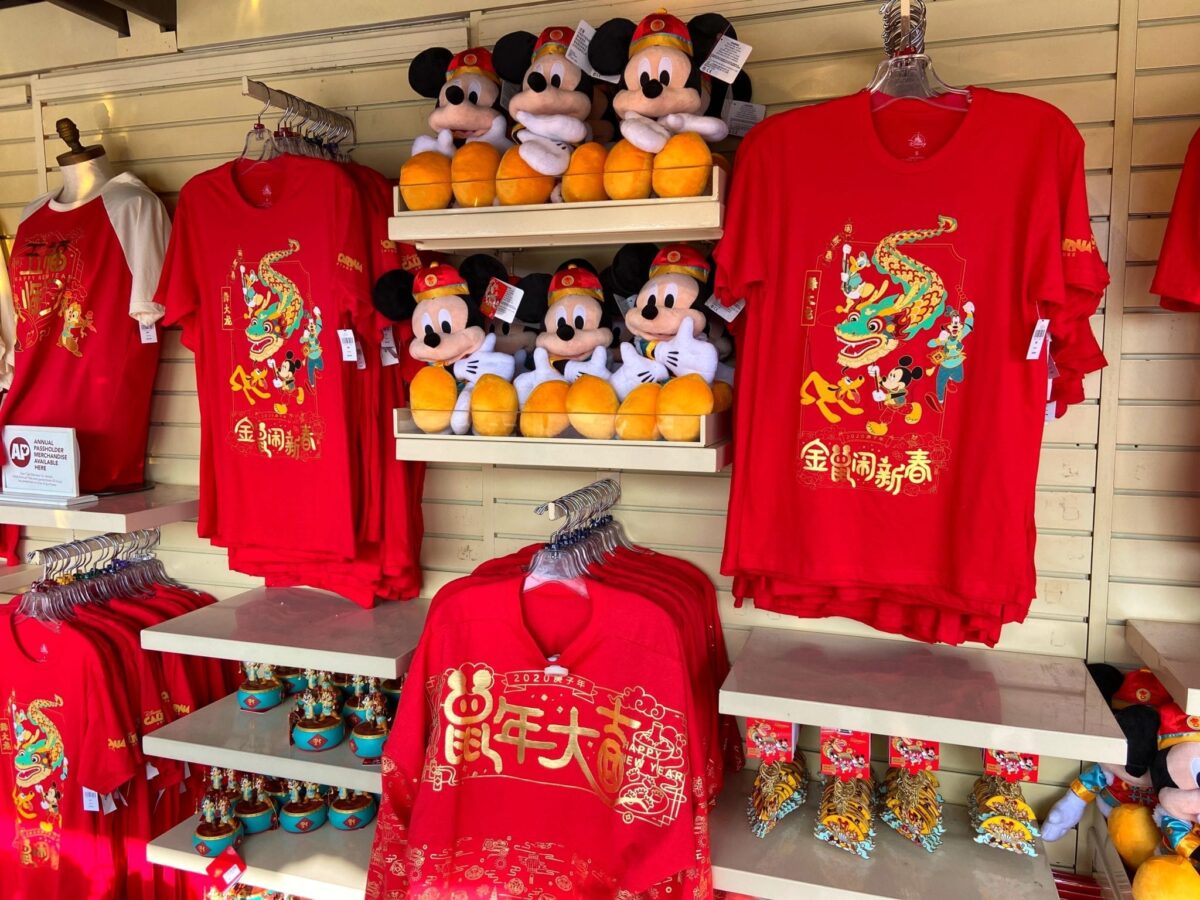 The route runs from the Pixar Pier Gate up to the Paradise Gardens Obelisk before heading back to the gate. In past years, not all dance troupes performed in each processional, so feel free to give the parade a re-watch if you’re still in the area when it rolls on by again.

Once you’ve claimed your culinary haul from the Lunar New Year Marketplaces or Paradise Garden Grill, take your spread over to the Paradise Garden Bandstand for some live music courtesy of Melody of China. This San Francisco-based group infuses Chinese folk music and centuries of tradition with contemporary flair in hopes of building a bridge between Chinese culture and America’s youth.

Chinese New Year temple fairs may be known for their entertainment and tasty street food, but they’re also a great place to do some people-watching and a little shopping. While you can’t purchase all kinds of handicrafts like you can in Asia, you can make your own crafts at Disney’s Lunar New Year celebrations or buy special holiday merchandise. And as for people watching, why not do some Disney character spotting instead?

Whether Christmas or Halloween, one of the highlights of the holidays at Disneyland is getting to see some of the characters all decked out in spiffy seasonal attire. Disneyland Lunar New Year 2022 is no exception. Several Disney characters will be popping up throughout the day in their most auspicious outfits to wave at guests and pose for (socially distanced) pictures.

The Paradise Gardens Gazebo is the place to go for most character sightings. Here, characters like Mulan and Mushu, Mickey and Minnie, Chip ‘n’ Dale and the Three Little Pigs will be greeting guests in their red-and-gold finery. Decorated for the occasion with peach blossoms, lush flowers and bamboo, the pavilion also makes a beautiful backdrop for your family photo.

Finally, China may be the country that first comes to mind when many people think of Lunar New Year, but Southeast Asian countries like Vietnam, The Philippines and Indonesia celebrate the holiday too. And who better to represent this picturesque corner of the world than Raya from Raya and the Last Dragon (Disney’s love letter to Southeast Asian cultures)? Raya will be making her Lunar New Year debut beneath the trees at the Redwood Creek Challenge Trail.

Do the characters’ elaborate costumes and red lanterns everywhere have you feeling inspired? Take a break and get crafty! Past kid-friendly activities include coloring and face painting, while even the adults will enjoy learning about traditional Chinese calligraphy from local artisans.

Share Your Dreams for 2022 at the Lucky Wishes Wall 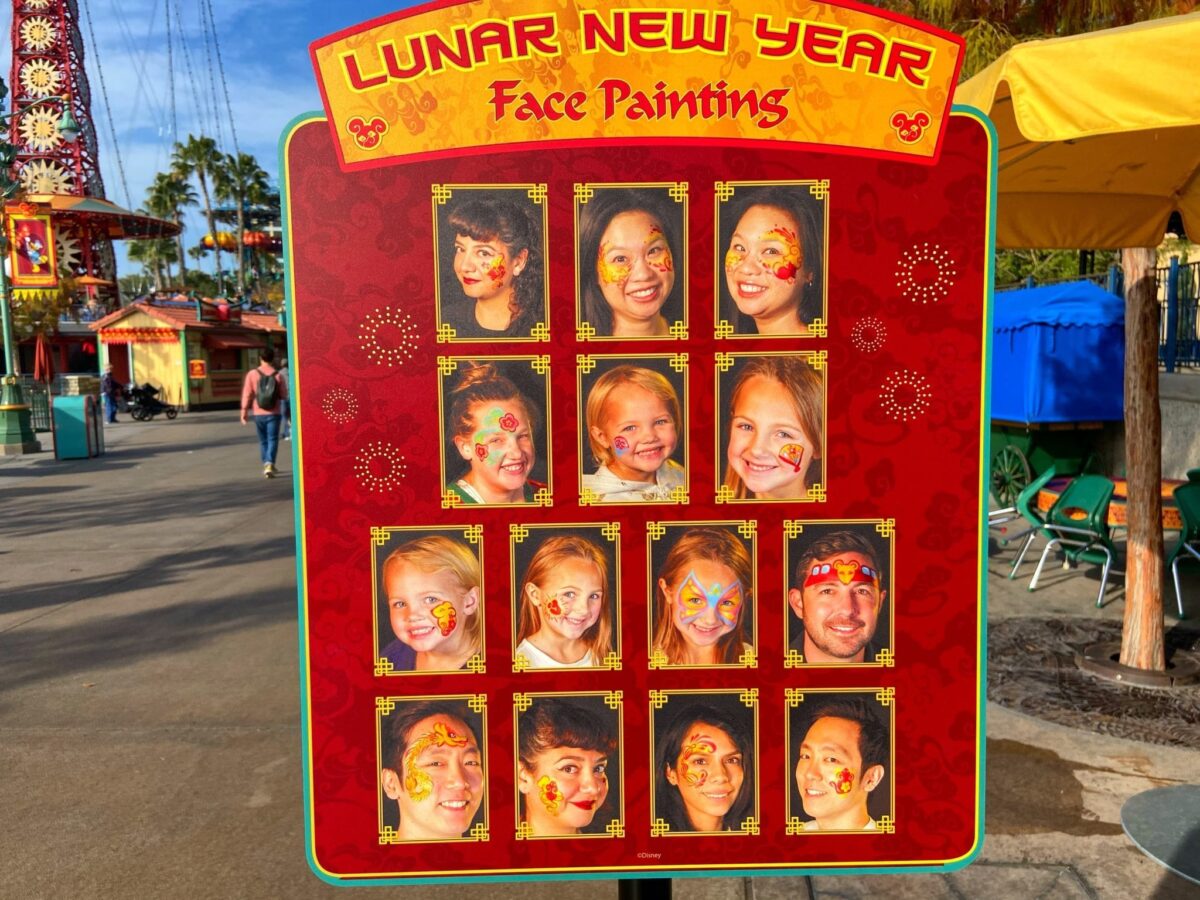 Lunar New Year is all about fresh starts and (hopefully) lots of money, luck, health and happiness in the upcoming year. To put those hopeful vibes out into the universe, make your way over to the Lucky Wishes Wall.

Similar to a Japanese tradition called Tanabata, guests can reflect on another year gone and their dreams for the future, writing down their wishes on pieces of paper then hanging them from the wall. Even the red slips of paper are reminiscent of hong bao, or red envelopes filled with cash, a Chinese New Year tradition.

If you don’t get a souvenir, did it even really happen? For those in the market for Chinese New Year swag with a sprinkling of pixie dust, you’re in luck – you’ll find tons of limited-time-only items in auspicious red and gold, including apparel, tumblers and plushies straight from Shanghai Disneyland.

One of our favorites this year is an adorable t-shirt celebrating the Year of the Tiger with…chipmunks? That’s right, rather than Tigger bouncing you into next year, this cute top features Chip ‘n’ Dale all decked out in pint-sized tiger costumes.

Hoping to grab a Disney Lunar New Year spirit jersey or limited-time Chinese New Year pins? Plan your visit for early on in the festival as quantities are limited and items sell out quickly.

Ready to welcome the Year of the Tiger at California Adventure Park? With delicious food, beautiful music, adorable Disney characters and plenty of Asian culture, your 2022 is sure to be off to an auspicious start after celebrating Lunar New Year Disneyland-style.

Hoping to spend more time noshing on dumplings and less time waiting around in line? If you’d rather not splurge on Disney Genie+, maximize your time with our 1-Day Disneyland Park Plan instead. Wish there was more room in your travel budget for those lucky bites? Save some cash with our discount Disneyland tickets.

Have you rung in Lunar New Year at Disneyland? Which characters are you hoping to see in their red and gold Chinese New Year outfits? Is the Sip and Savor Pass worth it? Let us know in the comments!