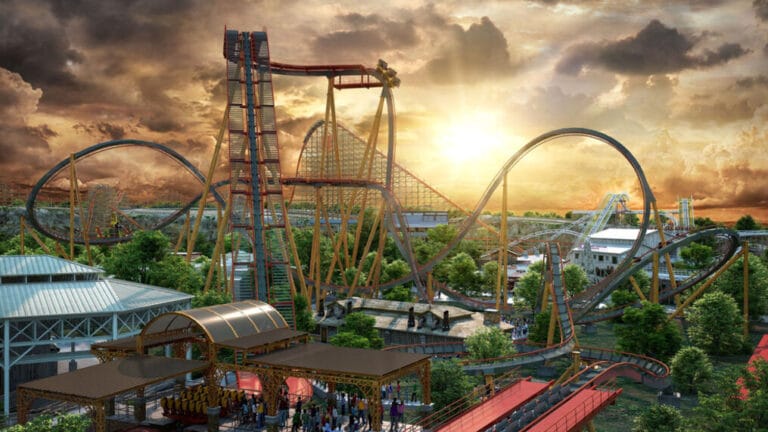 Ever since Six Flags opened the doors in 1961 to its first theme park, they have flown over Texas. Located in Arlington, Six Flags Over Texas is the original park where you’ll experience the start of its signature rides and attractions.

Get ready for a day of fun as you see why Six Flags Over Texas has remained one of the top parks in the chain. It showcases the park’s legacy with original themed sections and rides. It also delivers updated features that keep it on par with other parks around the country.

See what makes Six Flags Over Texas a must for theme park enthusiasts. Be sure to check-out our other Six Flags Theme Park Guide including Six Flags over Georgia.

Six Flags Over Texas preserves its founding heritage with original themed sections in the park from when it first opened in 1961. The park includes areas for each of Texas’ six flags: USA, Texas, Spain, France, Mexico, and the South. Over the years, its added new sections and combined others to let visitors experience the past and present charm of the park.

Walk through the Star Mall entrance, where you can head left to the original Texas themed-section that transports you to a wild west period. Coincidentally, it occupies the western side of the theme park, where you’ll find the famous Titan roller coaster and Arcade. The USA-themed section is to the right and the second of the original sections still guiding visitors to attractions along the Main Walkway and kid fun inside the Bugs Bunny Boomtown.

Six Flags Over Texas also has newer park sections. Gotham City is tucked in the northeast corner, where you’ll find superhero attractions like Batman the Ride, Catwoman Whip, and HARLEY QUINN Spinsanity. The adjacent Boomtown is styled like a turn-of-the-century oil boom community where the old buildings have been repurposed for theme park attractions.

Things to Do in Six Flags Over Texas 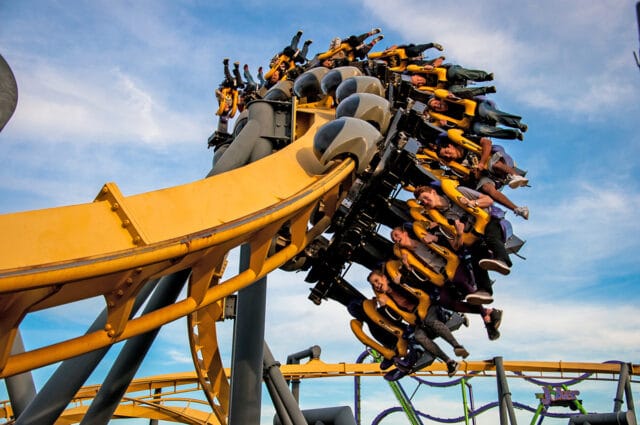 Themed thrill rides in Six Flags Over Georgia have given the park its reputation for heart-pumping fun. Of course, it’s only right that the original park sets the benchmark for thrill-seekers, so from the start of the park season until it closes, these are the rides that turn anxious riders into enthusiastic ambassadors raving about their excitement.

Humongous roller coasters tower over the park grounds as their train tracks rise at nearly arm’s length overhead and mere inches from touching the sky. Titan is one of the park’s signature coasters whose orange and teal frame is noticeable halfway across the park. There’s always a wave of hands rising as the car topples over the 255-ft drop and speeds around curves reaching 85 miles-per-hour!

Six Flags Over Georgia is no stranger to superlatives as rides like El Diablo shatter world records for the largest loop. Blood rushes to your head as you reach the peak inversion at 100-ft in the air before speeding back down. 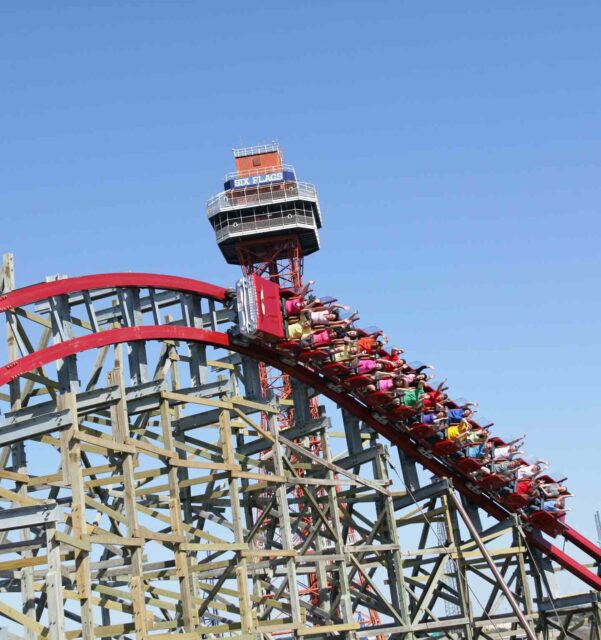 Become your own superhero as you try to survive obstacles laid out by infamous villains in the comic universe. MR. FREEZE: Reverse Blast unexpectedly jerks you forward as you speed in reverse around curves and up a 246-ft tall tower for views of trucks roaring past on the Tom Landry Freeway. And if you survived that, THE JOKER has something in store on their freestyle-flipping roller coaster filled with flips and freefall sensations.

Of course, it wouldn’t be Six Flags without a few staples found in other parks. Swinging 400-ft in the air on the Texas SkyScreamer gives a 360-degree view of Arlington from atop the park’s tallest ride. Strap yourself to Superman as he takes you up the 325-ft Tower of Power before freefalling one of the largest drop towers in the world. 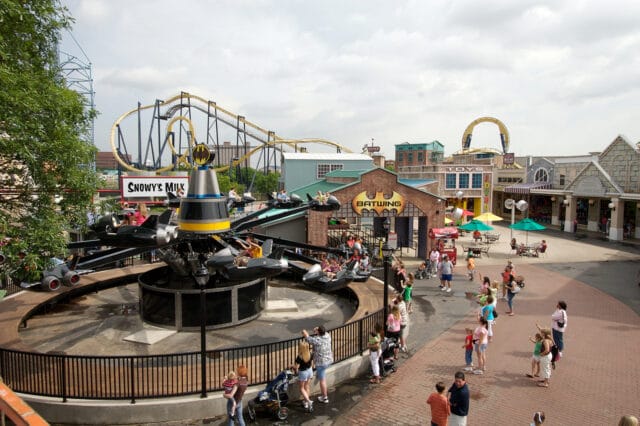 Six Flags is a destination for everybody with a mixed crowd of parents with strollers, big families with overly-energetic kids, and large groups on field trips. While these bite-sized thrill-seekers don’t quite meet the height requirements for the iconic roller coasters, there are plenty of other adrenaline-inducing riders that are perfectly designed for their size.

A family that rides together stays together—at least it’s a theory worth exploring as you enjoy some of the numerous rides where the seats comfortable fit adult and kid riders. So, go for a ride on the Mini Mine Train to experience eh 20-ft drops and bunny hills, providing air-time as you speed over them. Or in the cars lining the brim of El Sombrero before it spins at top-speeds and surprises you once it starts elevating.

Give your legs a rest and let the in-park transportation entertain you. Buckle up and let the kids take the wheel in the Chaparral Antique Cars to cruise the shady route through the Arlington countryside. And ride the elevator to the top of the Oil Derrick, whose panoramic views from the 300-ft observation deck lets you see globe Life Field, where the Texas Rangers play, and AT&T Stadium, home to the Dallas Cowboys.

If you’ve ever wondered how your kids will behave under the supervision of their favorite toon characters, visit Bugs Bunny Boomtown to see firsthand. Line them up for the Taz Tornado Swings, which will take them on a wild spin. Ride the Wile E. Coyote Grand Canyon Blaster to rocket through a mining town on a mini roller coaster. Kid-sized big cages take riders to the top of the Sylvester & Tweety State Fairis Wheel for views overlooking the town.

Six Flags Over Texas curates a world-class guest experience by offering shopping and dining venues inside the park. You can browse retail shops, restaurants, or snack stations for a quiet bite in between rides.

Whether craving Texas-style grub or wanting to indulge in the cultural cuisines inspired by the state’s diversity, the good news is that you never have to leave the park. You’ll find restaurants dotting the entire park so that you’re never too far away from a tasty meal.

After working up an appetite on the giant roller coasters in the park, you’ll need a Texas-sized meal to replenish your energy. You’ll need both hands to handle one of Bubba’s Texas Giant Hot Dogs or taste a finger-licking BBQ sandwich from Dry Hole Charlie’s. 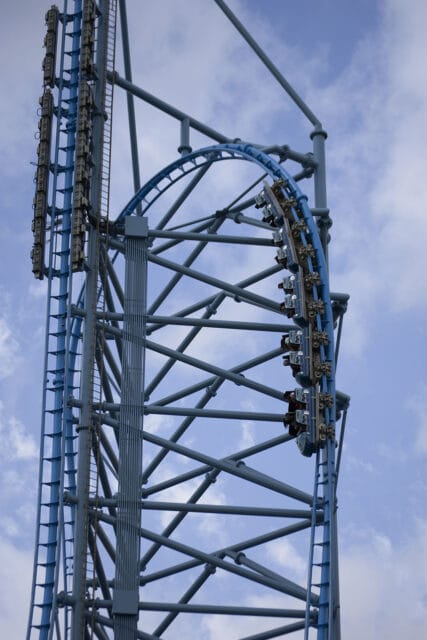 Lines for the rides and attractions are unpredictable when you don’t have the Flash Pass, so grabbing a snack on the go is the best way to ensure you can ride all your favorite rides. Stop by Boomtown Dippin Dots for a signature snack, taste the sweet treats from Casa del Churros, Cheetos Popcorn Mix in GOTHAM CITY, or a jumbo pretzel from Dusty Dans.

When you’re thirsty, fill your cup to the brim at one of the Coca-Cola Fill thrill refill stations in Spain, Star Mall, and GOTHAM CITY, or grab a seat to try one of the craft beers at Six Flags Icehouse.

How about something to commemorate your fun day at the Six Flags Over Texas? There are tons of shopping experiences in each themed park section where you can find the perfect souvenirs. Kids will reach for every plush doll and toy inside LOONEY TUNES MALL, find Six Flags-themed hats, shirts, hoodies, and other merch in Casa de Six Flags, or dress in gear decorated with Wonder Woman, Batman, Superman, and other superheroes in the Heroes Shop.

Expect the unexpected whenever you visit Six Flags Over Texas. Of course, most people come for the thrill rides, but it’s often the live entertainment inside the park that people talk about while exiting the park gates for the day. And with new talent showcased daily on its multiple stages, you’ll have something to look forward to every time you visit.

Six Flags Over Texas delivers family-friendly entertainment with interactive attractions that immerse you into the thrill or audience shows, providing encore-worthy performances. Take a walk through Casa Magnetica to experience the real-life optical illusions happening right before your eyes. You’ll be mind-boggled while watching objects magically roll uphill or standing unexplainably at tilts far enough to tip over. 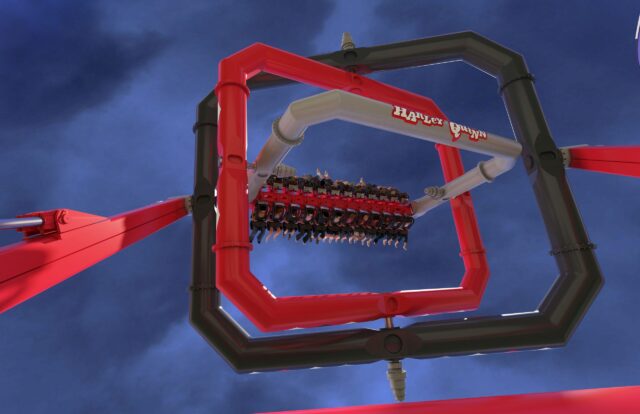 Crowds always have a roaring good time at the Honky tonk show. Each of its four shows per day gives Texas energy with local singing and dance numbers that will get you moving in your cowboy boots. Rock music played by live bands at the Stage in GOTHAM CITY makes the perfect crime-fighting theme music. The acoustic melodies played on the Icehouse Stage are excellent for relaxing your heart rate after a wild roller coaster ride.

Depending on when you visit Six Flags Over Texas, you might encounter a complete transformation of the park. It’s very much into the holidays and goes all out for its guests to keep them in the spirit regardless of the time of year it is. As if the rides aren’t scary enough, Fright Fest is a Halloween favorite when nighttime rides might be accompanied by zombies wandering the park. And see the illuminating lights, specialty shops, and other Christmas-themed attractions for Holiday in the Park.

Six Flags has cultivated a community of theme park enthusiasts who can enjoy rides and attractions across the US. There are always discounts available for frequent visitors and local specials you might come across in the local DFW communities.

Suppose you’re the type of traveler who plans entire trip itineraries around theme park visits or has a passion for finding the biggest thrill rides in any state that you travel. In that case, you might want to consider getting one of the Six Flags season passes. It has three tiers with unique perks for getting the most out of the Six Flags theme park chain: 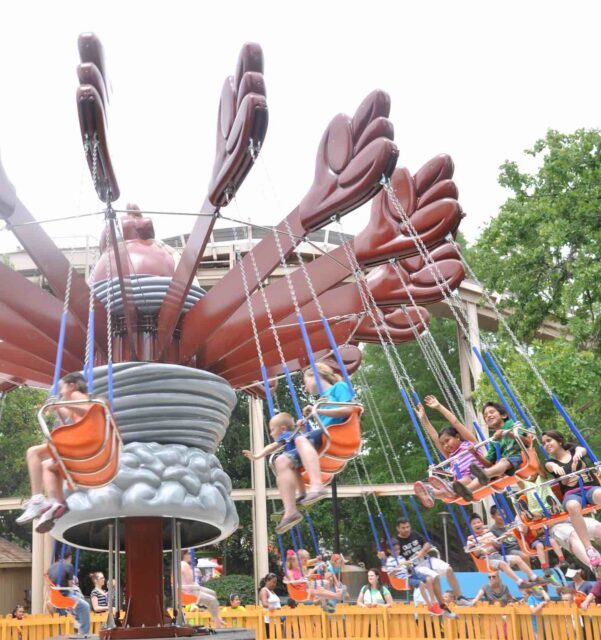 Since Six Flags is very active in the community, it participates in fundraisers with local schools and businesses. Check to see if your hotel has any special offers for day passes to Six Flags Over Texas.

Rides aren’t the only thing that will get your adrenaline pumping because it’s always a rush when you realize how much you can save during your visit. Now, you can enjoy more of the Six Flags thrills for less.

Use a few of these park perks to sweeten the deal of some of your favorite features of Six Flags.

Purchases season passes. If you’re a loyal park-goer, season passes can give you massive savings on attending any of the Six Flags theme parks and many other perks during your visit.

Get a dining pass. Prepare in advance for spending the entire day in the park with a dining pass that pays for a meal and gives you free drinks all day!

Use a Games Play Pass. Enjoy the gaming attractions in Six Flags Over Texas with a discount pass that gives you more play for your dollar.

Save time with FLASH Passes. Six Flags is about having fun on rides instead of spending most of your time waiting in line. Make sure to get a full day of rides and attractions with FLASH passes that put you in line virtually. 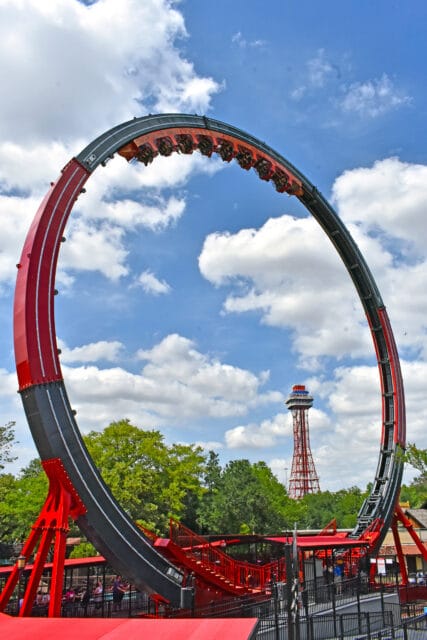 What was the first Six Flags theme park?

Six Flags Over Texas in Arlington, TX, was the first theme park in the chain, opened on August 5th, 1961.

What do Six Flags over Texas represent?

Six Flags Over Texas represent the USA, Texas, Spain, France, Mexico, and the South. These original sections are still found in the park. USA and Texas remain individual themed sections while Mexico and Spain and Old South & France have been combined.

What is the oldest ride in Six Flags Over Texas?

Go for a round-trip ride on the Six Flags & Texas Railroad. The one-mile route travels its original route from the park’s first season between Texas and Boomtown.