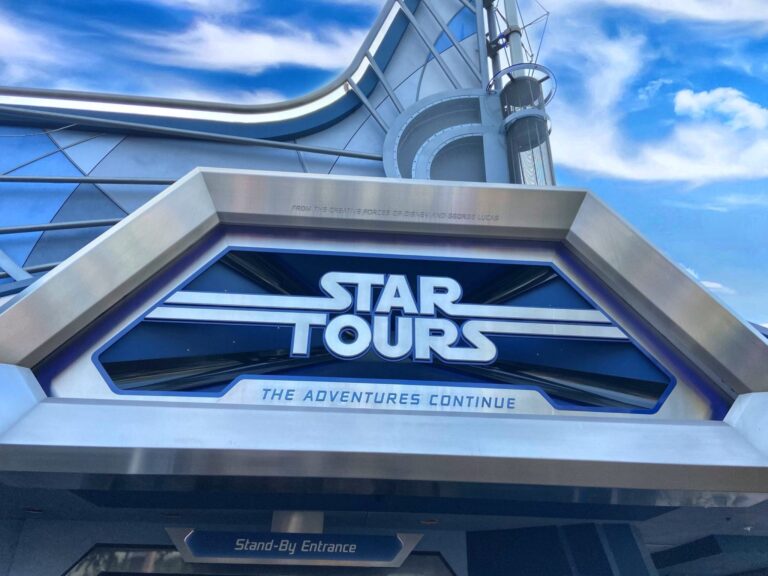 Star Tours, as I’m sure you’ve gathered, is a Star Wars experience where guests are invited to take a tour from planet to planet aboard a starspeeder. Your job is to simply sit and enjoy the ride as the pilot drives you to your destination. Of course if this actually happened it would be the most boring attraction ever. So that’s not what happens! 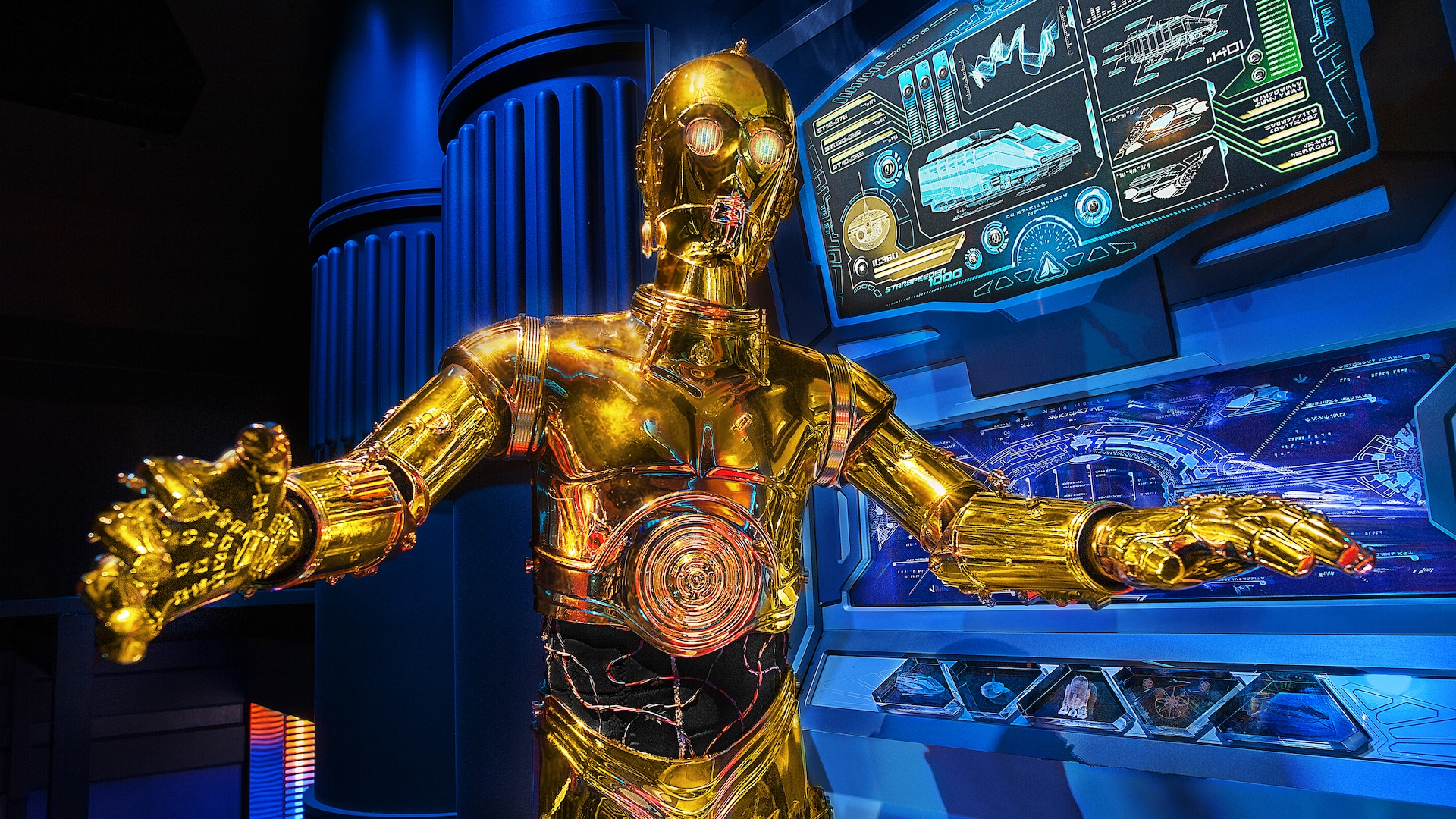 The original Star Tours was the same ride every time you took it. Rex was your pilot, a robot with some quirky flaws and a sense for danger and adventure. After this attraction received it’s revamp it became a lot more interesting. Rex the pilot was replaced by C3PO (Rex is now found over in Oga’s Cantina in Galaxy’s Edge) and what was once the same every time is now available in over 40 different combinations.

Disney teamed up with Lucasfilms for the revamp and decided to make the attraction 3D with the ability to tell a different story each time. Basically there are 4 sections that make up your adventure. A beginning scene which determines how you exit the docking bay, a second scene after coming out of light speed, a transmission message from someone and then a final battle scene that concludes with you docking the ship.

Because there are multiple versions of each of these 4 sections you could see a different adventure each time you board Star Tours. It’s actually quite fun and keeps things interesting. And since Disney purchased Lucasfilm several years back they continue to add new scenes from the new Star Wars films as they come out. 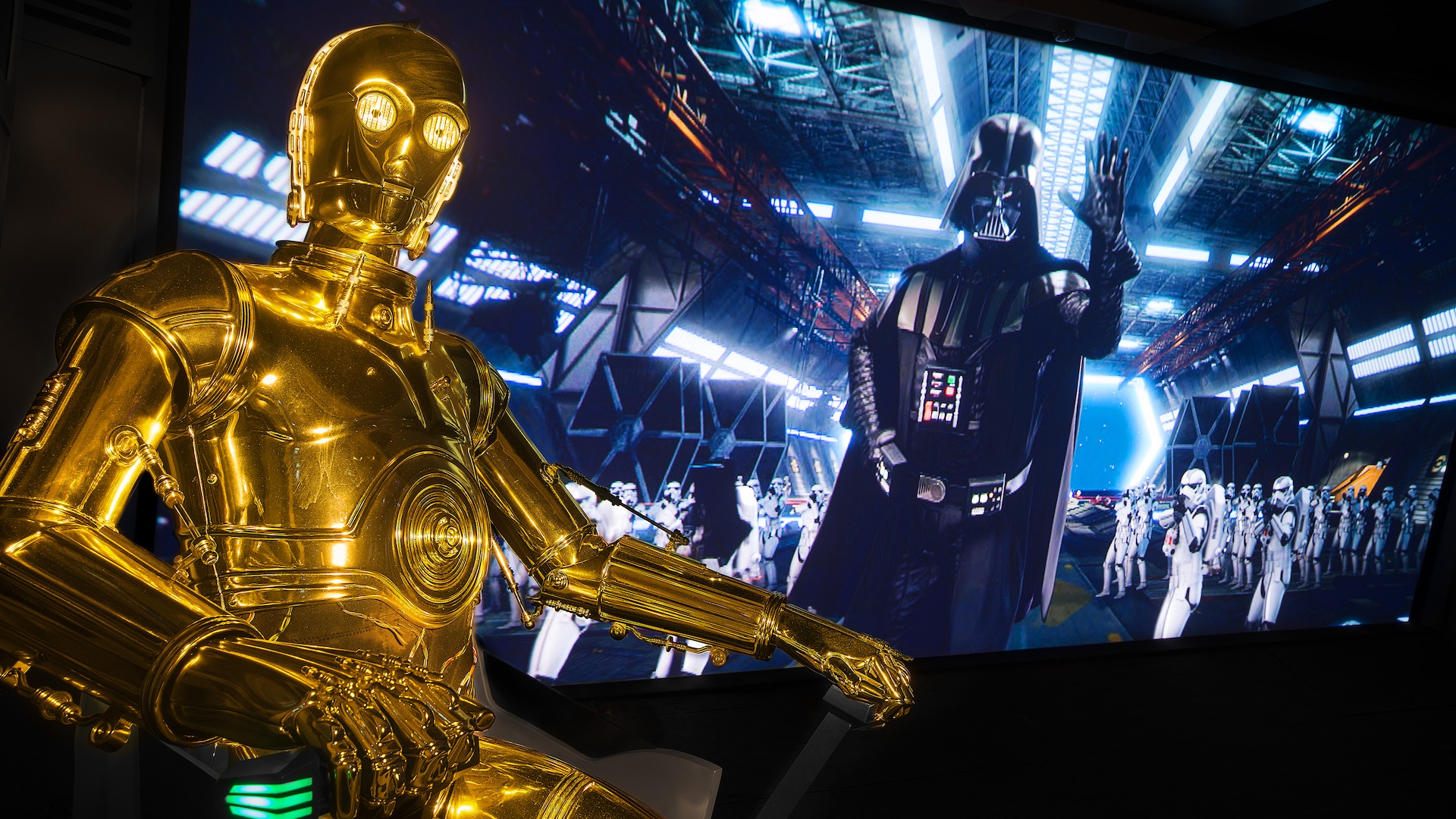 One of the cooler things that happened after the revamp is the inclusion of a Star Tours guest into the story each time you ride. Before the attraction begins a photo is taken of a randomly selected guest who is then inserted into the story as a Rebel Spy. They very lightly become the focus of the mission (or some missions) as Star Tours races to deliver the spy safely.

I’ve been the Rebel Spy twice in all my years of riding and it’s actually pretty fun. They even have a tee-shirt that you can purchase in the shop afterwards that says “I am the Rebel Spy,” or something along those lines.

So here’s what you can expect when you ride Star Tours at Disneyland Park: There are three lines available for this attractions. First is the standby line which I can’t describe very well at the beginning because I’ve never waited in it. You can expect to wait about 30-45 minutes in this line before being boarded.

The second line is Fastpass and that takes you directly into the main building and past the standby line but through all the same rooms.

The Fastpass line typically takes you right into the second room before you come to a stop so there’s a decent amount of line that you skip. You can expect to wait about 10-15 minutes before boarding.

The third line is a single rider line that they added in 2019. It basically does the same thing as the other 2 lines but it usually much faster. Keep in mind that you’re typically separated from your party when loaded at the gates though this attraction gives you a better chance of being loaded with someone in your group than most.

Once you enter the main building you’ll weave through one room that features a Starspeeder with R2D2 and C3PO. 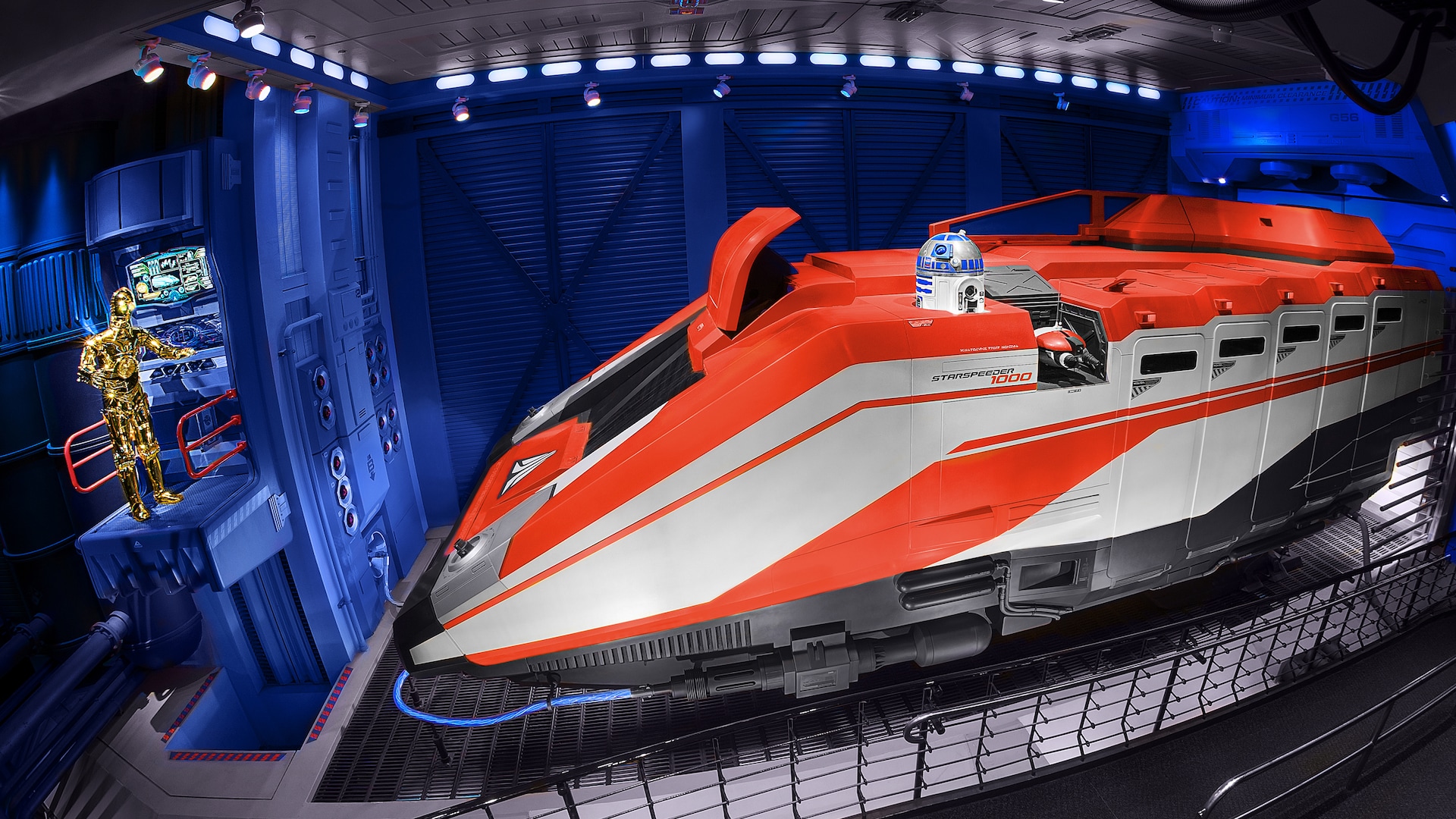 You’ll stand here for a little while and watch a video on what’s going on in the hangar as you wait for your Starspeeded to arrive. You’ll also be given some instructions. Once it’s your turn to board the doors in front of you will open and you’ll enter the ship and take your seat. Store all your backpacks and jackets under th seat, put your seatbelt on and prepare for a seatbelt check with a Cast Member. 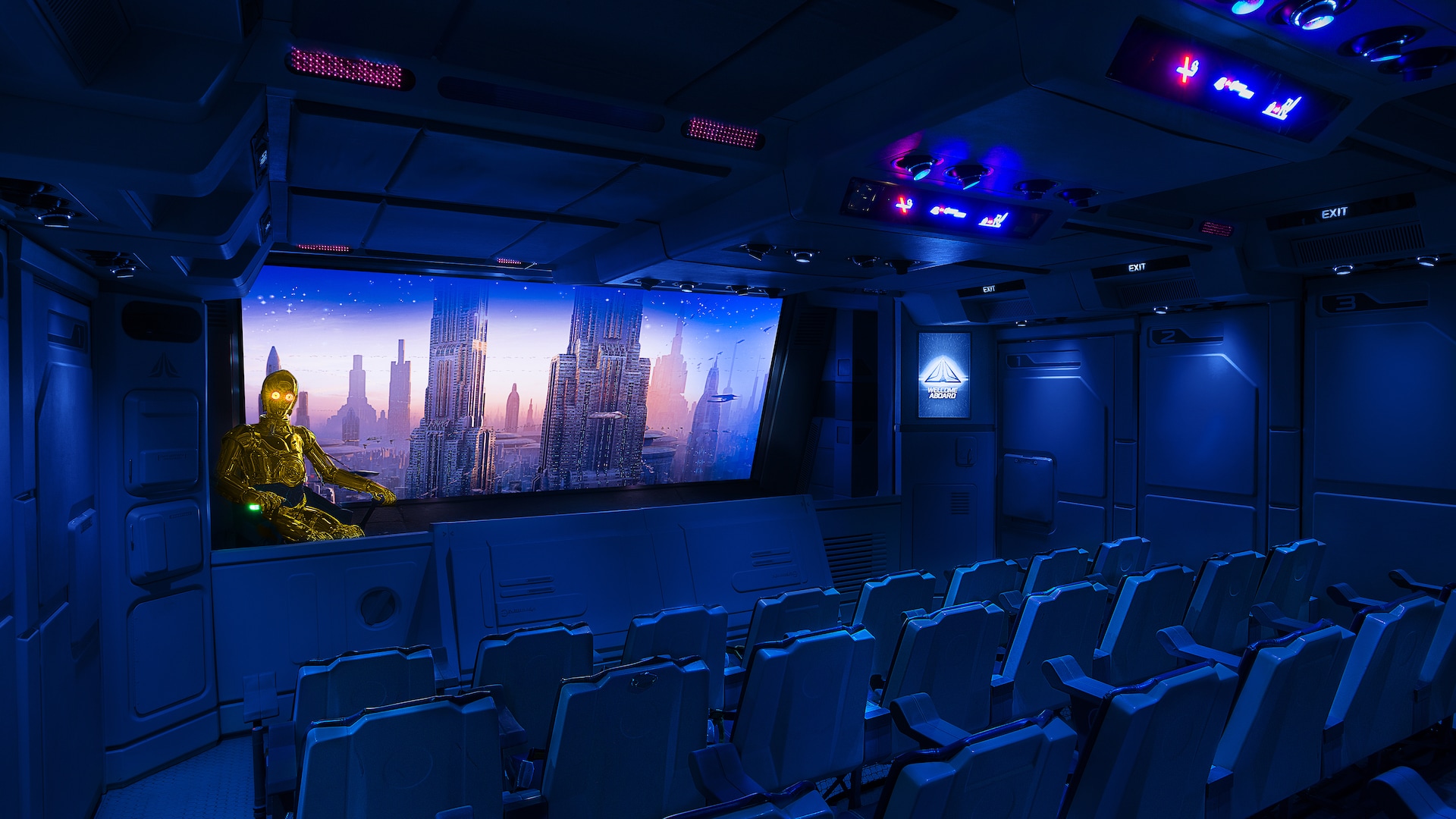 Once the seatbelt check is completed you’ll be advised to put your flight glasses on. The room will go dark after a few seconds and then the ride begins! C3PO has no idea what’s going on and you’re about to get into a whole lot of trouble and fun. Since each experience is different I won’t describe them but you’ll have fun not matter what.

This is a simulation attraction that has 3D glasses and moves up and down and side to side. If you are prone to motion sickness you may want to skip riding or take some medicine before hand.

When your ride is over you’ll remove your seatbelt and exit the ship. Be sure to turn in your flight glasses and enjoy some Star Wars shopping!