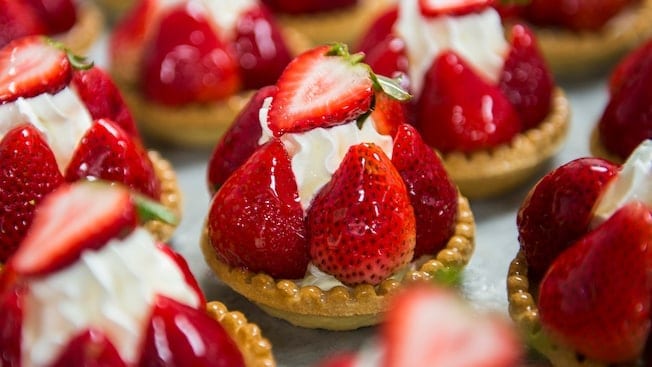 There’s no doubt that dining is a major part of any Walt Disney World vacation. While attractions may take the number one spot of things most important, dining is a close number two. But it’s not just any dining. It’s dessert dining. Breakfast, lunch and dinner can be yummy but what really get me motivated are the desserts!

I’m not writing this article based on seasonal desserts that you can only get if you travel right now. I’m choosing desserts that have been a staple at the parks and, unless Disney changes their menu, will be there the next time you travel.

I’ve bolded the locations of each dessert so you can notate where to find them. With that said, bon appetit! 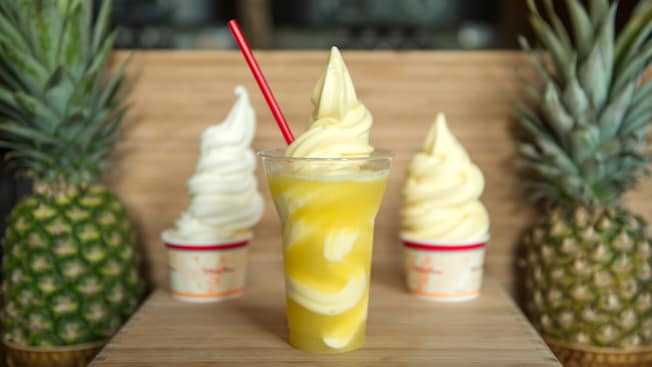 It’s probably the most sought-after dessert of park visitors and while the recipe may have made its way outside the parks, nobody does it like Disney. You can enjoy several flavors of this dessert but the most popular is pineapple. If you want to get crazy with it you can make it a float which is pineapple ice cream with pineapple juice.

Most guests will get theirs at Aloha Isle in Adventureland at Magic Kingdom Theme Park though there are a few other places. If you’re lucky enough to be staying at Disney’s Polynesian Resort you can visit Pineapple Lanai where you can grab a Dole WHIP and maybe even a few unique flavors!

In you’re in Disney’s Animal Kingdom Theme Park be sure to stop by Tamu Tamu Refreshments where you can grab a Dole WHIP including the Simba Sunset which is pineapple ice cream with watermelon, strawberry and coconut flavored syrup! 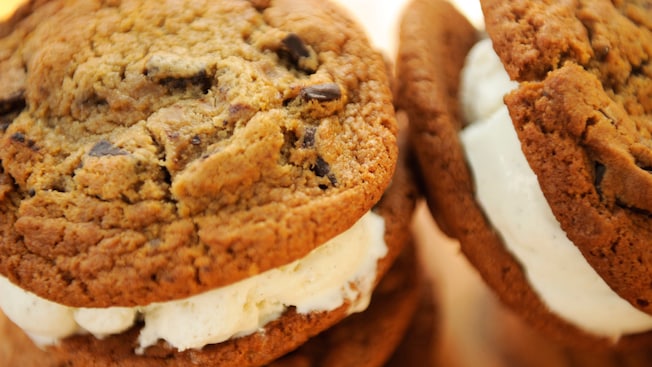 I always refer to this place as the corner shanty because it’s tiny and doesn’t look like much at first glance. Look at a menu though and you’ll see that this place has a lot to offer when it comes to desserts.

The staple here is the Ice Cream Cookie Sandwich which is a scoop of vanilla placed between two freshly baked cookies. It’s incredible!

If you’re really looking for something unique try the Apple Crisp á la Mode. This is actually my most favorite dish to get when I’ve had too many cookies.

I came across this dessert not too long ago and thought I’d give it a try. I was filled with regret immediately after taking my first bite. Regret that I hadn’t stopped by sonner and eaten more of them.

It’s a flakey pastry with a semi-sweet chocolate filling topped with pink and purple frosting. It’s the perfect combination. Truthfully I have it listed under desserts but it’s actually a great breakfast item too.

You can find it at Cheshire Cafe in Fantasyland at Magic Kingdom theme park. 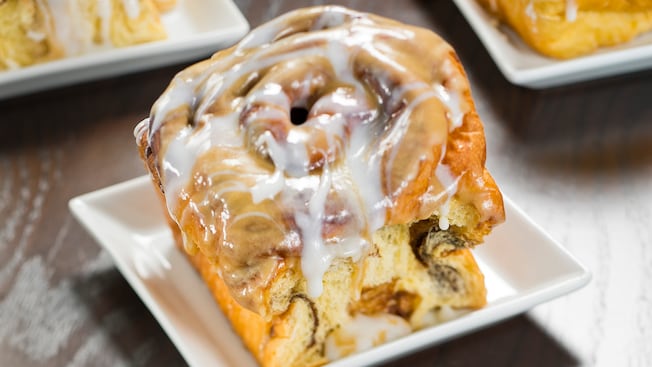 These are especially dear to me as my mother would make cinnamons rolls growing up and they were the best. So when I came across these at Gaston’s Tavern in Magic Kingdom I had a little Ratatouille moment with my first bite. It sent me back to my childhood where I had eaten many a cinnamon rolls with my siblings. Magical!

These are actually served all day long, not just at breakfast but they do run out so be aware. They are typically served nice and warm. It’s a strange name for a dessert but once you see the picture it all makes sense. I would consider this one of the most ultimate desserts at Walt Disney World. While there are smaller baby kitchen sinks in wimpy plastic one-scoop containers ?, the mama sink is what it’s all about!

This dessert has everything in it, literally. Five scoops of ice cream including vanilla, chocolate, cookies n’ cream, strawberry and mint chocolate chip, smothered in every topping they have. This thing is insane. So insane in fact that they announce the fact that you’re getting it and turn some sirens on just so everyone else knows.

They say this thing serves 4 people but honestly, bring a few extra friends. You can experience The Kitchen Sink at Beaches and Cream located at Disney’s Beach Club Resort.

It doesn’t sound fun for anyone but don’t let the name fool you. It’s a very delicious dessert found at Kringla Bakeri Og Kafe in Norway at Epcot. I discovered this dessert several years back and now stop by to enjoy one every time I’m at World Showcase.

It’s a Norwegian treat made out of a sweet roll filled with custard and topped with coconut. All these great flavors combined make it incredibly delicious. And no, you don’t have to go back to school to enjoy it. 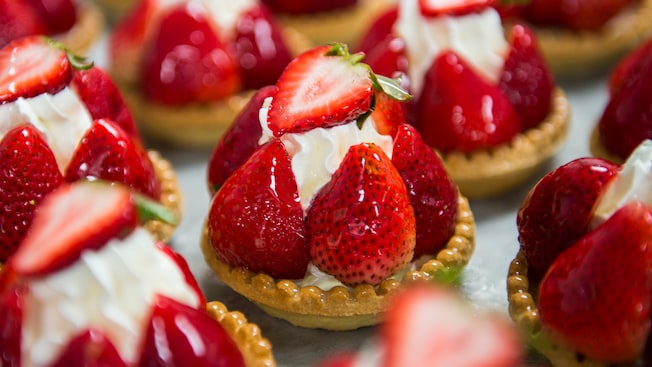 France is known for its delectable desserts so it shouldn’t surprise you at all the this strawberry tart is found in the France pavilion at Epcot in a little restaurant called Les Halles Boulangerie-Patisserie.

No reservations required here, just walk in and be amazed at what you see. Of all the desserts this place sells I always come back to the Fraises. Fresh-cut strawberries layed on top of thick cream inside a small tart. It’s the perfect size and one you can sort of feel healthy about because it has fruit in it.

You’ll probably end up picking out several desserts to try because this place is a haven for them. 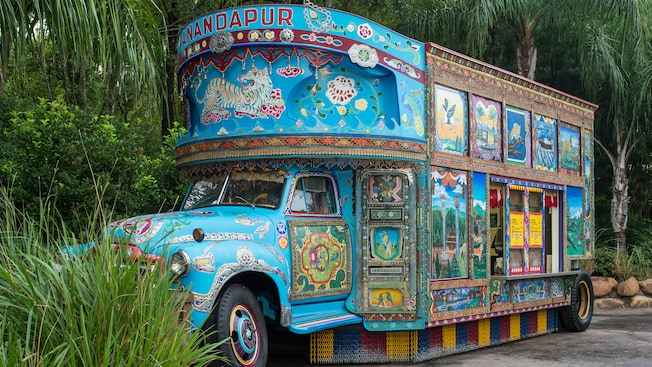 It doesn’t sound that special, soft serve ice cream, but when you’ve been out in the heat and humidity and just need something to help you cool off, the Anandapur Ice Cream Truck at Disney’s Animal Kingdom will be your saving grace! It’s a very simple menu: vanilla, chocolate or twist in a waffle cone.

It’s definitely not your average soft serve ice cream though. You know how when you go camping and make a dinner out of canned soups and you think it’s the greatest thing ever but when you make it at home it just isn’t the same? That’s how I would describe this. It’s a must-try in my opinion; no regrets until you’ve finished it. It’s a dessert fit for any space traveller. Guests who find themselves visiting Pandora will definitely want to grab this sweet treat found at Pongu Pongu, just outside the gift shop of Flight of Passage.

While the joint is pretty small, these Pongu Lumpia’s are one of the best items on the planet. Lumpia’s are spring rolls stuffed with cream cheese and pineapple and coated with some sugar on the outside. One in enough to make anyone full so be sure to share the second one with a friend. Also, grab a drink because these things are rich! So far all of my listed desserts have been accessible without reservations. This is an exception to that but it’s totally worth it. Found at the California Grill in Disney’s Contemporary Resort, this strawberry crème brûlée is downright magical.

Although it looks like a simple dessert, it’s so rich that it ends up being just the right amount. It’s Vanilla Bean Crème Brûlée accompanied with fresh strawberries, coconut whip, sponge cake and cornflake crunch. Don’t share this baby because you’ll want to eat it all. It’s okay to be selfish sometimes.

It’s not just any hot fudge sundae. It’s Ghirardelli’s world famous hot fudge sundae and it’s so incredibly good. While there are no locations inside the theme parks, you can enjoy this sweet treat at Disney Springs from the Ghirardelli Soda Fountain Shop.

There are tons of ice cream options on the menu but nothing is more classic than this sundae. Premium vanilla ice cream covered in milk chocolate hot fudge, topped with whipped cream, nuts or sprinkles and a cherry. Every bite brings you closer to heaven.