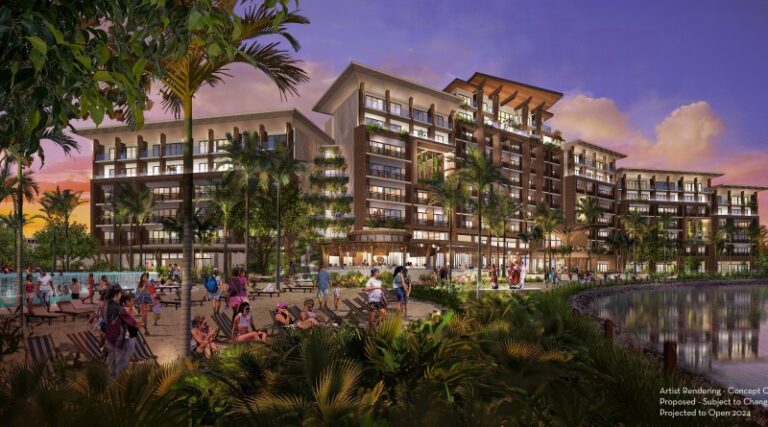 On the heels of their last announcement for new and refurbished villas at Disney’s Grand Floridian Resort & Spa, Disney Vacation Club announced today that they would be expanding their DVC presence at the Polynesian Village Resort by adding an entirely new wing consisting of move deluxe studios, 1 bedroom, 2 bedroom and 3 bedroom grand villas.

The resort will become the largest DVC resort that’s not entirely dedicated to DVC members like Saratoga Springs Resort and Disney’s Riviera Resort are. The expansion solidifies the ending of the Spirit of Aloha show that once resided in the area of the new wing.

Guests visiting or staying at the Polynesian Village during its construction phase are not expected to miss anything including closures to pools, restaurants or shopping. No specific date has been set for the opening of the new wing or pricing for DVC members. The new addition will not require current owners to add on or purchase new points for the wing.

Here is the official press release:

“It’s no secret that our Members and Guests love the monorail resorts at Walt Disney World,” said Bill Diercksen, senior vice president and general manager of Disney Vacation Club. “Expanding our Disney Vacation Club offerings at the Polynesian would give our Members and Guests yet another incredible option for staying close to the magic while making vacation memories that last a lifetime.”

Inspired by the early concepts for Disney’s Polynesian Village Resort, the Imagineers of today are honoring the past while furthering the resort story with this innovative addition. Projected to open in late 2024, the proposed vacation ownership property would complement the existing resort and evoke the spirit of the Pacific Islands.

Situated on the shores of Seven Seas Lagoon, the proposed property would join the rest of the resort in offering stunning views of the Magic Kingdom. Proposed plans would offer additional rooms, new recreation offerings and dining options. More information and project details will be shared at a later date.

Since 2015, Disney’s Polynesian Villas & Bungalows has been a favorite resort destination, offering an island paradise in the middle of the magic. Disney’s Polynesian Villas & Bungalows currently has 380 Disney Vacation Club villas, including the largest Deluxe Studios at any Disney Vacation Club resort at Walt Disney World and unique two-bedroom Bora Bora Bungalows, located over the waters of the Seven Seas Lagoon – the first of their kind at Disney.