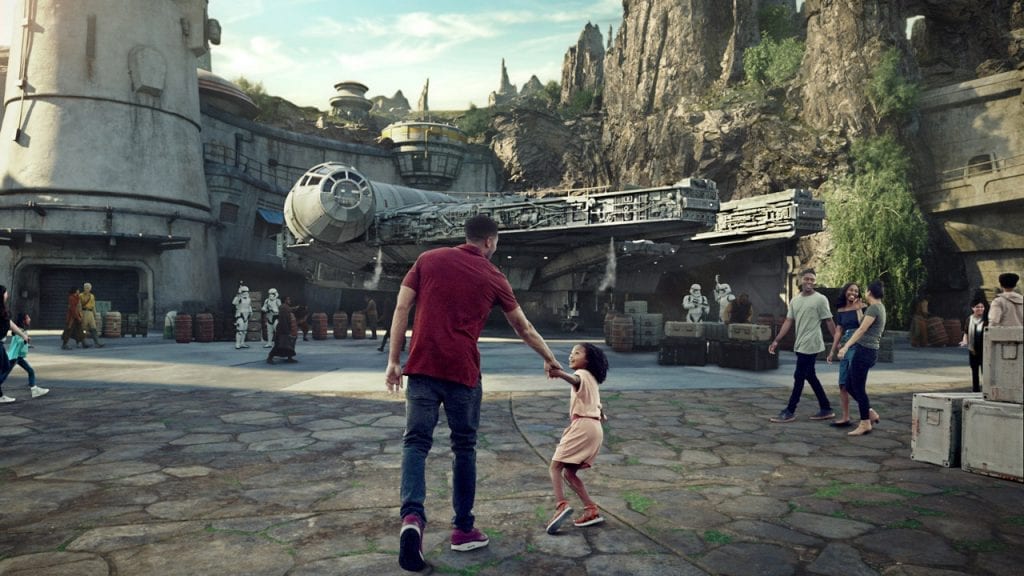 Minutes ago, Disney Parks, Experiences and Products shared an exciting announcement many of you have been waiting to hear – Star Wars: Galaxy’s Edge is opening ahead of schedule on May 31 at Disneyland® Resort in Southern California and August 29 at Disney’s Hollywood Studios® in Florida.

That’s right – it’s debuting early because of high guest interest in experiencing this new, immersive land.  On opening day for phase one, you will be able to live your own Star Wars story and take the controls of the most famous ship in the galaxy aboard Millennium Falcon: Smugglers Run, sample amazing galactic food and beverages, explore an intriguing collection of merchant shops and more.

And for phase two, opening later this year, will be Star Wars: Rise of the Resistance, the most ambitious, immersive and advanced attraction ever imagined that will put guests in the middle of a climactic battle between the First Order and the Resistance and will blur the lines between fantasy and reality.  In light of tremendous demand, Disney made the decision to open the land in phases to allow Guests to sooner enjoy the one-of-a-kind experiences that make Star Wars: Galaxy’s Edge so spectacular.

Guests planning to visit Star Wars: Galaxy’s Edge at Disneyland Park between May 31 and June 23, 2019 will need valid theme park admission and will be required to make a no-cost reservation, subject to availability, to access the land. Information on how to make a reservation will be available May 2nd, 2019. Guests staying at one of the three Disneyland Resort hotels during these dates will receive a designated reservation to access Star Wars: Galaxy’s Edge during their stay (one reservation per registered guest); valid theme park admission is required.

Now, if you’re as excited as we are about experiencing Star Wars: Galaxy’s Edge, we have important information you should know before you go and begin your own Star Wars adventure in a galaxy far, far away.

Here’s an update from Disney on Star Wars: Galaxy’s Edge:

Park Admission: Regular theme park admission is required to enter Disneyland Park and Disney’s Hollywood Studios. There will not be a separate ticket for Star Wars: Galaxy’s Edge.  To visit Star Wars: Galaxy’s Edge at Disneyland Park between May 31 and June 23, 2019, guests will need valid theme park admission and will be required to make a no-cost reservation, subject to availability, to access the land. Guests can make a no-cost reservation starting May 2nd on Disneyland.com.

Land Entry: Because we anticipate galactic excitement during the opening months this year, we are planning ahead to deliver the best possible experiences for our guests.  Star Wars: Galaxy’s Edge will be open during normal park operating hours. It will not be included in Extra Magic Hour or Magic Morning at Disneyland Park. It will be open during Extra Magic Hours at Disney’s Hollywood Studios.

Attractions: Disney FASTPASS service, including access via Disney MaxPass, (at Disneyland Park) and Disney FastPass+service (at Disney’s Hollywood Studios) will not initially be offered at Millennium Falcon: Smugglers Run. We will continually evaluate our operations and services in order to help provide a great guest experience.

Planning:  You should also note that vacation packages, park tickets and Disney Resort hotel stays do not guarantee access to Star Wars: Galaxy’s Edge. The land —including participation in its experiences—will be subject to capacity restraints and other restrictions.