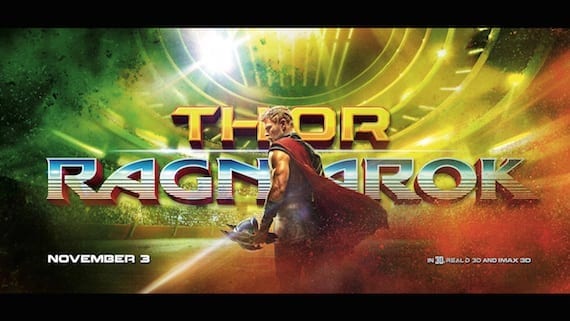 It’s time to travel across the nine realms to Asgard for a sneak peek at the epic adventure “Thor: Ragnarok,” thundering into theaters next month.

You can catch the limited preview of scenes from “Thor: Ragnarok” starting this weekend at Disneyland® Resort, featuring a display of props and costumes used in the production of the film. The “Thor: Ragnarok” Sneak Peek, presented in 3D with special in-theater effects, will be showing in the Sunset Showcase Theater at Disney California Adventure® park Oct. 6-Nov. 10, 2017.

In “Thor: Ragnarok,” Thor is imprisoned on the other side of the universe without his mighty hammer and finds himself in a race against time to get back to Asgard to stop Ragnarok – the destruction of his home world and the end of Asgardian civilization – at the hands of an all-powerful new threat, the ruthless Hela. But first he must survive a deadly gladiatorial contest that pits him against his former ally and fellow Avenger – the Incredible Hulk!