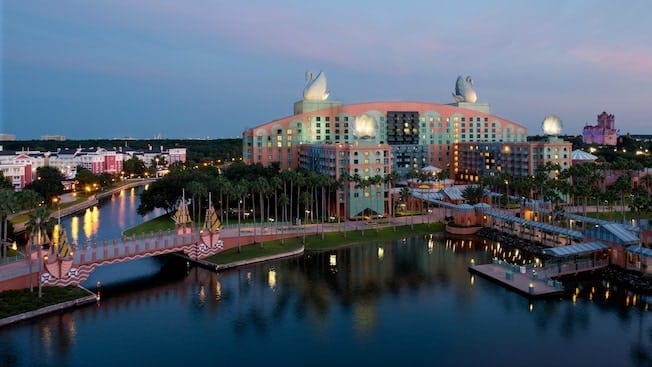 The Swan Hotel is a Deluxe Hotel at Walt Disney World!

The Swan Hotel isn’t our favorite hotel in the EPCOT area or even in general for Walt Disney World. Lots of people get confused on the Swan Hotel, if it is or isn’t owned by Disney and how that whole relationship works. Get ready for some unique history! Disney owns the land the hotels were built on. A separate company built the building on the land and leases them to Disney. A 3rd party was brought in to manage the hotel, Starwood Hotels and Resorts.

So why did Disney do this in the first place since they own the land? The company who built the hotel is also the company who built EPCOT. In their deal with Disney to build EPCOT they claimed exclusive rights to any convention hotel built on property. Thus Disney partnered with them on the venture of the Swan Hotel and its sister hotel Dolphin.

Because the Swan Hotel is catered to being a convention hotel we’re not huge fans of it. It’s always busy with business folks and their conventions. So really busy most of the time.

The hotel does feature several restaurants to dine at which is nice. It’s also close to the Boardwalk Entertainment District which offers tons of dining and activities.

You can walk from the Swan Hotel to EPCOT and Hollywood Studios which we love. You can also take a ferry boat to both as well.

Some of the rooms offer great views of the EPCOT area including the fireworks show from both parks.

We recommend Park Savers for the best price on this hotel. They can offer pricing that no one else can! And it’s backed by their low price guarantee so you don’t have to worry about price once you’ve booked. They’ll match any price you can find for the Swan Hotel*.

There are several other hotels located in the EPCOT area including the Boardwalk Inn Hotel, Beach Club Hotel and Yacht Club Hotel.

*Subject to terms and conditions. Visit Park Savers for more details and how to book.