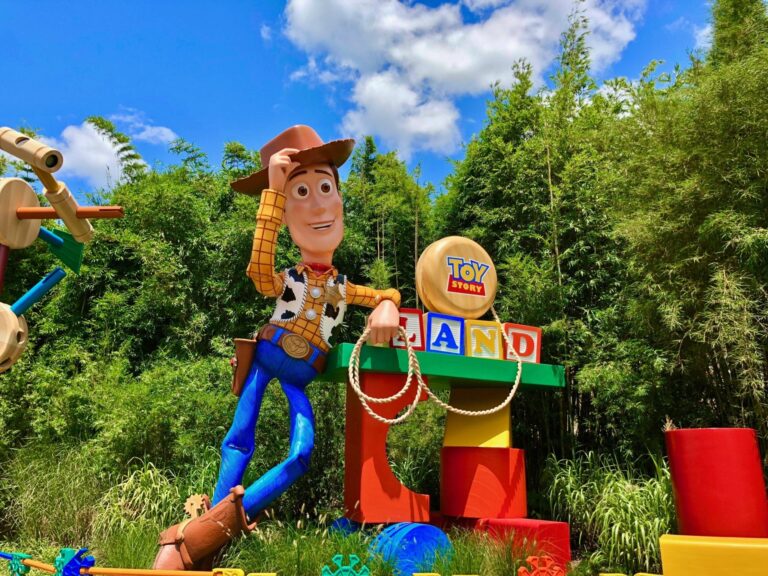 Toy Story Land Guide is a great way to discover all the things that this new land has to offer. Toy Story Land Opened June 2018 at Disney’s Hollywood Studios at the Walt Disney World Resort. It’s location is directly behind the Chinese Theater at the back of the park. The new land features both attractions and dining. Keep reading our Toy Story Land Guide for more detailed information on these things and more!

There are two new attractions at Toy Story Land. Both are aimed at the tween age and under (anyone can ride and should). First is the Slinky Dog Dash. This is a coaster ride featuring Slinky from Toy Story. Guests load into Slinky Dog coaster cars and speed off on a fun track that includes lots of ups and downs, spirals, sharp turns and some fun acceleration. There is a height requirement of 38″ in order to ride. Each car has places to store items such as small bags and phones. The ride lasts just over a minute in total. See our video below to see what the coaster is like particularly at night time (the track lights up and it’s pretty cool)! 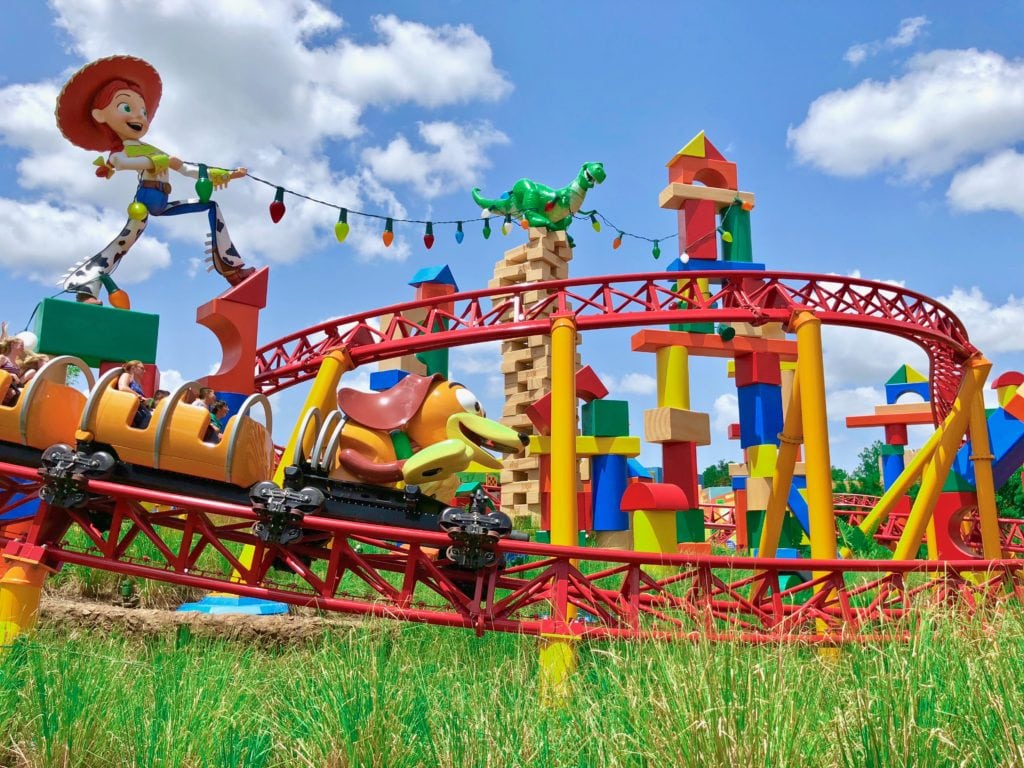 We have to mention that as you are waiting in line for Slinky Dog Dash you should listen to what Slinky and the other toys are saying over the speakers. Some of the lines are pretty funny. One in particular that we loved is when Slinky says “this here’s the wildest ride in Andy’s room!” Hopefully most of you catch on to that but if you don’t it’s a subtle shout-out to Big Thunder Mountain RR where the host says, “this heres the wildest ride in the wilderness!”

The second ride in our Toy Story Land Guide is the Alien Swirling Saucers. This is ride is a replica of Maters Junkyard Jamboree in California Adventure Park at the Disneyland Resort. It involves guests being towed behind a Green Alien in a rocket ship and being swung side to side as you go around a circular track. If you get dizzy from rides that go in circles, you should be able to handle this as it doesn’t go in circles and circles continually. The attraction itself is pretty big and is completely covered so guests can stay out of the hot sun. Guests must be 32″ or taller to ride this attractions.

Toy Story Midway Mania is not a new attraction but it’s entrance was moved so that guests enter the attraction via Toy Story Land now. There is a new track that is open too so guests move quicker in the line though it still holds a pretty wait time. We always suggest making FastPass+ reservations before you arrive at the parks. 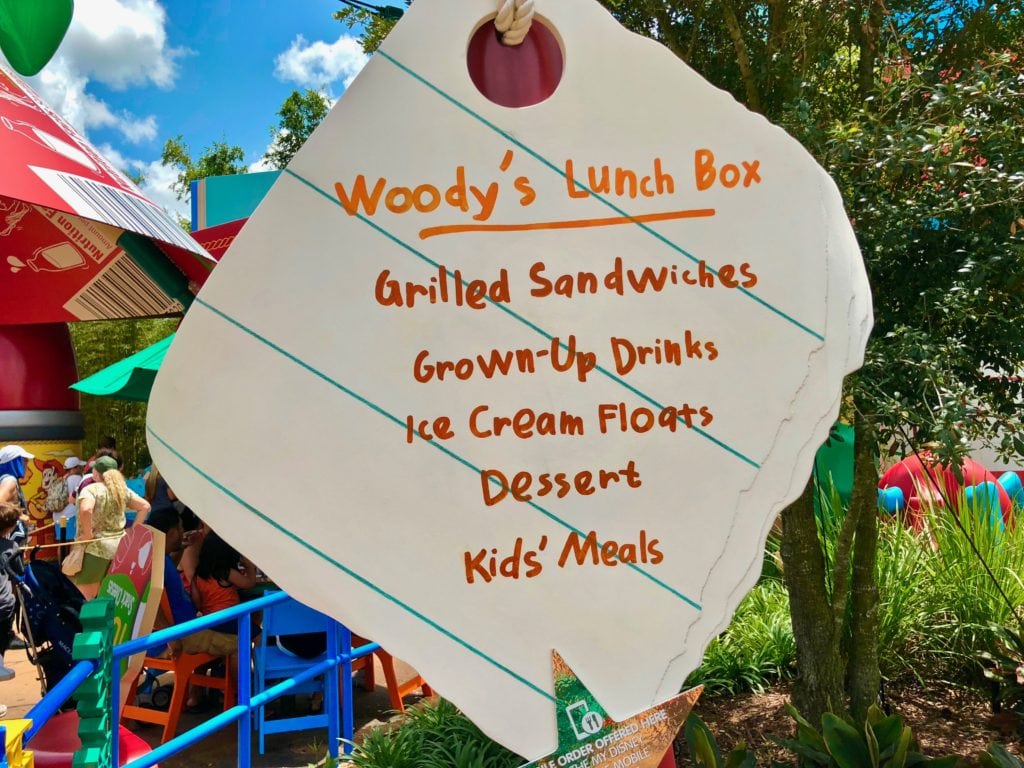 There’s really one real dining option in Toy Story Land called Woody’s Lunch Box. It serves breakfast, lunch and dinner. For being the only place that serves food food in Toy Story Land, it’s not that big. The line can get long which is why we suggest ordering via Mobile Ordering from the Walt Disney World app. You’ll skip the long line and being to just grab your food and go. Saving you time is just one of the benefits of reading our Toy Story Land Guide.

Their menu is actually pretty good. Breakfast is okay. We weren’t too impressed with it but lunch and dinner are great. Read more about our Woody’s Lunch Box experience in our guide here.

Outside of merchandise there are several carts that sell smaller food items such as drinks and ice cream, We didn’t see anything that was unique to Toy Story Land; just things that can be found throughout all the parks at Walt Disney World including Mickey ice cream sandwiches, Olaf frozen pops, cotton candy and more.

All your favorite Toy Story characters can been seen throughout the land at various locations including Woody, Buzz, Jessie and the Green Army Men. Guests can get the pictures taken with them. The Green Army Men are typically just roaming around the land and if you want a picture with them just ask. Thank you Toy Story Land Guide!

There are other characters in the land but mostly just seen as animatronics including Wheezy and Slinky. It’s hard to miss either once you’ve ridden Slinky Dog Dash.

Tickets to Toy Story Land are easy to get with Park Savers! We have the best discounted Disney World Tickets online. Tickets can save you upwards to $60 or more per ticket! All tickets come with free shipping or will call pick-up and are all FastPass+ enabled. Tickets can also be linked to MagicBands if you’re using them.

If this Toy Story Land Guide seems simple it’s because the land is simple. In fact, it’s a bit simpler than we thought it would be. It’s not big by any means and really consists of the two attractions and Woody’s Lunch Box. There are some nice big restrooms however. Toy Story Land will connect directly into Star Wars: Galaxy’s Edge when it opens in 2019 and will essentially create one big loop between the two lands. We’re really interested to see how they flow into each other. For now the old Animation Courtyard is closed as they construct this new entryway into Galaxy’s Edge.