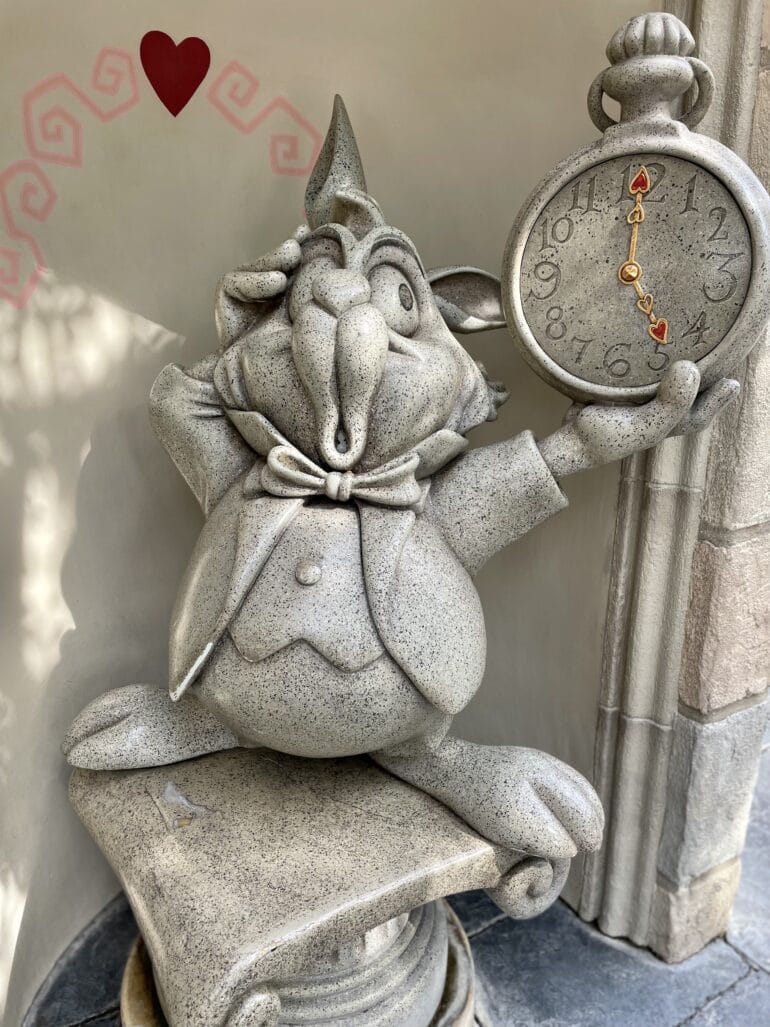 Wind along a curving path surrounded by surreal sights, dazzling colors and madcap music as you retrace the steps of Alice and her adventures in Wonderland. Glide through the White Rabbit’s House, Tulgey Wood and the Queen’s Garden. Encounter Wonderland locals The Mad Hatter, Tweedledee and Tweedledum, The Cheshire Cat and more. Down and down you go, until you come face-to-face with the Queen of Hearts, who cries “Off with their heads!” Can you escape in time to make it to the “unbirthday” party, where you’re the guest of honor? Curiouser and curiouser!

Alice in Wonderland is an older attraction at Disneyland and can only be found at Disneyland Park. It opened in 1958 and has sense has a remodel in 1984 and again in 2014. And because the attraction has been around for over 50 years, we think it’s time for a major overhaul.

There are sections of the attraction where you can see black curtains trying to hide things but it’s not working. We think Imagineers could really turn this into something fun but they haven’t yet. If your kids are itching to get on this attraction go there first thing in the morning. The lines only gets worse as the day goes on whereas if you catch it early you could be done in 5-6 minutes.

Be sure to take a look at our full 1-Day Disneyland Touring Plan for more ideas of how to move around the park.

The attraction is a dark ride so smaller kids may get scared. It has some sharp turns (not fast) and younger kids may not catch on to what’s happening. The ride can fit 2 guests in the front and 2-3 guests in the back.

Is the Alice in Wonderland ride still at Disneyland?

Yes. The attraction is still at Disneyland and is located on the edge of Fantasyland near Teacups. It has been updated several times throughout its run but the story remains the same.

How old is the Alice in Wonderland ride at Disneyland?

The attraction opened in 1958, just 3 years after Disneyland Park opened. In 2022 the attraction is turning 64 years old.

Can you meet Alice at Disneyland?

While this has nothing to do with the attraction per se, Alice can be met at Disneyland and is typically found around the Alice in Wonderland attraction in Fantasyland. She’s typically accompanied by the White Rabbit or Mad Hatter. Look around Pixie Hollow or between there and the Alice attraction.