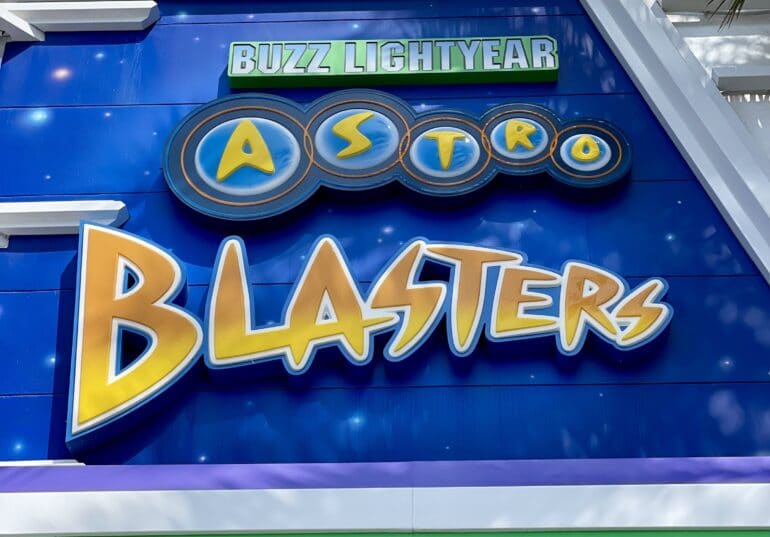 The Evil Emperor Zurg is stealing batteries to power a new weapon of destruction, and Buzz Lightyear—from the Disney and Pixar’s Toy Story movies—needs your help! Maneuver your XP-40 space cruiser through the shadowy Gamma Quadrant and beyond. Face down Zurg and his rampaging squad of robots and fire at will! Use the joystick to spin a full 360 degrees and blast glowing “Z” targets with your laser cannon to earn points.

Do you have what it takes to stop Zurg before it’s too late? The fate of the toy world is in your hands!

Buzz Lightyear Astro Blasters is a family-friendly attraction located in Tomorrowland across from Star Tours and the Astro Orbitor. The attraction has gained popularity over the years as one to ride over and over again to obtain a high score. Adults and children alike will both enjoy riding this attraction.

The queue is full of Buzz Lightyear and Star Command decor as well as a life-size Buzz Lightyear who commands you to your battle station when a threat from Zurg comes in. The attraction takes places in a moving vehicle that seats 1-2 guests. Each guest is given a laser blaster that’s used to hit various targets throughout the attraction. Your vehicle continually moves through different scenes and guests are able to move left or right by moving a joy stick.

Pulling the trigger will shot your laser and when it hits a targets bullseye the guest received points. The more points you get, the higher up the ranks you move in Star Command.

Different targets give more points. For example, Circle targets give the fewest points while Triangle targets give the most. If a target is lit up, it gives even more points. There are a few hidden targets as well including one on Zurg’s chest (on the first Zurg) that gives over 15,000 points per hit. Follow the line in his chest down to hit the target. You can hit the same target multiple times.

The best thing to help boost your score is to be stopped on the attraction temporarily as you can continue to hit targets while you’re stopped.

The attraction is somewhat slow moving and easy for most guests to ride.

How do you beat Buzz Lightyear Astro Blasters?

While there is no way to “beat” Buzz Lightyear Astro Blasters, shooters can compete for the top score which is won by shooting the most targets and collecting the most points. Strategy for this includes hitting targets that are either hidden or Triangle and Square targets which are worth more than Circles. In the end, everyone is a winner as you defeat Zurg.

What is Buzz Lightyear Astro Blasters in Disneyland?

The attraction is a shooter game where guests aim their laser blasters at targets and earn points as they shot them. Guests can shoot as much as they want, as fast as they want to score points. There is no limit to how many points a guest can earn. Top scores for Buzz Lightyear Astro Blasters are typically over 1,000,000 points.

Who voices Buzz in Astro Blasters?

Who else? Tim Allen who voices Buzz in the Toy Story films also does the voice of Buzz for the attraction.

It replaced Rocket Rods which was open from 1998 to 2000. The attraction debuted in 2000 after a make-over and the success of Toy Story which introduced us to the Buzz Lightyear character.