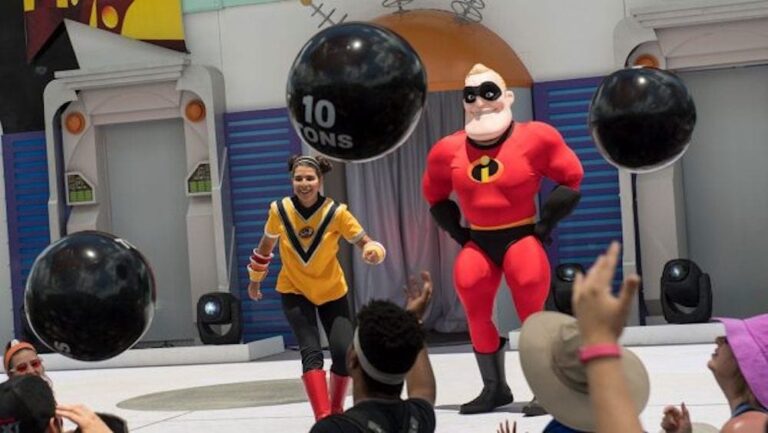 The new “Incredibles 2” film set domestic box office records in its opening weekend, including – in true superhero style – smashing the record for biggest animated debut of all time!

If you are “Incredibles 2” fans, you have to check out all the fun of the Incredible Tomorrowland Expo at Magic Kingdom® Park. This celebration takes place daily around the Rockettower Plaza area at the center of Tomorrowland, and includes must-snap photo ops, custom décor, “The Incredibles” character appearances, “super”-themed entertainment and more.

First up, Disney fans can’t stop talking about the debut of appearance of Edna Mode, who travels through the Expo riding atop her SuperMobile.

You can also catch a glimpse of members of the Super Super Fan Club who are roaming the Expo dressed in cosplay as their favorite new aspiring heroes: Brick, Reflux, Krushauer, Voyd and Screech.

“Moments in Super History” photo stops abound throughout Tomorrowland. Each one commemorates a unique heroic event in “super” history, such as the Incredibles’ battle with the OmniDroid.

At noon each day, the Jack-Jack Diaper Dash gives young Guests a chance to show off their “super” speed, in a race to crawl to their parental sidekicks. Guests can sign up to participate starting at 10:30 a.m. in front of Rockettower Plaza Stage.

Incredible Tomorrowland Expo is just one of many Incredible Summer offerings bringing fun to the Walt Disney World®Resort this summer.