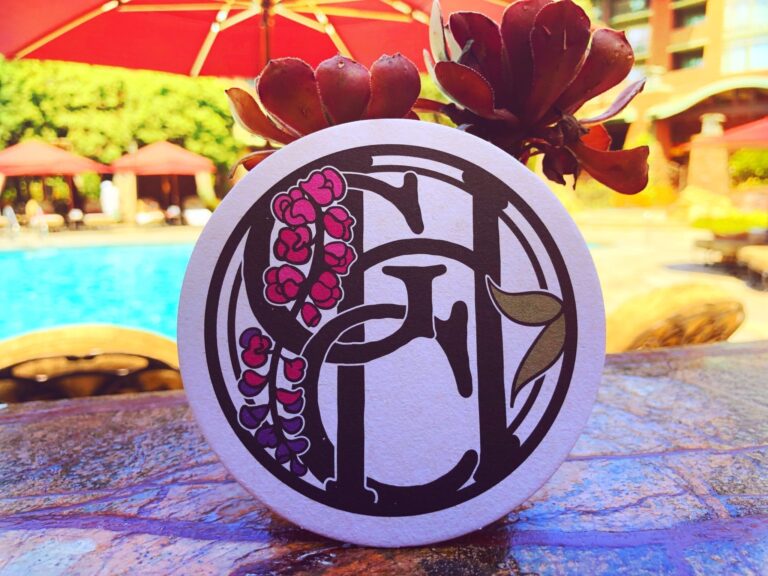 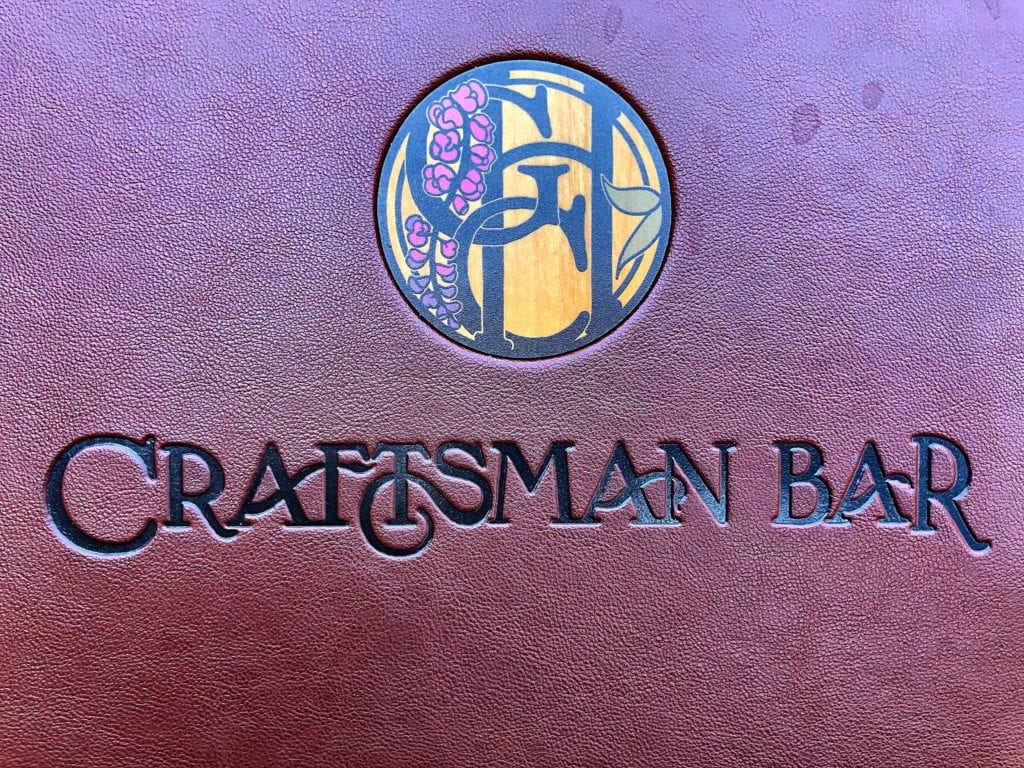 It’s the newest addition to Disney’s Grand Californian Hotel & Spa and is already making a big splash with foodies and loungers alike! On my last visit to Disneyland I made sure I made time to come visit this new bar and grill located at Disney’s Grand Californian Hotel & Spa pool area. As many of you may remember it was only a year or so ago that the pool itself underwent some major renovations including a complete resurfacing of the pools. Once this was done I thought Disney wouldn’t dare touch it again for many years. But I was wrong, and it’s the best wrong I’ve ever been.

When I first approached this new lounge I noticed that they had placed a gate up ahead of the actual lounge and that there was a Cast Member there handing out menus for guests to see. Beyond that I had to walk just a bit to get to the actual seating where two Cast Members greeted me and said I could sit where ever since I was alone and it wasn’t busy. 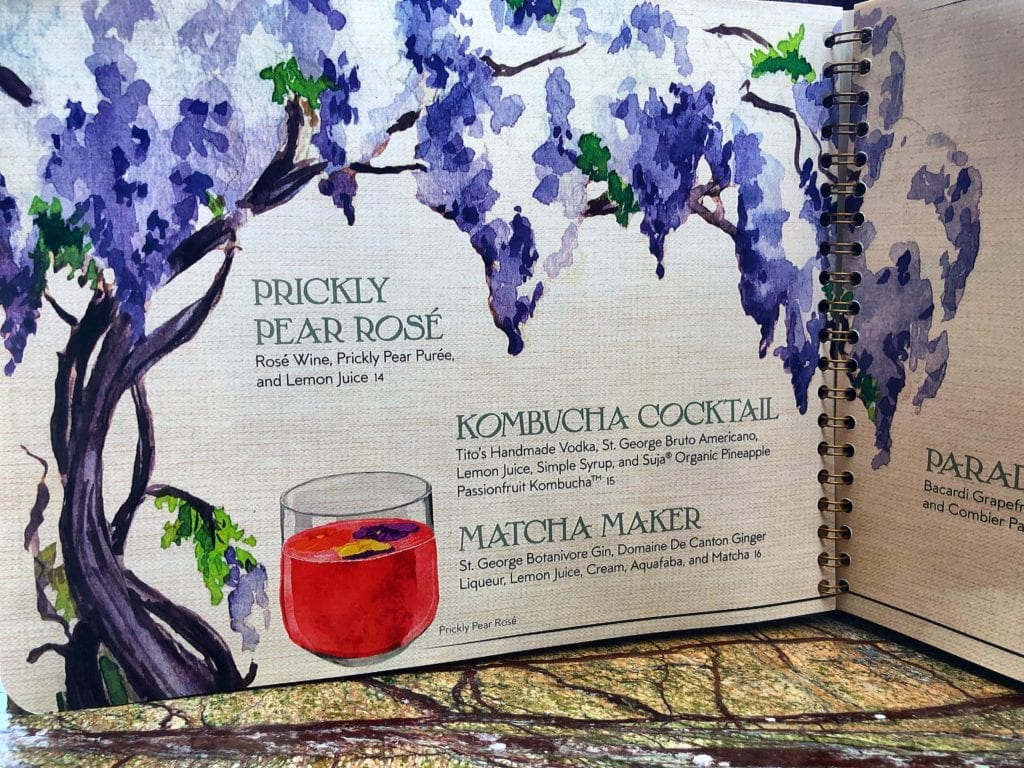 The service was very quick and before I knew it I had a drink and food menu in front of me. I had asked the first Cast Member what she recommended for food and she mentioned the Twice Cooked Beef Nachos. Right away I knew that was something I was going to get because I’m a pretty big fan of nachos.

The drink menu was very classy and had several great options. I ended up flipping to the non-alcoholic menu and picking the Citrus Grape Spritzer that had Sprite, Limeade and Powerade Grape in it. It was..interesting. I’ll probably try something else next time. 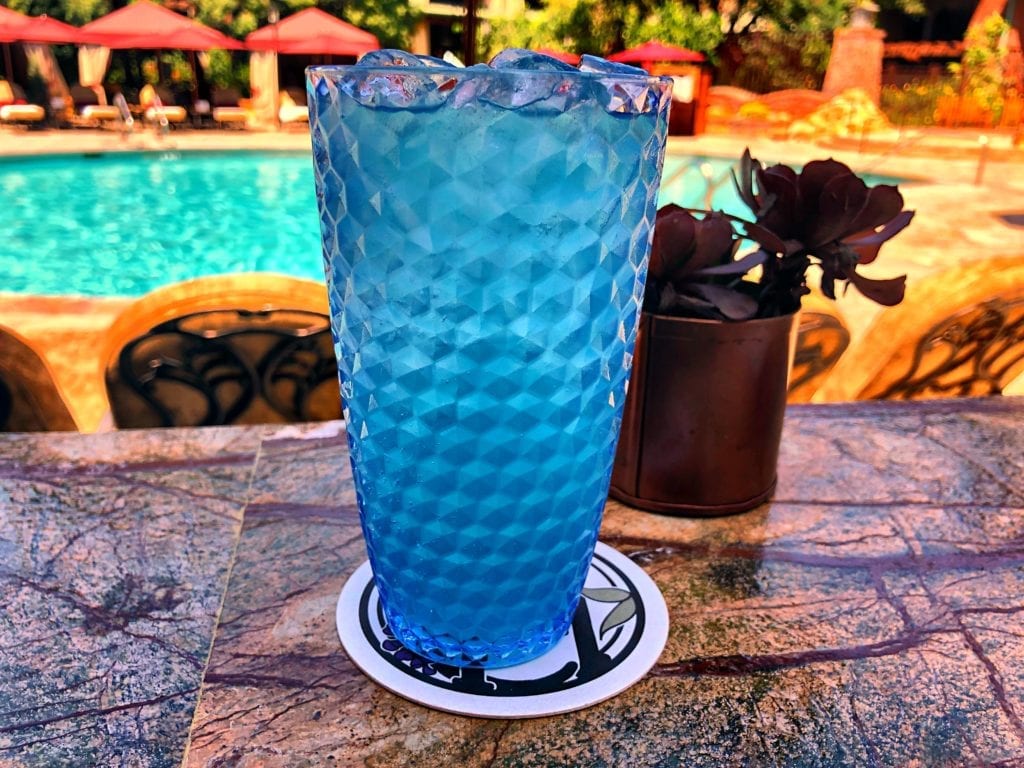 Scouring the food menu, there were several items I was interested in, obviously the nachos but also the Cali Sliders and Maine Lobster Quesadilla. I ended up settling on the nachos which I have no regrets about other than the fact that I should have shared them…with 3 other people! This dish is massive and easily feeds 4 adults or 2 really, really hungry adults. 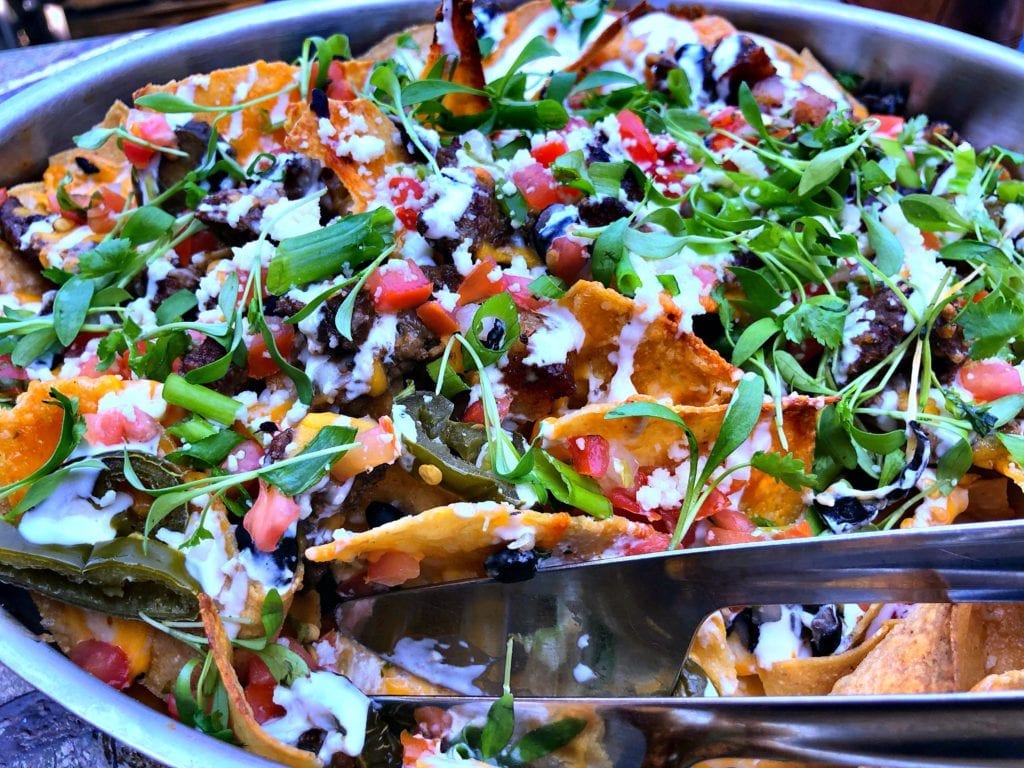 This plate is covered in deliciousness. The chips are crispy, fresh cut and amazing. The nachos are garnished with melted cheese, bacon, black beans, jalapeños, cilantro, queso fresco, guac and crema. The pan that this dish is served is massive (and very hot). It comes with tongs so you can each grab some and put them on your plate. For me personally, I just ate out of the pan.

You’ll have zero regrets and some leftovers most likely if you didn’t bring some companions. It was a fantastic dish!

I probably sat and enjoyed my food for a little over an hour before I called it quits and headed back into the parks. The nice thing about this lounge is that it’s right outside California Adventure Park, just a minutes walk away which allows easy access if you want to relax and take a break from the parks but also jump right back in when you’re ready. 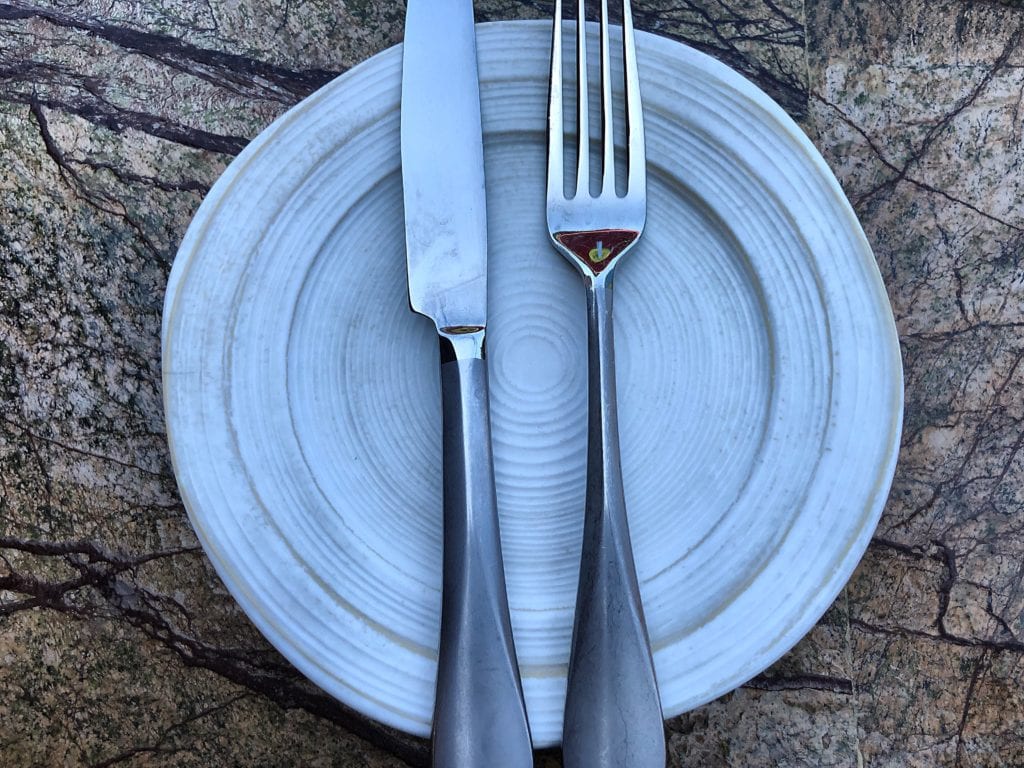 When I came back later that night with a friend we sat at the same area after being seated at a table near the band. While it’s fun to have live music, we could barely hear each other in conversation. EVen after moving, because they play the music over speakers we had a hard time. It’s the only downside to this place. Truthfully they just need to turn it down a bit.

It doesn’t get any better than this. I personally love a great outdoor lounge like Trader Sam’s and this hits it right on. There is no inside seating but not to fear because the majority of the tables are covered by shade. There are some areas that get hit by the sun depending on the time of day it is. I visited around noon and was able to sit at a bar overlooking the pools and found shade there though parts of the bar were in the sun.

The lower tables that are at pool level are almost always going to be in the sun during lunch-early dinner time. During the late fall to early spring this shouldn’t be too bad if you show up around dinner time as the hotel itself should be blocking the sun at that point.

The Cast Members here are fantastic and assuming it’s not jam-packed you should be able to request seating where you’d like. You can of course head right over to the bar if you’re mostly interested in a drink. 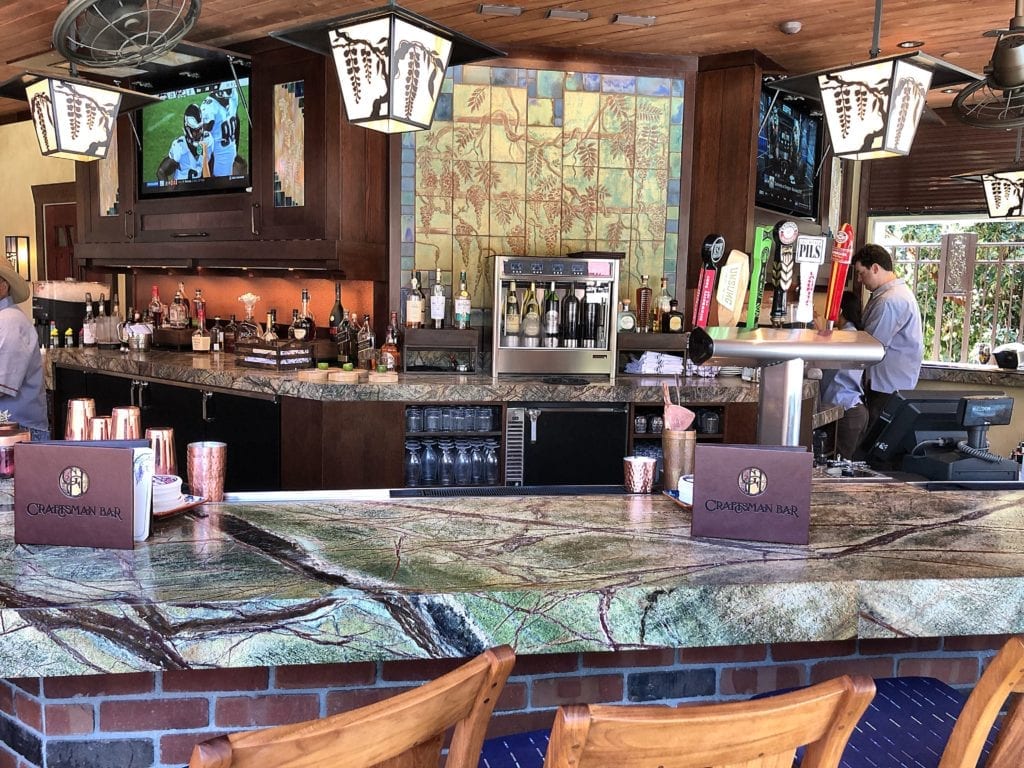 Like Trader Sam’s, the GCH Craftsman Bar and Grill has live music. Not only do they play at night but during the day as well, playing classic songs and of course some Disney medlies. They will also take requests as long as they are appropriate.

While this new lounge is right next to the pool the two areas didn’t seem to clash with each other. I never felt that the guests at the pool were so loud and annoying that you couldn’t have a conversation. Pool guests do have easy access to the lounge though and I noticed that some would occasionally come over and enjoy a drink.

Depending one when you visit you may want to wear something a bit warmer in the evening times as this place is very much shaded at that point and could get a bit cold being near the pools. During the day time you’ll have the option to sit in the sun or shade depending on the temperature.

The menu for GCH Craftsman Bar and Grill is actually pretty extensive for a lounge and included some really great dishes. As I mentioned before, the Twice-baked Beef Nachos are a must-try. I would also highly recommend the Cali Sliders and the Black Angus Flat Iron Steak Salad. Although I haven’t tried everything on the menu I don’t think you can go wrong. Everything is freshly prepared, there’s no warmer that the food comes out of.

I also had the chance to try the Maine Lobster Quesadilla and can tell you that you also must try it if you love lobster. It’s equally as good as the lobster nachos at Lamplight Lounge. Very tender and large chunks of lobster are folded into a crisp quesadilla served with cheeses, onions, a corn relish and spicy mayo. 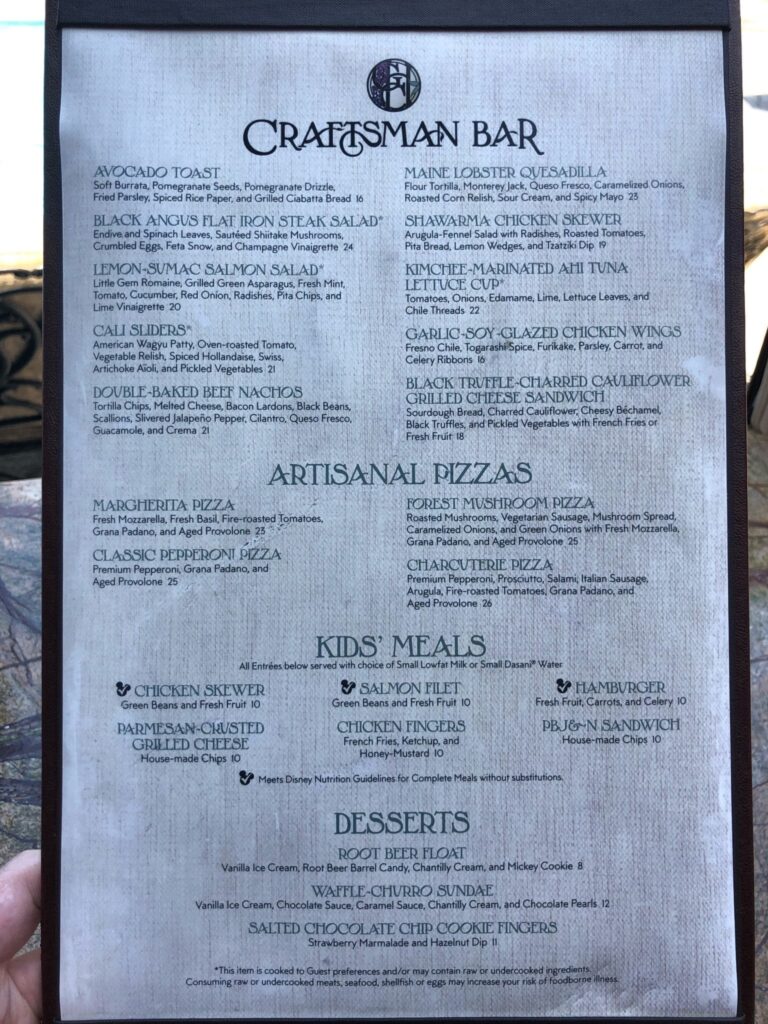 Even the kids menu had some fantastic foods on it including the chicken tenders with crinkle cut fries. Both were freshly baked and came out amazing. My daughter kept saying they were her favorite chicken strips!

Of course if you look at the dessert menu you’ll also see that there are some amazing choices here too. The waffle-churro sundae is a flash-back to Halloween 2018 in Disneyland Park when the Golden Horseshoe Restaurant served this baby and it was very popular and very delicious. It’s pretty much the same dessert and it highly recommended by myself.

If you’re a classic dessert lover then try the Root Beer Float. It’s strong and very flavorful. The ice cream is premium and soft and you’ll end up drinking this whole thing after some of the ice cream has melted.

Take time out of your day and come enjoy this place! It’s completely worth it, especially if you’re staying at the hotel or you’re in California Adventure Park. Even if you’re not hungry but you want to enjoy a relaxing environment with a drink, come check this place out.