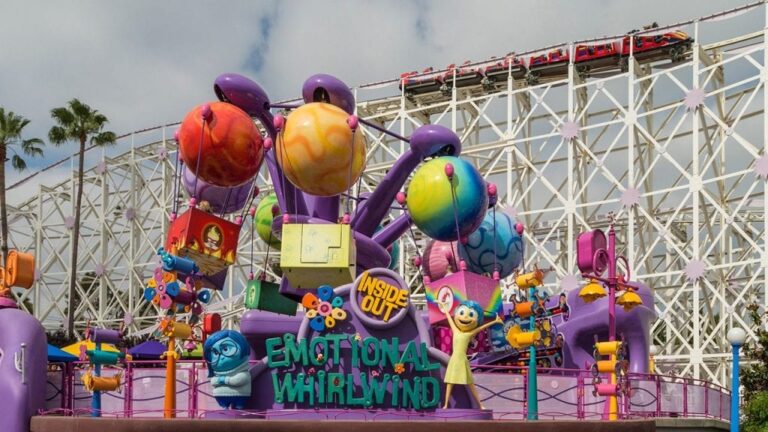 Inspired by the hit Disney and Pixar film “Inside Out,” Emotional Whirlwind takes you on a sense-ational spin while aboard one of eight Memory Movers. Help Riley’s Emotions—Joy, Sadness, Anger, Disgust and Fear—sort through memories being collected.

Check out the video below!

Emotional Whirlwind is located in the Inside Out Headquarters neighborhood of Pixar Pier, which recently celebrated its one-year anniversary! The reimagined land shares the stories and characters of Pixar films with exciting attractions, themed neighborhoods and fun eateries. Get your discounted tickets to the Disneyland Resort to enjoy this all new attraction! 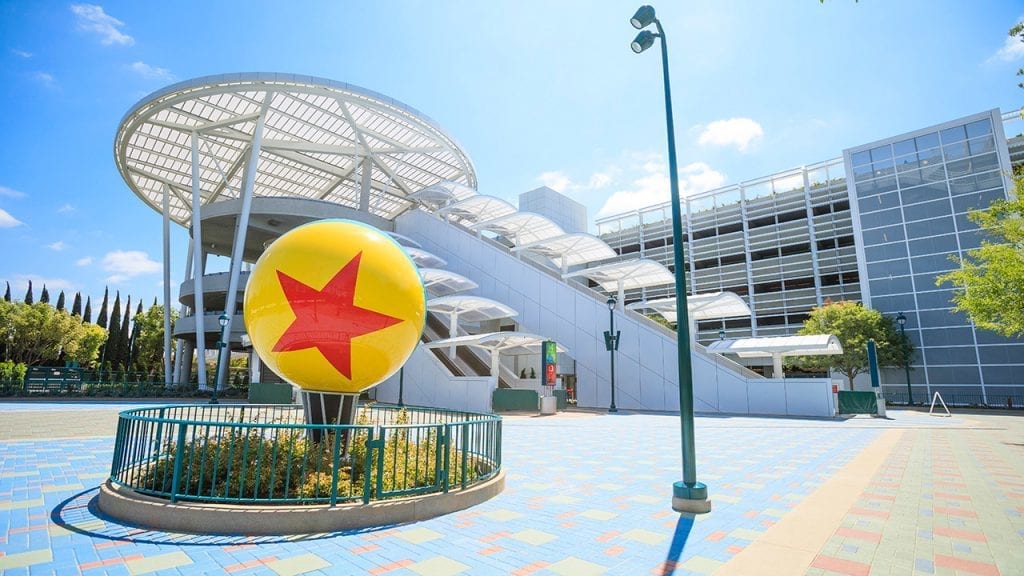 Last year, Disney announced plans to build another parking structure adjacent to Mickey & Friends. The new structure, called Pixar Pals, features familiar friends from Disney and Pixar films such as “Coco,” “Monsters, Inc.” and “Inside Out.”

Today, we’re excited to announce that Pixar Pals will be open for Guest parking beginning June 30 – months ahead of schedule!

Pixar Pals will add more than 5,000 parking spaces to the west side of the Disneyland® Resort. With additional entry lanes and a new electronic inventory system, the new parking structure will expedite Guest parking and reduce traffic around the resort.

Additionally, we began installing the Magic Way Pedestrian Bridge, which is set to be completed by mid-September. This new bridge will connect visitors from Pixar Pals—over Magic Way—to the rest of the resort, allowing Guests the option to stroll through the Downtown Disney® District to the theme parks’ Main Entrance. By eliminating the foot traffic crossing the street at Disneyland Drive and Magic Way, the new bridge provides convenience, enhances safety, and improves traffic circulation.

These parking and transportation enhancements—along with other existing parking options throughout the resort area—are designed to improve parking and traffic flow to continue to enhance the overall guest experience at the Disneyland Resort.

Last Chance for a ‘Soundsational’ Summer 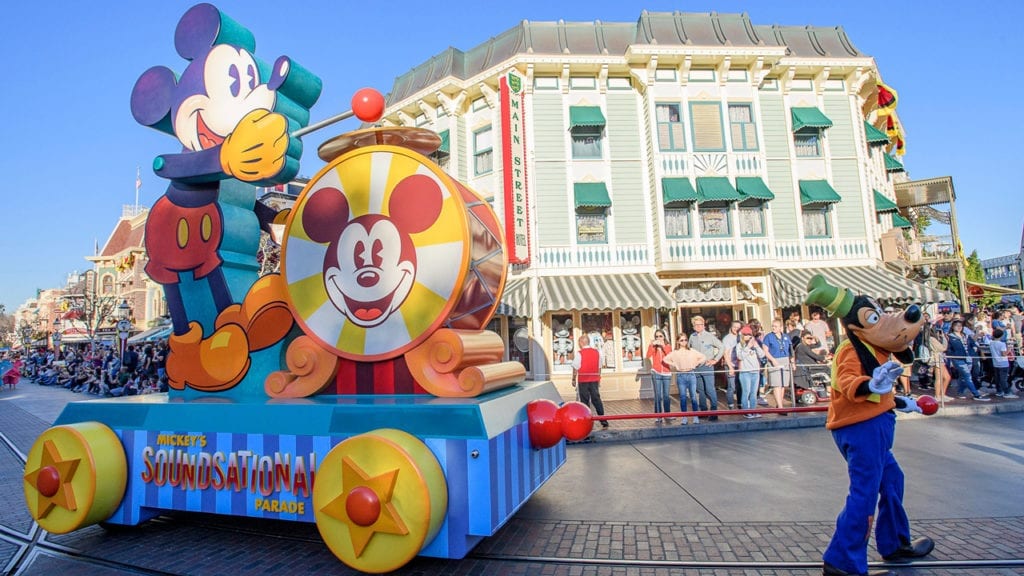 If you’re are heading to the Disneyland® Resort this summer, the beloved “Mickey’s Soundsational Parade” is livening up Disneyland Park, now through July 17.

This popular parade puts music in motion with Disney characters, performers and two new parade floats, which debuted earlier this year. Mickey starts the party in a larger-than-life opening as he and his drum corps kick off a lively, musical procession with Disney characters. Next, Chip ‘n’ Dale arrive with a giant new celebration cake, followed by Goofy pulling another new float, inspired by the classic and nostalgic Mickey pull toys.

Watch the video of this vibrant, eye-catching parade: 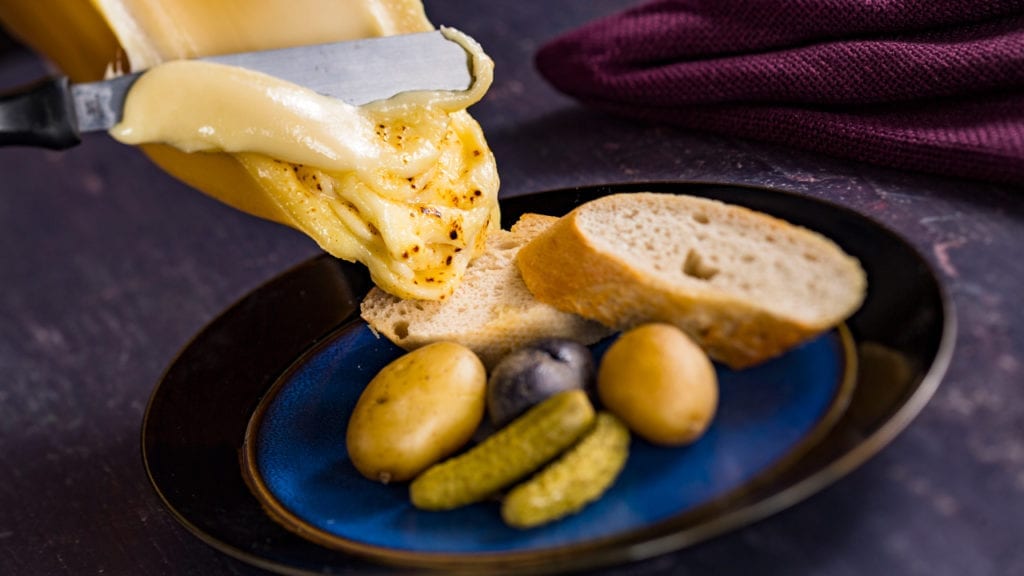 Counting down to Aug. 29 and the launch of the 24th Epcot® International Food & Wine Festival, we have more exciting news about sips, bites and entertainment on tap for this longer-than-ever, 87-day event!

Starting with sips, you can check out the new Appleseed Orchard Marketplace which will offer a unique variety of craft brews, ciders, wines and lite bites. This new marketplace will be located next to Le Cellier Steakhouse in World Showcase. As we shared earlier, the “O Canada!” film will be refreshed with new footage and a projection-system upgrade for a visually-enhanced experience. While this behind-the-scenes work is in progress, the theater will transform to an all-new festival destination offering a cool respite.

At the Appleseed Orchard Marketplace, you will be able to pair apple-inspired beers, ciders and cocktails like the Apple Blossom Sky while nibbling on Charcuterie and Cheese. Brews, ciders and wines will be offered individually or as flights. And the kid-friendly Frozen Apple Pie drink will inspire a chill stroll to the next stop.

More sweet and savory treats will debut at the brand-new The Alps Marketplace, where you can conjure a snow-capped setting while dipping into their dish of Warm Raclette Swiss Cheese with Baby Potatoes, Cornichons and Baguette, or Venison Stew with Crushed Potatoes paired with a refreshing Frozen Rosé.

Also new this year, families can enjoy Emile’s Fromage Montage where they can sample a variety of delicious cheeses served in inventive ways. You can purchase any five cheese dishes from the official Global Marketplaces listed in the Festival Passport and collect a stamp for each cheese dish purchased. Once you’ve collected all five stamps, you can bring the stamped Festival Passport to Shimmering Sips for a complimentary specialty cheesecake unique to the Epcot International Food & Wine Festival.

And you can pair football mania with festival fun, no grills or picnic baskets required. Bookings start today for the new Tailgate Tasting hosted by ESPN’s Monday Night Football, available select Sundays starting Sept. 8 – Nov. 17. The 45-minute program will pair gridiron grub with a beverage tasting inspired by the cities of pro teams playing each Monday night. Even better, you will learn how to prepare the dishes for their next tailgate party!

We told you previously about the anticipated week-long expansion of the Disney du Jour Dance Party, with weekend Radio Disney artist appearances. Sundays through Thursdays, a DJ will lead the interactive fun. Fridays and Saturdays will feature performances by Radio Disney and Radio Disney Country artists and appearances from a few of your favorite Disney characters. You can catch headliners Meg Donnelly (“With U,” Disney Channel’s Zombies) Aug. 30-31, Jenna Raine (“A Letter to Me”) Sept. 13-14, Sky Katz (“Like This,” Disney Channel’s Raven’s Home) Oct. 11-12 and JAGMAC (“Like a Band”) Oct. 18-19 – they’ll want to dance the night away with family and friends!

And more NEW acts are joining the roster for the festival’s longest-ever Eat to the Beat Concert Series, returning this year from Aug. 29 – Nov. 19. Be sure to purchase your discounted tickets to this yearly event by visiting our ticket center online.