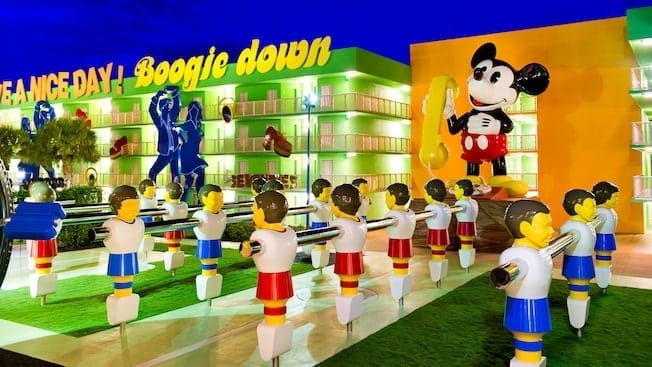 The Pop Century Hotel is a Value Resort at Walt Disney World!

Pop Century Hotel – Experience the unforgettable fads of the 1950s through the 1990s all over again. From yo-yos and Play-Doh® to Rubik’s Cube® and rollerblades, this Resort hotel salutes the timeless fashions, catch phrases, toys and dances that captivated the world through the decades.

We’ve stayed at Pop Century twice before in our travels and would rank it our 2nd favorite Value Resort at Walt Disney World. The entire resort is themed around American Pop Culture covering from the 50’s – 90’s called the Classic Years. The resort was originally supposed to have two sections, the Classic Years and the Legendary Years.

However, during the construction of the resort 9-11 happened and tourism to Disney World scaled back. Because of this Disney decided to only continue with one section of the resort and left the other half (Legendary Years) uncompleted for several years. Part of the construction was to include a bridge between the two called the Generation Gap Bridge. This too was scrapped and Pop Century opened in 2003 with 2880 rooms.

So what happened with the unfinished section of Pop Century?! It was eventually finished into Walt Disney World’s fifth Value Resort, Art of Animation! The resort sits directly across the lake from the Pop Century Hotel and features 1,120 suites themed after some of your favorite Disney films.

As mentioned, this hotel has 2,880 rooms so it’s quite big and typically pretty busy. The best halls to stay in are the 60’s which sit right behind the lobby and between the main pool. These two halls are also the closest to the one and only bus stop in front of the lobby. The 50’s and 80’s halls are the next best room locations as both have their own pools as well as proximity to the lobby/bus station. The 90’s hall would be the third best place to stay. We always recommend getting a preferred room so that you can be as close to the lobby and bus stop as possible.

The size of the standard room is fairly small so don’t plan on cramming more than 4 to a room. The beds are only double size and most of them have two. There are also king bed rooms and 1 queen with pull-out sofa rooms as well. Request these BEFORE you arrive or there probably won’t be any left.

All the pools are moderate in size, the weirdest one may be the computer pool but in reality it’s a pool and it does its job. The main pool, Hippy Dippy, is very plain. No slide or anything special except there is a kiddie pool and a bar by it. Despite what you may hear guests of Pop Century can use the pool at Art of Animation across the way. We like those pools better anyway.

The dining at Pop Century Hotel is nothing special at all. It’s your basic seven station grab and go food like you’d find at a cheap cafeteria. If you want some better tasting food head over to Art of Animation. They’re serving up some much better eats over there and it’s open to anyone. We did this for breakfast mostly and had zero regrets even though it’s a small walk.

Over the resort is great for guests who know they’ll spend most of their day in the parks and not their room.

We recommend Undercover Tourist for the best price on this hotel.