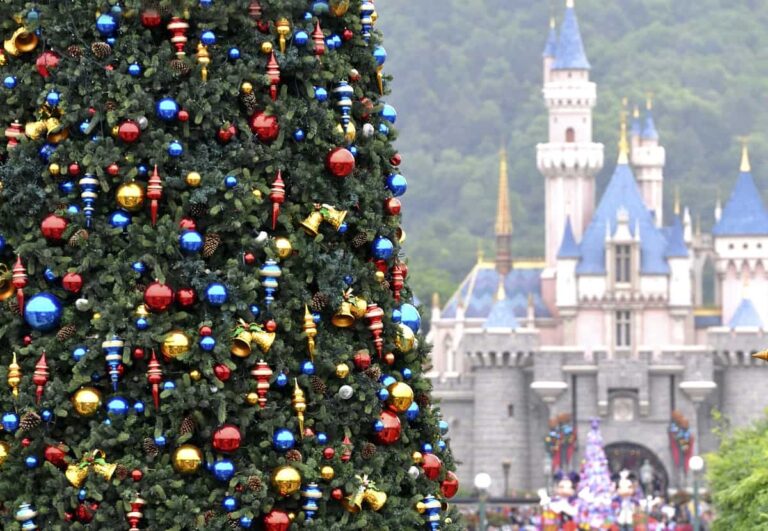 When Does Disneyland Decorate for Christmas?

Is there anything more magical than visiting the Happiest Place On Earth during the Christmas season? During Christmas time, Disneyland transforms into a  glowing wonderland of colorful lights and cast members.

Disneyland decorates for Christmas at the beginning of November and stays festive until early January, so guests have plenty of time to enjoy the holiday festivities. During the holidays, here’s a lot to see, and even more to do at Disneyland, with holiday parades, specially themed attractions, fireworks, festivals, food, and much more.

Due to COVID-19, Disney parks were closed for a time, but are now reopened with certain conditions. All guests age 2 and up are now required to wear a mask inside the park. Also to manage the number of people in each theme park, guests are required to use Disney’s Park Pass Reservation System to reserve entry to specific parks at Disneyland. Visit here for more details.

Overall Disneyland in Anaheim, California is widely regarded as the most extravagantly decorated of all the US Disney theme parks. Not only is the park filled with Christmas decorations but there are also plenty of attractions that draw in seasonal visitors.

The Haunted Mansion Holiday is essentially a marriage between two holidays – Halloween and Christmas. The tradition of this holiday attraction has been around since October of 2001. Each year around Halloween, Disney takes its famous Haunted Mansion and turns it into a Nightmare Before Christmas-inspired attraction, based on the film by Tim Burton.

This Disneyland attraction is great for both holidays since Halloween and Christmas are so close to each other. When you arrive at Disneyland, you’ll see Jack Skellington assuming the role of Sandy Claws in his misguided, yet earnest, attempt to present a twisted version of Christmas festivities.

His efforts take the form of a ‘takeover’ of the Haunted Mansion, which features a giant cake in the ballroom of the mansion, and this display is generally considered the highlight of the Halloween/Christmas attraction. The Haunted Mansion Holiday is one of the most popular holiday stops among all  Disneyland guests.

You may want to go early in the morning, to visit the Haunted Mansion Holiday since it draws a lot of visitors especially between the 7-8 pm.

During the holiday season, this classic “Children of the World” attraction is also transformed. The theme of the attraction becomes  ‘happy holidays, peace on earth.’. Pretty much everything in the attraction is changed, from the large props to the classic title song.

When you enter the attraction, you will get to experience three distinct, immersive Christmas aromas from around the world. In South America, you’ll smell the classic cinnamon scent common there during the holidays. In Asia, be prepared to smell the stunning fragrance of the cherry blossom tree, while the South Seas take you to the tropics with a coconut scent, which is accompanied by hundreds of sparkly bubbles floating around you. These scents are combined with the peppermint candy and pine smells that are common to the European Christmas scene.

The most noticeable change to the “It’s a Small World” attraction is the lighting that is added to its exterior. It’s impossible to describe with words just how bright, colorful, and beautiful the attraction lights are. This holiday attraction is certainly something that you need to experience in person.

As a reminder,  the lights are one of the attraction’s main draws so the lines are going to be much longer at night.

The Christmas Fantasy Parade consists of about 12 floats, 6 units, and more than 100 performers. In terms of entertainment, this is likely one of the largest productions of the year, whether you’re at Disneyland California or Walt Disney World.

From reindeer, princesses, and the characters from the Fab Five, to Santa Claus – everything is here. It’s important to note that the parade has been around for more than 20 years, and you can tell.

The crowds that gather for this parade can be quite large, especially over the weekend, so try to see it during the week if you’re able.

The Christmas Fantasy Parade is generally shown twice a day, but it’s not easy to choose which one you should see. If you visit the parade that takes place during the day, you’ll be able to avoid the locals that rush to it after work. But, the day parade is shown during the afternoon, when the sun will be baking on you, and it’s quite a long parade. The second showing has an advantage if you’re trying to avoid the sun, and the lights make it more enjoyable.

The Believe in Holiday Magic! Fireworks consists of a few instrumental renditions of many traditional Christmas tunes after the song “Can You Remember?”It also has lighting and pyrotechnical effects coming from Sleeping Beauty’s Castle to match the music’s tempo. Like all of Disneyland’s firework shows, this one can be canceled if there are higher elevation winds.

Disneyland has introduced an alternate version of this show if the wind is too strong which features fireworks from a projector rather than live fireworks. Luckily, If the original version of the show can’t run, then the new one will.

Since this attraction is canceled so frequently, you might not want to camp out all day to see the fireworks. Main Street also becomes quite crowded in the hours leading up to the show’s start. So if you want to avoid being squished between other people, then you should watch the fireworks from the area near the “It’s a Small World’ holiday, where you’ll be able to see most of the pyrotechnical effects.

There’s so much more to Disneyland during Christmas than the few attractions we’ve mentioned here. It goes beyond the attractions, the lights, and the fireworks. It’s more about being in a magical place surrounded by people who want to experience the magic just as much as you do. If you ever get the chance, be sure to visit Disneyland during Christmas time – you’ll thank yourself later. Get your tickets here.