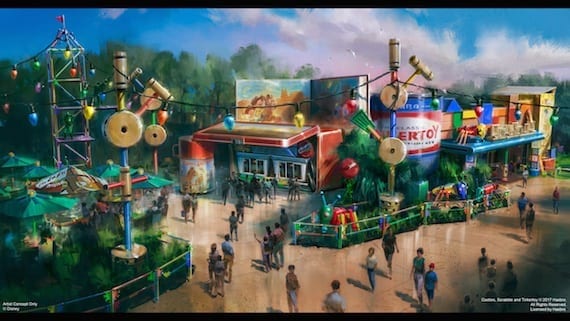 Woody’s Lunch Box – The newest addition to Toy Story Land and the first announced dining location for the new land opening in 2018.

When Toy Story Land opens in Summer 2018 at Disney’s Hollywood Studios®, you will shrink to the size of a toy and explore all of the fun (and toys!) Andy has constructed in his backyard. This story continues at Woody’s Lunch Box, where Andy has used his lunch box and thermos to create a walk-up quick-service window that will serve up tasty meals and old-fashioned soda floats. In the rendering above, you can see that Woody’s Lunch Box – like the rest of Toy Story Land – has been adorably strewn about with some of Andy’s favorite toys and items from his lunch. You can even spot a green army man on a nearby lookout tower, keeping watch for Andy’s return.

Toy Story Land will be located right off Pixar Place at Disney’s Hollywood Studios and will feature several new attractions and places to eat including Woody’s Lunch Box and:

Slinky Dog Dash: Andy’s assembled his awesome coaster kit… and Slinky Dog is ready to take you for a wild ride on a crazy coaster—one that gives you a glimpse of all that Toy Story Land has to offer. Come along as Slinky Dog bends and twists his coils around curves, hills, bridges and drops. Make no mistake, this is one wacky attraction… and fun for the entire family!

Alien Swirling Saucers: The Aliens have powered up their flying saucers to take you on a dizzying ride through space! Hang on tight as your toy rocket ride takes off, all while space electronica provides an out-of-this-world beat. And if you’re really lucky, you might just get “chosen” by the claw. Oooooo!

So far only one food destination, Woody’s Lunch Box, has been announced. We’re expecting to see several cart areas and maybe even a sit-down restaurant in the future. What theme would you like to see?

The Walt Disney World® Resort will partner with Mini Babybel to bring this location to life. Stay tuned for more information on Woody’s Lunch Box – and the menu of delicious items it will serve up – in the coming months.