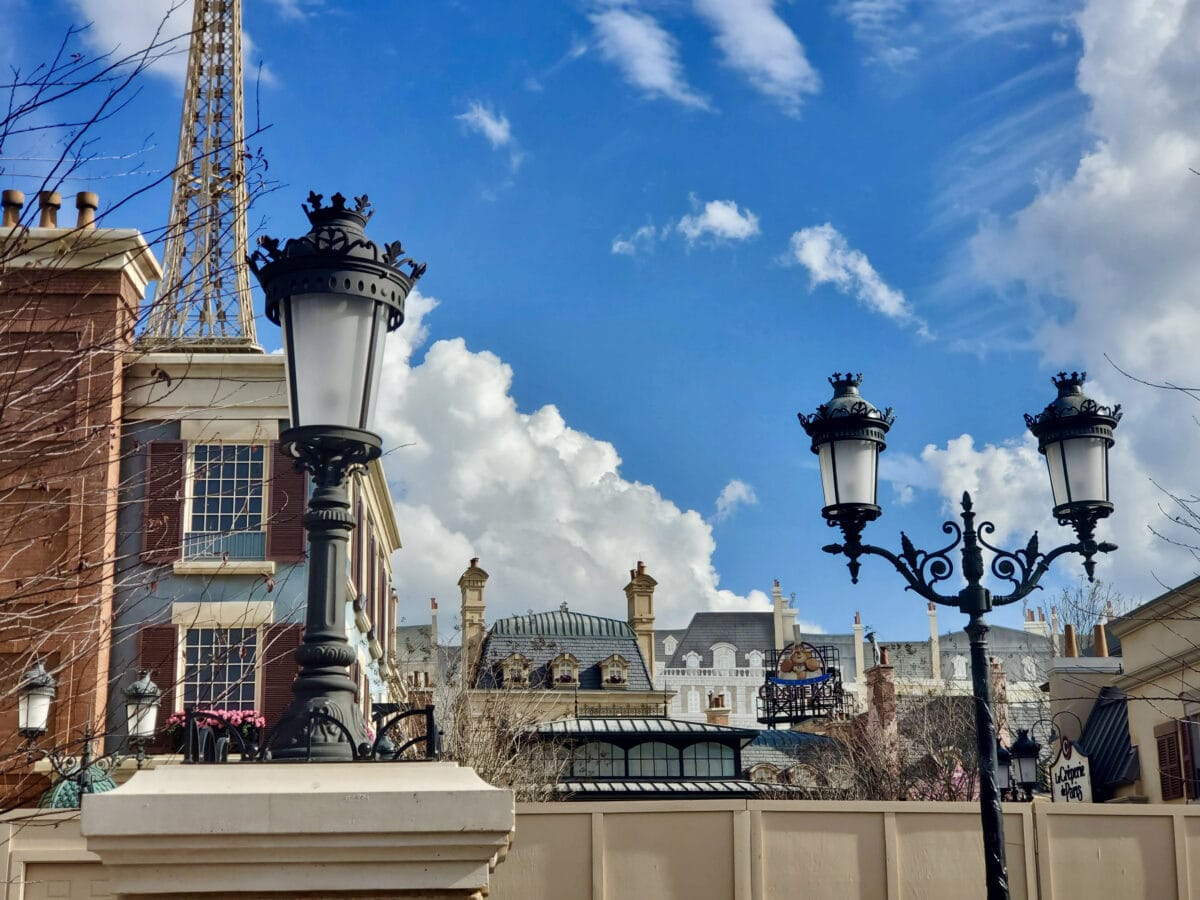 Remy’s Ratatouille Adventure attraction is a new ride coming to Disney World’s Epcot theme park. This post is going to cover everything you will need to know about it including when it opens, what to expect from it, the changes made at Epcot, who can ride and much more. Most importantly we will cover how to ride this new attraction once it opens in 2021.

Keep in mind that this post may change in form as new details emerge and after the opening of the attraction. We plan to be there for a Cast Preview or opening day of the ride so be sure to follow us on Instagram or Facebook for details that day. For now, keep reading to learn all about Remy’s Ratatouille Adventure! 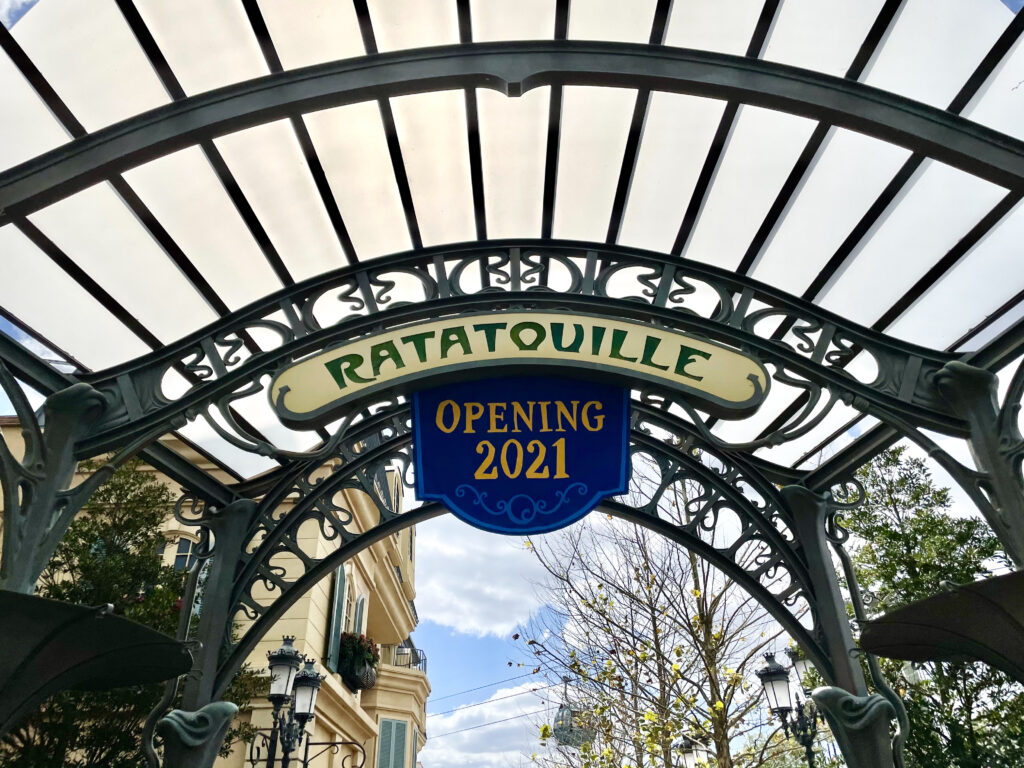 When does Remy’s Ratatouille Adventure open?

Remy’s Ratatouille Adventure will open October 1st, 2021 at Disney’s France Pavilion in the Epcot Theme Park. Disney made the announcement in early 2021 as guests anticipated it would be opening sometime in the 2nd quarter of the year. However, Disney has decided to hold off and open it on their 50th anniversary.

There’s a good chance the ride will go through several weeks of testing and riding with Cast Member previews and possible Annual Passholder Previews as well. While these aren’t guaranteed, Disney typically does this with all their new attractions and shows. If you are an AP holder, be sure to check your email for possibile invites.

Where is the new attraction located?

Disney has done all they can to make the attraction authentic so they have built it in the France Pavilion at World Showcase. The pavilion itself had lots of expandable land to the side and behind which is where the entrance to the attraction and the ride itself are located.

Currently the new walkway and part of the queue is open for guests to stroll down. It features a brand new crepe restaurant, La Crêperie de Paris which will open in 2021 and bathrooms for guests in the area. It also offers great views of  Crescent Lake, the Friendship boats and the Disney Skyliner. Guests who ride the Skyliner from or to Epcot will get a great view of the new attraction. 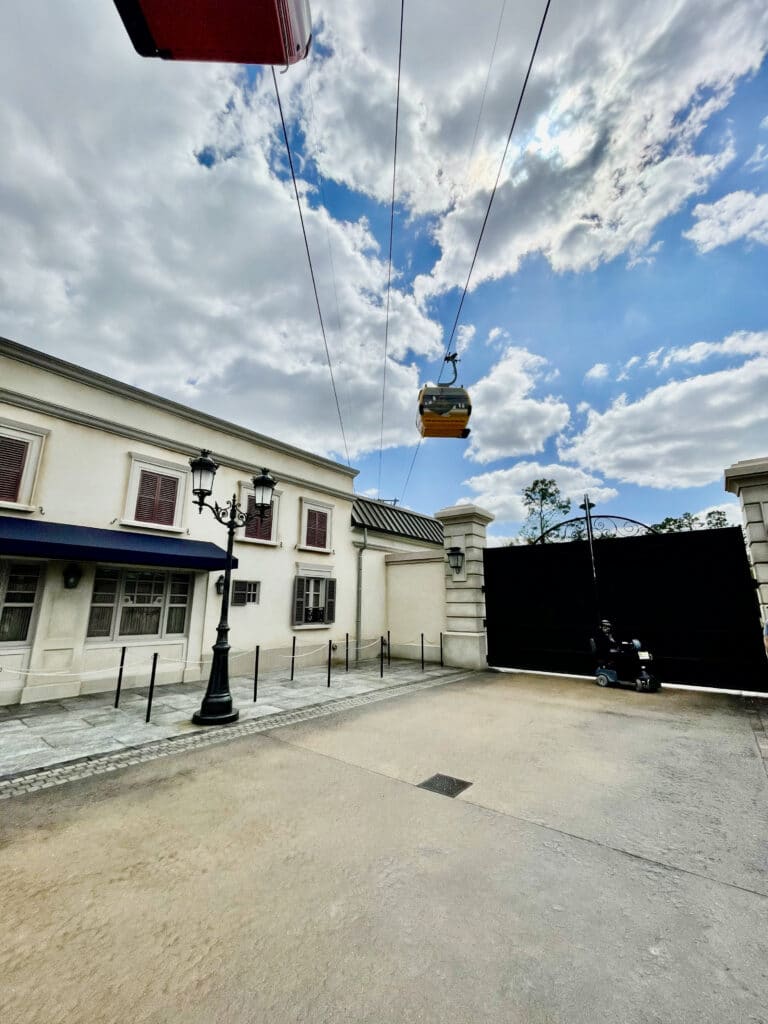 Who Can Ride Remy’s Ratatouille Adventure?

This attraction was designed for guests of all ages to ride with no height requirements. The ride vehicles are very similar to what you would find at Alice in Wonderland or Winnie the Pooh: a simple seat with a lap bar that holds 2-3 guests. This means that the whole family or party can enjoy the attraction without needing to be a certain height. Of course Disney always posts warning outside stating who shouldn’t ride and they should be followed.

Disney has been moving to what’s called “trackless” attractions where ride vehicles don’t sit on coaster bars or as physically connected to anything. So how does the vehicle move? Very large magnets. One is on the bottom of the ride vehicle and the other underneath the floor of the attraction. You can’t see them but they are there and they can be programed to move any which way they please. Side to side, back to front, diagonal, in a circle. You get the point. It really opens up a lot of possibilities for attractions.

Current attractions that use this system are Star Wars: Rise of the Resistance, Lugi’s Rolickin’ Roadsters and Mickey and Minnie’s Runaway Railway.

Once guests are seated in their ride vehicle (which looks like a rat) they begin their adventure which they will experience from the viewpoint or size of a rat. Guests will join Remy as he tries to make a dish in the restaurant but keeps running into trouble. The attraction is a combination of physical moving through big rooms and screens which makes it a 4-D attraction.

There is quick movement, spinning and of course screen time. There are lots of similar attractions at the Universal Orlando Resort like this including Transformers the Ride, Spiderman and Escape from Gringotts. 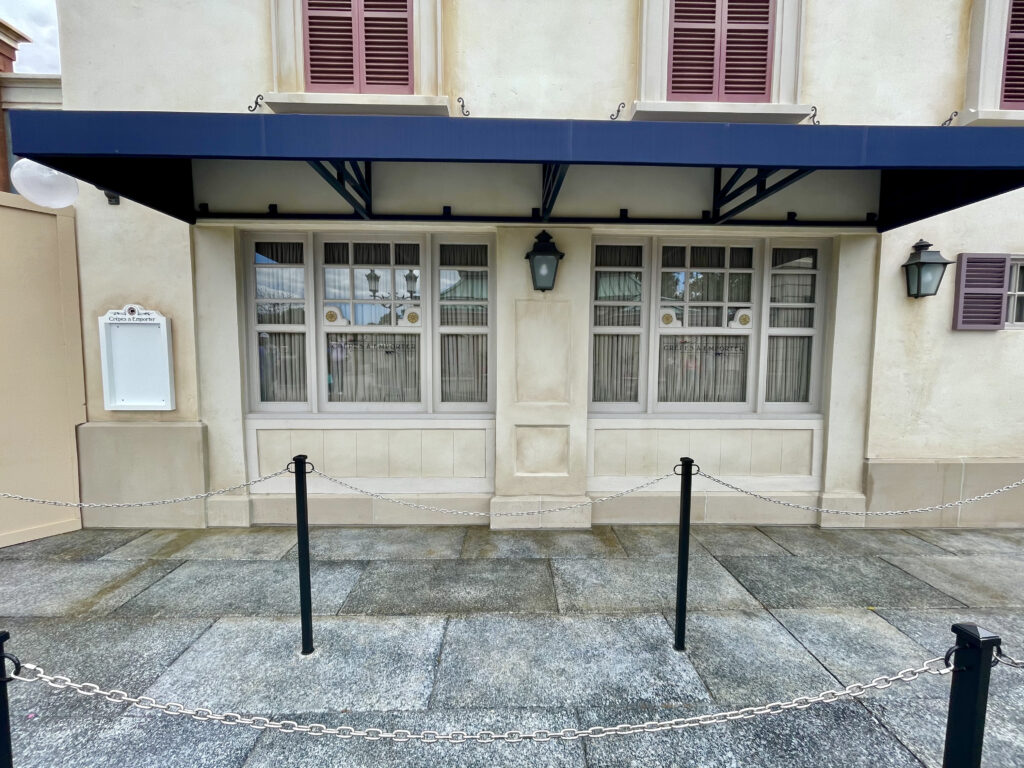 Is it exactly the same as the ride at Disneyland Paris?

Epcot’s version is expected to be identical to the one found at Disneyland Paris. The only changes will be language which will go from French to English (though some may stay French for staying true to the film). Ratatouille: L’Aventure Totalement Toquée de Rémy is found at Walt Disney Studios Park.

HOW TO RIDE REMY’S RATATOUILLE ADVENTURE

Like all new attractions, there’s a decent chance a lot of guests will show up to ride it. Pile this on top of the fact that October 1st, 2021 is the start of Disney World’s 50th Anniversary and we’ll venture to say that the parks are going to be busy, particularly Epcot.

However, there are several scenarios that can play out here, all of which we will go over now:

This is where Disney simply opens the attraction and all lines including standby and FastPass+. Anyone can walk up and get in line and anyone can make a FastPass+ reservation in advance. This is old school and probably not something Disney would do at this point but it is on the table; barely. In this scenario, everyone and anyone can show up and try to get in line. This causes massive crowds and hours-long lines. 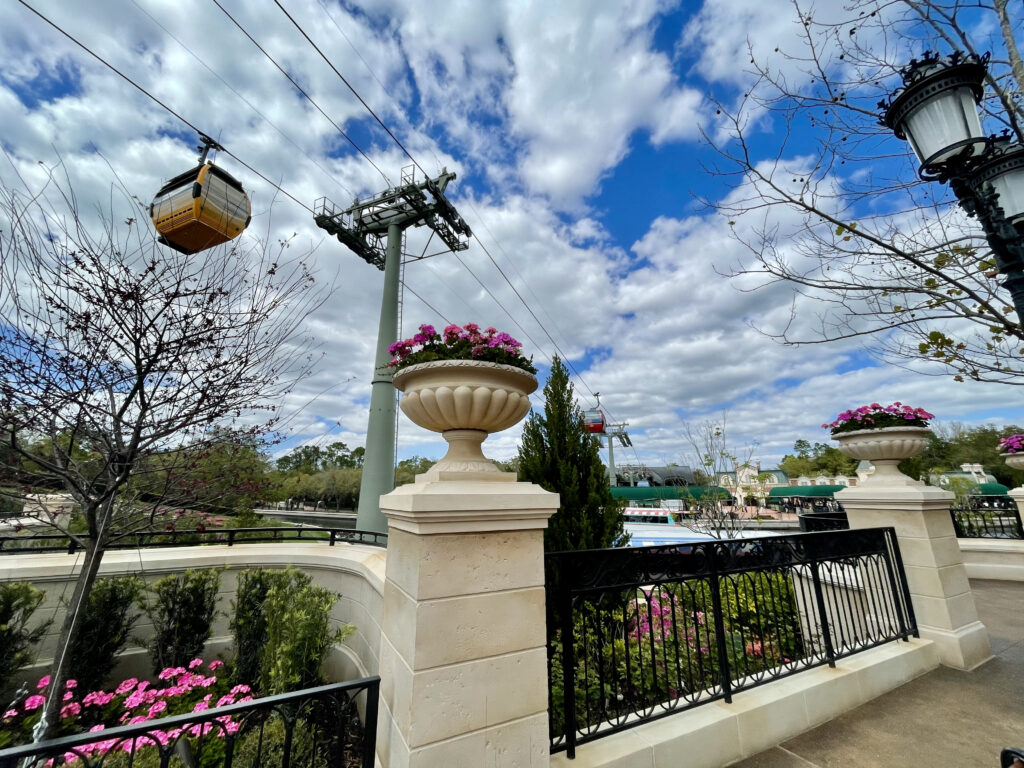 We don’t see this option playing out but Disney may only let guests who have made a FP reservation in advance to ride the new attraction. The only reason we don’t see this happening is because it’s an older version of the new way of queuing guests. In this scenario, most guests will understand that they cannot ride it without a reservation though there will be guests who knew nothing about the opening and try to ride it. Cast Members will create a “zone” where only guests with FP reservations can pass through.

This is the modern way of keeping crowds down and is more likely the way Disney will open Remy’s Ratatouille Adventure. It’s proven to be effective and fair for Disney and guests. It does require some work in the My Disney Experience app but it’s an easy learning curve. The downside to Virtual Queues is that it leaves a lot of people empty handed when they can’t get a spot in line. Rise of the Resistance does this everyday to guests and leaves them frustrated. What can we say? Not everyone gets to ride in this scenario but nothing is ever guaranteed at the parks.

Should I try and make plans around the opening?

If you’re a die-hard Disney fan and you have to experience this attraction first day, you should have started planning in January of 2021 😂 . In all seriousness though, hotels for that week are booked up. Park Pass Reservations, which at this time are still required, are starting to fade quickly. Magic Kingdom Park is already gone for the 1st. What we’re getting at is you’re going to be swimming upstream at this point to get the ideal vacation during this time.

If you don’t care about riding it first thing and you just want smaller crowds, plan to visit the parks in January 2022. By this time things will have calmed down, you’ll have a better understanding of what it takes to get on the attraction and COVID rules should be gone completely by this point. 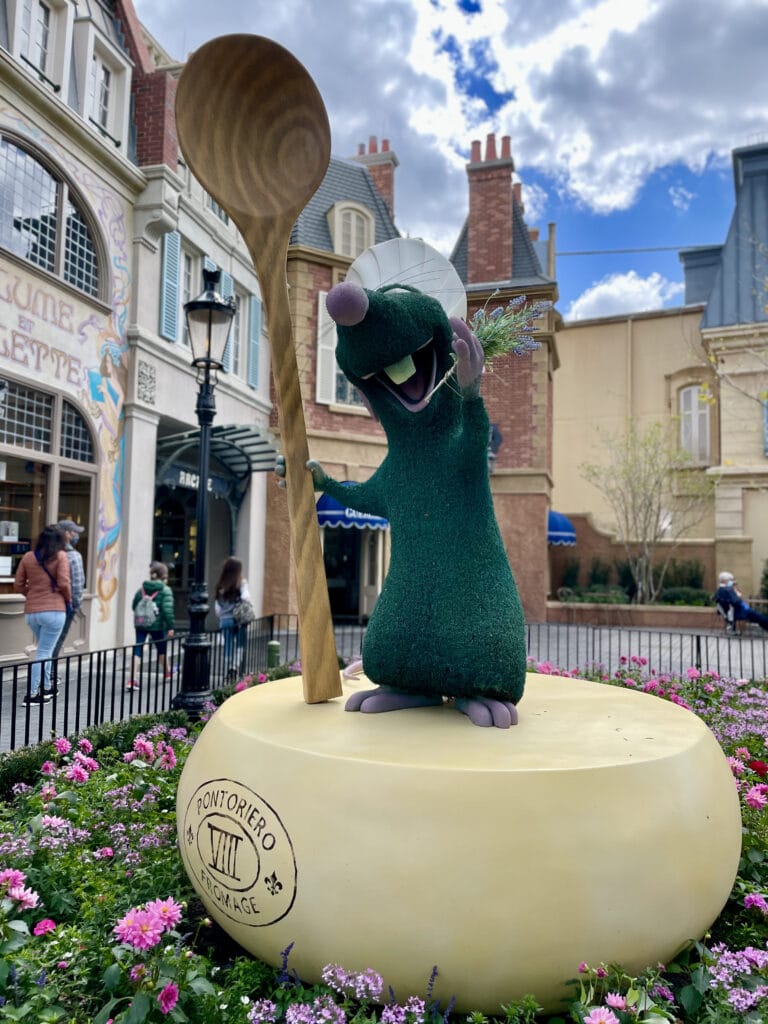 What’s the fastest way to get to Remy’s Ratatouille Adventure?

The fastest way to get to the ride from outside the park is to enter at the World Showcase entrance located between the France Pavilion and the UK Pavilion. This entrance is typically only utilized by guests staying at Epcot Resorts like The Boardwalk Inn & Villas, Disney’s Beach Club or Yacht Club Resorts or Swan and Dolphin hotels. Guests who take the Skyliner to Epcot will also end up at this entrance.

It is open for anyone to use and this will come into play later. For now, just know that this entrance is ideal and will put you within a 2 minute walk to Remy. This whole idea is based on rope drop at the park, or in other words, how to beat the crowd to this attraction once the park opens.

Guests who come in from the front of Epcot will have a long race to the attraction. It will take you a good 10 minutes to get there. So in this scenario, the front entrance is not the best option. Guests who are staying near Epcot will have the advantage unless you can even the odds. They way we would do this is by taking an Uber or LYFT from our hotel to Disney’s Beach Club Resort, walk out the back and directly to the World Showcase entrance. You’d have to do this early in the morning though.

Here’s some visuals to see what we’re talking about: 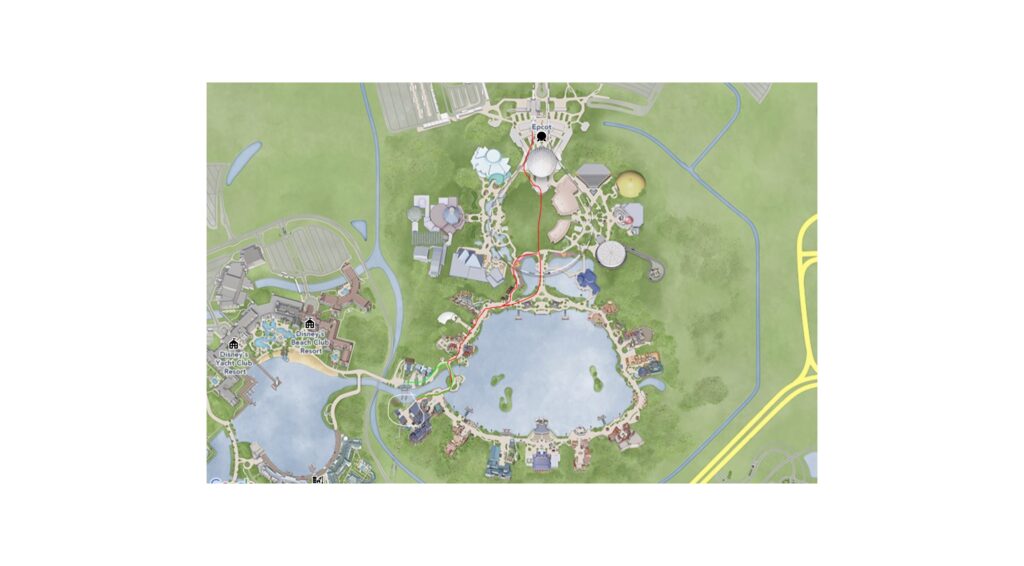 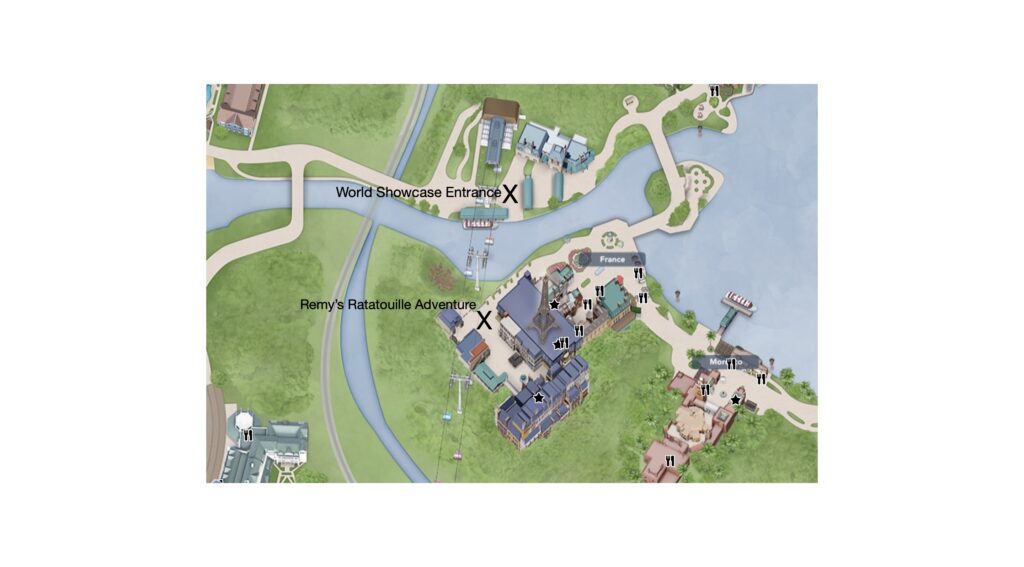 What time should I arrive at the park to ride?

If it’s a free for all, we would get there at least 2 hours early. If it ends up being a FastPass+ or Virtual Queue scenario, it won’t matter because you’ll have to follow your assigned time. If you’re talking about the park in general, an hour early is fine. If you have one of the first groups to get on, this is when we would show up. There’s a decent chance you’ll have to provide proof of your reservation in order to get close to the attraction.

Can a I do a VIP Tour to get access to the ride without a FastPass+ reservation?

Typically, if the attraction is running just on FastPass+ and a standby line, then yes you can. If it is a virtual queue scenario, then no. You will be required to get a group before getting on the ride. No details have been given by the VIP team yet as to how Oct. 1st, 2021 will work. They currently only book 60 days out. More info to come on this though. It’s a great idea if you have the money to spend on one.

Be sure to join our newsletter below for more details on Remy’s Ratatouille Adventure coming soon to Epcot!