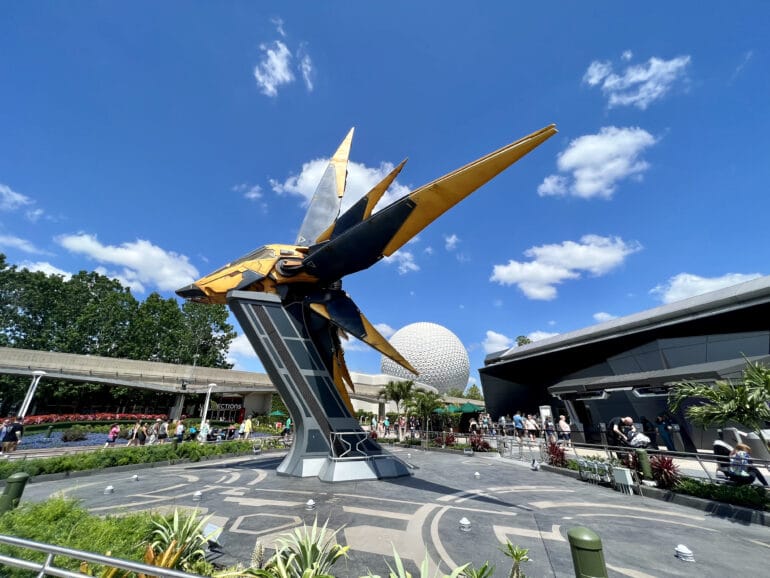 After taunting guests with its construction walls for close to five years, Guardians of the Galaxy: Cosmic Rewind is finally ready to welcome Marvel fans at Epcot. While the ride doesn’t officially open until May 27, we were fortunate to experience the attraction during a preview event, and we’re here to tell you all about it.

So, strap in as we share all the details on the brand-new Guardians of the Galaxy ride, Epcot’s first roller coaster. (Sorry, folks. With the exception of the first half of our review, if you’re looking for something without spoilers, this isn’t it.)

A Spoiler-Free Crash Course on Guardians of the Galaxy: Cosmic Rewind 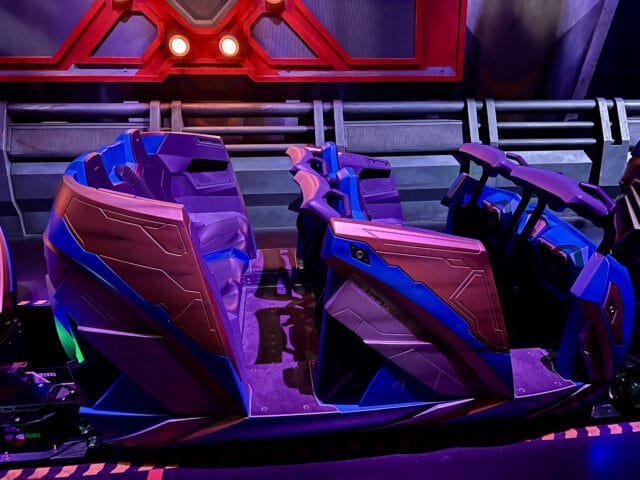 But, before we get to our review of this Marvel-ous attraction (AKA the spoilery bits), let’s find out if the ride is right for you and your crew. Read on for the basics about this brand-spanking new attraction, including height restrictions, possible complications and more.

Where is the Guardians of the Galaxy ride going in Epcot?

Guardians of the Galaxy: Cosmic Rewind is part of the new Wonders of Xandar Pavilion in Epcot’s World Discovery neighborhood, previously Future World East. Housed in what was once the Universe of Energy Pavilion, this Epcot roller coaster is sure to be a “gate-buster,” drawing in Marvel fans (and heavy crowds) thanks to its convenient location just a short walk from the park’s main entrance.

Is the Epcot Guardians of the Galaxy ride kid-friendly?

For some kids, definitely! Disney calls Guardians of the Galaxy: Cosmic Rewind a “family-thrill attraction” in the vein of Seven Dwarfs Mine Train or Big Thunder Mountain Railroad or Magic Kingdom. But, just how intense is it?

On a scale of Slinky Dog Dash (Hollywood Studios’ Toy Story-inspired kiddie coaster) to Expedition Everest (Animal Kingdom’s rollicking roller coaster with a backward drop), we’d say it falls closer to the latter. From the thrilling reverse launch to zooming and spinning through the darkness of outer space, it’s sure to be a hit with teens, pre-teens and especially adventurous kiddos. 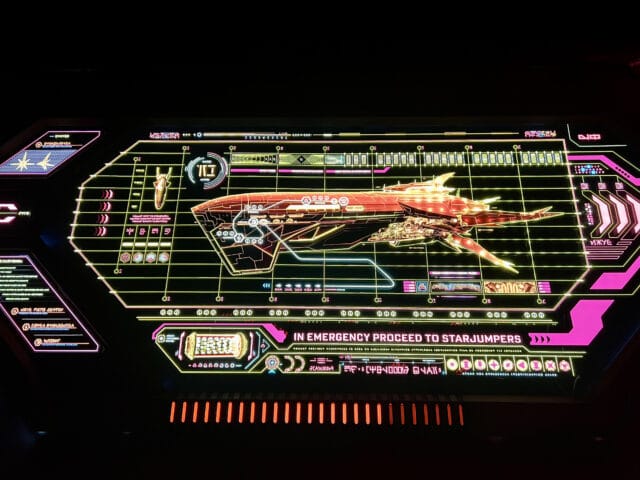 However, keep in mind that, unlike Epcot’s other newer attraction, Remy’s Ratatouille Adventure, the Guardians of the Galaxy ride does have a height requirement of at least 42 inches (107cm). Of course, should you be traveling with a child who is too small or scared to ride, you can always use the Rider Switch service.

Is Guardians of the Galaxy: Cosmic Rewind size-inclusive?

If you’ve ever found yourself squeezing into an uncomfortably small attraction vehicle or, worse yet, experienced the disappointment of being too big to ride altogether, then Guardians of the Galaxy: Cosmic Rewind is for you. Touting wide seats, individual lap bars and lots of legroom, Epcot’s new Guardians of the Galaxy ride has been designed to accommodate guests of all shapes and sizes.

Does Cosmic Rewind have drops?

Compared to a couple of its Disney World coaster compatriots, particularly Rock ‘n’ Roller Coaster at Hollywood Studios and Animal Kingdom’s Expedition Everest, which dazzle riders with barrel rolls and big drops, Guardians of the Galaxy: Cosmic Rewind keeps things rather mellow. While you can expect some small drops à la Space Mountain, the ride overall is incredibly smooth, often making you feel as if you’re weightlessly soaring through space. 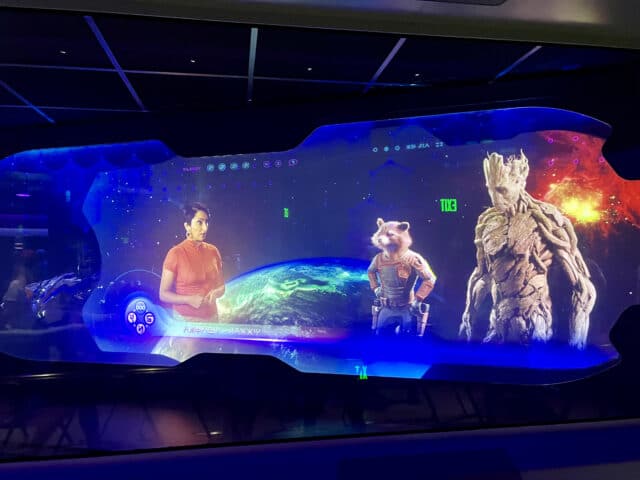 Who should skip the Guardians of the Galaxy roller coaster?

Sadly, there are some folks who may want to give Cosmic Rewind a pass.

Due to the Guardians of the Galaxy coaster’s design – namely its toweringly immersive projection screens, ride vehicles that spin to face the action and relative darkness – those who are especially prone to motion sickness might want to think twice before riding.

As someone who doesn’t typically get queasy on rides, especially roller coasters, even I walked away with my head spinning and stomach burbling. Needless to say, you have been warned. If you’re not sure of your stomach but you’d like to give it a try, let a Cast Member know that you’d like to be placed in one of the middle cars in a left-sided seat as they pull fewer G-forces.

Flashing lights also feature prominently throughout the attraction, including both the pre-show and actual ride. So, if you suffer from photosensitive epilepsy or are easily disoriented by bright, flashing lights, Disney’s new Guardians of the Galaxy ride might not be for you.

Blasting Off on Guardians of the Galaxy: Cosmic Rewind

All right, Marvel fans, if you’re steering clear of spoilers, here’s your cue. For everyone else, let’s get into the glorious details.

At least for the time being, the only way to experience the Guardians of the Galaxy coaster is by securing a reservation with either the free virtual queue system or paying for an Individual Lightning Lane Selection. No regular standby line will be available upon the Guardians of the Galaxy ride opening at Epcot. The virtual queue/future standby entrance is located to the front left of the pavilion, while Lightning Lane riders enter from the righthand side. 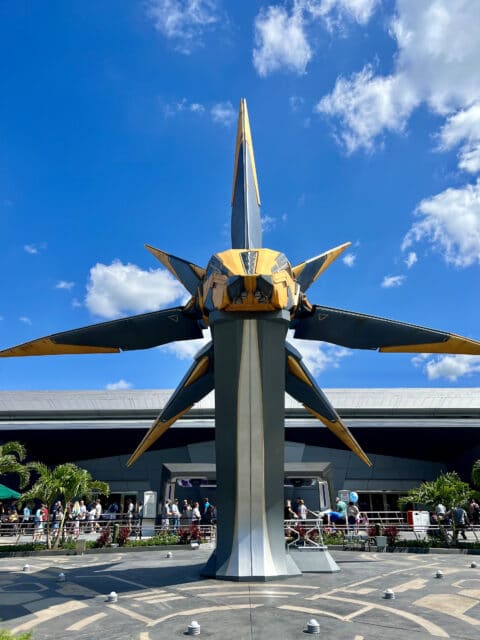 Like most attractions at Disney World, Cosmic Rewind begins before you even get on the ride. The coaster is part of the Wonders of Xandar Pavilion, Epcot’s first-ever “Other-World Showcase” Pavilion. So, similar to sipping margaritas and learning about Día de Muertos at the Mexico Pavilion, the Wonders of Xandar Pavilion showcases Xandarian history and culture – minus the eating and drinking around the world, of course. Just keep an eye out for the full-sized Xandarian starship.

Before you get on your Starjumper, you’ll first wind your way through the queue, consisting of four different sections: the Galaxarium, Xandar Gallery, Welcome Center and Phase Chamber. It’s the first two rooms that feel the most at home in Epcot. Epcotian, if you will (i.e., filled with Edutainment elements).

The heart of the pavilion and the first place you see is the Galaxarium, a planetarium-like room featuring a 30-minute presentation narrated by Worldmind, a Xandarian supercomputer that is the keeper of the species’ collective knowledge, culture, history and memory. (No need to take notes, folks. There won’t be a test at the end of the ride.)

Depending on how long you’re in the Galaxarium (likely no more than 15 to 20 minutes, or less if you’re using the Lightning Lane), you’ll get to hear about pieces of our shared history, including everything from the Big Bang to Xandar’s home galaxy, Andromeda. After all, as Carl Sagan so eloquently put it, we’re all “made of starstuff.”

And, did you know that we’ve already tried to make contact with any alien life forms that might exist in outer space? It’s true! Just keep your ears open for mention of The Golden Record and its still-running front-row seat into deep space on NASA’s Voyager interstellar probe. Next, the Epcot vibes continue in the Xandar Gallery. This is where your education into the Xandarians really begins.

Here you’ll gaze upon a fun collection of displays, such as scale models of their starships to an incredibly detailed model of one of the planet’s cities. It’s this last exhibit that’s most fitting, as anyone who knows about Walt Disney’s love of city planning or has ogled one of the many models sprinkled throughout the parks can attest. 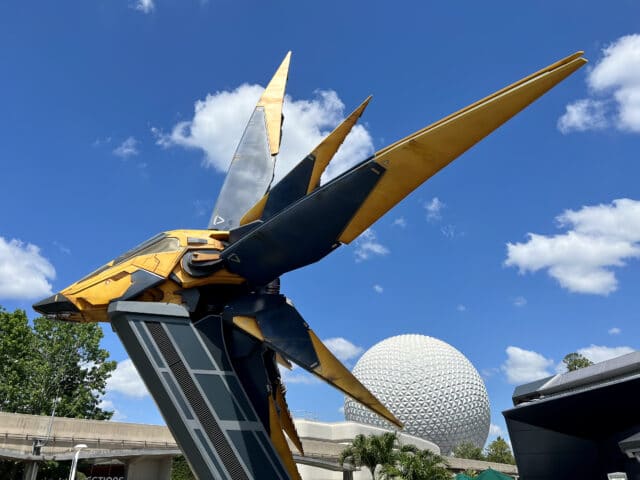 This is also where you’ll get your first glimpse of the Guardians. You see, it turns out that the good people of Xandar like watching a lighthearted news show in the AM, too. Xandarians – they’re just like us! On “Good Morning Xandar,” the Guardians of the Galaxy stop by to talk about their heroic deeds and, for Star-Lord (AKA Peter Quill), reminisce about the Universe of Energy dinosaurs and the Epcot of yesteryear.

The last two parts of the queue before you get on the coaster, basically large holding areas with pre-shows, are all about setting up the story for the ride. In the Welcome Center, the “we’re all in this together” theme continues with Nova Prime Irani Rael, played once more by Glenn Close. There, we learn that Xandar received our message of communication and, lucky us, they’re here to share their vast knowledge of technology with us.

Best of all, we’re about to get a sneak peek of that very same technology: the Cosmic Generator, a wormhole-opening machine capable of opening pathways through time and space. But first, before we launch into the stratosphere, an appearance by Terry Crews (AKA Centurion Tal Marik and Commander of the Starcharter. Then, it’s off to the Phase Chamber to be teleported from Epcot to the Starcharter Nova Cruiser hovering above Earth.

The Set-Up (AKA “And Then Something Bad Happened”)

Similar to Star Wars: Rise of the Resistance, this is when the action really starts. And like many attractions at Disney, it follows a familiar trope. Something goes terribly wrong. This time, the Xandarian’s treasured Cosmic Generator goes missing mid-demonstration, courtesy of the ride’s big bad: Eson, an evil Celestial. His goal? To go back in time to the Big Bang and stop the creation of Earth.

Of course, it’s up to you and the other Terrans on your Starjumper to save the day – and the galaxy. For your roughly three-minute voyage through the stars, you’ll set out on Disney’s very first Omnicoaster, with ride vehicles capable of rotating 360 degrees, starting with a thrilling reverse launch.

But, don’t expect your car to go spinning like a teacup on the Mad Tea Party. Rather, the Imagineers have programmed the vehicle to turn so you never miss a moment of the action. So, as you and the Guardians give chase to Eson and the Cosmic Generator, your attention will be directed towards whatever screen is displaying the ensuing space battle.

Sadly, there is no way to choose which song you get – it’s all up to chance! In other words, if there’s a tune you’d like to try, be prepared to pony up the cash for an Individual Lightning Lane to ride again.

So, what did we think of Epcot’s Guardians of the Galaxy ride? Imagine Space Mountain meets Rock ‘n’ Roller Coaster meets a wild mouse coaster, but a whole heckuva lot smoother.

This is easily one of the attraction’s strong suits. Between the darkness of the ride, the track’s silky-smooth turns and the action bouncing around from screen to screen, it truly evokes the sensation of soaring through space. Add in the killer soundtrack and glittering stars, and the whole thing feels like a strangely dark roller disco.

Having said that, as fun as it is, it doesn’t crack the list of our favorite attractions at Walt Disney World. (*cough* Avatar Flight of Passage *cough*) The epic battle playing out on the screens feels too fast-paced at times, and we often felt like we were missing things. Call us old-fashioned but blame it on the projections. Having physical props and sets provides a grounding element that makes a scene feel more immersive, and we’re really missing that on this ride.

However, other than that, it certainly accomplishes what it needs to do. Able to push through approximately 2,500 to 2,800 riders each hour, it’s what we call a “crowd eater.” This should help to free things up elsewhere around Epcot. It also strikes a balance between the new intellectual property in the parks and nostalgic Easter eggs for Epcot devotees. Oh, and the Guardians save the day, of course.

All in all, much like the songs on the ride’s soundtrack, Guardians of the Galaxy: Cosmic Rewind is destined to be a hit whether you’re a roller coaster fanatic, wannabe superhero or Disney World first-timer.

Have you tried the new Epcot roller coaster yet? Are you looking forward to blasting off with the Guardians sometime in the future? Let us know in the comments! Then, learn how to save some cash for that Individual Lightning Lane access with our discounted Disney World tickets.